It's been awhile since I've recapped a bunch of random meals, so sorry for the long post. But I'll keep the words short and start with dessert because I'm an eat-dessert-as-an-appetizer kind of girl.

Imagine Vegan Cafe has started making fresh doughnuts for select Sunday brunches! They're super good, and sometimes, if you're lucky, you can get one that's still hot from the fryer. This one was covered in chocolate frosting! Doughnuts are my favorite thing in the whole wide world, y'all. 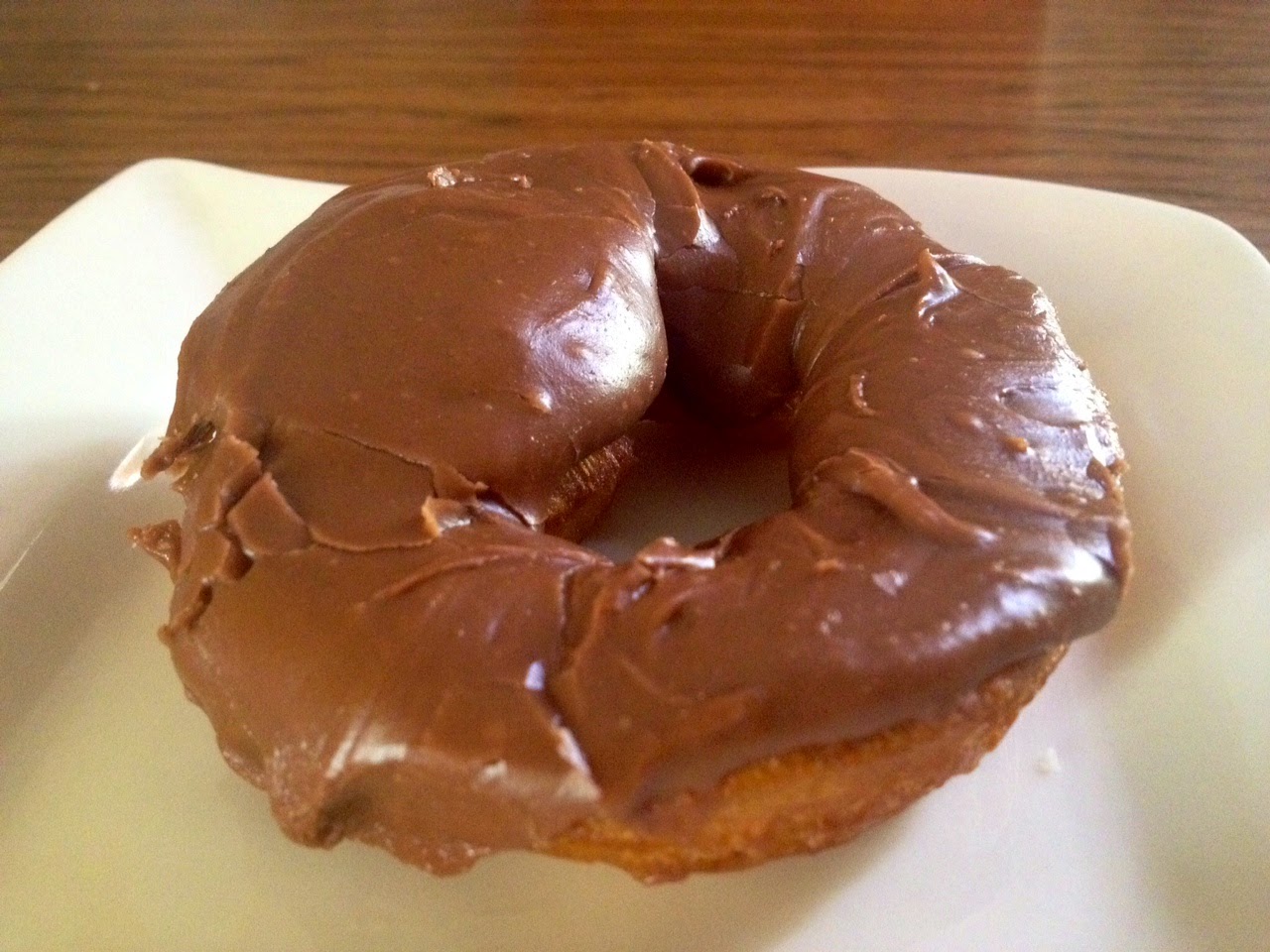 Stephanie, who makes most of the desserts for Imagine (except for the doughnuts), made these Caramel-Dipped Chocolate Chip Whoopie Pies last week. She saved one for me! OMG! 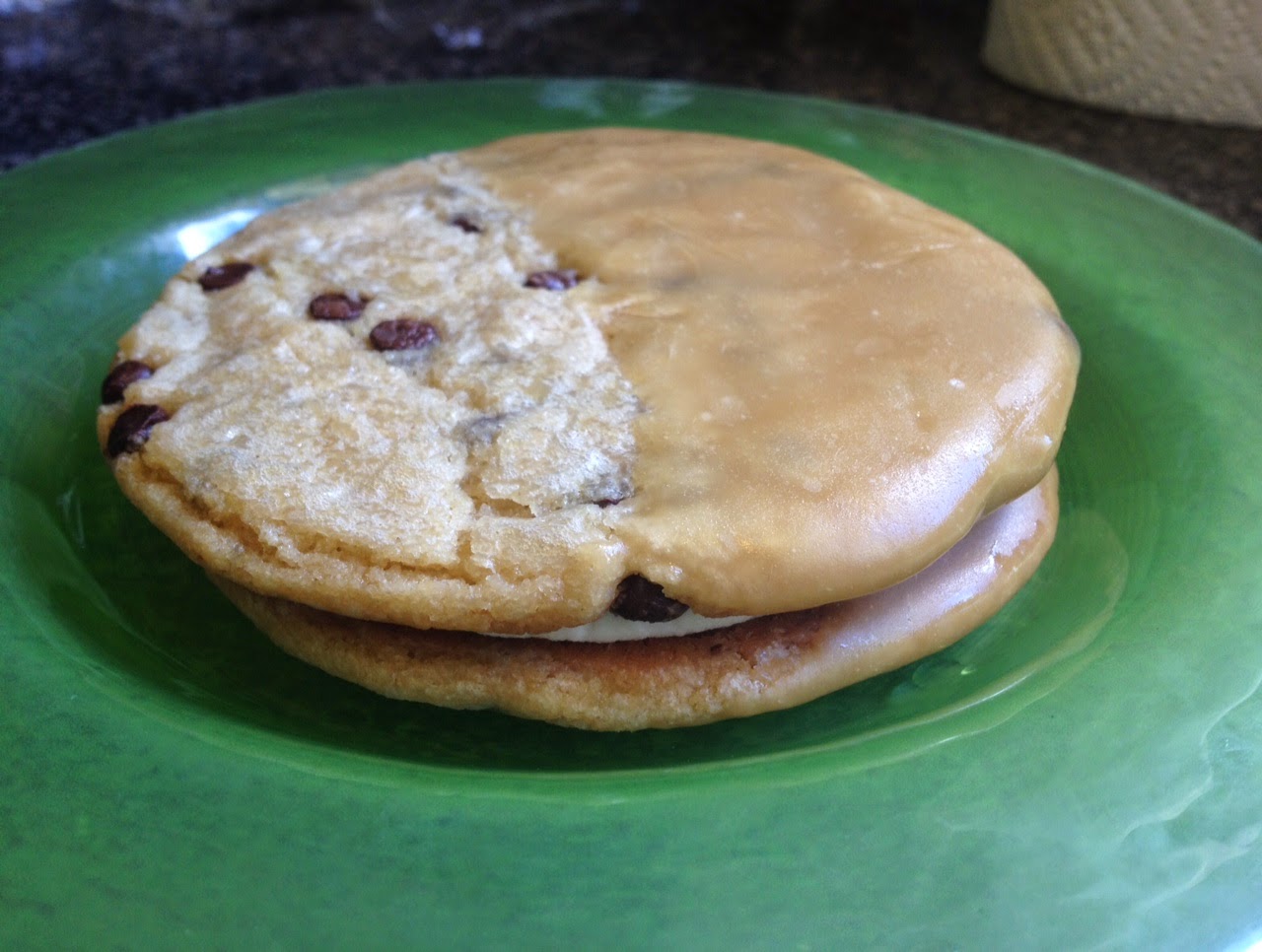 Last week was our friend Pam's birthday, and she wanted to have dinner at Imagine. Stephanie tried to order the fried "chicken" drumstix, but they were out. Instead, they were trying out these new BBQ "Chicken" Drumstix. And I had to try them! They served three to a plate, and I got sides of their white cheddar mac and green beans. But my photo in the restaurant was all dark, so I snapped one of my leftovers the next day. That chicken was insane! It tasted just like BBQ chicken from the grill! 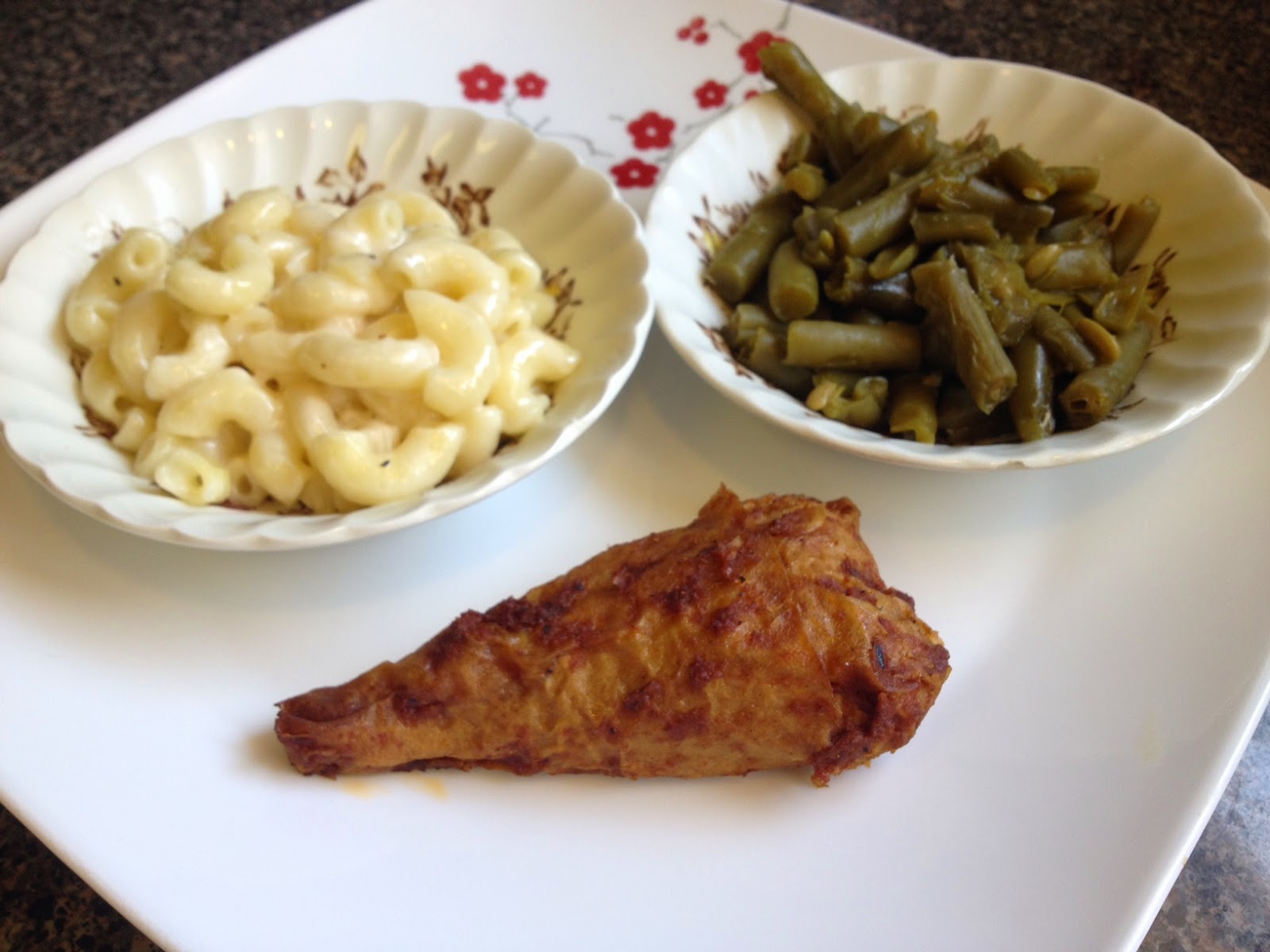 I ordered this Strawberry Soup last weekend at Imagine during brunch. It's a fresh and light yogurt-like soup. Nice change from my usual fried foods at Imagine. 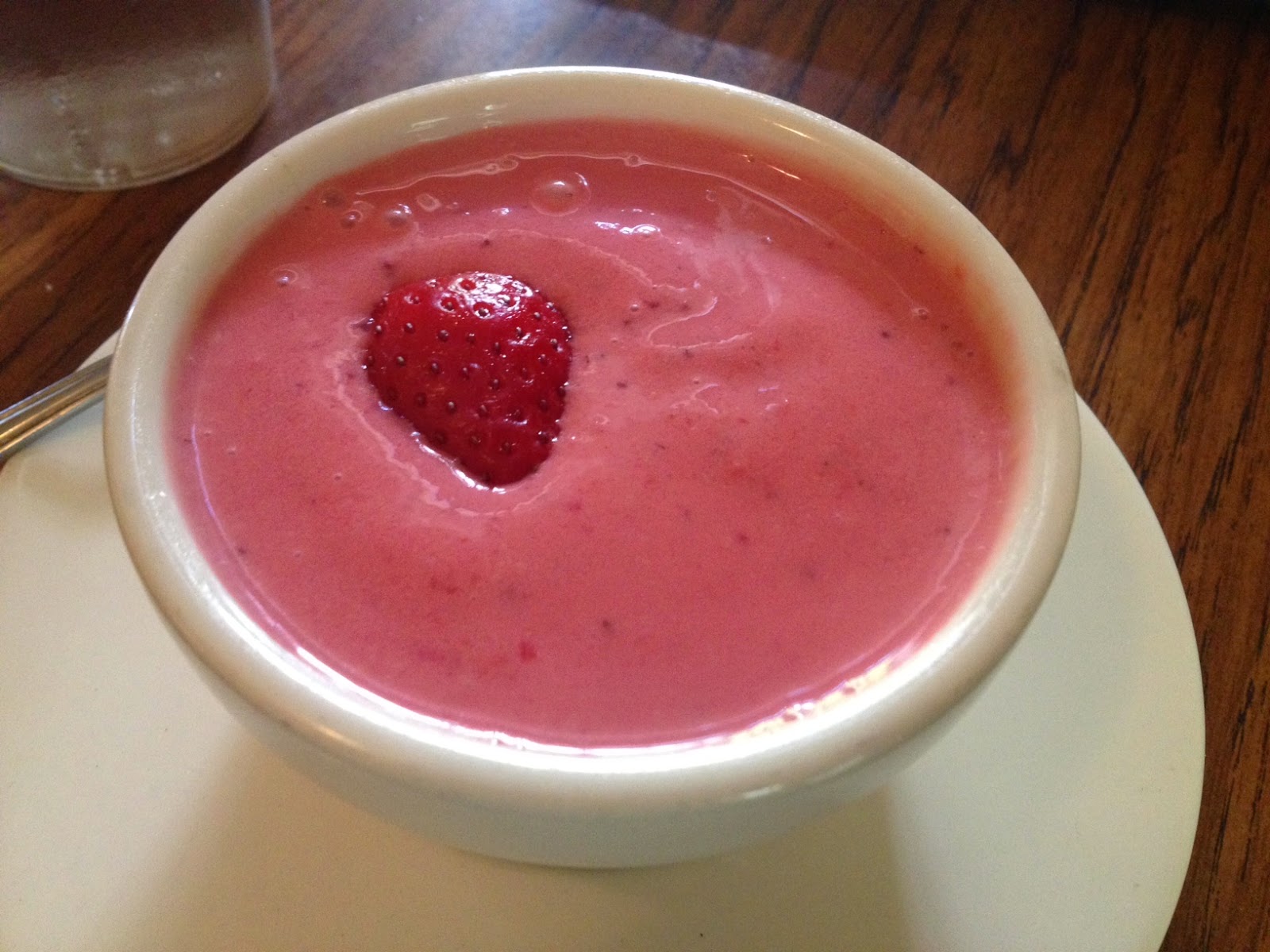 But of course I had to balance out the healthy soup with these Sausage Piggies In Blankets with Maple Syrup. So good! 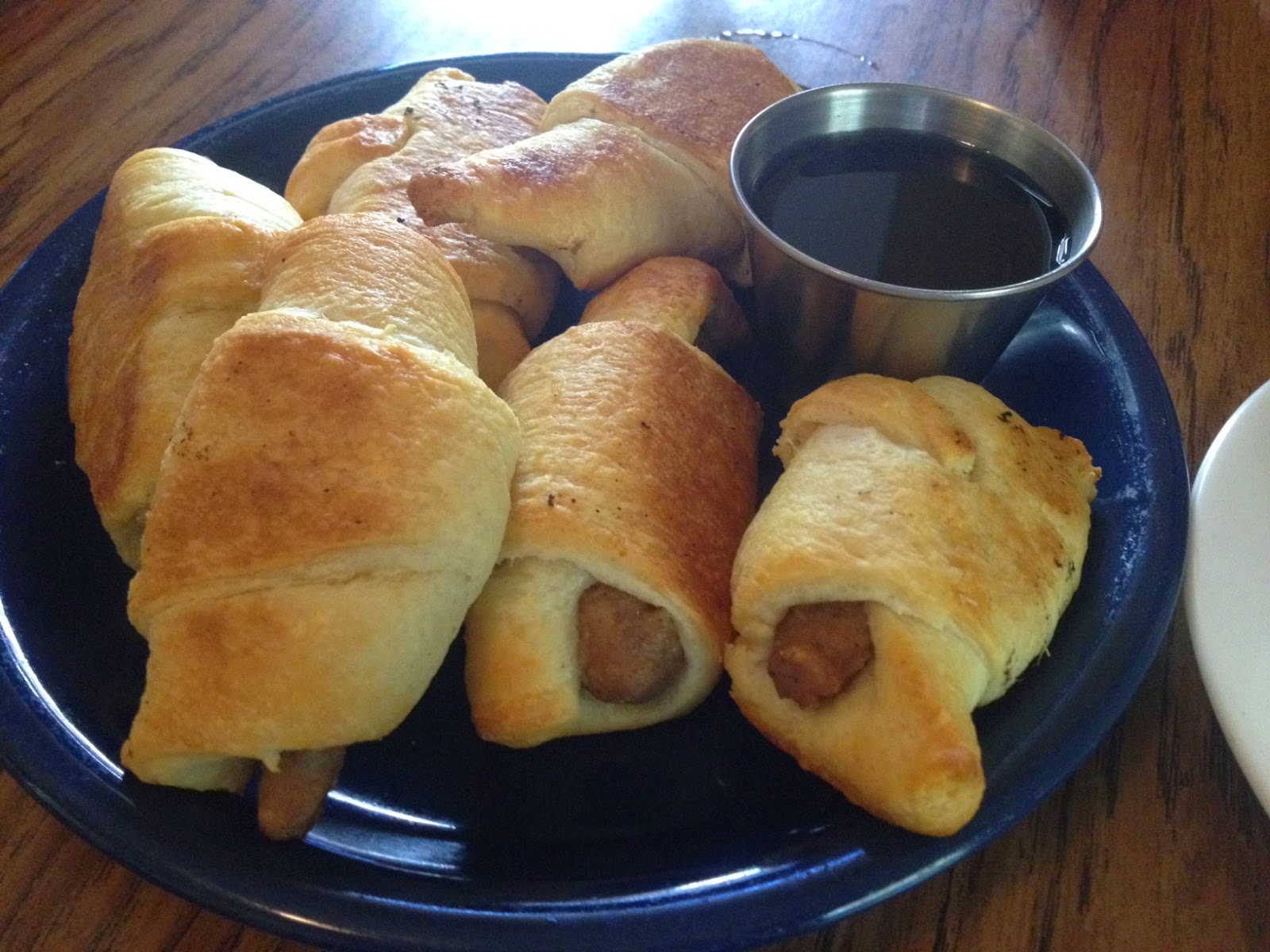 Speaking of breakfast, would you believe most of this meal was a frozen dinner? Yep, I caught some Amy's Tofu Scramble and Hash Brown meals on manager's special at Kroger for $1.50! I added sprouted grain toast with pepper jelly, cherry tomatoes, and Upton's Seitan Bacon. 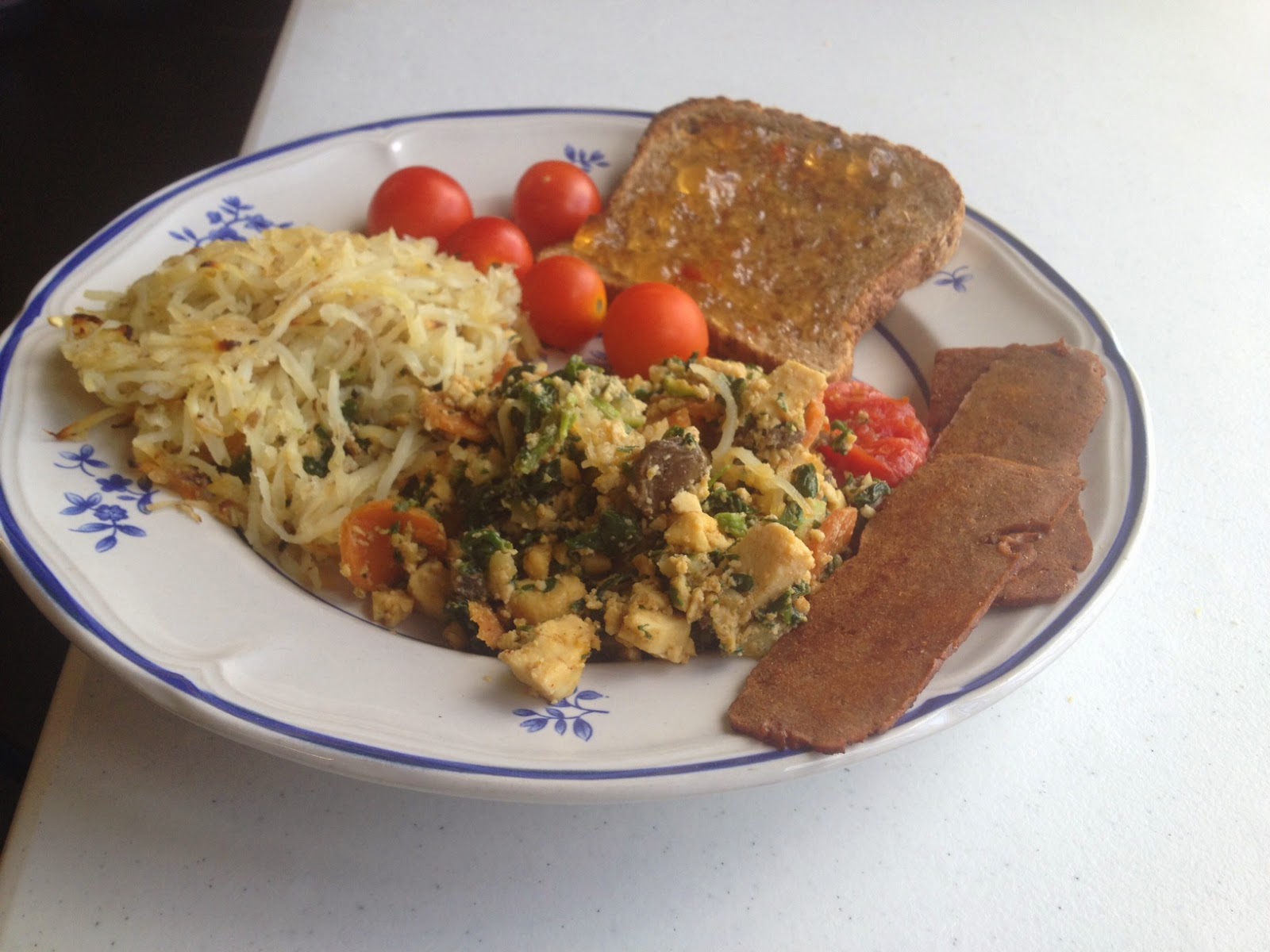 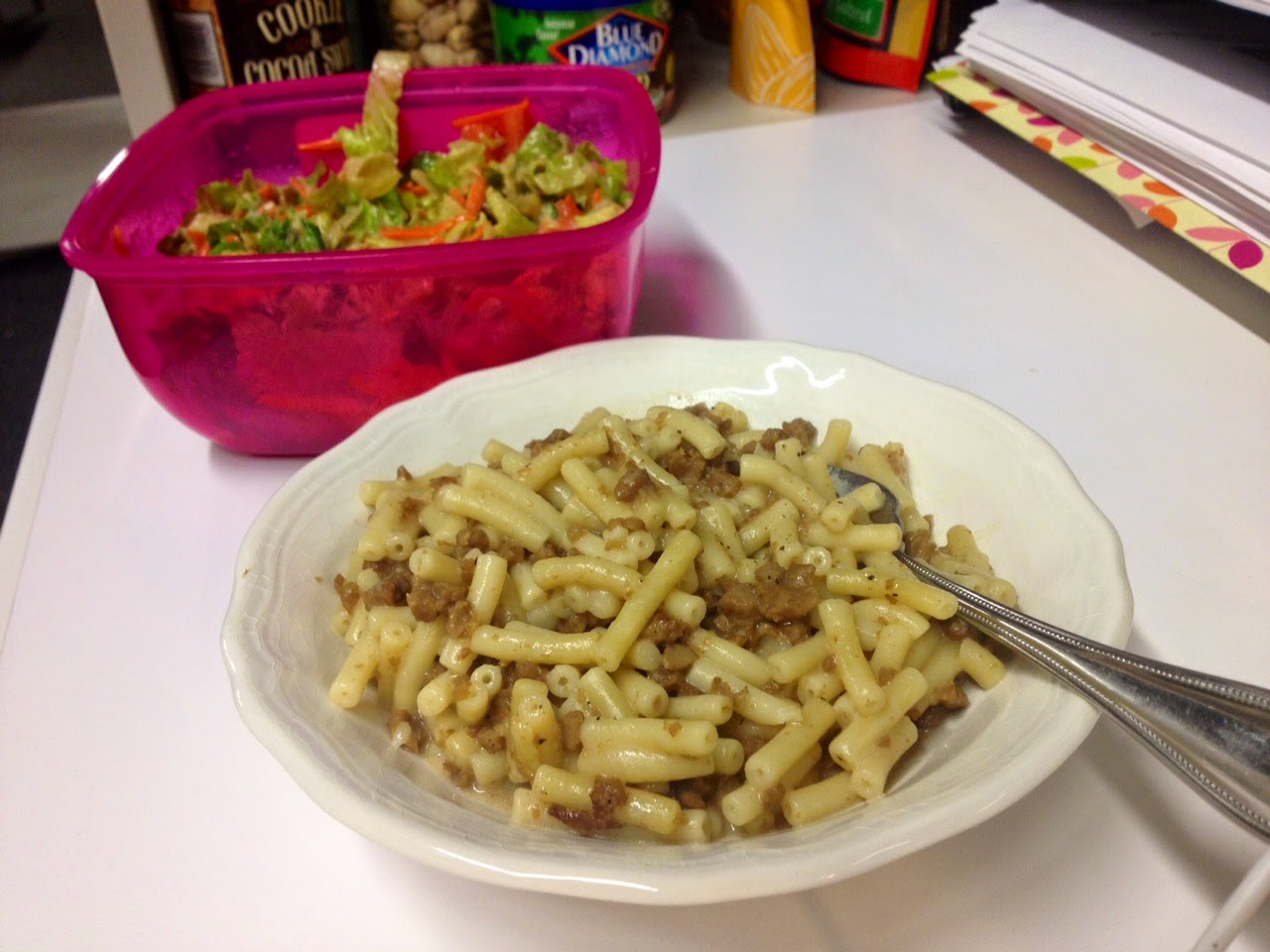 Got a major sandwich craving last week, so I grabbed some Tofurky Peppered Deli Slices and ate them on sprouted grain with curry-mayo (made with curry powder and Just Mayo), avocado, and tomato. The chips are Kettle's Maple Bacon Chips. 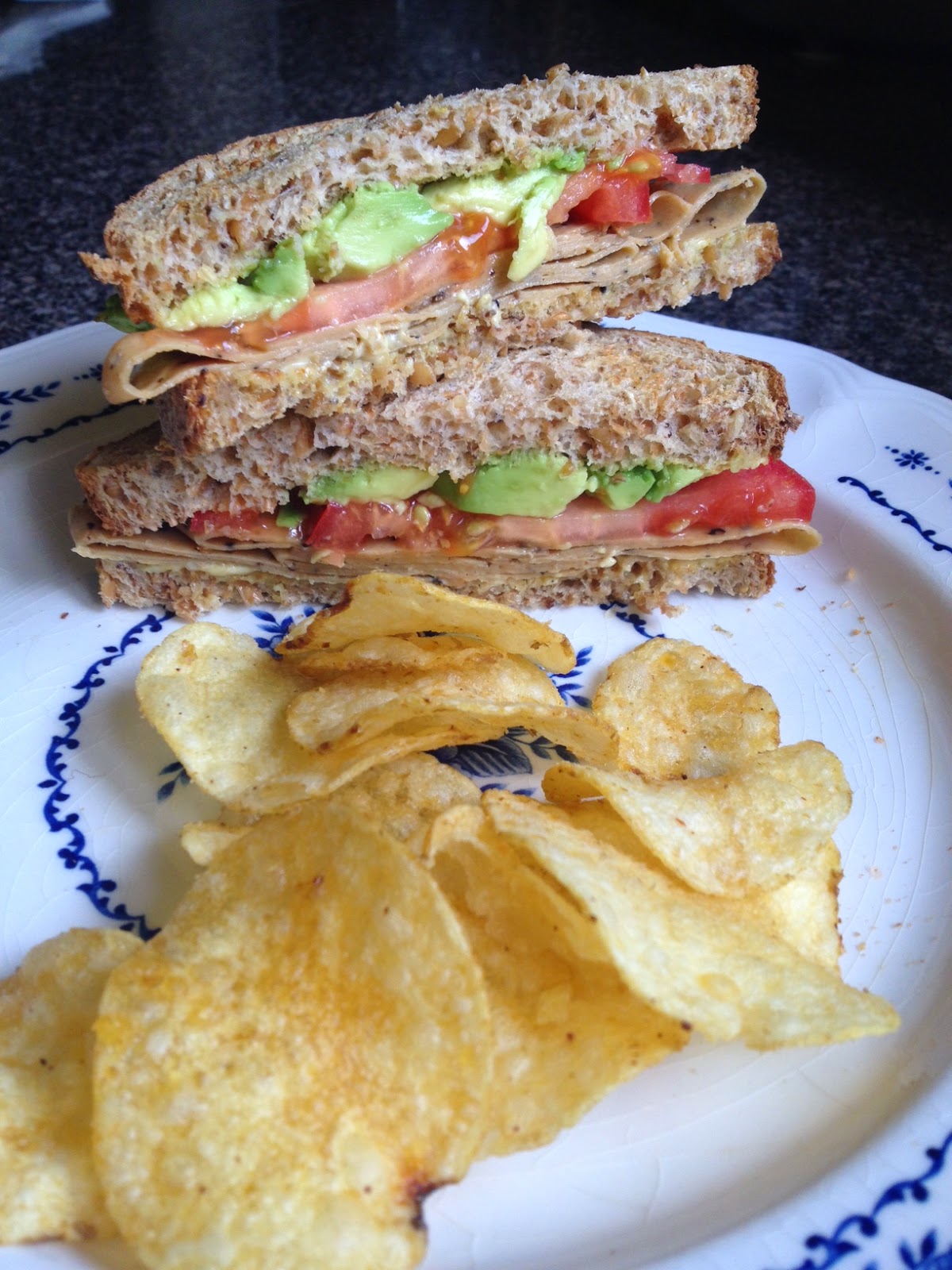 For the equinox a few weeks back, I made some Apple Spice Muffins. But they were just okay. The recipe didn't call for any sugar at all, and I knew that seemed weird. But instead of adding sugar, I had some fit of craziness and decided to add stevia instead. Stevia is good in, say, tea but not so much in muffins. 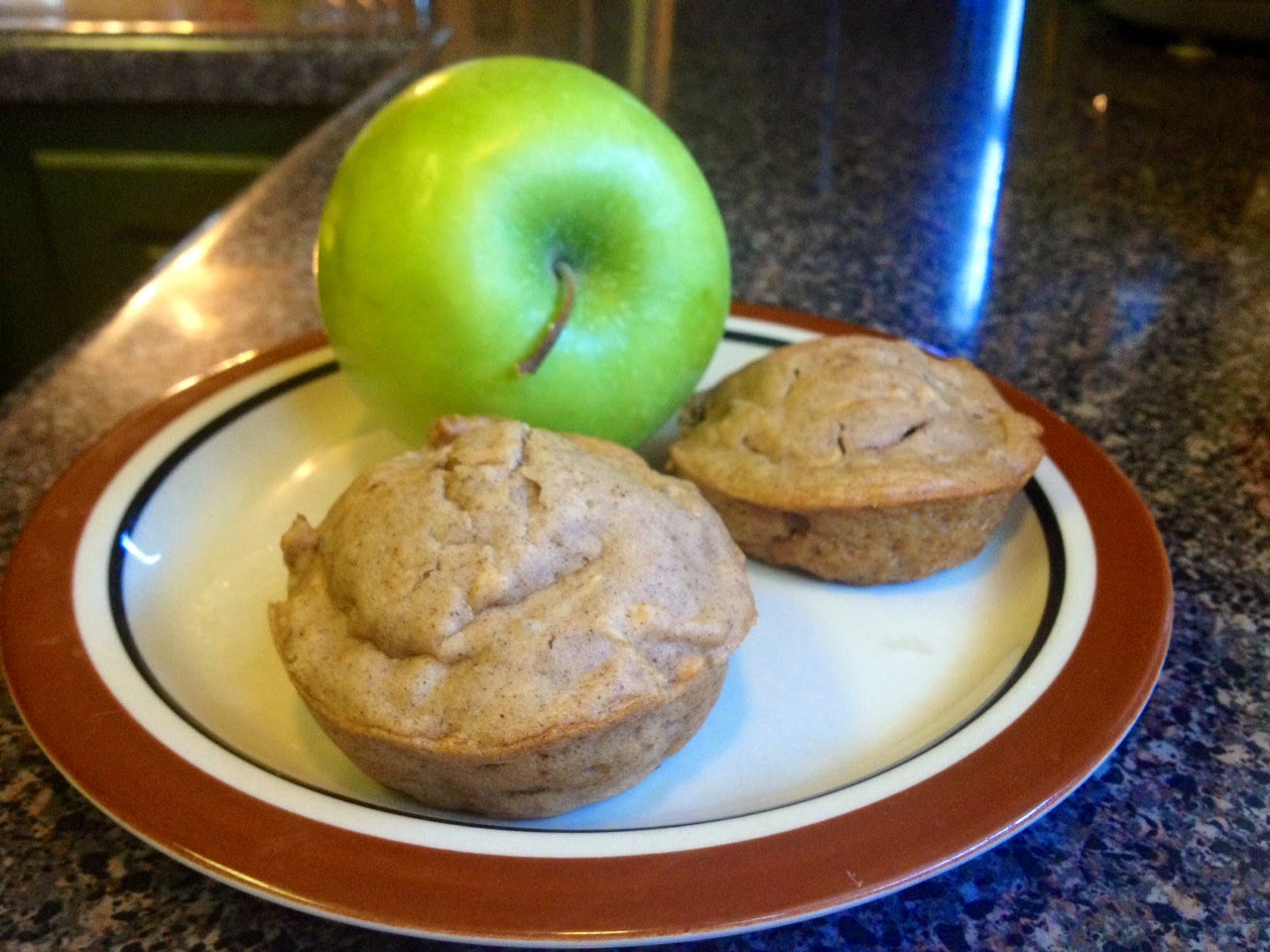 And here lately, I've been on a taco kick. Here's a dish I meant to make during my Mofo Pantry Raid because many of the ingredients came from my pantry — Neat Nut Meat Tacos on Garden of Eatin' Red Hot Blues Shells with Avocado, Tomato, Salsa, and Collard Green Kimchi. On the side is my Dirty South Rice (a fusion of Cajun dirty rice and classic Spanish rice) from Cookin' Crunk. I grabbed the taco shells on manager's special at Kroger awhile back, and my dad ordered me the Neat meat from Vegan Essentials (LOVE THAT STUFF!). The Collard Green Kimchi was a Memphis Farmers Market score from local vegan-friendly chef Ki Kitchen. 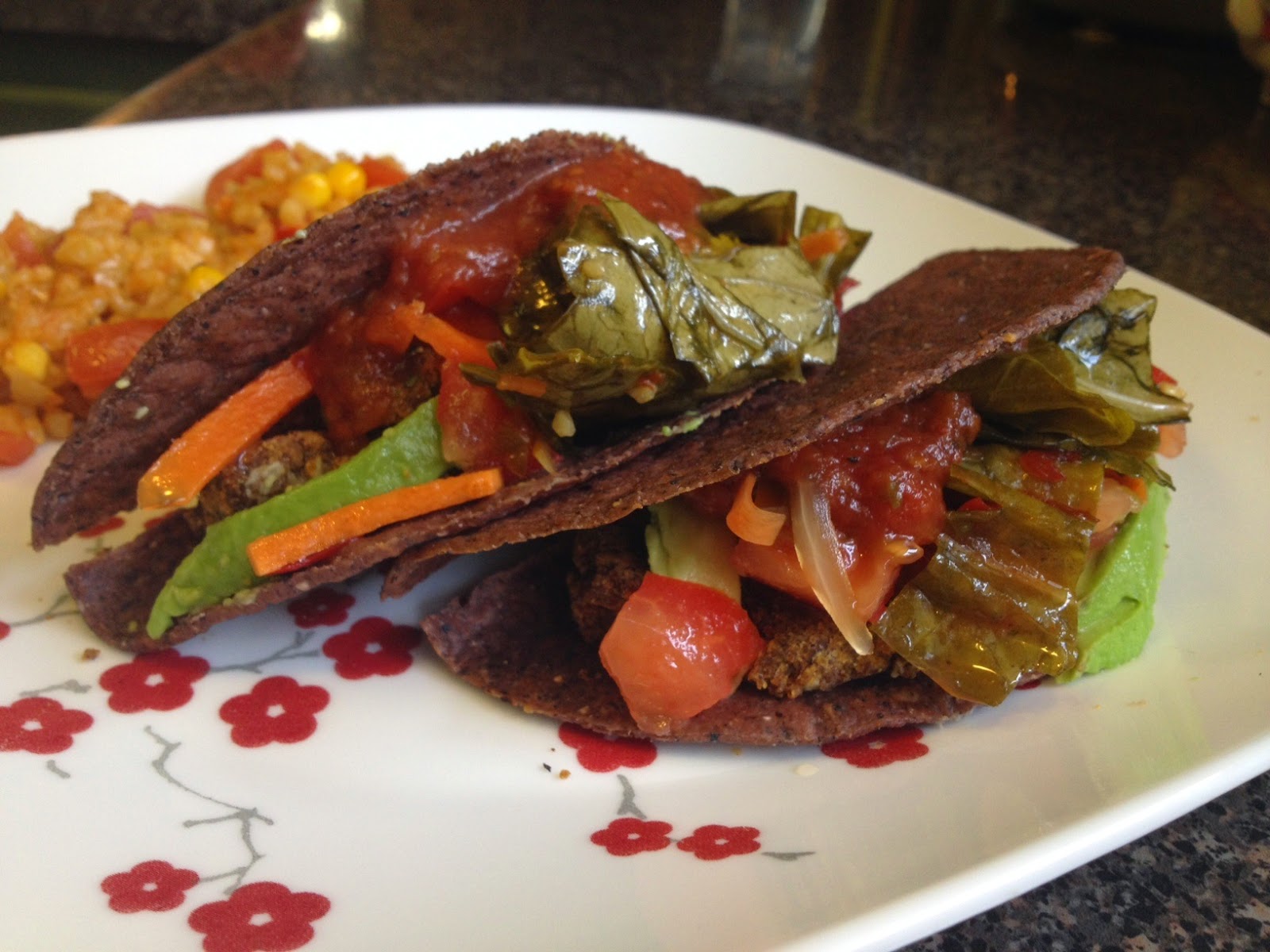 Speaking of tacos, my friend Greg and I went to a "Beer. Tacos. Abortion." party last weekend. These "beer & taco challenge" house parties are the pro-choice movement's version of the ALS Ice Bucket Challenge, and they're happening all over the country. Most, including this one, are fund-raisers for assistance funds for low-income women who need abortions. And it just so happens that Tennessee has an aggressive campaign to fight some anti-choice legislation that would basically allow the Tennessee General Assembly the constitutional right to pass intense restrictions on abortion in the state. That's Amendment One, and if you're a pro-choice Tennessean (or if you simply don't want government interfering in your private medical decisions), you need to vote no! 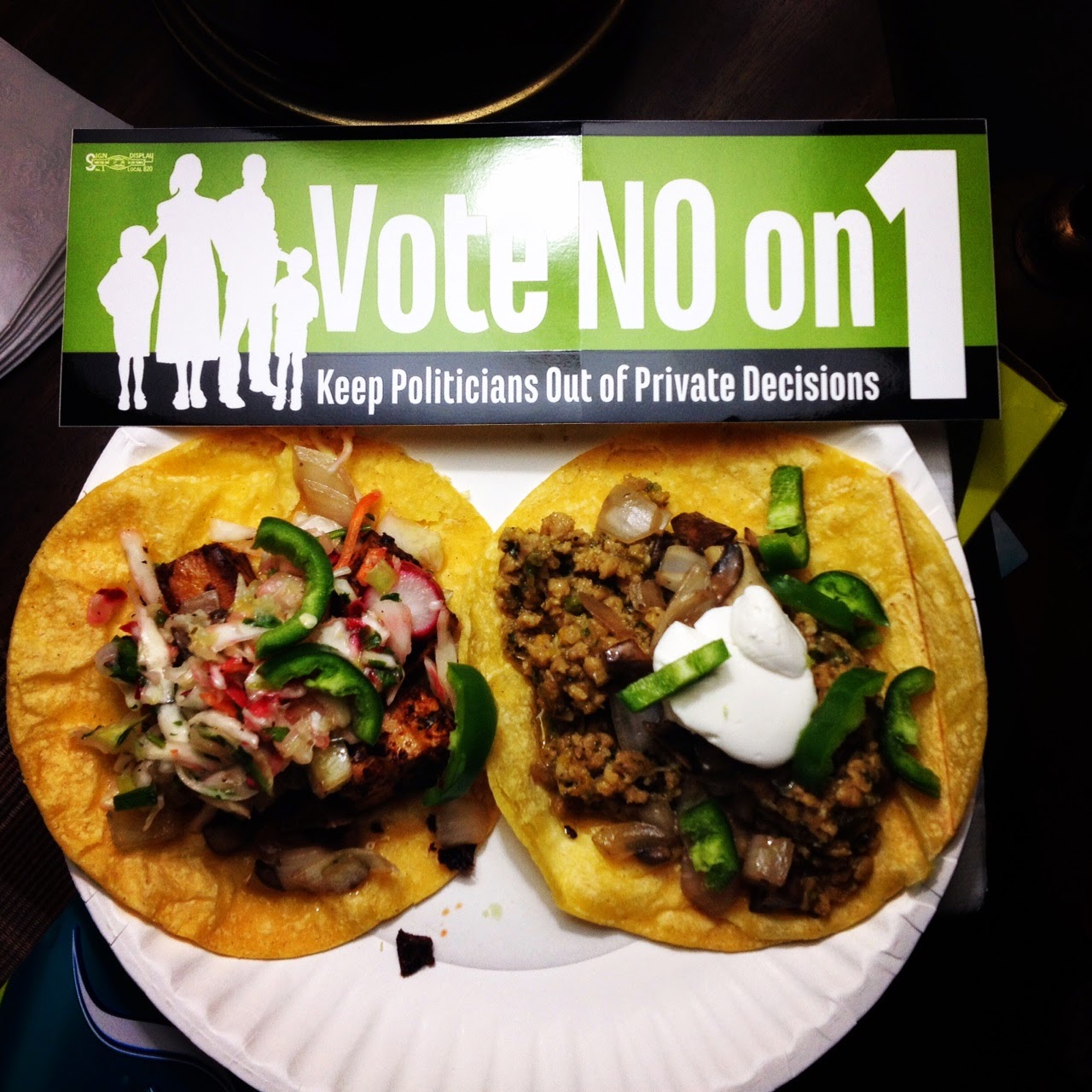 Anyway, about those tacos. The hosts made both vegan and meat-based tacos, but it seemed like most everyone at the party was going for the vegan ones — Chipotle Tofu Taco with Slaw and Seitan Mojito Taco with Tofutti Sour Cream!
Posted by Bianca at 11:21 PM

[ Smiles ] Bianca, you always eat a lovely choice of vegan food; lucky you!

You have the best food!

I definitely want that doughnut and that strawberry soup.

I like the little bowls for your Imagine leftovers.