We've been doing Memphis Vegan Drinks once a month for more than a year now. But you might have noticed (or maybe you didn't) that we'd never held an event at Imagine Vegan Cafe, Memphis' all-vegan comfort food cafe. Imagine, as anyone who reads this blog at least once a week knows, is basically my favorite place in the world. So why wouldn't I schedule a Drinks meetup there?

Because, until about a month ago, they didn't sell alcohol! You see, Imagine had a beer license for their old location a couple years ago, prior to the founding of Memphis Vegan Drinks. But when they moved down the street to where they are now, they lost that license. Those beer licenses don't carry over to new addresses in Memphis, and owner Kristie didn't want to go through the whole licensing process all over again. So they took a booze break. They did start selling cocktail mixes for Sunday brunch with free shots of liquor. But no regular booze sales.

Well, the beer is back at Imagine! So to celebrate, we had Vegan Drinks there tonight. Cheers! 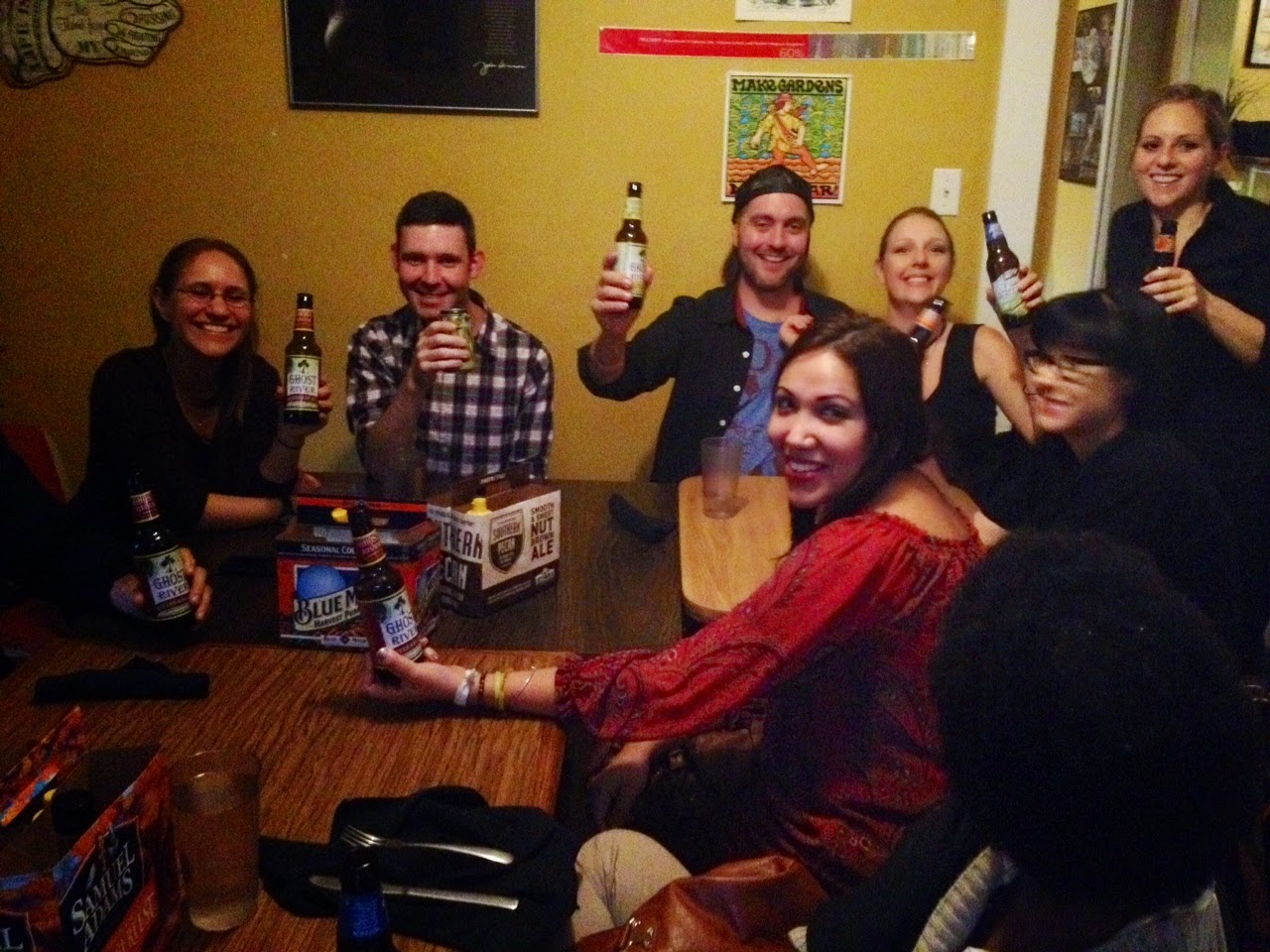 And the rest of the table! Couldn't fit everyone into one shot. We had a nice turnout tonight. 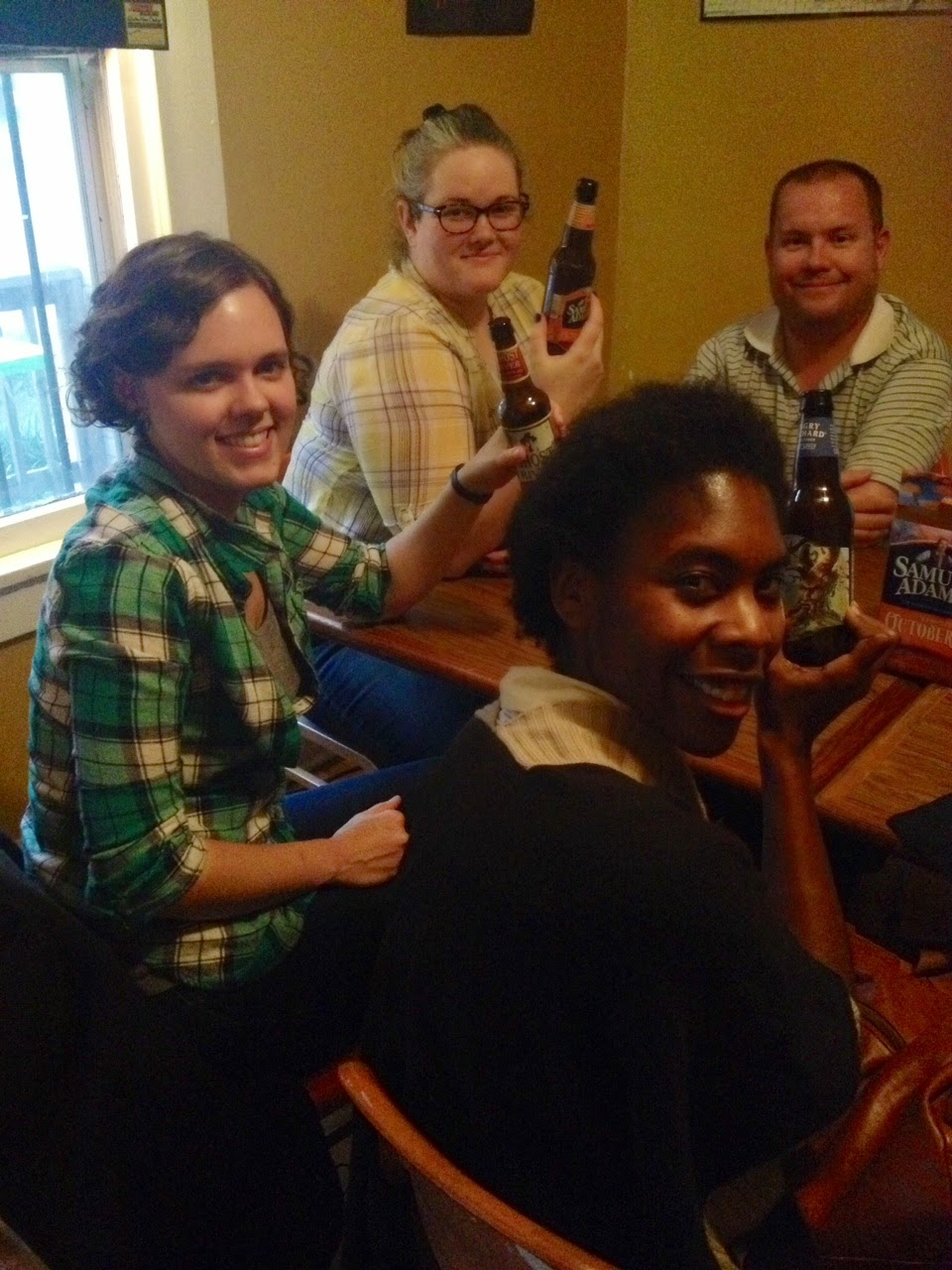 I opted to stick with locally brewed beer, so I started with the Ghost River Riverbank Red. Ghost River is the original Memphis craft brewery. They were making good beer years before the craft beer scene exploded here, but they just recently started bottling Riverbank Red. Previously, it could only be found on tap in bars. 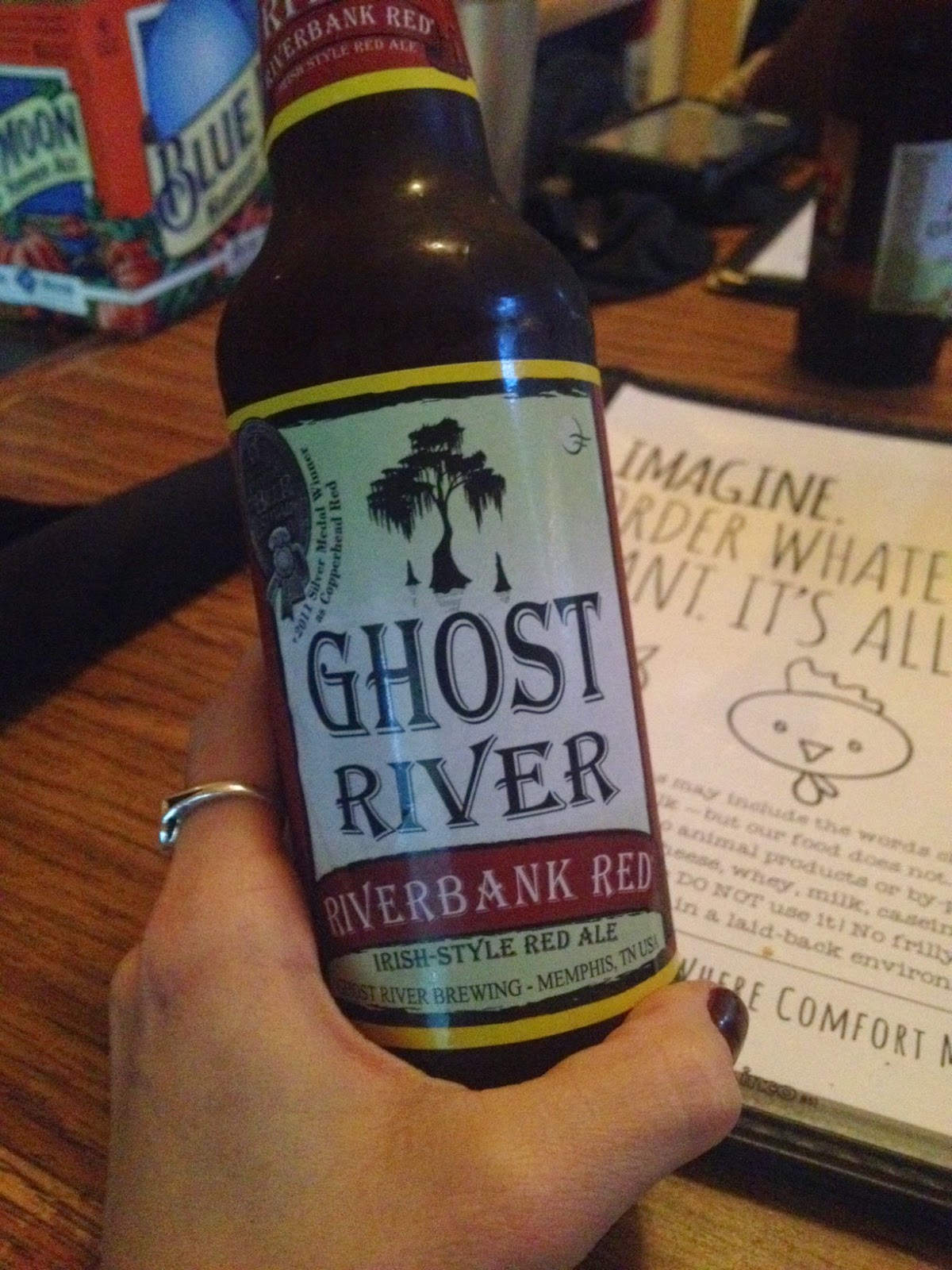 And Wiseacre Brewing Co. is more of a newcomer, but they make some awesome beers. And they definitely have the best can artwork. I love the Wiseacre Tiny Bomb. 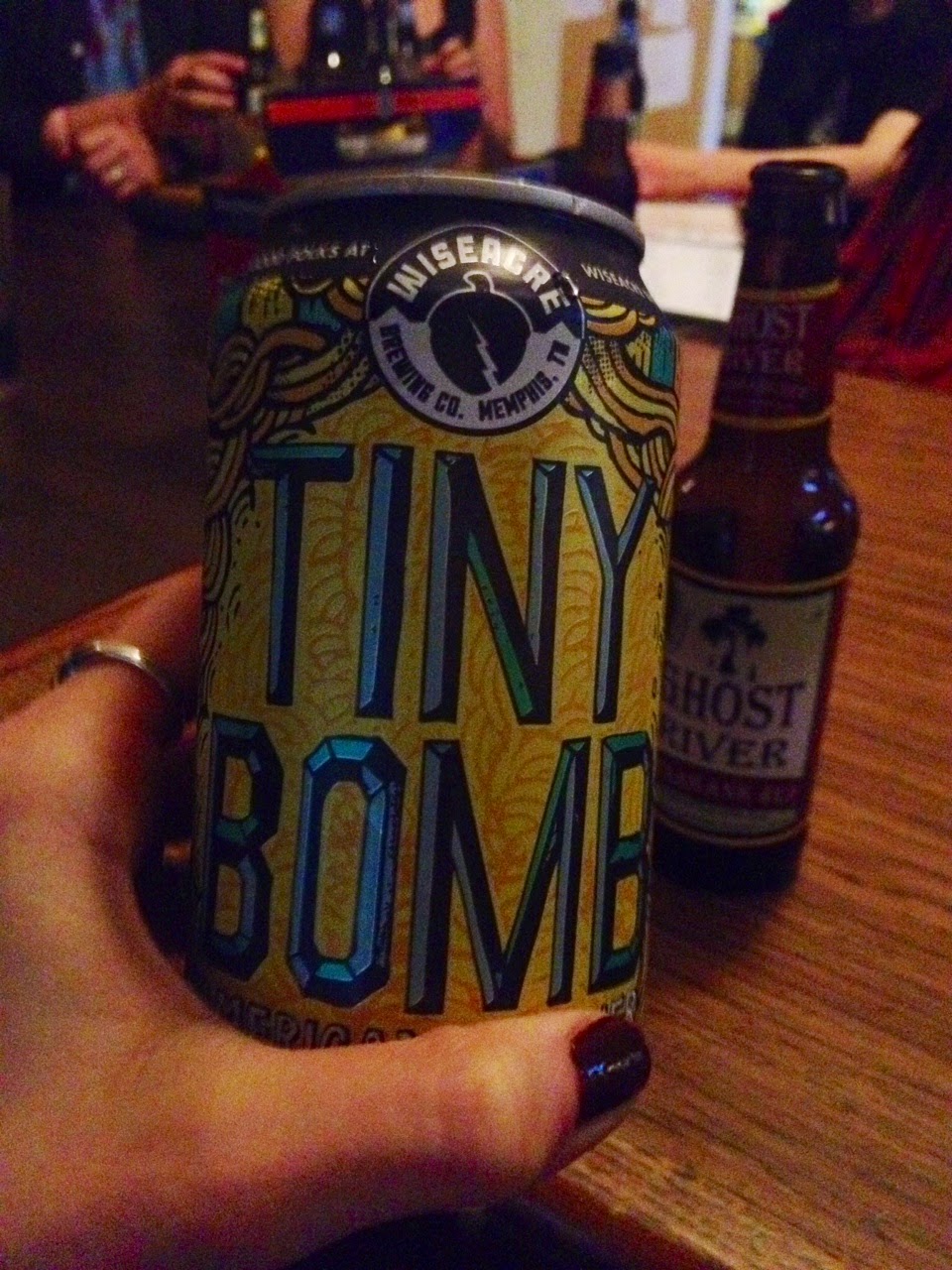 I usually take photographs of everyone's food and drinks. But we all ordered beer since that's all Imagine has. Y'all know what bottles look like. And I feel like I've photographed (and posted about) nearly every dish at Imagine at some point or another, so I wasn't being all crazy and sticking my camera phone into people's plates this time.

Yes, I said "camera phone." Deal with it.

Anyway, I will show you what I ordered — Jerk Chicken Sandwich with Brown-Sugared Carrots. This has vegan chicken breast topped with pineapple rings and a spicy, creamy jerk mayo. And the carrots are divine. They remind me of school lunch carrots. Comfort food! 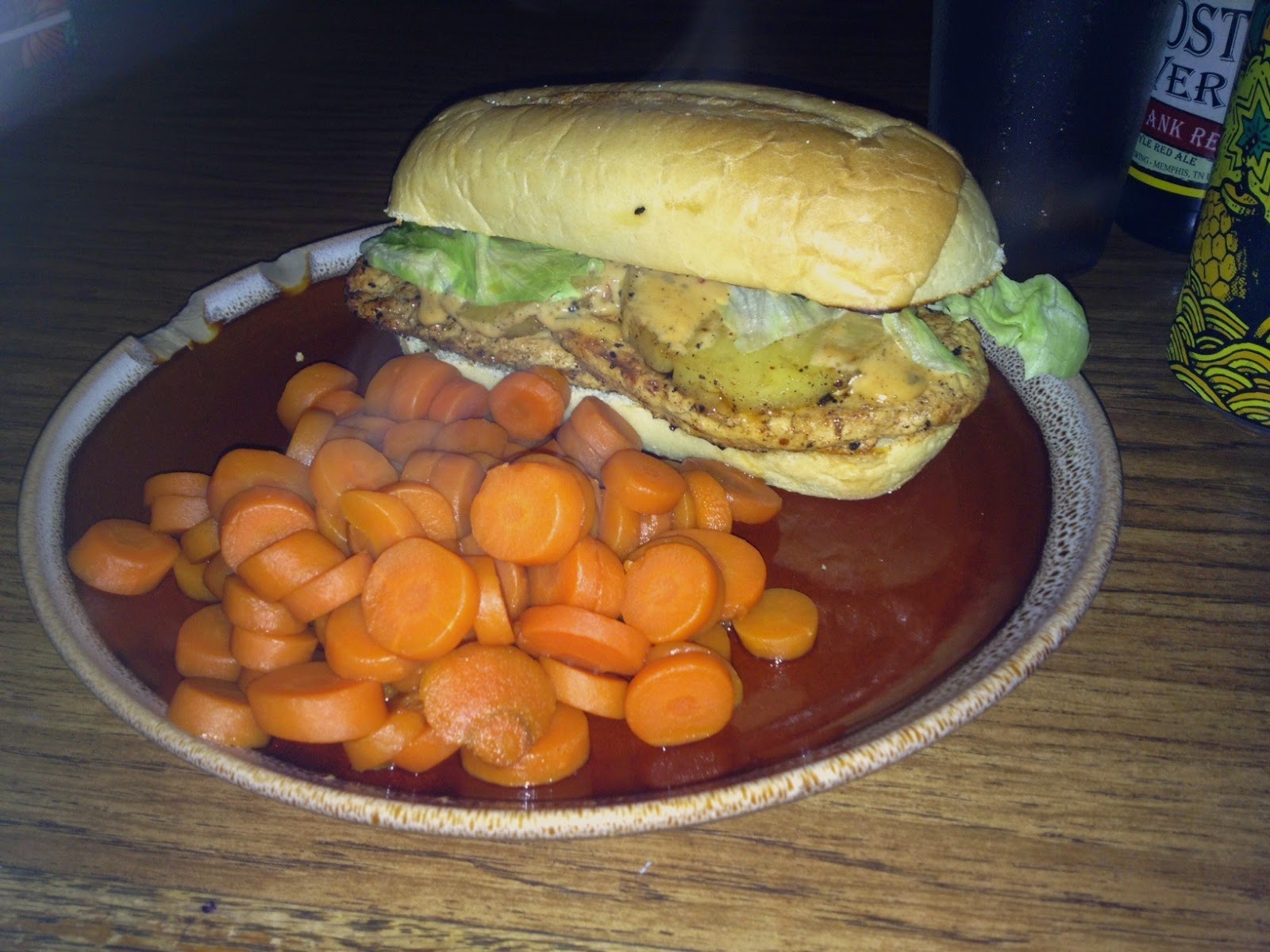 I'll also show you what Richard (Stephanie's husband) ate because it was totally off the menu and unorthodox — Vegan Sausage Patties, Hush Puppies, and French Fries. Yep, fried carbs and fake meat. It looked delicious. By the way, Richard is totally flipping off the camera phone. 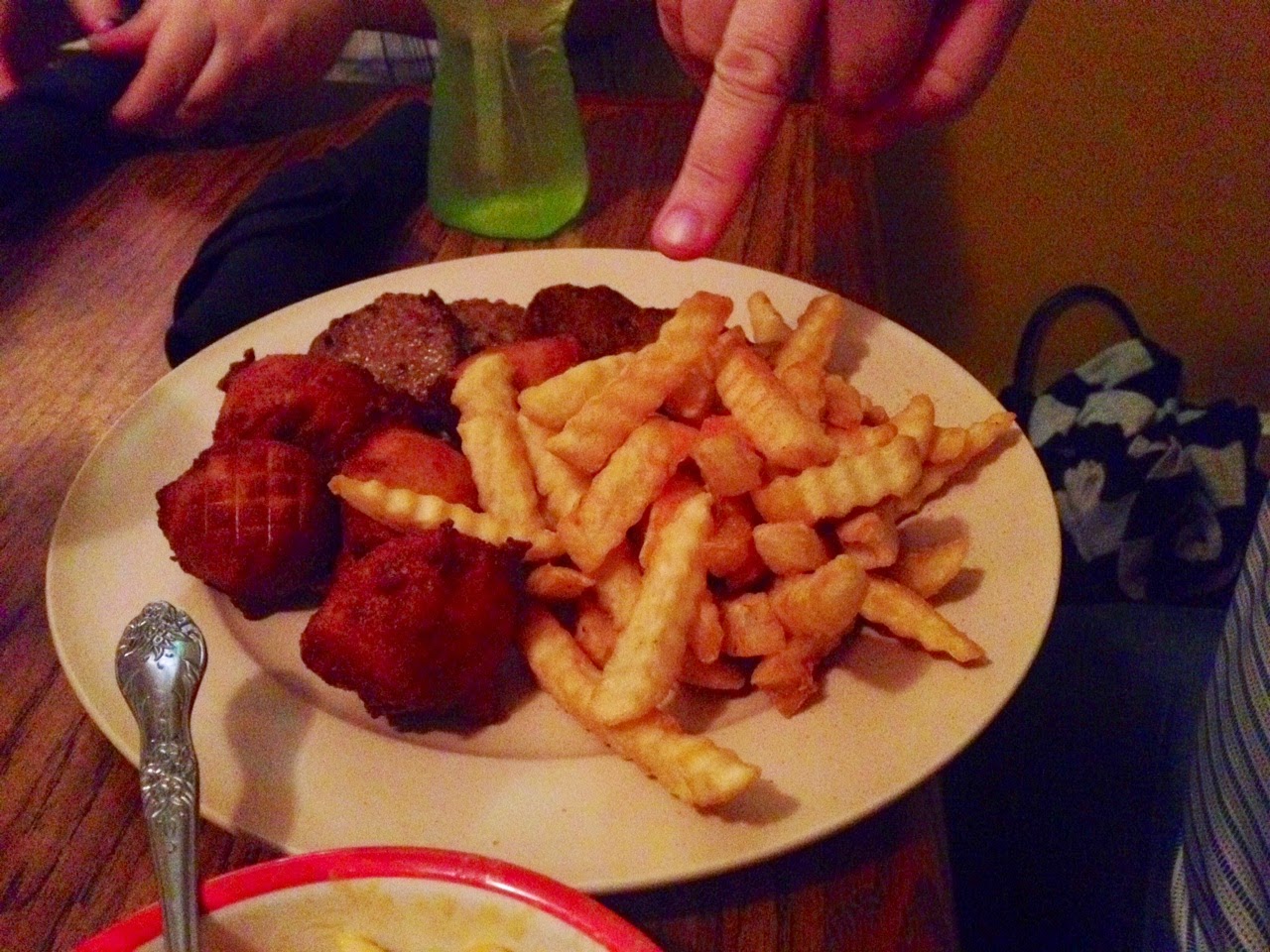