Veggin' Out: Round Two — My Dinner Party!

Last week, I blogged about our first dinner party in a series of four being filmed for YouTube webisodes based on the British show, Come Dine With Me. On the original show, four strangers each take turns hosting a three-course dinner party at their house for the four of them. After each dinner, the three guests who didn't host score the party on a scale of one to 10. The host with the highest score wins.

Well, we're using that concept, but the parties are being hosted by some in our circle of vegan friends — me, Pam, Stephanie, and Megan. Last week, Megan hosted the first party, and her husband Joey and his film-making friends documented the whole thing, complete with catty reality show-style "confessional booth" time.

On Friday night, it was my turn! I'm keeping the details light since we'll be saving the good stuff for our webisodes (I'll be sure and link when they're up!). But here's a sneak peek of the food. Oh, and here's where we ate. 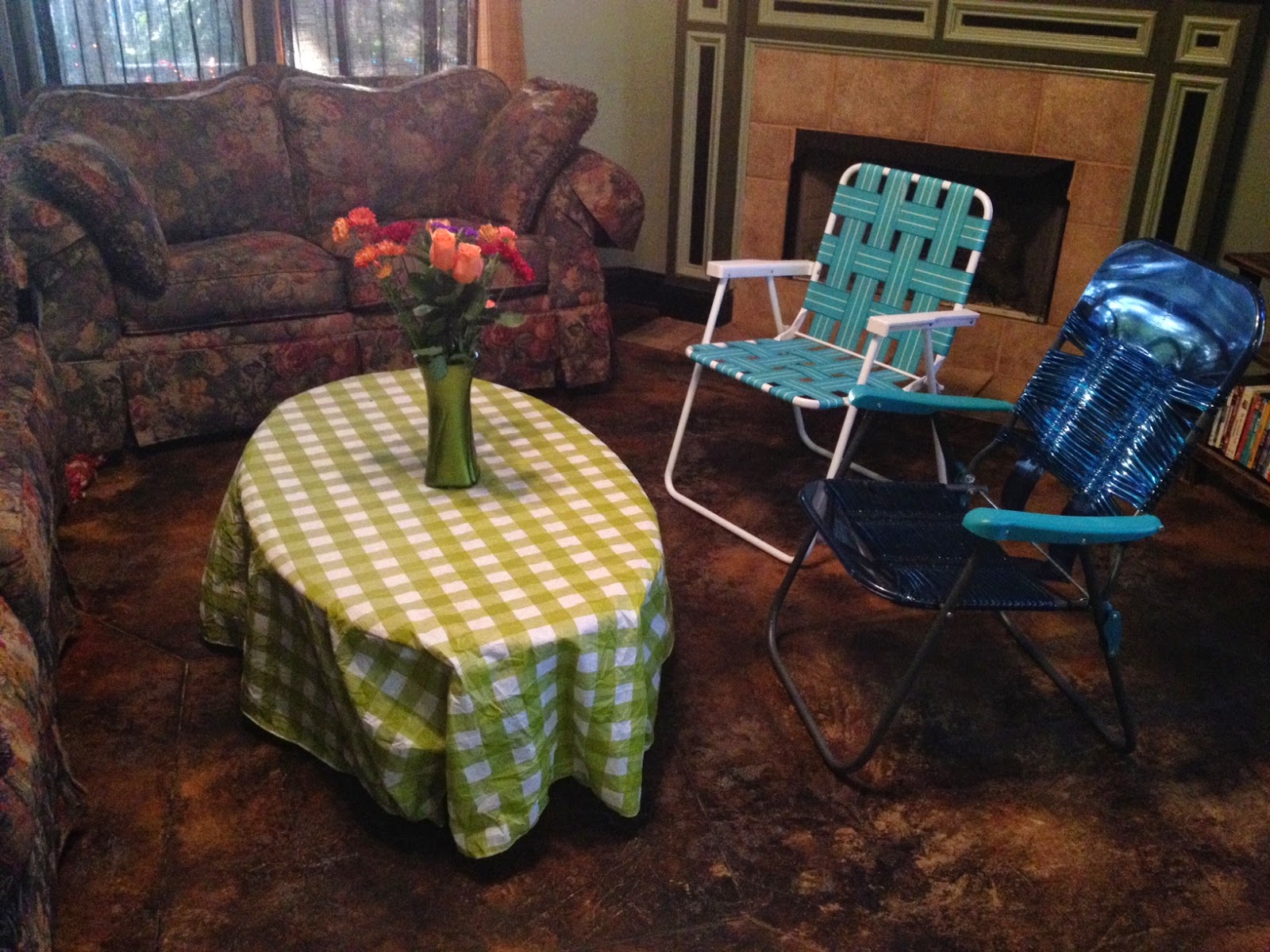 You see, I replaced my old, creaky four-person dinner table for a two-seater bistro table a year ago. So I had nowhere to feed four people. It's a good thing I was going with a "trashy meets bourgeois" theme. I threw some fresh flowers and a tablecloth over my coffee table, and my guests sat on the couch and in lawn chairs. Yep, I'm all class, bitches.

I hadn't planned on an amuse-bouche. But guess what arrived in the mail Friday morning, just hours before my dinner party? A sample box of Miyoko's Creamery nut cheeses! I selected two that paired best with my Southern-style menu. I'll be doing a full review of these cheeses in a few weeks (after I sample all eight cheeses), but here's a glimpse of the Fresh Loire Valley in a Fig Leaf and the Aged Smoked Farmhouse. Both of these were AMAZING! I can't wait to tell y'all all about them. 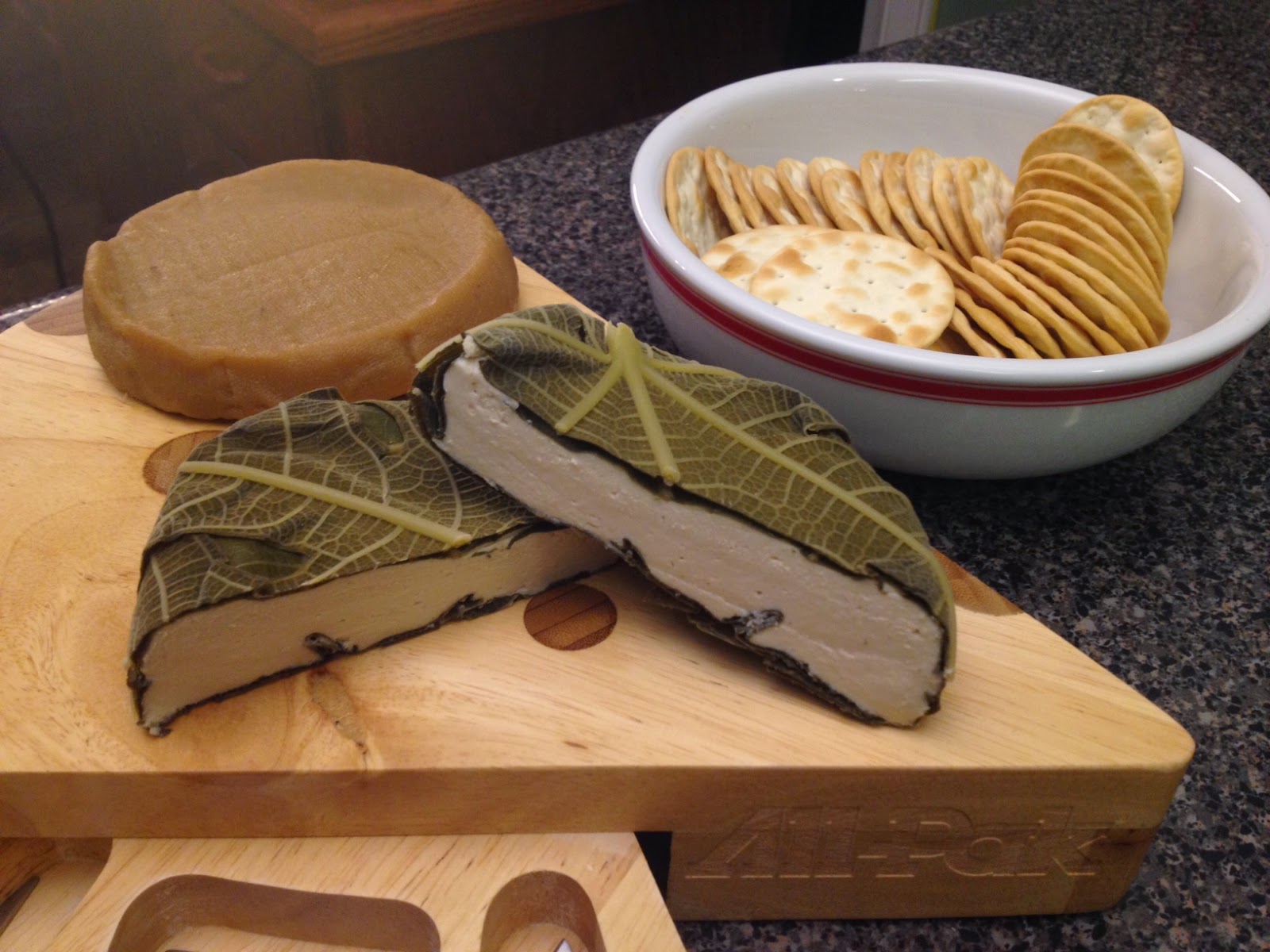 For my first course, I went with the Tofu Deviled Eggy Bites from Cookin' Crunk. 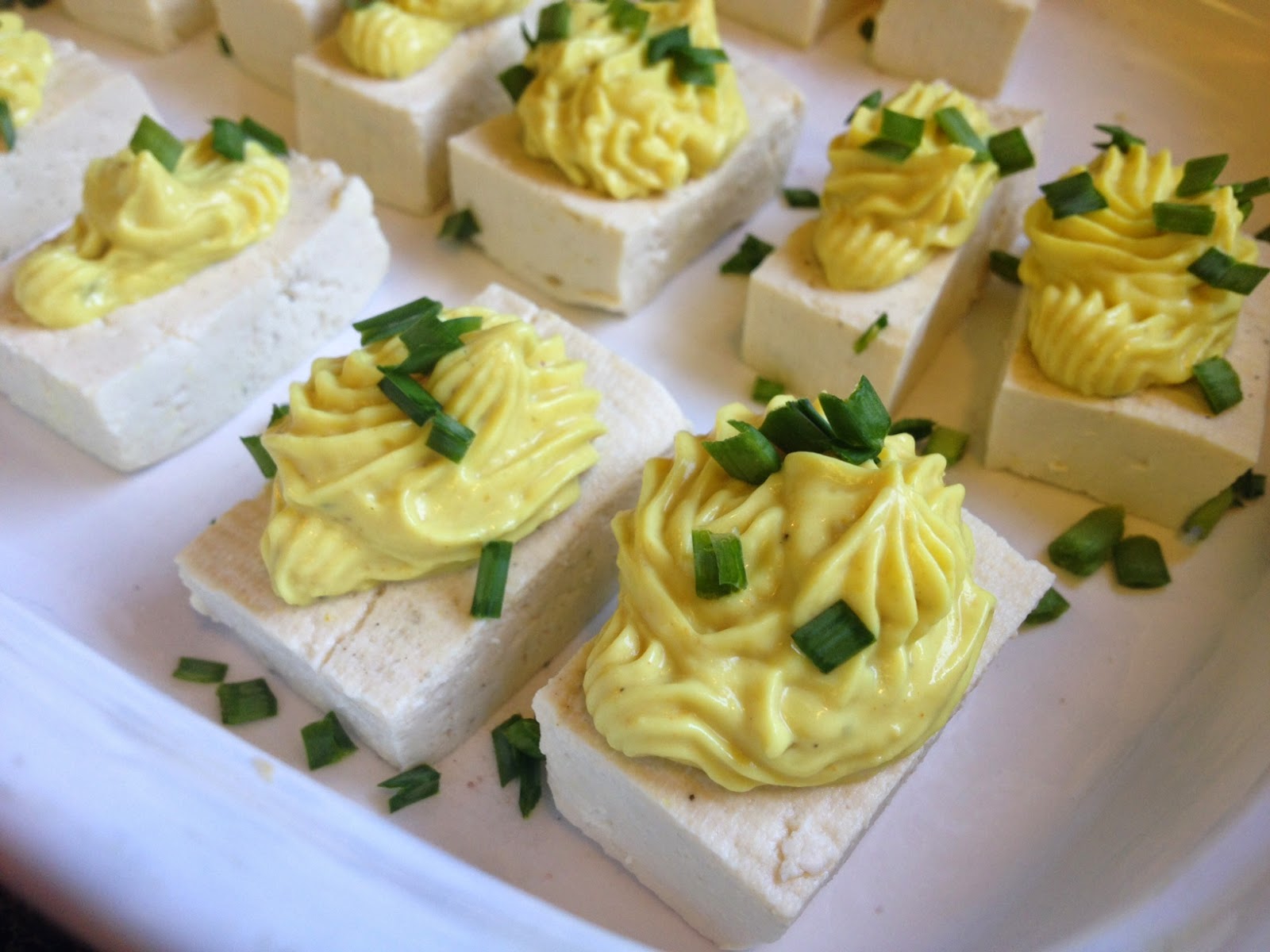 And the Seitan & Red Pear Salad from Cookin' Crunk. I tried to stick with recipes I've made a million times since you don't want to experiment on guests at a dinner party where you're being scored! 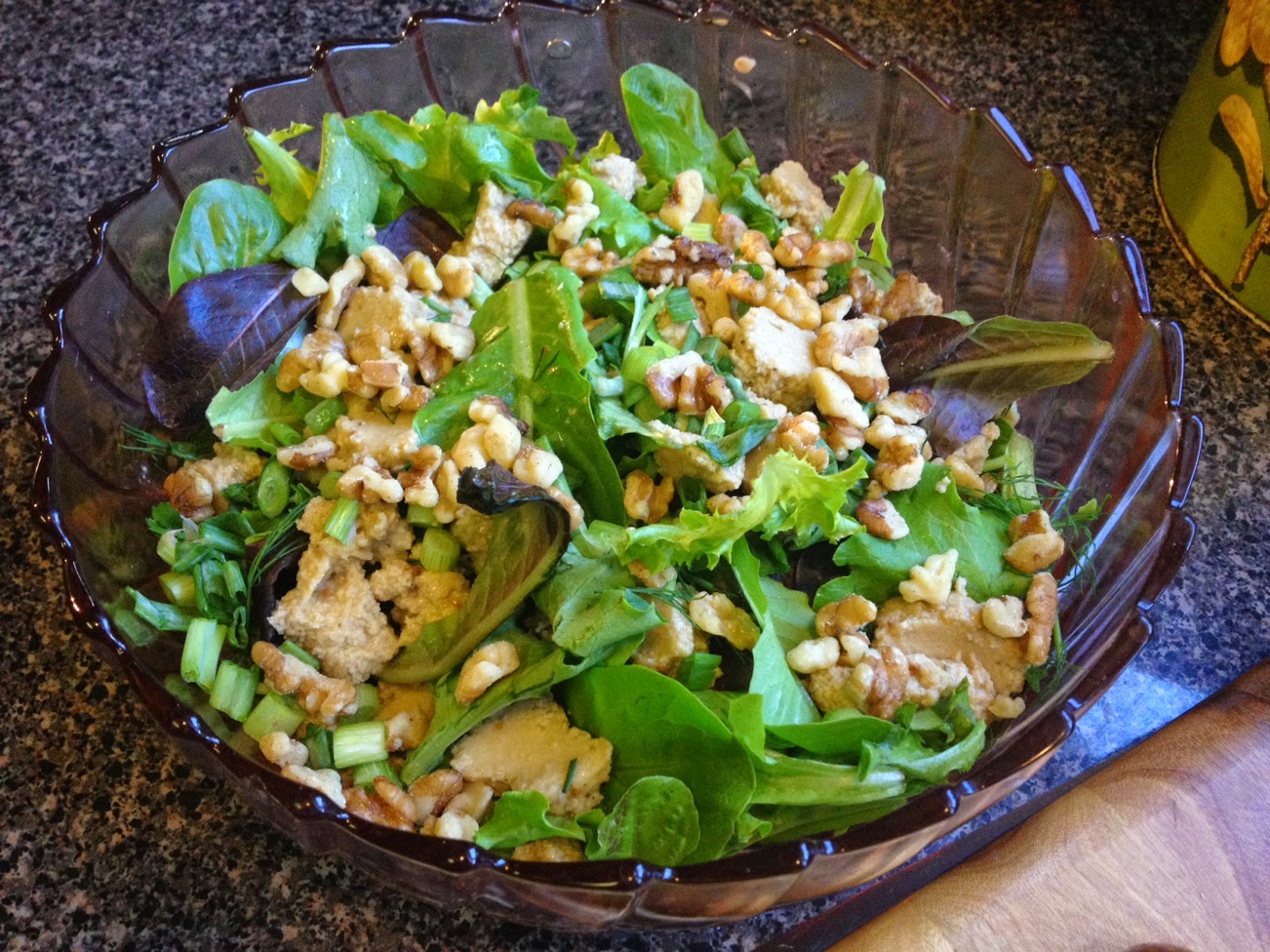 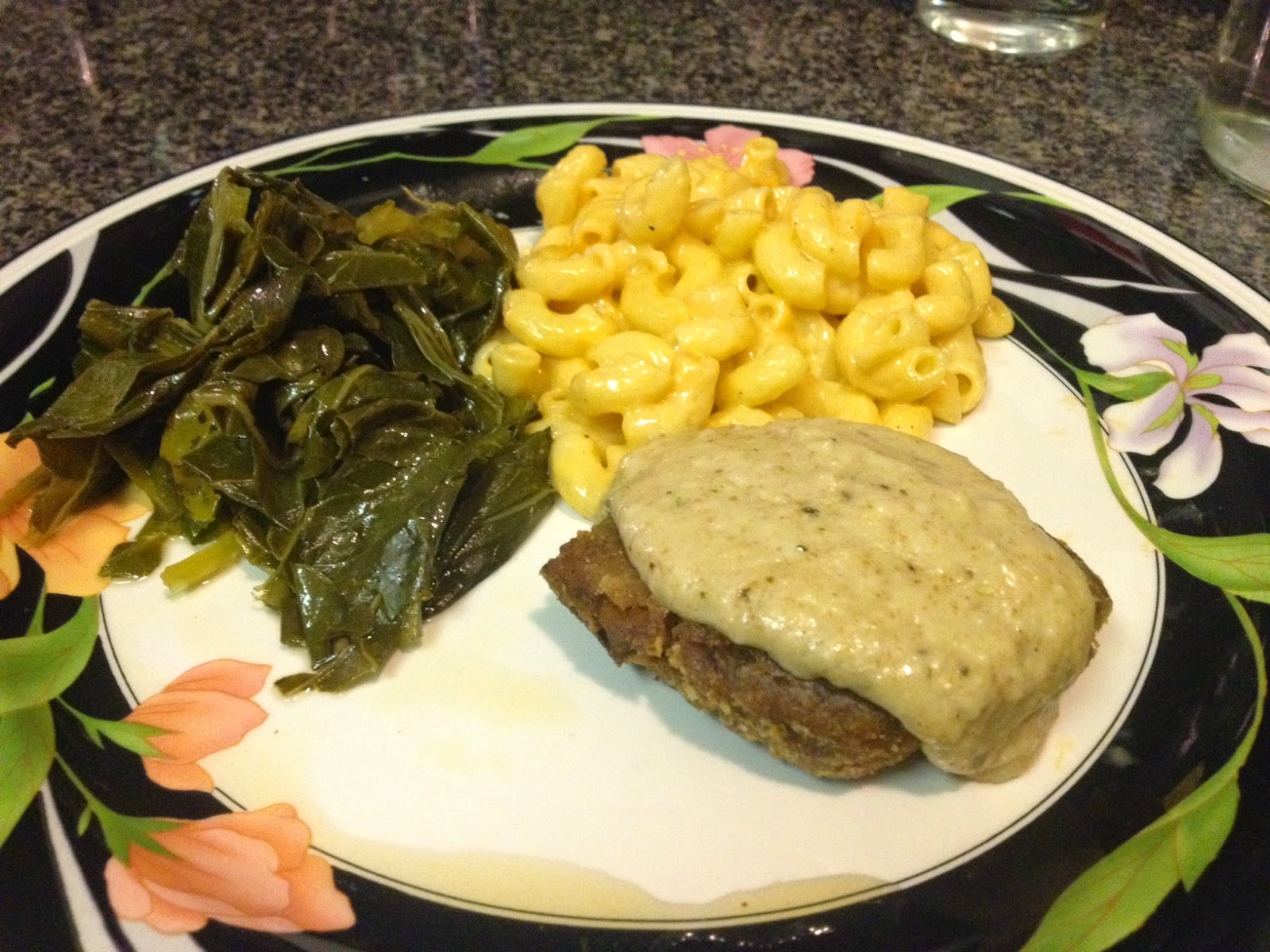 The tempeh and greens were from Cookin' Crunk, but I just winged the mac recipe. Basically, it's just a package of Daiya cheddar, some almond milk, Earth Balance, seasoned salt, garlic powder, and a dash of white truffle oil. I really loved the mac, and I will make it again!

I'm saving my dessert pictures for tomorrow night's post because one of the main ingredients is an exciting new product that I've been asked to review (hint: VEGAN COOL WHIP!! OMG!). So be sure and check back tomorrow for a full dessert report.
Posted by Bianca at 10:45 PM

Haha I LOVE the lawn chairs in the living room!! It reminds me of having a dinner party without enough cutlery and serving people with ladles.
The cheese in the fig leaf is wayyyy classy though! Damn girl. The rest of the food looks awesome too. Seitan and pear salad, huh?

I love this idea SO MUCH. And I love that you're going all out with the confessional booth and everything. I've never seen this particular show, but it makes me want to check it out. I can't wait to see the webisodes. I know it's going to be hilarious.

I had to do a similar impromptu seating arrangement once when I was hosting a dinner party for 6 and only had a table for 4. I got a piece of plywood at the hardware store, put it on a block on the ground, covered it with a sari, and we all sat on cushions on the ground. I think unconventional seating arrangements can add to the fun.

Your dinner looks fabulous, and of course, I'm beyond jealous of the Miyoko bounty.

Your food looks great. I am very jealous of the Miyoko cheese!

That mac looks so great and I'm kinda jealous of the Miyoko Creamery cheese. I need to find it when I'm in the US next year!

You guys are so much fun! I can't wait for the webisodes. I'm super jealous you got to try that cheese, pretty sweet that it showed up just in time. Everything you made looks super tasty.

Where the webisodes ever posted? I'm rooting for you!

Aw thanks Anonymous! But unfortunately, our footage didn't turn out so well. It was missing audio in big chunks, so we decided to scrap the project. :-( We had fun though! And we did go ahead and tally the votes, and Stephanie won. Figures! Ha!