Every Sunday, I meet a couple of my vegan girlfriends for brunch. We typically meet at Imagine Vegan Cafe because they have a fabulous and sinful brunch and very stout (free! with the purchase of a mixer) cocktails. We call ourselves Bitches Who Brunch.

Well, last week, the brunch bitches decided to venture out and try something new. We felt guilty skipping out on Imagine, and we'll do the walk of shame back into Imagine this coming weekend. But I'd recently learned that Fuel Cafe had added a ton of vegan options to their brunch menu, and we just had to try them. And it just so happened that the new Memphis Meetup.com Vegan Dine-outs and Potlucks group was meeting at Fuel for brunch that day too. We joined their table on the breezy outdoor patio.

Fuel doesn't serve hard liquor, so they got creative and made beer-based brunch cocktails. We all ordered a round of Fuel Mimosas (hard apple cider mixed with mango juice). 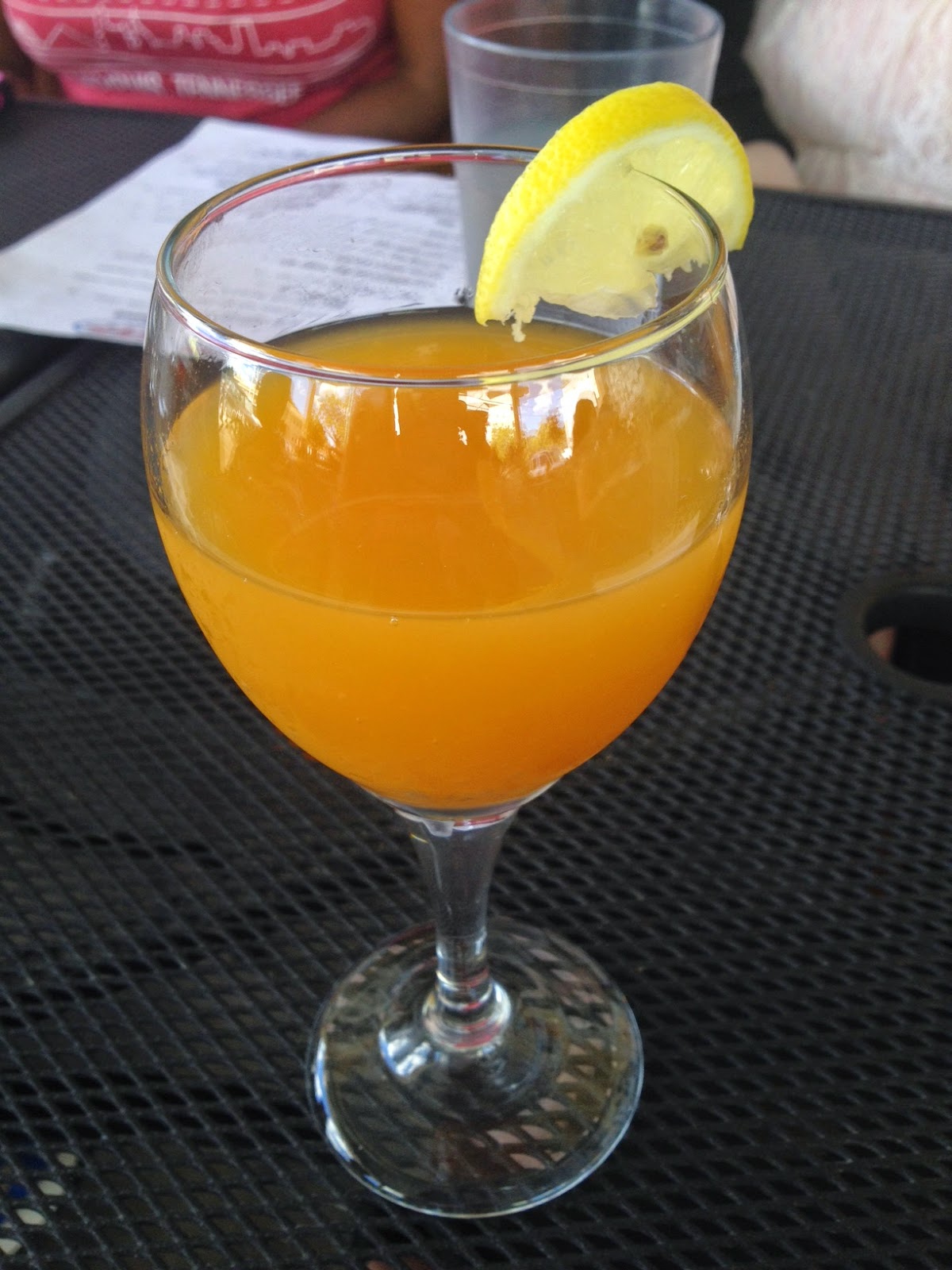 After much deliberation, I ordered the Tofu Migas with blue corn tortilla chips, tofu scramble, vegan cheese, salsa, and avocado. Good choice! Loved this dish, and the cheese got all melty as I dug in. 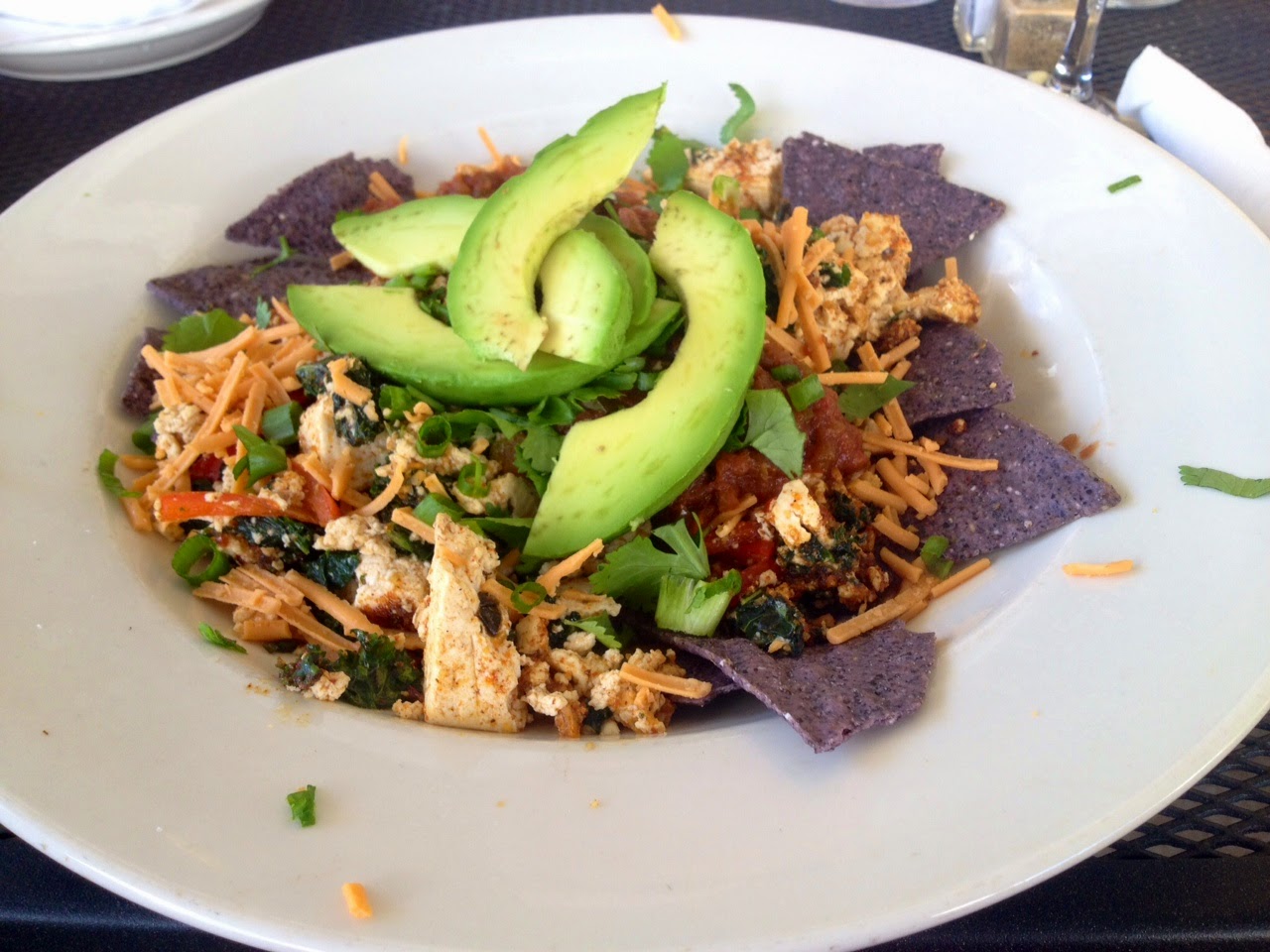 Fuel has a very veg-heavy Tofu Scramble, which can also be ordered a la carte. That's what Stephanie did. 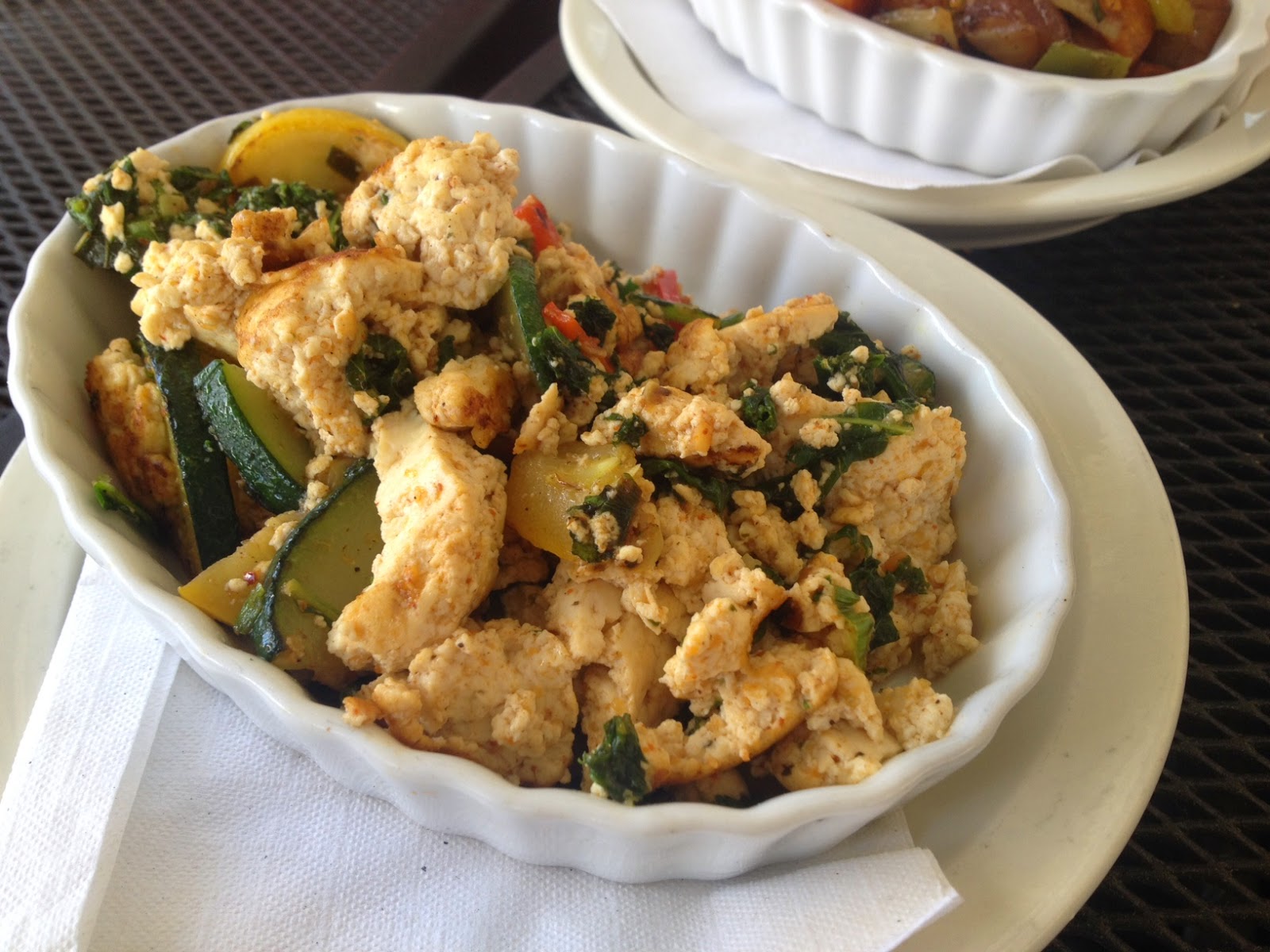 And she got the Sweet and White Potato Hash a la carte as well. 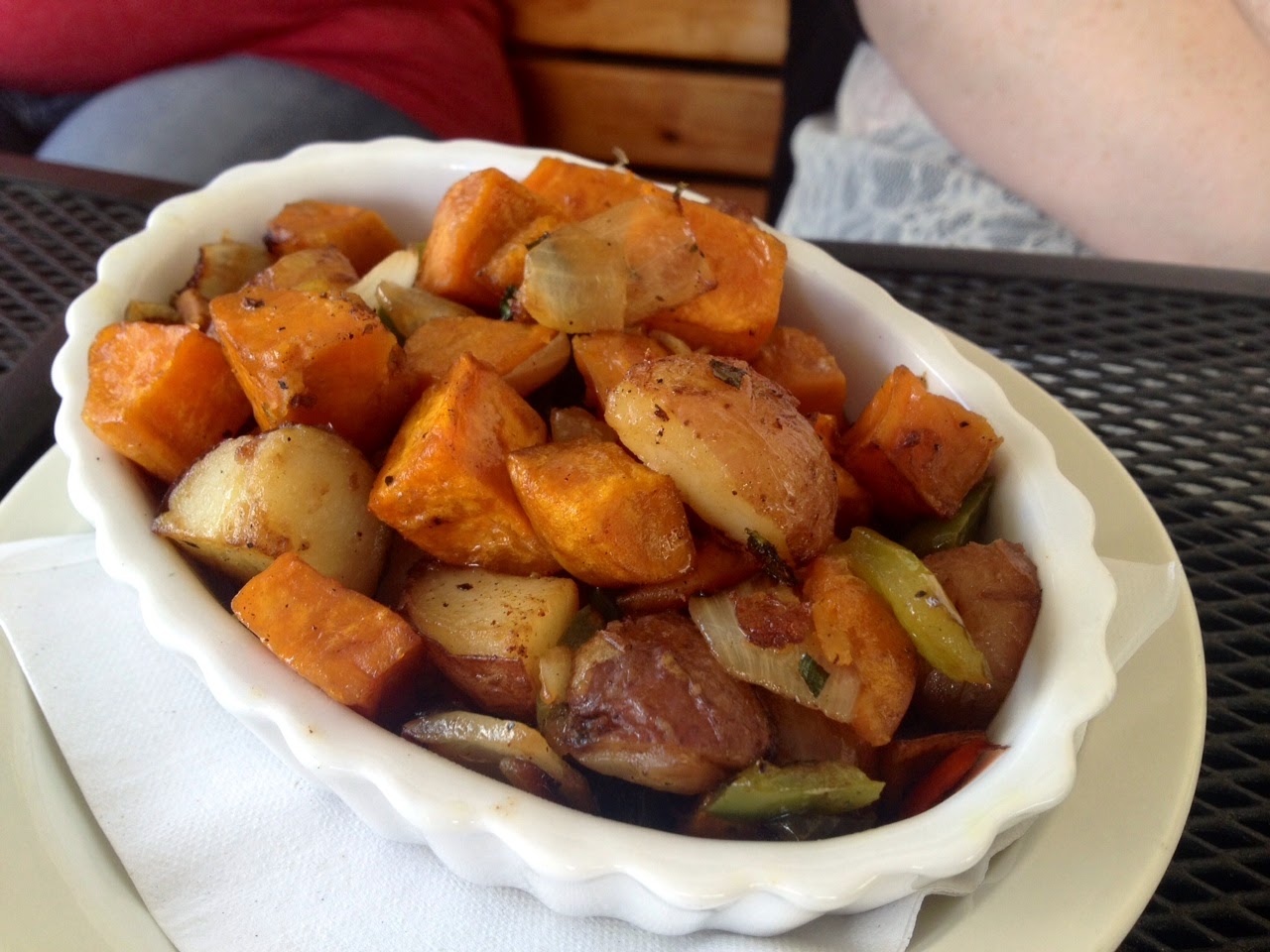 Someone from the Meetup group ordered the adorable star-shaped Vegan Biscuits with Earth Balance. 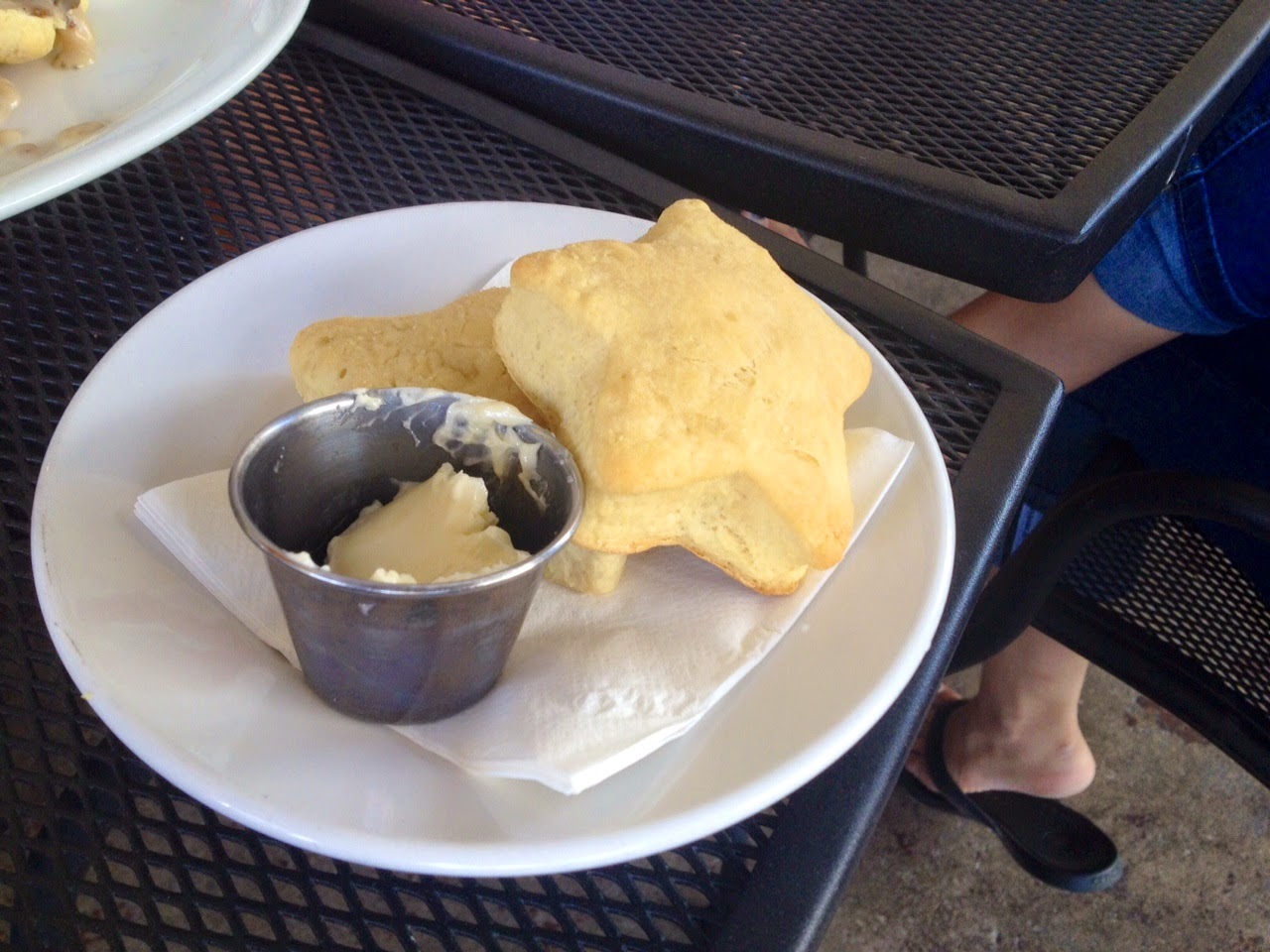 And another person in the group got those same biscuits but covered with Vegan Sausage Gravy! I almost ordered this instead of the migas. Next time! On the side, he ordered the Watermelon Mint Salad, which Cassi swore to be the best. I didn't try it, but I'm sure it was delicious. 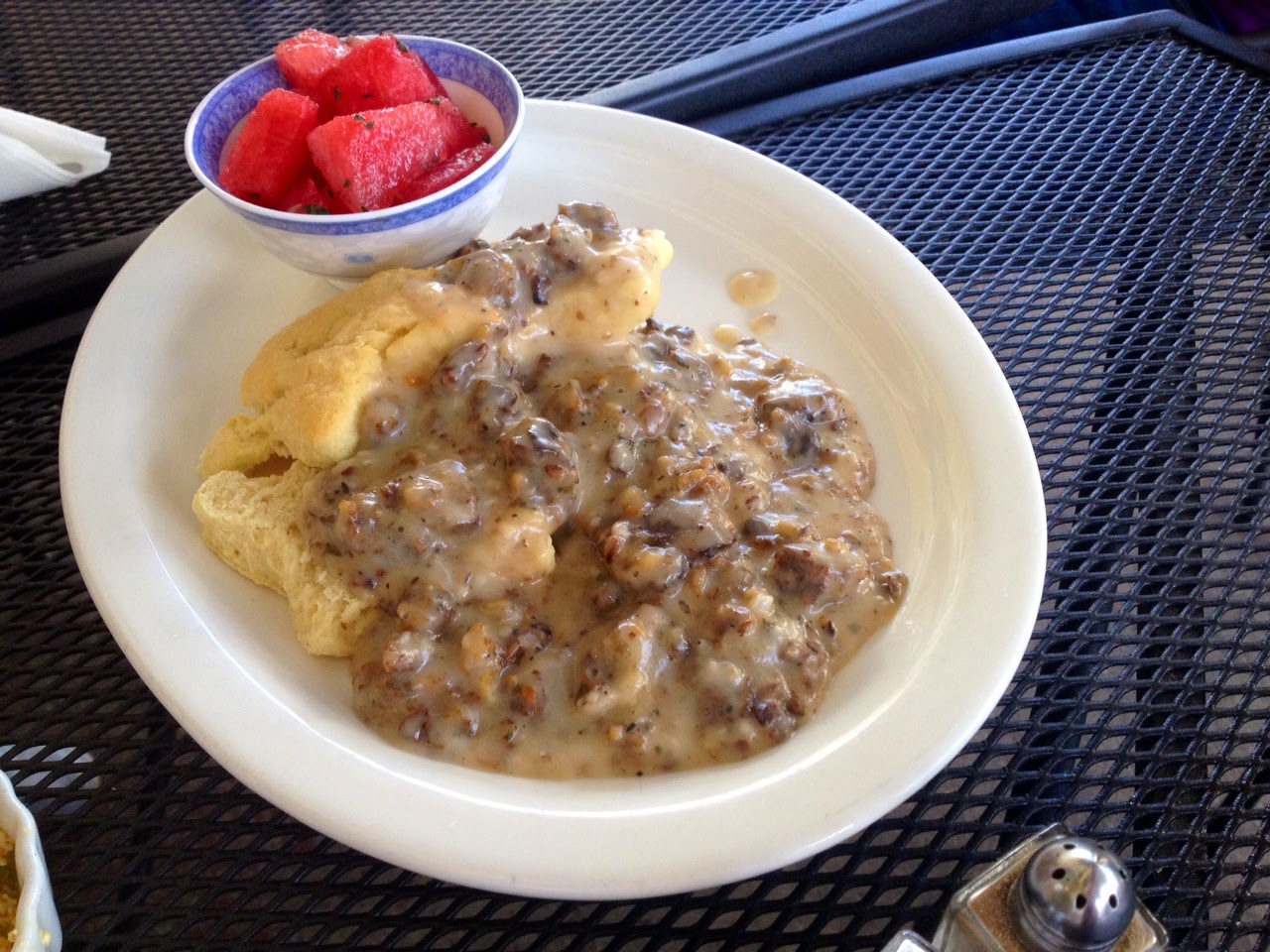 Since brunch is a combination of breakfast and lunch, Fuel also has some more lunchy fare on the brunch menu too. Our friend Nic got Fuel's famous Vegan Quinoa Chili Cheese Fries. I LOVE THESE! This is, hands down, my fave Fuel dish ever and what I typically order there since it's also on the lunch menu. Their quinoa chili is to die for, especially when served atop fries smothered in Daiya. And Cassi's kid, Keithon, got the homemade Fuel Veggie Burger. It's a vegan patty made from scratch, and it is by far the best vegan burger in Memphis. 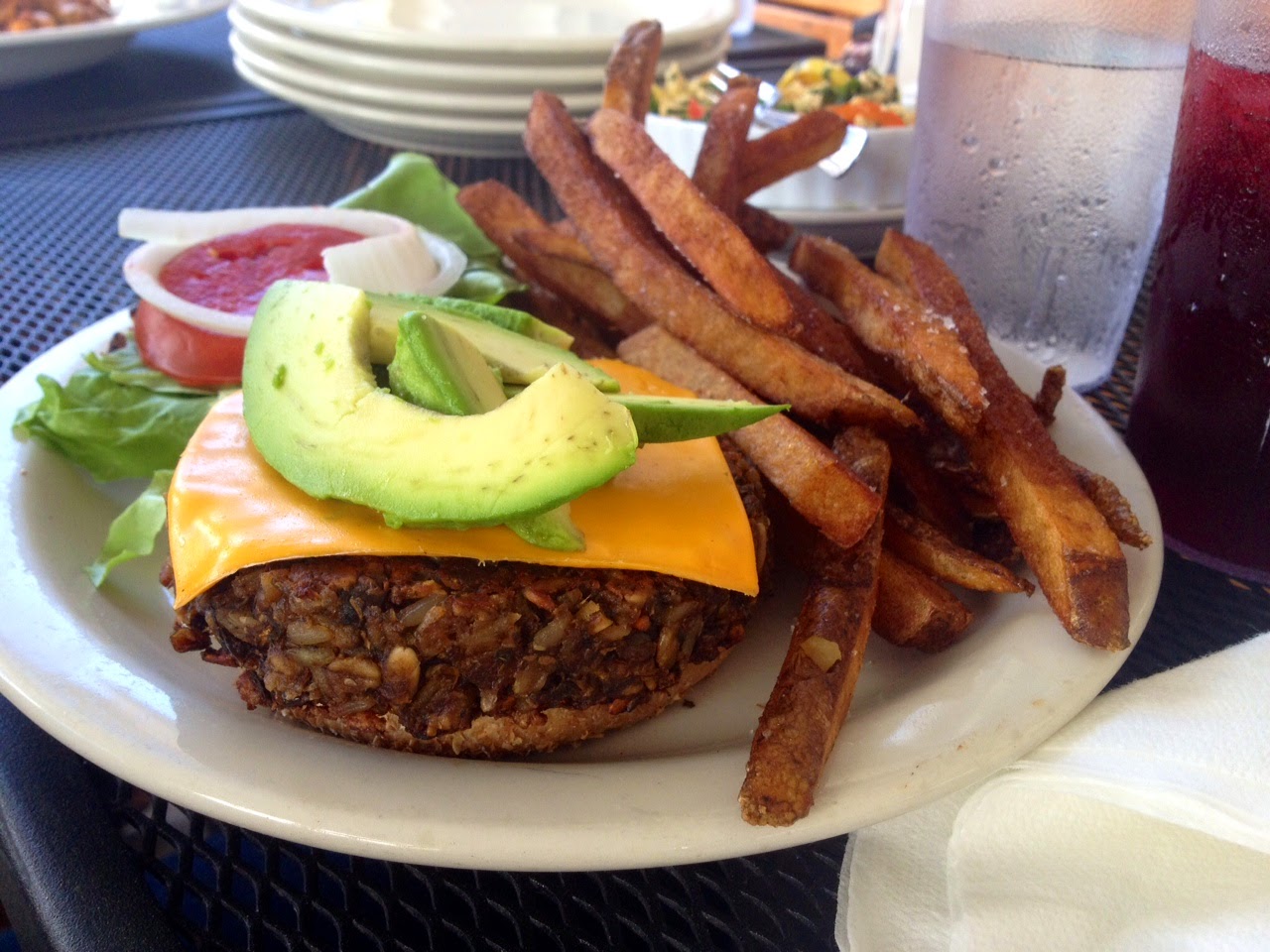 We'll definitely have to go back to Fuel brunch soon, after we make it up to Imagine next week! Maybe we can start alternating!
Posted by Bianca at 10:01 PM

Would you guys be seriously freaked if I showed up from Canada one weekend? Stephanie seems to like me, if that helps.

The Quinoa Chili Cheese Fries win hands down! Wish I could swing down ad pick up a giant order...do they deliver to WI? ;)

Tungstens Mum! I would not be freaked out, but you'd better let me know ahead of time so I could bake you ALL THE THINGS and clear my schedule for maximum hang-outs <3

Oh my gosh, yessss!! All of this looks awesome! We definitely need a Fuel Brunch in our future!

Omg, it all looks so good! I'm like, 2000 miles away from Memphis, but I'm totally going to try to recreate the quinoa chili cheese fries tomorrow. Any tips?

It all looks great, but I need those chili cheese fries the most!

This is totally the kind of brunch dreams are made of.

You make Memphis look so palatable for vegans.