Folks in Memphis get in drunken fist fights over the virtues of wet ribs versus dry ribs. Seriously. Memphians are crazy about barbecue, and while this behavior totally creeps me out, I hate to miss out on a good debate. I knew I had to create a Dry Rub-Style Seitan BBQ Rib recipe for my cookbook: 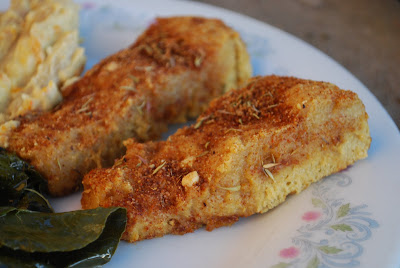 For those unfamiliar with barbecue culture, "wet ribs" indicate the use of barbecue sauce. "Dry ribs" contain no sauce, and are instead are rubbed with a salty-sweet barbecue spice mixture. Though I've seen a number of tasty wet BBQ seitan rib recipes out there, I couldn't find a dry one. So I made one up.

My rub recipe — a mix of seasoning salt, brown sugar, smoked paprika, and some other stuff — was actually inspired by my friend Amber's family rub recipe. She uses it on tofu and Morningstar Farms "chicken" strips. I added a few more ingredients and rubbed it into some homemade baked seitan strips, made using my all-purpose recipe for seitan.

I served the ribs with a helpin' of my Mac & Cashew Cheeze: 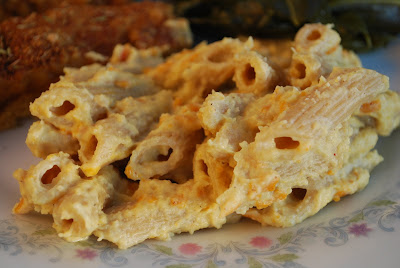 This recipe's also going in the cookbook, and I've shown pics on the blog several times before. I'm still tweaking the recipe to acheive a creamier texture. I've learned that cashew cheeze dries out quickly, and even though it tastes smooth and creamy in my mouth, I want it to look creamier on the plate. Hopefully, I'll be able to perfect that soon.

I also had some of my Collard Greens: 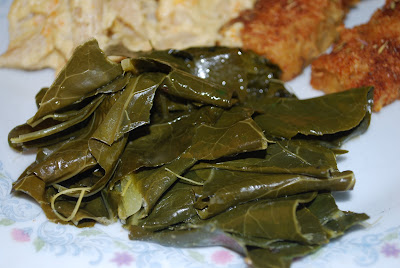 I typically cook my collards with turnips, but I was in a hurry to eat tonight and didn't feel like running to the store for more ingredients. The greens were still delicious and smoky and comforting without the chopped turnips, though.
Posted by Bianca at 11:37 PM

I definitely prefer dry rubs to wet sauces, and I coat my seitan in a spicy hot mixture occasionally. Yours looks delicious, can't wait for that cookbook!

Your Mac & Cashew cheese looks so yummy! The dry rub is a good idea!

SERIOUSLY, Bianca, can I come to your house for dinner some time??? I'm so not kidding!

(In fact, I'm thinking about making a special trip up for it hehe)

Looks great! I have a batch of seitan left over from making vegan stroganoff the other day, so I might try this! For the greens; I love to eat em up with Pickapeppa sauce on them.

I used to like dry ribs that the chinese place did in my omni days too. They look awesome, as does the mac n cheeze.

Will you have your all-purpose seitan recipe in your cookbook, or will I find it here on your blog? I can't wait until your book comes out. Your food always looks amazing!

I really need you to make me dinner! Everything you make always sounds riduculously delicious!

Seems like a great idea. Dry run is awesome. Great food for us here in the dirty south.

I've actually never had ribs. Ever. They creeped me out so much, I've never liked eating things off the bone. But I would love some vegan ribs, the flavor sounds awesome!

And I think your mac and cheese looks pretty creamy now!

Yum! I can't wait to try these recipes!

I can't wait to try your Mac & Cashew Cheese recipe when the book comes out. I bet it's delicious!

I read your comment on my recent post and I couldn't agree with you more. I think food blogging definitely attracts those of us with food/eating issues. Since I started reading food blogs 2 years ago I have definitely developed a more appreciative and healthy relationship with food. Food blogs definitely create a huge support network, which is great because some people might not have that kind of support elsewhere.

Why haven't I thought of doing a dry rub. I love dry rubs.
Great looking meal.

thanks for explaining this bit of memphis history to me. i never understood the appeal of dry rubs, although i imagine it is pretty good. i like my bbq messay.

Incredible! Wish I could quit my job to stay home and cook all day...thanks for the ribs! Good thing lunch hour is only 17 mins from now!

Using cashew butter instead of cashews (or grinding down the cashews into paste) makes a much smoother sauce.

I haven't even heard of dry ribs. I feel like wet ribs are better because who doesn't like embarrassingly messy food But I'm sure if you've made a recipe for them, then they're awesome!

that's one plate of deliciousness i wish i was eating right now! i can't wait to try out your dry rub, Bianca! mmmmmmmmmmmmmmmm! i've always prefered them to the wet sauces, fo 'sho! man, your food always looks so damn delicious! yay!

weird!! I was just thinking about a dry rub for bbq seitan the other day! brain twins! i am more of a wet bbq fan myself, but these look awesome, of course! can't wait to test those bad boys out!! i will be making that tempeh gumbo later this week.

That looks like a mighty fine meal to me, dry rub & all!

Um, ok. I say this is what you should make next time I visit! Looks Amazing! YUM!

Wow that looks great. I will have to try it.

Interesting! I've used a dry rub on tofu and it was good, but wouldn't have thought to try it on seitan.