Lots of Salad, No Lettuce

Today was my monthly raw food cleanse, and I ate a ton of salads without crunching down on a single piece of lettuce! Nothing against lettuce, but sometimes it gets boring. I get stuck in salad ruts with the same old veggies on the same old romaine.

My morning didn't start with a salad though. I woke up to this delicious glass of Made In Mexico Mylk from Ani's Raw Food Kitchen: 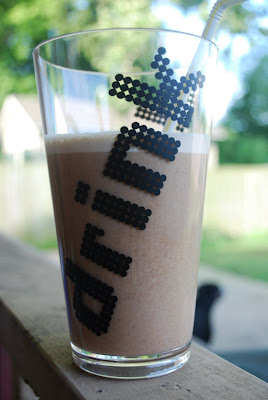 This was amazingly tasty — almonds, dates, carob, cinnamon, and vanilla bean — and surprisingly creamy. I'll certainly be making this again!

Of course, I knew a little ol' glass of nut milk wouldn't satisfy me for long. So I brought this Tomato & Watermelon Salad to work as a pre-lunch snack: 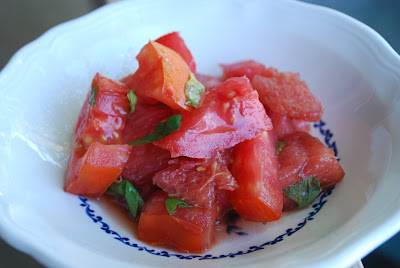 The recipe comes from Mark Bittman's "101 Simple Salads for the Season," a New York Times article with plenty of vegan salad ideas. This one contains fresh watermelon, tomato, basil, and a basalmic vinger/olive oil dressing. 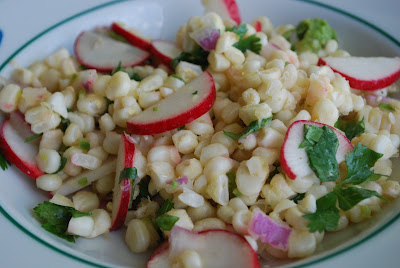 The recipe is here. I found it on a quick internet search for raw corn recipes. I had some delicious local Silver Queen corn that needed usin', and it was perfect paired with crunchy radishes and tangy lime.

I also slurped some Harvest Soup: 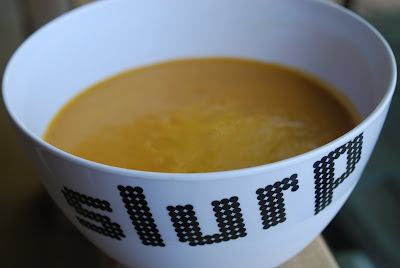 This creamy raw soup recipe came from Kristin Suzanne, but I found it on Gena's post about blended salads on her blog, Choosing Raw. Ever since Gena waxed poetic on the wonder of blended salads (basically just veggies whirled in a blender until creamy), I'd been wanting to try some. This one contained zucchini, tomato, carrot, celery, and flax oil.

I was starving by 3:30 p.m., so I snacked on a fresh plum and these local veggies — heirloom cherry tomatoes, green bell pepper strips, and cucumber slices: 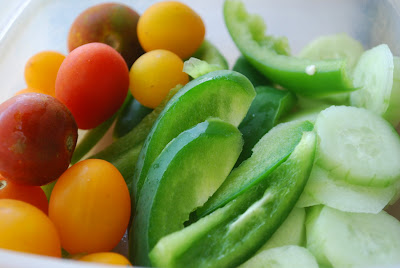 After work, I scarfed down this Raw Revolution Cashew & Agave Nectar bar before hitting the gym: 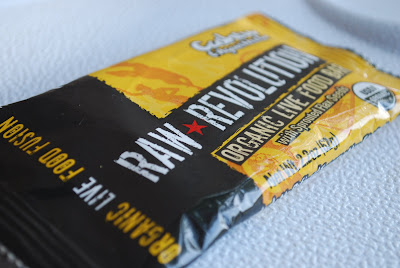 These huge bars contain 280 calories and 16 grams of fat, so I certainly wouldn't eat the entire thing on a regular day. But on raw day, I figure I need the fat and calories. This is one of my all-time fave bars!

After my workout (45 minutes on the treadill while reading Twlight), I rushed home to cool off with this Fresh Watermelon Popsicle: 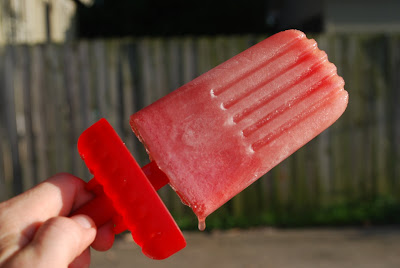 My mom recently bought me popsicle molds, and I filled them with fresh watermelon juice from a local melon I picked up at the farmer's market last Saturday.

For dinner, I had Pesto Stuffed Mushrooms: 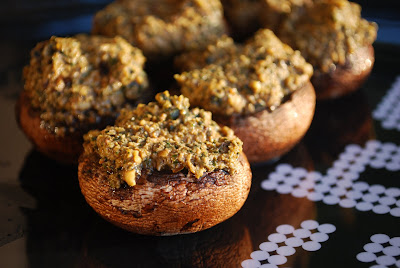 I was inspired by Voracious Vegan's Summer Stuffed Mushroom post a few weeks ago. But hers were cooked, so I googled "raw stuffed mushrooms" and found this recipe. It calls for dehydration, but I don't own a dehydrator (sometimes I borrow my parent's though). Instead, I placed the stuffed baby bella caps in the oven on its lowest setting for an hour. They didn't cook, but they did get dehydrated-ish. I'm sure they're not techinically raw now, but whatever.

Alongside the mushrooms, I ate this Carrot Avocado Bisque from Choosing Raw: 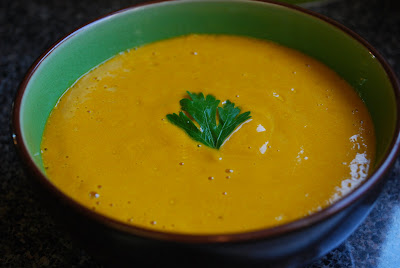 Yes, I know it looks quite similar to the Harvest Soup (and both recipes came from Gena's blog), but the taste was totally different. This soup is made from carrot juice, avocado, ginger, and flax oil. The avocado gave it a crazy creamy texture that was almost like pudding!

Finally, for dessert, I had the best raw treat ever — Raw Banana Soft Serve with Carob Syrup: 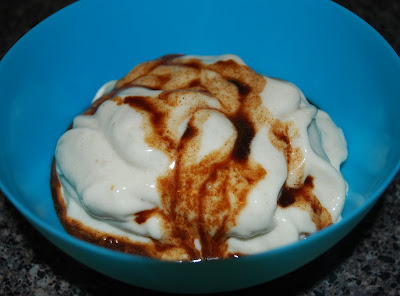 Also from Gena at Choosing Raw, this dessert blew my mind! It's simply frozen bananas whirled in the food processor until creamy. That's it. And it may be the creamiest thing I've ever eaten, far smoother than any ice cream I've had. I think I may start making this every raw day and even some non-raw days in between.

The syrup is simply a pinch of carob powder mixed with a little agave and water. It's tasty, but not totally necessary. The banana cream is pretty sweet on its own.

By the way, my kitty Polaris had fun trying to chase the banana chunks as they spun around in the food processor! 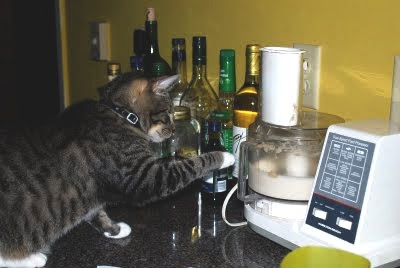 Okay, this post has way too much yummy goodness - I don't even know where to start!

My mind keeps going back to that fresh watermelon juice popsicle. Talk about the perfect summer snack!

Isn't that banana ice-cream THE BEST!?!? I thought it would be ho hum okay for only being a banana, but woooweee I was shocked! Pure deliciousness!

Your mushrooms look great, by the way!

I'm gonna buy some bananas today just so I can make that ice cream.

All your foodz look awesome, especially that corn salad. I love sweetcorn.

Hello, loving your blog, thank you so much for sharing

Bianca: as host of said Lammas celebration, I can definitely confirm that your bread and hummus AND coconut pie were delish! I especially liked the bread. And while I'm on the subject of your culinary prowess, may I add that the cupcakes you brought to Amber's birthday party were to die for! Thanks for your continued contributions! Love you!

Oh man, I need to have all of your eats in my belly now! So good!!!

The stuffed mushrooms and corn salad are my favs! Yummy!

The picture of your cat trying to get the bananas is adorable! I love making banana "ice cream" like this. It's so simple but hits the spot when I want something dessert-y.

I have the same slurp bowls from target! They are so fun :)

Gosh I envy your raw days (ok, and your cooked food days too), the food always looks sooo good!

That looks like a great raw day. I'm gonna try the banana ice cream thing. Love the dishes too!

Holy raw food! I'm starving now. Raw food day is a great idea. I just started figuring out how to sprout things and am really wanting to make a raw cashew cheese.

Now you make me feel bad that I went out to buy an ice cream maker.. Hmmph. That looks creamy and so decadent. I saw some popsicle moulds somewhere and since it is hot everyday here I should have some popsicles in the freezer. This raw post has me very interested in trying raw now.

What a great cleanse day! I understand what you mean about lettuce. Sometimes I want my salads to be a little bit more substantial too.

I tried those Raw Revolution bars for the first time a few days ago. They are SO good, I was surprised, really. I had the chocolate hazelnut, yummy.

isn't banana soft serve the greatest thing ever?! i'm so in love with it! but everything in this post looks incredible. that made in mexico mylk? YUM. and the mushrooms..........too tasty looking for words.

I always look forward to these posts! Great ideas all around! Especially that corn salad, yum.

I love that bowl and cup! That is awesome!

MMM the carrot avocado bisque looks the best! And I've been wanting to try that banana soft serve that everyone's been raving about! You're so good at raw days, dude :)

What book of twilight are you in? OMG, I totally fell in love with the series and swore I wouldn't. lol.

aw, Polaris = the cutest! i need to check out that times article on the salads - the watermelon salad looks super stellar! i also need to hop over to Gena's blog - the banana soft-serve and the soups sound amazing! carob syrup = glorious sounding! mmmmmmmmmmm! i love those stuffed mushies, and raw veggies = the best snack! aren't those raw revolution bars the scrummiest!?! i love 'em, too! such an awesome raw day, Bianca! i love it all!

I love the idea of a raw day. I should try this!

As always, the raw food post is amazing! Love the pic of Polaris chasing the bananas - cats are so cool. The soft serve frozen bananas is another recipe I need to try - looks delicious.

You've made me want a cat. That is the cutest thing I've seen in a long time. My dogs bark at the food processor--not as cute.

All this raw food looks delicious. I'm intrigued by the breakfast nut milk--that could be a nice alternative to my fruit smoothies. I wonder sometimes how many nuts Ani goes through in a week.

I'll give the banana ice cream a try. Much easier (and healthier) than making real ice cream!

i have tried that banana soft serve but it just didn't do it for me...too bananaey...and i LIKE bananas..so i dunno. i think i might try it again one day. that raw corn salad looks delicious, i hate cooking in the dead of summer like this, its so hot!

I just made the banana ice cream . . . and wow!!!! That is the most ridiculously easy, amazing desert ever! With or without the chocolate topping, it is so good. The texture and taste are perfect.

I LOVE your blog. I've officially sent it to every southern and non-southern vegan I know. Love the lettuce-less salads :-)

I love the pesto stuffed mushrooms! :)

B! Sweetie, forgive me for having taken a while to read all about your total deliciousness. I am drooling over your raw day of eats, and so honored to have helped inspire them a bit! xoxo

Holy crap, all of those eats look amazing. The Raw Revolution bars are soo good. Chocolate coconut and chocolate raspberry are my favorite. I've never tried the cashew and agave, but I'll keep an eye out for it.

Wow, another great raw day! I'd comment on the food, but it all looks too good to pick anything out!

Mmm, corn salad! I love your glass & bowl. It looks like your cat wants to mix a drink!

Generic Viagra (sildenafil citrate; brand names include: Aphrodil / Edegra / Erasmo / Penegra / Revatio / Supra / Zwagra) is an effective treatment for erectile dysfunction regardless of the cause or duration of the problem or the age of the patient.
Sildenafil Citrate is the active ingredient used to treat erectile dysfunction (impotence) in men. It can help men who have erectile dysfunction get and sustain an erection when they are sexually excited.
Generic Viagra is manufactured in accordance with World Health Organization standards and guidelines (WHO-GMP). Also you can find on our sites.
Generic Viagra is made with thorough reverse engineering for the sildenafil citrate molecule - a totally different process of making sildenafil and its reaction. That is why it takes effect in 15 minutes compared to other drugs which take 30-40 minutes to take effect.
[b][/b]
Even in the most sexually liberated and self-satisfied of nations, many people still yearn to burn more, to feel ready for bedding no matter what the clock says and to desire their partner of 23 years as much as they did when their love was brand new.
The market is saturated with books on how to revive a flagging libido or spice up monotonous sex, and sex therapists say “lack of desire” is one of the most common complaints they hear from patients, particularly women.