On Sunday night, a few of my friends and I held a little gathering/potluck to celebrate Lammas (also known as Lughnasadh or loaf-mass). It's an ancient Gaelic holiday honoring the first harvest, and folks traditionally dined on feasts of fresh bread and seasonal fruits and veggies. I contributed this Mediterranean Olive Bread from The Joy of Vegan Baking: 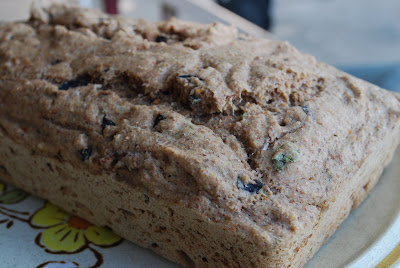 I'd been eyeing this recipe since I bought the book last year, and now I'm not sure what took me so long to bake it. This delicious quick bread is flecked with some of my favorite things — black olives, fresh basil, sundried tomatoes, and walnuts. I subbed whole wheat pastry flour for all the all-purpose called for in the recipe though.

I almost brought some of my Black-Eyed Pea Hummus for spreadin'. It's one of the recipes I'll be featuring in my cookbook. This is an old picture because I forgot to take another yesterday. 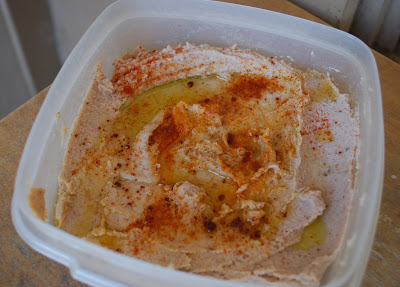 And for dessert, I brought another cookbook recipe, Old-Fashioned Coconut Pie: 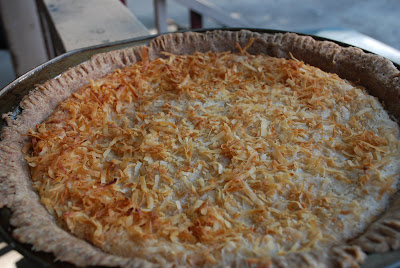 The pie is actually my Granny's recipe. She veganized her old recipe for coconut pie and it is amazing! My version didn't turn out quite as delicious as hers, but I think I know why. She calls for sweetened coconut, and since I only had unsweetened in the house, I subbed that instead. Apparently, it makes a big difference because the pie didn't seem sweet enough to me. It wasn't bad, but I'm used to Granny's perfect version. Next time, I'll know better than to make substitutions.

Our gathering wasn't strictly vegan, but some friends brought vegan bread. So I ate loads of bread, and my friends Monica and Kelly contributed tasty cherry tomatoes, cantalope, and fresh okra (which we fried) from their garden.
Posted by Bianca at 11:49 PM

yum it all looks awesome, especially that coconut pie. MMM.

Mmm, savory bread is the best! I bet it was delicious with the fresh vegetables.

I found that the bread didn't hold up well for leftovers. It was basically gummy and yucky the next day - have you experienced this? thanks!

Sounds like a great gathering filled with great food!

Well, that pie certainly looks amazing- I'm sure you'll get it 100% right next time.

I can't wait to check out that black-eyed pea hummus, that sounds like one of the stand-outs from your new book.

yum! i loved your BEP hummus recipe, so i'm sure it was a hit. and who doesn't love olive bread?

coconut pie? ooh, i'm checking your tester blog for that one. i think you and granny need to start a cable access or you tube cooking show, as both of you rock pretty dang hard. i'd watch it!

jews have a fall harvest called sukkot where we eat in a 3 walled tent to observe shelters we lived in when wandering in the dessert. now that i think about it, every jewish holiday revolves around some kind of food. we eat seasonal foods during that time too. it's pretty dang cool to see all the parallels between faiths and harvest festivals, every faith has one!

The picture for that bread in Joy of Vegan Baking looks really good...except I hate olives, haha. But it looks all chunky and wonderful.

I looove me some pie. Looks yummyyy.

everything looks amazing. a slice of your olive bread with some of that hummus = *DROOOOL*

I love that bread too! It's so wholesome (and I subbed wwpf too of course!) I also never use sweetened coconut, so I woulda done the same thing--still looks awesome though!

ok seriously when is this cookbook coming out?! i need to make everything in it so i can stop salivating at my computer screen!!

i pretty much just fell off the couch seeing at your coconut pie, Bianca - wow! i'm sorry it wasn't as sweet as your Granny's (i bet the unsweetened coconut was it, indeed) - but i'm glad it was tasty! i cannot wait to test it out! coconut pie is dan's favorite and i can't get enough of it! mmmmmmmm! the olive bread looks glorious, and i've never heard of Lammas - that's just too cool! you celebrate the neatest holidays Bianca - that rocks so hard!

Never heard of Lammas, but it sounds like delicious fun. The bread you made sounds like pizza quick bread, which could only be fabulous!

I've been meaning to try that bread from Joy of Vegan Baking too - I love the idea of this holiday, a perfect reason to celebrate! I bet the coconut pie is awesome.

Bianca: Oops, I left this comment on the wrong post! Oh, well, here it is again! As host of said Lammas celebration, I can definitely confirm that your bread and hummus AND coconut pie were delish! I especially liked the bread. And while I'm on the subject of your culinary prowess, may I add that the cupcakes you brought to Amber's birthday party were to die for! Thanks for your continued contributions! Love you!

Every time I read your blog I get more excited for your cookbook.
Coconut cream pie is one of my all time favorites.

Looks delicious to me! Mmm, pie!