On Saturday, I met up with my fellow vegan buds Stephanie (a.k.a. Poopie Bitch) and Lindsey (who doesn't have an a.k.a., but we should give her one!) for a day-long shopping trip at two farmer's markets. First, we had soy lattes at Bluff City Coffee in the South Main Arts District. Steph brought her famously-delicious Egg McVegans: 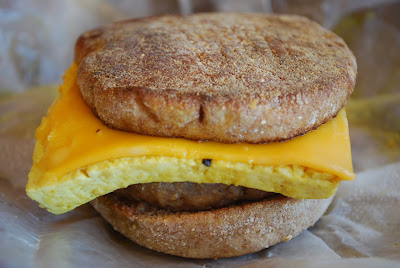 These are so much better than the real thing! The "egg" is made from tofu and topped with Tofutti cheeze and Gimme Lean faux sausage. It was the perfect start to our morning. After fueling up, we headed to the Memphis Farmer's Market, downtown's weekly Saturday sale of locally-grown fruits and veggies. 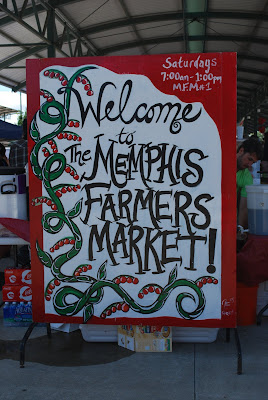 At the market, we ran into my buddy Uele of Groovy Foods, who makes the best vegan granola on the planet. She sells it at the market, and it's so addictive: 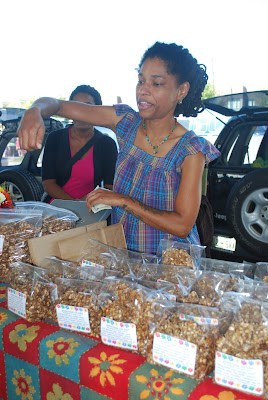 Then we saw Keith Forrester (he's ducking in the background), a local farmer who sells to-die-for heirloom cherry tomatoes from Whitton Farms. His wife Jill is responsible for those lovely flowers: 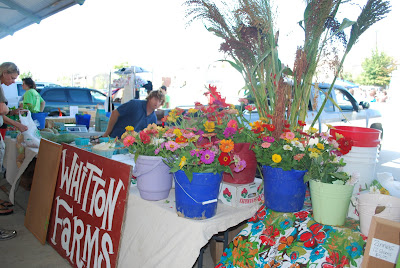 After stocking up on tomatoes, fresh corn, eggplant, okra, and some tasty vegan pre-made soups, we headed to the Winchester Farmer's Market (about a 20-minute drive from the downtown market). Even though the name implies that the Winchester store is a farmer's market, it's actually not one at all. Instead, it's a massive Asian and Mexican supermarket with a large selection of faux meats, exotic produce (not local), and steamed buns. I posed with my corn and goofy 80s shades outside the market's front door: 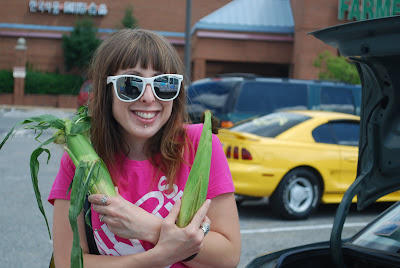 Inside, we found plenty of great deals on inari wrappers, veat "meat," and soy sauce. We also found some, um, interesting labels. I took this iPhone photo of Steph with a package of Cock Flavored Soup Mix (definitely not vegan!): 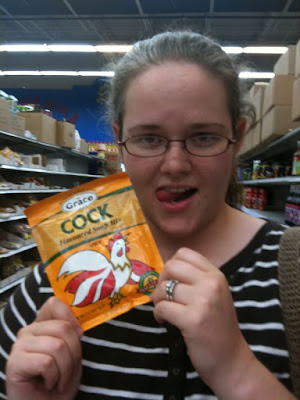 And Lindsey bought this huge bottle of Housewife Soy Sauce because she couldn't resist the funny label: 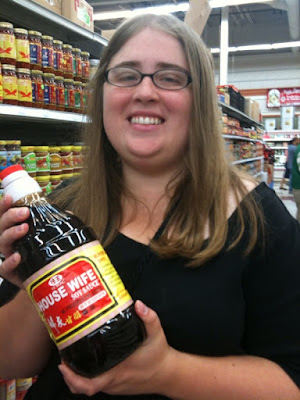 Finally, I'll leave you guys with this hilarious shelf tag: 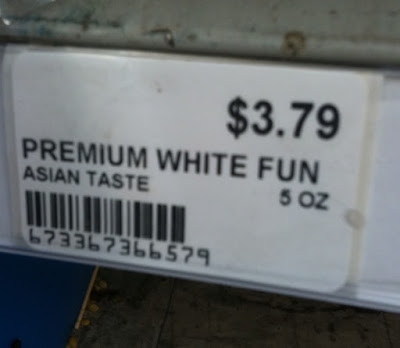 It was the price for a bag of dried white mushrooms, and we're assuming the "fun" means "fungus." After all, $3.79 sounds like too great of a deal for "Premium White Fun with Asian Taste." :-)
Posted by Bianca at 10:09 PM

oh my god! the pictures from the market are hilarious! Cock soup and House Wife sauce... i love it. Hee hee. thanks for the giggle.

I can't believe how lucky you are to have access to such an amazing farmers market. Everything looks so beautiful and fresh. Here there is NO organic food, everything is shipped at least 2,000 miles before it arrives and it is wilted and half moldy by the time we get a hold of it.

OMG, you totally made my morning. Those pictures are HILARIOUS! Now excuse me while I have some premium white fun ;)

Haha! I love the pictures! And that Vegan Egg Muffin looks extremely tasty...not to mention, wayyyy better looking than the one from the deathtrap of McDonalds. :)

i love crazy shopping days. i wish we had the type of vegan selection you have.... and i'm totally diggin' the labels... i would have bought the housewife sauce too. :)

Hahaa, sounds like a ton of fun...Premium White Fun, even?

I love the farmer's market, I have missed ours for the past month, almost. They're still having it, but me = lazy (actually, that's not entirely true, I was working out, but still).

One of the many cool reasons for me returning to Memphis is the Market, I am envious, but in the GOOD green way. I receive their e-newsletter and feel so close, yet am so far away...but soon, sooooon.
Great photos - way fun! and it looks like you had a grand time of it all!

Those egg McVegans look spectacular... i get something alot like it at a bakery near my house and i could eat it everyday.

What an awesome farmers market! Love the unintentionally hilarious packaging. :)

it appears that you had more than 5oz of premium white fun. i love finding funny food labels. every time i'm in the local co-op or at kroger's i'm always sniggering at the "fruity booty".

I#d take a bag of that white fun. Does it come in other colours as well?
Man, I wish we had such a fantastic farmer's market.

you guys are a hoot!

Haha, those labels are so funny! I would have had so much fun looking around that store. The Egg McVegans look awesome too, almost like the real thing...and probably 100x tastier.

So fun!! And I love the market photos especially.

I love it that you are wearing your New Kids shirt! Yay! I wanna go to the farmer's market with you! Your friend Uele looks like my friend, Lindsey, that I toured with. Anyway, when do I get to see you again???

I love the shades!

premium white fun made me laugh out loud! thanks, Bianca! i love your shades - and it looks like you and Steph had a blast! hooray! the farmer's market looks amazing, and i love that you kicked off the day with soy lattes & egg mcvegans. hellz yeah!

Wow, that cock flavored soup mix is killing me! I scared the cats I laughed so loud!

oh my goodness...so many informative things in this post! first of all, loooove bluff city coffee and the downtown farmers market! but you KNOW Uele? I'm so jealous! she's like a celebrity to me...her granola is one of the best things i have ever tasted! i have always wanted to try some of her other things at the market...maybe when i get that job ;) and there's another market?! i have to go to that! thanks for the info! i can't wait

Check the ingredients on the "cock-flavored" soup, actually - a friend of mine bought a packet because she thought it was so funny, and I read the one she had, and it WAS vegan!

I'm totally envious of that sandwich! I want the recipe now. LOL

The photos of the Farmers market make me so homesick for Memphis!! I lived there from 1984-2000, from my teens until grad school and beyond.

Now, I'm in Holland, where the idea of a vegan Celiac is just too much for most restaurants to take! So, I'm eating at home a lot & using lots of yummy blog recipes like yours to keep me happy.

I could go for an Egg McVegan Yum

gosh some of those labels!!!

Awesome, I love egg mc vegans! We don't have gimme lean sausage though so we have to make o with a vegan bacon slice!

Love the pics from the market too.

Nothing beats the can of Cock-a-Leekie soup I found in London. We had premium white fun laughing at it, let me tell you.

Exciting! I get an appearance on Vegan Crunk! It was indeed a day full of premium white fun and EGG MCVEGANS!!
My husband loved the soy sauce, by the way, hahaha.
Great job documenting the day :)

So I ran across your blog from another vegan blog, and I was soooo excited because you are from Memphis. I was raised right across the river in Arkansas, Blytheville, Arkansas to be exact. And I'm commenting on this post because I used to go to that grocery store all the time when I lived at home. My dad is actually friends with one of the owners! But I just thought it was awesome that I actually know where it is that you shop!