Omnis are missing out. As vegans, we eat such a wide variety of foods that the average McDonald's-loving, Wal-Mart-shopping, meat & potatoes omni hasn't even heard of. Think about all the burger options we have — bean burgers, soy burgers, garden burgers, and endless protein and grain combinations for homemade patties. Despite popular omni belief, we also have more than one option for a tasty grilled cheeze sammich. 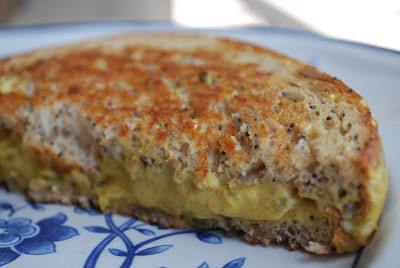 The "cheeze" is a nooch-based sauce, thickened to a paste and spread on Earth Balanced whole grain bread. It's grilled to perfection and oh so delicious. I've had nutritional yeast-based grilled cheezes before, but it's been awhile. I typically go the easy route and melt some Follow Your Heart or Teese between my bread.

VV's recipe is here. It's really simple and worth trying out, especially if you've not tried a noochy grilled cheeze. There's something magical and comforting about nutritional yeast that I just can't put into words. Note: I substiututed the pickled jalepenos in the recipe with fresh, minced jalapeno since that's what I had on hand.

On the side, I made some Dillweed Potato Salad from my cookbook: 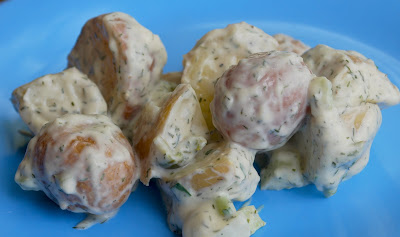 The potatoes are local and organic, and as you can see, I don't play when it comes to dill. I like a lot of dill, so my tater salad recipe calls for a ton.

I typically make this with Vegenaise, but this time I used the last of some Nasoya vegan mayo that I bought with a coupon at Whole Foods. I'm not crazy about that brand. It reminds me more of Miracle Whip than mayo. I doubt I'll ever buy it again. But on the bright side, Nasoya has way less fat than Vegenaise. That means I can eat more tater salad without the guilt.
Posted by Bianca at 11:24 PM

that sandwich looks good! im intrigued...for some reason cooking with yeast intimidates me though!

Emily, dont' be intimidated cooking with yeast. :-) It isn't like yeast for baking, it is just a cheezy powder that thickens everything up a tad and makes the best flavor explosion EVER.

Oh man, I love grilled cheeze sandwiches and I haven't made one in forever! That needs to be fixed ASAP! Thanks for trying my recipe, Ms. Crunk.

I love the look of your potato salad, another thing I haven't had in too long. Hahha, I like dill too, so our salads would probably turn out very similar!

And you are so right; vegans have SO many options! I can't believe that people are seriously stumped when they ask me 'but what do you eat?'

I eat a wider variety of food now that I am a vegan than I ever did when I was an omni and just relying on the same old chicken, eggs, and blah recipes. Now I think outside of the box and I love to try new things. Great post!

oohhhh that looks so great! i've never had vegan grilled cheese, and didn't like it before i was vegan, so it would be a real adventure for me! i'll get there..i have the ingredients to make a cheesy soup from the uncheese cookbook though, so first things first!!

next time someone ask me what eat am going to scream. when i was an omi i was so bored chicken and rice , pasta and this etc. I eat so many different grains now i am vegan and i have yet to repeat a dinner meal only if I want to. I have a potato salad recipe with dill too but my dill in my garden is too tiny to pick so I will wait.

Ever since I've become a vegan, I've eaten foods I have never even heard of! So yes, I totally agree vegans have more options.

so true, people are always saying - so what can you eat then??

that cheezy sandwich looks awesome, i need to give it a go, STAT!!

vegans definitely eat a wide variety of foods. that's why i hate when people say stupid things like "what do you eat, tofu and lettuce?" they just sound so ignorant. and i LOVE nooch! it's one of my favorite ingredients as a vegan. by the way, you'd probably really like the potato salad at real food daily. it's soooo yummy. :)

i notice that too about the nasoya mayo - it is totally more miracle whip like. i kinda like it for coleslaw, potato, & eggless salads, but i prefer vegenaise for tuna-free & pasta salads. so true on less fat & calories than vegenaise - i'm willing to compromise taste sometimes so i can go extra on the vegan mayo! your potato salad looks spectacular, and hellz yeah on the grilled cheeze. next time we make 'em we're gonna use fresh jalapenos as well - the vinegar taste from the jarred ones took over last time. sadface. nooch = comforting to me, too! happy weekend times, Bianca! yay!

...*whimper* You say Nasoya tastes more like Miracle Whip? That's what I was RAISED on. I must track it down and try it! I do love my Vegenaise, but there are some things that require the taste of my old stand-by. Thanks for the inadvertent tip! :D

I'm a little obsessed with Vegenaise. I eat it off the spoon sometimes! They just came out with a low-fat version. I have some in my fridge, but haven't tried it yet. Their products are pretty awesome, so I bet it will be great!

I'm with you on the Nasoya - I recently used some on macaroni salad, and although Vegenaise is MUCH better, it is nice knowing that you can consume mass quantities without the guilt of all that fat. :)

I agree! People think vegans only eat lettuce and apples, but we're much more adventurous than the general population! The vegan will always win a Name That Whole Grain contest!

i'm excited about this sammich. i've been feeling like not cooking lately so i sense a BIG sammich themed week. perhaps this will be on ye list.

i heart nooch! i agree vegans really do have more options than omnivores. omnis tend to get stuck in ruts with flesh, foul, fish, and cheez. with veggies, fruits, nuts, and soy the possibilities for wraps and sammies are endless. endless i tell you!

Echoing what everyone else said, you are so right in saying that vegan eating = variety, taste and so many options.

You are so right! People often ask me what I eat and when I tell them, they haven't heard of many things. I know I've said this before, but: I cannot wait for your cookbook!