No Dirty South cookbook would be complete without a jambalaya recipe. I'd been planning an eggplant jambalaya recipe in my head for ages, but I finally got around to bringing that idea to fruition this week. Bam! I bring you Eggplant and Creole Sausage Jambalaya: 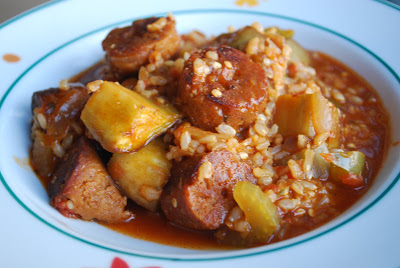 Sauteed eggplant (sans the skin, but you can leave it on if you're into that sort of thing) meets spicy creole-flavored steamed sausages, brown rice, fresh veggies, tomatoes, and plenty of heat. The sausages were inspired by the Julie Hasson method of steaming sausages, but I came up with my own New Orleans-inspired flavor combo. They're also a little softer than the Julie sausages, which is nice since these are sliced and pan-fried.

I served my jambalaya with Roasted Okra Pods: 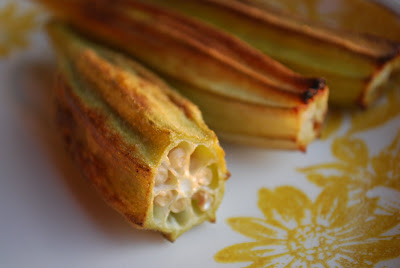 I have to think Erin of Vegan Homemade for introducing me to this technique of roasting whole okra brushed with a little olive oil and salt. I've always fried it or boiled it in soups and stews. But this preparation was equally delicious. Thanks Erin! Oh, and thanks Melinda (my co-worker) for gifting me with fresh okra from her garden.
Posted by Bianca at 11:57 PM

Wow! That jambalaya is so beautiful, can't wait to buy the cookbook so I can get my hands on that recipe. My hubby's father is from Louisiana and if I could veganize such a classic Southern dish I would be a hero!

And I LOVE the idea of whole roasted okra, can't wait to try that!

Yum! I've never been a fan of okra but roasting in oil and salt makes anything good...

Jambalaya has to be one of my favorite meals. All the spice and veggies...yum.

Roasted Okra is amazing, that's the only way I'll cook it now!

Jambalaya - how could we live without it!
Looks soooooo wonderful - in my opinion there's virtually not one thing that cannot be veganized.
You've done it again!!

Looks great! Can't wait to buy the cookbook. I'll have to try the roasted version of okra. I love those lil buggers (as long as they're not slimy) and am always looking for great ways to cook them. I tried grilling them once and wasn't impressed. Of course my favorite way to eat them is to fry em up ;)

I love me some okra! And eggplant in jambalaya? Count me in!

Fresh okra from you friend's garden? Lucky you! And that jambalaya looks fantastic - it'll be one heck of a book!

eggplant and creole sausage jambalaya?!?! yes, yes, YES! it looks awesome & scrumptious, Bianca! i can't wait to give it a whirl - and i can't wait to try roasting up some okra, too. i'd never thought to do that either - thanks for sharing such a delicious idea! happy weekend times & happyfaces to you! :)

that looks great! i'm not a fan of okra myself, but i saw on some show called bbq university-(fyi:meatfest) the host made a side of bbq okra by brushing the okra with olive oil, sprinkling it with sea salt and black pepper, then throwing it on the grill.

I think I've had okra, but I cna't even remember what it tastes like! You're a Southern inspiration, Bianca :)

I haven't had jambalaya since I've been a vegetarian. I bet your vegan version is awesome!!!!!!!
-A

That looks so delicious! I can't wait to try it. Sorry I haven't been testing very much lately - this summer has been crazy. I promise to get back into the groove in a couple of weeks!

Yum. I want to have dinner at your house!

Would you believe I've never cooked okra? I've eaten it in restaurants, in stews and things, but I don't really know what it tastes like on its own. Yours looks delicious, I'll have to try it.

Jambalaya is one of my favorite dishes ever and this looks just fantastic. Add me to the list of eager seekers of your cookbook!

Also, I'm a brand spankin' new-be, but check out my blog if you'd like.

The jambalaya looks awesome - eggplant is great in stuff like this. Can't wait for the cookbook to see how to make the New Orleans-style steamed sausages :) Never tried roasting okra - I bet that's good.

yum that looks delicious. I haven't had jumbalaya since going vegan.

That jambalaya looks sooooooo tasty! I can hardly wait to try it out!

you know why you are so awesome? well, i will tell you.
you totally read my mind and knew that i bought fresh okra for the first time today. and now i know a fabulous way to prepare it! i heard it was good raw so i was gonna crunch on it that way. thanks!!!

This looks yummy! something like I saw in one of Kristen's Raw ebooks.

I am currently converting to become a vegan so I need as much information as I get!

I love her desserts though! They look SO good!

Check it out sometimes!

okra is on my "to try" list! i love the idea of roasting it. sounds so simple! i've never seen okra in the stores, but then again i have never really looked for it. hopefully whole foods will come to the okra rescue!

Roasting is the one method I haven't yet tried for okra. Sounds like I may like it!

That creole looks like it would put hair on your chest(in a good way though, lol)
I've never had creole before, but this dish of yours has inspired me to give it a whirl!.
Sophia,
http://whatyourmommadidntknow.blogspot.com/

Oh, yay! I'm glad you liked the roasted okra. Other than in gumbo or succotash, roasted is pretty much the only way I eat it now.