I learned a new word at breakfast today, thanks to the creative title of Bryant Terry's steel cut oats recipe in Vegan Soul Kitchen — Brown Steel (Cut Oats) In the Hour of Quiescence: 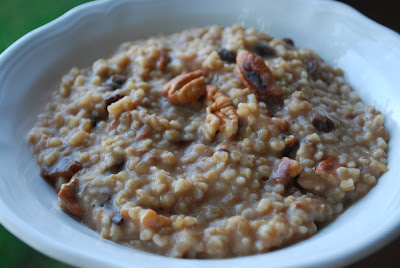 "Quiescense" refers to a state of being quiet, still, or at rest. It's more commonly used in its adjectival form — quiescent. These creamy oats — cooked in almond milk and topped with maple syrup, raisins, and toasted pecans — certainly offered a relaxing start to my Monday morning.

In Vegan Soul Kitchen, Terry offers soundtrack or movie suggestions for each dish. For this one, he recommends "Black Steel in the Hour of Chaos" by Public Enemy (see where he gets the cute name for the recipe).

Though I love me some Public Enemy, I prefer to listen to my politically-charged rap in the afternoon rather than at the crack of dawn. So no Chuck D for me this morning ... just a comforting bowl of quiescent oats.
Posted by Bianca at 11:18 PM

I just un-earthed your lovely bloggie from the buried depths of my googlereader. And look what i've been missing....lovely awesome food! Like these oats. Mmmm-hmmm. Lookin' good. The bowl does look peaceful and I could see where it could put a peaceful start to your day. Sigh. My day was anything but. But I did start off with yoga which for me is the best attempt at peace :)

A perfect breakfast! And I agree with you...Public Enemy in the afternoon sounds better. I prefer my breakfasts quiet, too.

I haven't had steel cut oats in so long! I must make some soon!

I love cookbooks that give musical suggestions!

quiescent oats.... mmmmm... they looks really creamy and wonderful! I almost want a warm scarf to put on just looking at them!
-A

funny he suggested that particular song for first thing in the morning. i do like song themed food. i remember your b-52's entry from a long time ago!

MMM that looks so perfectly creamy and wonderful! Sometimes I scoff at oatmeal recipes in cookbooks, because, well, it's just oatmeal! But every once in a while I learn a really good trick or preparation enhancer that makes it worth making at least once, and this looks like it might be one of those! :)

How are you finding his cookbook? I've read through it a couple of times, but I haven't yet made anything from it. The watermelon recipes look really good, particularly the ones involving alcohol ;)

I've been without a PC since the day of "BAM!", and look what I've missed-all the "food, glorious foooood". Steel Magnolia Cut Oats - I love the comfort of steel cut oats, ...and all the other selections - zowie. And the t'aboulie is, - t' live for. One of my favorite box hot cereals is "Bear Mush" from Arrowhead Mills.
Thanks for the yummy suggestions!

I'm all over oatmeal in the coming months... I'll have to check Bryant Terry's recipe out!

Every time you post a vegan soul kitchen recipe - i tell myself i *must* get that book!

I am Glad i found this web site.Added vegancrunk.blogspot.com to my bookmark!