In July, while camping at Veganstock in Asheville, North Carolina, I had the pleasure of meeting fellow PPK-er and Tennessean JohnP. He lives in Nashville most of the time but also has a house in Asheville. Since our homes in Memphis are only three hours away from Nashville, John invited Stephanie (Poopie Bitch) and I to the NashVegan Picnic Potluck in Dragon Park this past weekend.

I wanted to bring something savory and something sweet, so I settled on the Quinoa Tabbouleh (with added chickpeas) from The Vegan Table: 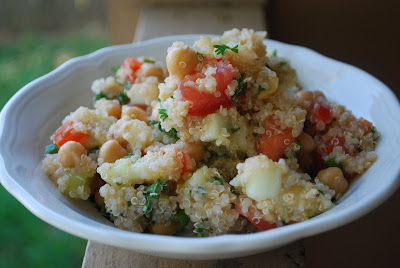 And the Mini Jelly Donuts from Vegan Yum Yum's donut recipes in the new Vegetarian Times: 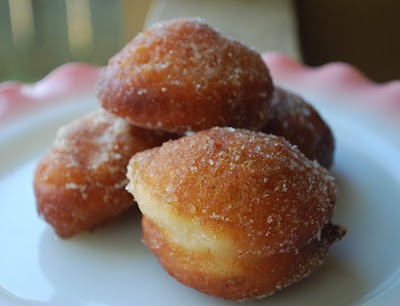 The quinoa was tasty, but the raspberry jam-filled donuts were absolutely amazing eaten straight out of the deep fryer. I had to make them on Thursday night for Saturday's potluck, so they weren't quite as fresh when everyone else got to try them. But all 20 or so donuts were gone by the end of the potluck, so they must not have been too stale.

About 10 awesome vegans showed up, all bearing more food than any of us could finish off. Here's my first plate: 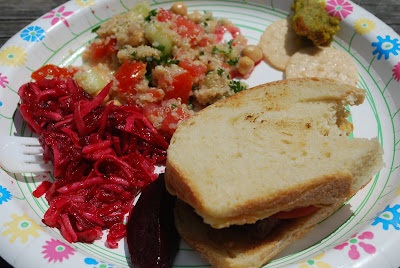 The sandwich was JohnP's contribution — a "chicken"-fried tofu sandwich with gravy spread. So, so delicious! Steph brought the Pineapple Beet Salad from the Veganomicon, a recipe I'd never even noticed before. It was really tasty. I heart beets!

On the far side of the plate, there's a schmear of raw pimento "cheddar" nut cheeze that JohnP purchased at the Nashville Whole Foods. A local woman makes and markets several flavors of raw nut cheezes in Nashville and it was so amazing. I wanted to buy some to bring back, but a package of it was priced at $13! Too steep for my broke ass.

After the main courses, we pigged out on dessert. Besides my donuts, there were JohnP's delicious Red Velvet Cupcakes (the icing melted a little in the hot sun) from Vegan Cupcakes Take Over the World: 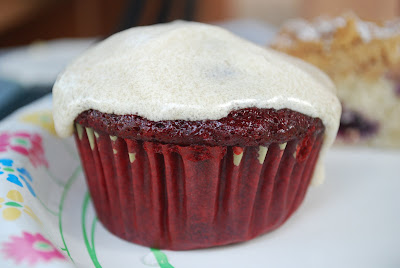 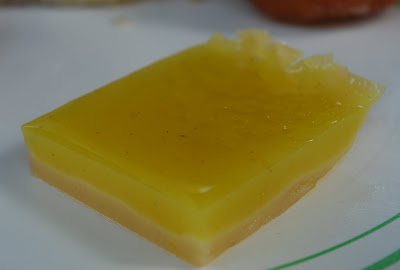 These were amazingly lemony! They get their jelliness from agar-agar. 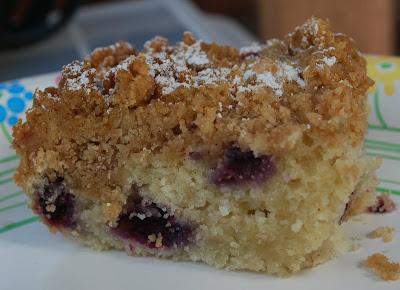 By the time I finished my dessert plate, I was miserably stuffed ... like on a ridiculous Thanksgiving level.

The park where the potluck was held is actually called Fannie Mae Dees Park, but it's nicknamed Dragon Park. See why.... 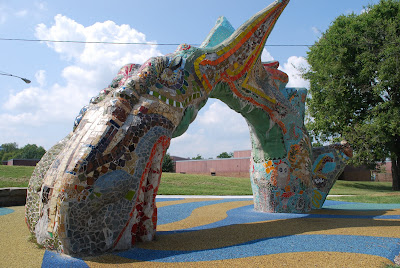 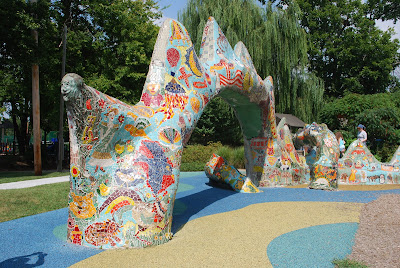 Cool park! :)
I've always wanted to go to a vegan potluck. It's my dreaaammm. The donuts look adorable!

That looks like fun! Your donuts look amazingly delicious, as do all of the desserts. The savoury's look yummy too, but who can pass up those cakes!

Ah man! Looks like fun and such good food! I made Quinoa salad tonight. I wish I would have thought of adding some chickpeas, but it turned out really well!

Hahaha! I bet those donuts tasted great right out of the deep fryer! I'm not sure what wouldn't! They look gorgeous, too.

I want to go to a Vegan potluck....sigh, maybe someday!

The donuts were amazing!

Your post made me smile on a dreary Monday morning. I used to live right around the corner from Dragon Park. Makes me happy to know that such delicious-looking vegan tasties are being enjoyed at one of my favorite little hide aways! If you're ever up around Baltimore (my new home, sweet home,) there are some great parks here that would be perfect for a vegan potluck picnic!

What a cute name! And now I'm craving red velvt cupcakes like mad. Obviously there's nowhere around here that sells vegan ones, so if I want one, I'm going to have to make my own...

Oh, Dragon park--I miss you so much... What a great idea for a great place!

NashVegan! I am sorry I wasn't there. The sandwich! The donuts! Oh my.

Sounds like fun! I'd love to visit Nashville someday, people are always telling me how nice it is. It looks like you guys brought enough food to feed an army, lol.

Your donuts look great! I've had my eye on that recipe for a while, I've never made my own donuts before.

I want to stuff my face with a giant plate of those donuts, they look amazing!!! I haven't had a donut in years.
I have been thinking about making that recipe for awhile now, I think I just may have to now!
Sophia,
http://whatyourmommadidntknow.blogspot.com/

I love the Dragon Park. It was the first place my husband and I went to when we first moved to the Nashville area.

That looks like so much fun. Oh my gosh at the donuts!!!

those doughnuts look like sufaganiot, a type of cutesy jelly doughnut eaten during chanukkah! way to go!

i'm hosting a vegan brunch soon, but i seriously doubt you'll wanna drive 8+ hours to get to bloomington.

that settles it, you'll just have to move here. (nudge-nudge) we could have a public access cooking show.

i love the dragon! so very awesome on the vegan potluck! i would have stuffed myself silly - cuppies, coffee cake, raw (and local!) nut cheeze, sammies, and your tabouli looks so pretty & tasty! i looooove your mini donuts, too! i'm droooooling & wishing i had all 20 of them to myself! mmmmmmmmm!

What a spread of eats!! Love those donuts, especially :)

Oh my god, I don't even know where to start with the awesomeness of this post! Those donuts look super awesome, I'm really going to have to try them sometime.

I need to hurry up & try the east coast coffee ccake from vegan Brunch too, it looks yummy!

Oh my goodness - those donuts were wonderful! And the quinoa was really good too.

I think Theresa made those tasty lemon bars...

That looks like so much fun! What a great spread of vegan food.

so jealous... and how did i miss such a rad little park when I was there? must.visit.you. :)