A Few Meals I Didn't Make

I didn't cook again tonight! I know, right? What's with me lately? I actually went out for sushi (avocado rolls and inari, of course) at Edo's Japanese Restaurant with my buddy/co-worker Shara. But I've got a few photos stashed away that I've snapped recently at Memphis restaurants (no sushi pics ... it was dark in there).

There's a perception that Memphis isn't a very vegan-friendly city, and while we're a far cry from Portland (aka Vegan Mecca), we do have plenty of options. Take for example the Garden Burger at Cafe Eclectic: 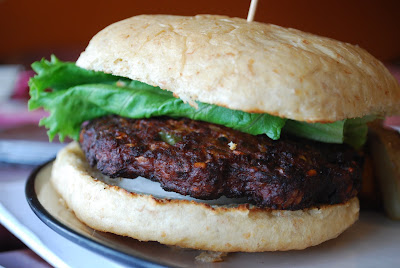 Best black bean burger eva! They call it a garden burger, and maybe there are some veggies in there somewhere, but it's mostly chargrilled spicy black beans. I like it that way. It comes with a tasty side of roasted white and sweet taters.

DejaVu Creole Soul Food & Vegetarian Restaurant boasts a large vegan section on their menu. And all of their delicious soul food sides — collards, smothered okra, candied yams — are vegan. One of my new favorite meals at DejaVu is this Mock Chicken Salad Sandwich: 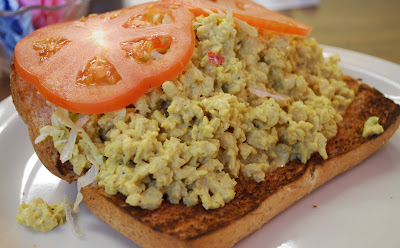 The "chicken" is made from TVP and some other stuff that tastes pretty convincing, but not in a creepy "could it really be meat?" kinda way. This is also served on whole wheat, and the carb conscious (silly people!) can choose to have their mock chicken served atop a bed of greens.

The Hi-Tone Cafe — a hipster rock club by night — morphs into a happenin' brunch spot every Sunday. Though service is sometimes slow, it's worth the wait for this tasty Tofu Scramble Platter: 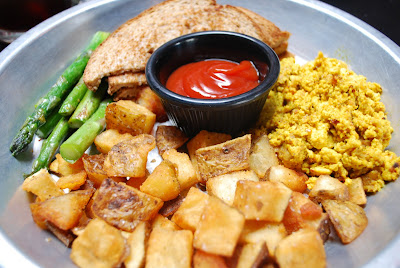 The scramble is deee-licious, and it's served as roasted asparagus, some damn tasty home fries, and toast.

Chef Bastet, an awesome local herbivore who's started many a vegan venture in Memphis, is currently heading up a vegan lunch delivery service with a rotating daily menu. Every Friday, Bastet's Healthy Meals on Wheels has Pizza Day! Her BBQ Mock Chicken Pizza is the bestest! 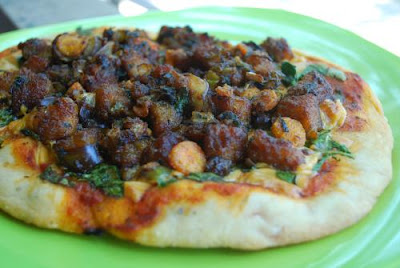 I can't even tell you how good this is — fried mock chicken, vegan cheeze, spinach, and chopped carrots atop a homemade personal pan-sized crust. And Bastet's not stingy with the toppings. One personal pan lasts me two meals!

Anyhow, there are way more vegan options in Memphis. I submit at least one dish picture a week to Veggie Thing, an awesome vegan restaurant food pic site, so check that out regularly for more ideas.
Posted by Bianca at 11:43 PM

I had no idea that Memphis was so vegan-friendly! The foods looks delicious!

I think I'll be putting Memphis on my lit of places to visit, I need that mock chicken sandwich!

This post was AMAZING! I'm drooling here, I haven't eaten lunch yet and I can't handle all this deliciousness! When I saw that TVP chicken salad sandwich it was a DUH moment, why haven't I tried that yet!?!?! And that black bean burger - it looks grilled to perfection. Oh that pizza....I think that image is burned onto my retinas! I can imagine how scrumptiously awesome it is.

Yum! That mock chicken salad sandwich looks delicious. That reminds me, I need to make some of that soon for my lunches. :)

That's awesome, lots of veggie-ness. I've only ever been to the Memphis airport...which wasn't incredibly vegan friendly, but we did get cookies!!

I'll have to make the trek out to Memphis! Everything looks great; my favorite is the mock BBQ chicken pizza.

Love that brunch platter! It's so simple I don't know why more places don't do it. Here in Ottawa we have three places that will do vegan brunch, but only two of them use tofu (the other one is pancakes) and most of them don't open until 11 AM, which is long after I get hungry!

I don't mean to be a buzzkill but are you sure that "garden burger" is vegan? It looks exactly like the Morningstar Farms Spicy Black Bean Veggie Burger (I recognize the scallopped edges), which isn't vegan.

Oh my gosh!!! That food needs to get in my belly ASAP!

That tofu scramble is calling my name, yum! Everyone deserves a break sometimes. :)

Laura, the Garden Burger at Cafe Eclectic is a homemade patty. It's just very chargrilled....they list it under the vegan section on their menu, and I trust them.

i've never thought memphis wasn't vegan friendly, but i did suspect among the catfish stands and rib joints, there wasn't much to choose from. boy howdy, was i wrong! thanks for giving me the vegan tour o' memphis. someday i hope to come back soon! the last time i was there was in 2001 or 2 to see jello biafra at the new daisy theatre.

I just abso-love following your blog!
Another great one today - and I TOTALLY agree with Voracious Vegan - AMAZING, and so wonderfully wanting me to cook everything on this post!
...yes, the burger looks sooooo goooood.
Must Have Bean Burger Now.
Yeah, Memphis is, gratefully so, becoming more and more Vegan as we blog...CAN'T WAIT to return!
Thanks Bianca!

Everything looks amazing, but that pizza is by far my favourite! Major good vegan eats in Memphis!

The mock chicken pizza looks RIDIC. just wow. Looks like you got some pretty good options there besides it not being Portland! Do you ever draw inspiration for your cookbook recipes from that soul food restaurant?

i went to memphis a few years back when i just vegetarian... what i missed!! that pizza takes the cake, though. awesome!

who knew memphis has so many delicious vegan yummies to offer! wowzers! the black bean burger, mock chicken pizza, and plate of scramble look super stellar! that's so cool that there's a vegan lunch delivery service. oh, i wish we had something like that in richmond! so awesome that you can get some vegan soul food, too! so, so glorious! mmmmmmmmmmmmmm!

ooo... i am an tofu super fan! sigh. i want the spicy tofu sooooo badly right now. with rice.

Here I bought a sauce pack so as to skip all the seasonings! and i will try this friday after work.
http://yummiexpress.freetzi.com

omg thank you for this post! i know cafe eclectic very well...and their garden burger, but ESPECIALLY their taters are my favorite because there are sweet ones in there! but, i had no idea about deja vou or the maker of that delicious looking pizza! do you have to have several orders for the catering service or does he/she serve individually somewhere? wow, yumm to everything, thanks!!!

Gainesville was kind of like that too - there were plenty of options for eating out, you just had to find them or know where to look. I like the lunch delivery idea, I've been tossing around the idea of starting something like that out here.

thanks so much for this post. I'm going to memphis in september for my honeymoon. Can you suggest any other places to eat. We will be there for a week. Thanks again!