Saturday was my best-friend-in the-whole-world Sheridan's 29th birthday! We've been BFF's since 8th grade! But now Sheridan lives in Little Rock, a two-hour drive from my home in Memphis. Not bad, but we don't get to see each other nearly enough. I drove down to celebrate with her this weekend. Here's Sheridan and her boyfriend Drew (wearing his fake mustache): 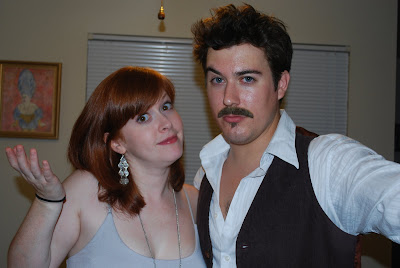 Yes, Drew wore a faux 'stache to Sheridan's birthday celebrations. We went to a tapas bar and a dance club with an awesome group of Sheridan's friends. But first, we noshed on Butterscotch Vanilla Cupcakes: 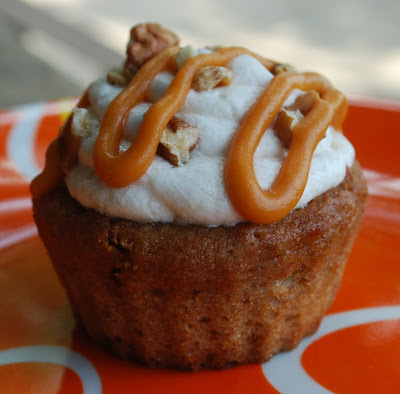 When I asked Sheridan what kind of cuppies she'd like, she requested butterscotch. I didn't have a recipe, so I just made the Sexy Low-fat Vanilla Cupcakes from Vegan Cupcakes Take Over the World and added chopped butterscotch chips (the Food Lion brand is vegan). Then I topped them with a basic buttercream, a butterscotch ganache (made just like the chocolate ganache in VCTOTW but with melted b-scotch chips), and toasted pecans.

A few of Sheridan's friends read my blog (hey, Joel, Kayce, Ashley, Lauren, and James!), and when they heard I was coming, it was requested that I make a post-birthday vegan brunch for the whole gang on Sunday morning. Of course I was stoked (yes, I'm bringing that word back) to cook up brunchy yummies for everyone. 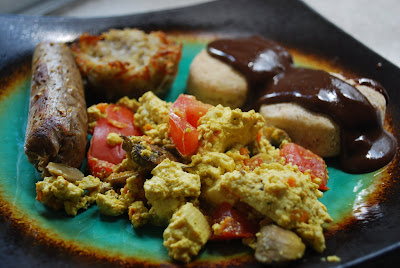 The scramble was my own recipe for cheeze "eggs," and everyone seemed to really like it. That's a good thing because I'm including it in my cookbook. Personally, I like my scramble better than most others I've tried. I think every vegan likes their scramble recipe the best though. Here's my recipe.

The sausages were the Cherry Sage Sausages from Vegan Brunch minus the cherries. I've made them with cherries before, but this time, I opted to leave them out since dried cherries are like $5 a bag. I don't think I even missed them. They were still as tasty as ever.

The hash browns were the Individually Baked Hash Browns from Vegan Brunch, and honestly they weren't my fave. The texture just wasn't right. Even though we squeezed all the water out, as the recipe instructed, the potatoes were still too starchy. They weren't bad, just not my fave.

And the biscuits and chocolate gravy are also from my own recipes, and they're going in the cookbook. This is one of my favorite breakfast treats, so I'll leave ya'll with a close-up: 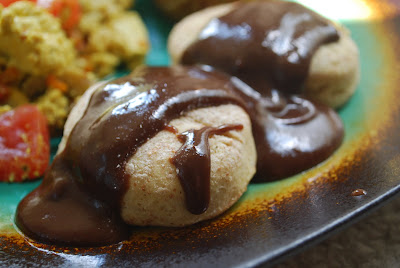 Those cupcakes sound amazing. Lucky friends, you making them all those brunch goodies, they all look great.

Happy birthday to your friend!! And hey, would you be willing to make those cupcakes for MY birthday in April??? :-D

Your brunch and cupcakes look delicious! I am sure Sheridan had a nice birthday with you there. You are such a nice friend!

The cupcakes sound awesome! Your brunch is mighty good-looking as well.

Your friend is so lucky to have you.... she even got a personalized cupcake for her b-day! She should be "stoked." There... I'm passing it on! :)
-A

that breakfast looks pretty tasty tasty. chocolate gravy? you amaze me. and that butterscotch cupcake looks amazing too. my birthday is in late december, care to send me some christmas cookies or something when the time comes?! haha.

Ooohhh, I still want to make the biscuits with choc gravy. Last time I tested my dad thought it sounded gross and so I made the sage one. But I REALLY wanted the choc one!

looks really good. happy bday to your friend.choc gravy, i would never think..

happy birthday wishes to Sheridan! yay! how awesome that they requested you cook the post birthday celebration brunch. that's so awesome, Bianca! sorry the hash browns were a bit disappointing - your whole plate of awesomenesses looks most glorious though! especially your chocolate gravy biscuits! mmmmmmmmmmmmmmm! might i add that you always make the yummiest look'n cuppers!?!

oh, and hellz yeah on bring'n back stoked. that rocks socks! w00t!

I AM STOKED and YOU ARE THE BEST FRIEND EVER! Thank you for an amazing birfday weekend and the tastiest cupcakes and brunch I could ask for!

Oooh, I remember those biscuits and chocolate gravy! Your brunch looks fantastic.

Butterscotch cupcakes and chocolate gravy?! Everything looks luscious! You are like the vegan Willy Wonka.

And they are precious. I really thought that mustache was real though.

Drew's slightly peeved that you outed his stache. Hahahaa! What's so silly is he can totally grow one that looks just like it!