LuLu's is Opening a New Place!

My friends at LuLu's — a worker-owned bakery serving vegan pastries and sourdough bread — have been popping up at the Cooper-Young Farmers Market every week for a few years. And they're also at Boycott Coffee most Wednesday mornings. For a brief time during the pandemic, they had a permanent space downtown. But it was inside a food hall, and the owner decided to close the whole place. So they were back to just doing pop-ups again for a while.

But they're getting ready to open a new space again! This time, it'll be in a shop across from East High School on Poplar (in the old donut shop that had a sign that looked more like a butthole than a donut ... some folks around here called it "Butthole Donuts"). Anyway, the butthole-donut sign is gone, and LuLu's will be selling their breakfast sandwiches, hand pies, cookies, bagels, sourdough loaves, cake, and more there very soon.

They had a pop-up in the new space a couple weeks ago, but it was the same day that I was running the Stanky Creek 25K. I'd hoped to be done racing in time to get there, but the pop-up ended at noon. And I was still enjoying my post-race beer at the finish line. But no worries — my friend Stephanie of LuLu's asked me what I wanted. She saved a few things back, I Venmo'ed Don from LuLu's, and then Stephanie hand-delivered the goods to my house. That's great customer service (and it helps that Stephanie and I are essentially neighbors).

I got the Breakfast Sandwich with tofu egg, cashew cheese, pumpkin seeds, and smoked apples. A perfect post-race treat! The smoked apples were next level. LuLu's pretty much always has some kind of breakfast sammy with tofu, but the other fillings change seasonally. 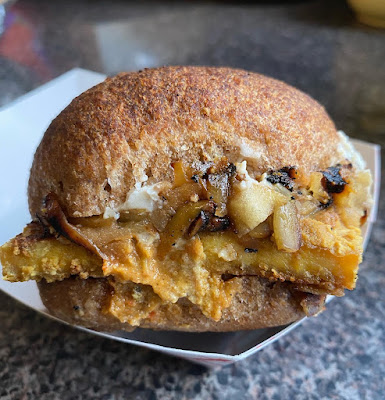 And I got a slice of Vanilla Sheet Cake, baked by Stephanie. She's a master cake maker, and I'm so glad there will be a regular spot to pick up her cake again! 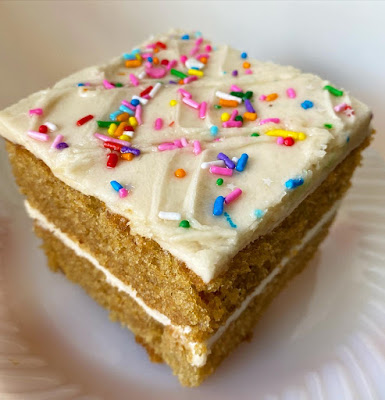 They don't have a set opening date yet, but you can follow their progress by signing up for the newsletter!