Breakfasts and Quinoa (But Not Together!)

I do love breakfast quinoa porridge, but this post isn't about that. Rather, I've got some pics of breakfast, and I've got some pics of quinoa. On Friday, I tried making a Just Egg and veggie omelet, but the "egg" stuck to the pan, so I ended up with a Veggie Just Egg Scramble. This has happened with my last few Just Egg omelets, so I think I need a new nonstick skillet. For the veggies, I added carrots, red cabbage, and bell peppers (just what I had laying around the fridge!), and I also mixed in some Sweet Earth bacon. And I had toast with grape jelly and oat butter on the side. Grape jelly really is the best jelly. 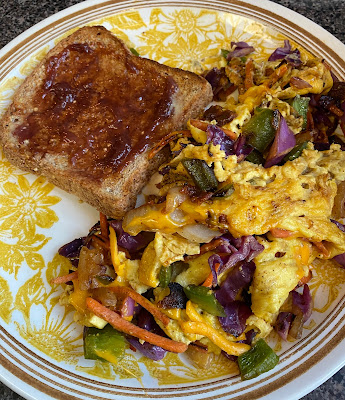 Here's another scramble, but this one is a Tofu Scramble. I added some vegan cheddar shreds for extra tastiness, and there's more veggie bacon and sourdough toast on the side. Forgot I had grape jelly! 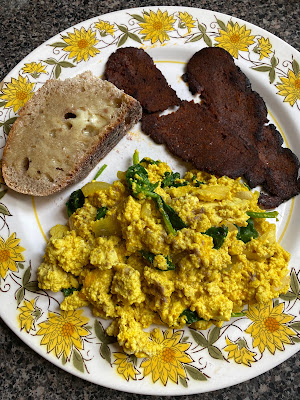 Today for lunch, I had a Mediterranean Quinoa Bowl from Raw Girls. This has black olives and roasted tomatoes, and it's so good! 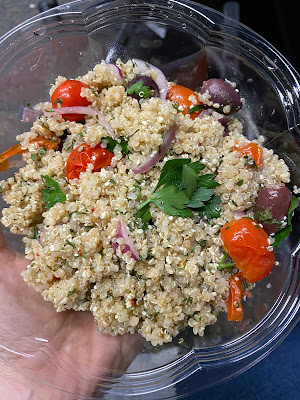 On Saturday, I attended the Memphis Rox Yoga Festival, and Loc'd and Vegan was there. They had BBQ Jackfruit Quinoa Bowls with slaw. This fest was outdoors, and it was chilly and rainy all day, so this was a nice warm lunch. That yoga fest was just so magical!!! Even in the rain! 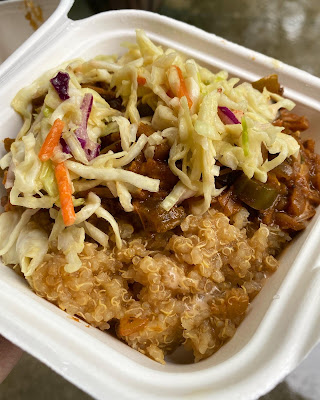