Now that I'm officially obsessed with sourdough, I'm constantly needing to make recipes that use up my sourdough discard (the stuff you pour out every day when you feed your starter). Last week, I made the Sourdough Pizza Crust from The Fiber Fueled Cookbook and then used that crust to make Tuscan Flatbread (also in the book). 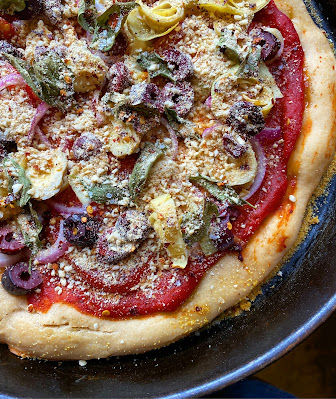 It's topped with artichokes, kalamata olives, tomatoes, red onion, chickpeas, fresh basil, and a homemade cashew parm. This was amazing! We had a friend drop by our house on his way back home to Atlanta as the pie was coming out of the oven, and he ate two pieces (and then asked for a third because he loved it that much).

A while back, Kroger had Wicked Foods products on sale, so I picked up the Shiitake Ramen Broth. The pack just comes with broth and dried veggies, but you have to supply your own noodles and other add-ins. I added Ocean's Halo ramen and some tofu and edamame. The broth was tasty, but it much sweeter than I expected. And I put Bragg's on my tofu as it cooked, so once added to the bowl, this was a little too salty as well. I still ate it all though! But I probably wouldn't buy that broth again. 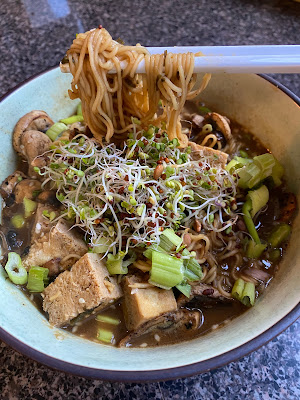 Last week, on my Raw Girls visit, they finally had the Coconut Stir-fry in stock. This is a cooked dish that it's very tasty eaten cold. It has cauliflower rice with squash, zucchini, and cashews in a tasty coconut sauce. 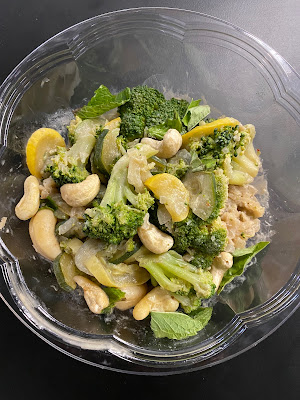 And the Sunday before last was National Ice Cream Day, so I had a Nada Moo Birthday Cake Ice Cream Cone! I didn't realize (until I checked the ingredients) that generic storebought waffle cones were vegan. But all the ones that Kroger had were! 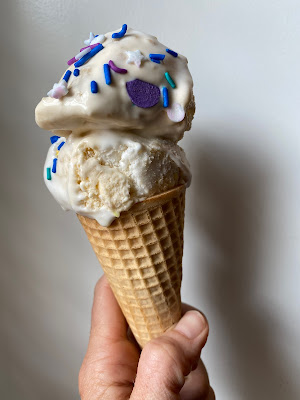 I am so impressed by your sourdough experiments. I have recently gotten into fermenting stuff (thanks to Zero Waste Chef), but I've been hesitant to tackle sourdough baking because it seems a lot trickier. I shall bake vicariously through you. :)

Also, I just acquired a secondhand ice cream maker and am pleased to learn that I unknowingly celebrated National Ice Cream day on Sunday with homemade blueberry ice cream. :)

So I'm curious to know how that pizza crust tastes- is it a lot different than regular crusts? does it have a strong sourdough flavor? it looks delicious!