On days when I actually go into the office (rather than working from home), I like to treat myself to a lunch from Raw Girls since their Downtown location is on my way to the Daily Memphian office. But a couple weeks ago, I stopped in to find them closed for summer break. I hadn't packed a lunch, so I had to figure out some other lunch option Downtown. I know of a few places, but I wanted to try something new, and I wanted it to be relatively healthy.

Enter Bedrock Eats & Sweets. This place has been around for years, but I didn't realize they had a whole vegan menu! They have a lot of options for the paleo/keto crowd, so I just assumed it wouldn't be vegan-friendly. But I was so wrong! They have several vegan dishes, including vegan waffles and breakfast tacos. But since it was lunch, I opted for the Macro Bowl (though breakfast is served all day if that's what you're craving). 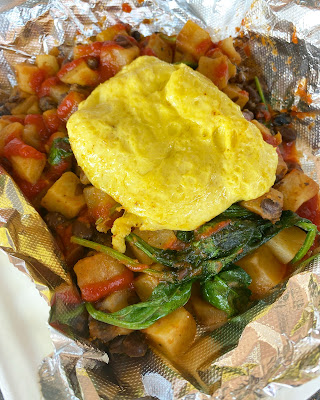 The Macro Bowl had a base of roasted potatoes topped with smoky black beans, spinach, and BBQ sauce. And all of that was topped with Just Egg. This may be the only place in Memphis serving Just Egg, and it's included a lot of dishes. This hit the spot! It was healthy and hearty. And I will absolutely be working Bedrock into my Downtown lunch rotation.

What a lovely surprise!