Home-cooked meals are always my preference, but sometimes, life gets crazy and days will go by with no time to cook anything more than a frozen veggie burger for dinner. When my nights don't allow for cooking, I'm left with few options for work lunches the next day. I can either spend money and eat lunch out (which I already do too often), pack a PB&J, or bring a convenience meal.

And let's face it — most convenience meals (like frozen vegan dinners) have tiny servings that leave me starving a couple hours later. But VegReady, a new vegan meal prepared service is offering whole foods-based meals to go that require no heating, fit in your laptop bag, and won't leave your tummy growling an hour later. They sent me a couple boxes of their meals to review! 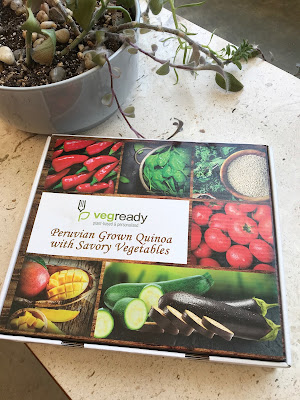 Each meal comes in a box like this. It's wide but flat and fits perfectly in my laptop bag. They require no refrigeration, so there's no need to take up space in the office fridge. In fact, these would be PERFECT for camping since they don't require heating either. 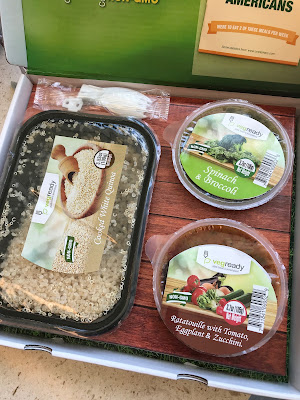 Inside, you get a quinoa tray and two veggie sides. There's even a little plastic spoon if you're truly eating on the go. I do have some feelings about all the plastic and cardboard in the packaging, but it can be recycled.

This meal contained quinoa, a spinach & broccoli cup, and a ratatouille cup (with eggplant, zucchini, and tomato). You just dump the cups on the quinoa and eat! The contents of the cups are more of a puree, which was different than I expected, but I really liked it! The spinach & broccoli cup had some olive oil mixed in, but the ratatouille was oil-free, so it wasn't overly oily. I thought I might still be hungry after I ate this, but I wasn't! I had this at noon at work and it kept me satisfied until dinner time. Because quinoa is magic. 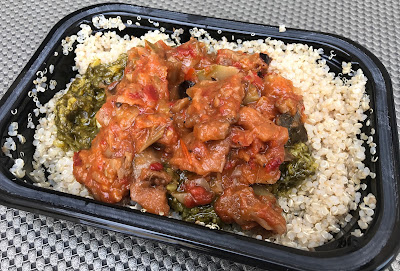 They also sent me another meal with quinoa, spinach & broccoli, and zucchini with white onion. The onion added lots of flavor, and the zucchini, although cooked, was still a little crisp, giving the dish some texture. 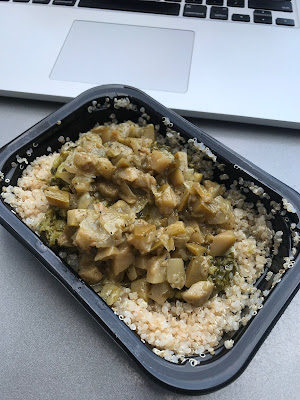 VegReady meals are available by the case. You get 8 quinoa trays and 16 veggie side cups (8 of those are spinach & broccoli because they're intended to eat with every meal – gotta get your greens!) in a case. Right now, they're offering two cases for the price of one on Amazon! Check it out. Perfect for the busy office worker or the camper/picnicker!
Posted by Bianca at 9:00 PM

Oh wow, it's great to know there is a vegan meal service out there! The food sounds great!

I agree that most ready meals are more like ready snacks! So good to see that they have decent serving sizes. And handy that they don't need heating as well. A true ready meal!

It would be magic for food to travel. There's a few of us who eat too much, given the option, These seem better than the frozen "bowls" I stocked up on. The bowls, have not passed the "try it, you'll like it", test. They are never half price, either.

This sounds like a nice compromise for lunches. It looks so yummy!