I finally got a chance to try the Impossible Burger at Next Door American Eatery in Crosstown Concourse (the building where I work). This is the second location in our building to offer the Impossible, and I've had it MANY times at the other place, Farm Burger. Next Door recently added this as a vegan burger option. Previously, they only served a non-vegan beet burger. 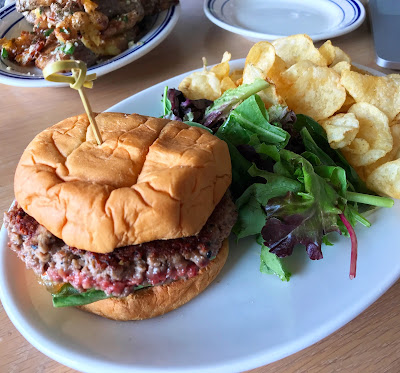 It was good! It has caramelized onions and tomato and comes served with a small salad and chips (upgrade to fries for $2). Normally, it also has a vegan thousand island dressing, but they were out of vegan mayo so I subbed ketchup and mustard instead. I really liked how the patty is served rare and kind of thick. I enjoy the Impossible cooked in all kinds of ways, and it's nice that there's variation in how its prepared in different Memphis restaurants. I think I've now had every Impossible in town!

By the way, if you're curious how I feel about the Impossible/animal testing issue, this article says it all.

On Sunday, Paul and I spent the afternoon playing video games and axe throwing (!!!) at Rec Room/Civil Axe, and we worked up an appetite! We went home and made Spaghetti with Mushrooms. I always cook the pasta and sauce, and Paul makes his famous mushrooms. 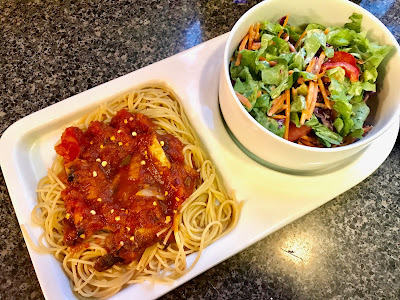 Last night, we had our monthly Memphis Vegan Drinks meet-up at Evelyn & Olive. I haven't been to this little Jamaican restaurant in years! They have a number of vegan options, and they've added a new vegan dish since my last visit — Curried Potatoes & Chickpeas. 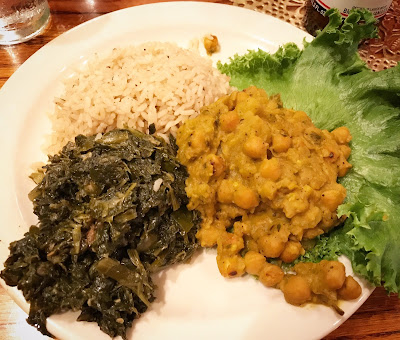 These creamy chickpeas are served with the world's best slow-cooked collards and coconut rice. Yummy! Definitely ordering this again for those amazing greens.

Last night, we had a Crosstown Run Crew meet-up after work (and post-run beers at Crosstown Brewing after that). So I got home pretty late. Thankfully, I had some Amy's Vegan Pizza Rolls in my freezer! This was my first time trying these, and they were SO AMAZING. The insides are stuffed with vegan cheese and marinara, and then I had extra marinara for dipping. 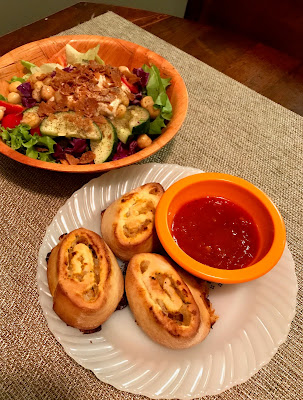 The collard greens look so good. I need to learn how to make slow simmered greens like that!!

OMG you had me at caramelized onions on that burger. They are so good, they should be standard on any burger. The chickpeas/collards and rice looks so amazing as well. I love those pizza rolls! It would be fun to make your own pizza rolls too!

I agree with Sarah, caramelised onions are awesome on burgers! I don't eat raw onion on burgers, but caramelise them and I am there.
Another great food post. I wish we got some of the vegan cheesy Amy's stuff here!

I haven't had an impossible burger yet, but I will try one soon. My grandkids would love the pizza rolls, did you find them in Memphis?