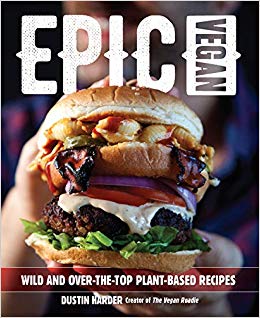 My internet friend Dustin Harder — aka The Vegan Roadie — has a new cookbook, and IT. IS. EPIC. Literally!!

Epic Vegan: Wild & Over-the-Top Vegan Recipes is probably the craziest vegan cookbook I've ever owned. Crazy good, of course. We're talking vegan burgers served on cinnamon roll buns with peanut butter and bacon. Or Disco Pretzel Bites (imagine vegan poutine but with soft pretzels in place of fries, topped with mushroom gravy, vegan mozz, and scallions). This is the stuff my food dreams are made of.

I wanted to make everything, but I tried to limit myself to a couple recipes that shared a common ingredient — Dustin's Cheesiest Cheese Sauce. The cheese recipe made a ton, and I didn't want it to go to waste. So first, I made this Bless Your Heart Bowl. Of course I did! It spoke to my little Southern heart. 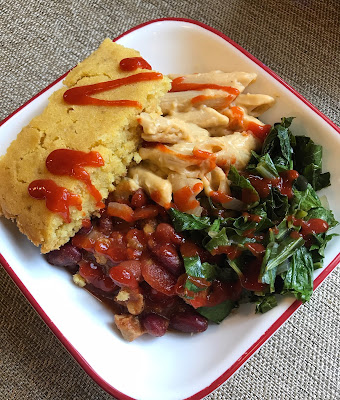 This has a base of chili (Dustin's mom's recipe with vegan beef and kidney beans) topped with Easy Creamy Shells & Cheese (I used penne!), sauteed collards. A perfect meal! The cornbread was sweet and soft like Jiffy, and it reminded me of the cornbread I grew up eating.

One thing about this book: It's not a quick, make-it-in-30-minutes-or-less kind of cookbook. The recipes are more like "food projects," which may not be convenient for everyday cooking. Most recipes call for several other recipes. But thankfully, they make plenty for leftovers, so you can do your prep on a slow night and have food for days.

For example, the Cheesiest Cheese Sauce, which is the base for the mac & cheese, is made with cooked butternut squash and potatoes and blended with all sorts of things, like kraut, tahini, and bell pepper. I made this the night before to save a step. It makes a ton, and it can be used for any recipe that calls for cheese sauce.

The cheese sauce was also called for in these Breakfast Nachos! I made these for dinner last night, and I'm so stoked to have leftovers for the week. 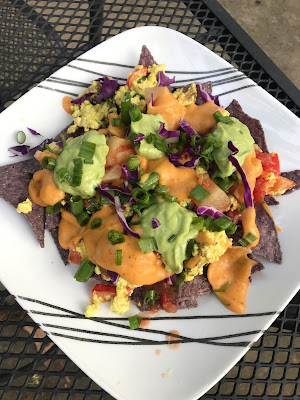 Blue corn tortilla chips are topped with Dustin's Eggscellent Eggs (a tofu scramble made with both crumbled and blended tofu, lending it a very eggy texture — will be making this often!!), the cheese sauce, sauteed vegan sausage and peppers, and a homemade sour cream made with avocados and coconut milk! I love that, other than the sausage and chips, the recipe is based on whole foods, so you can feel pretty great about eating nachos.

Dustin does offer you the option of using store-bought items in place of some of the recipes within recipes, but for full epic effect, I recommend making everything from scratch! 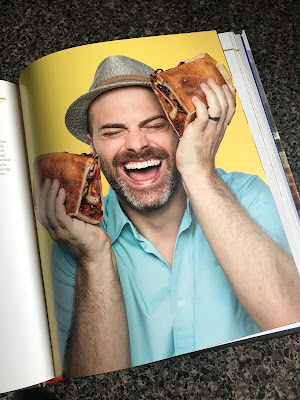 I've bookmarked the Birthday Cake Shake to enjoy on my birthday in October! With its buttercream frosting, cake batter, and ice cream, it's too decadent for everyday eats. But I'm counting down the days until I turn 39 so I can drink that.
Posted by Bianca at 9:00 PM

I love this book! I just did a mini round up on my blog and it is indeed Epic. I can't wait to try more things from it.

Crispy cream donuts?! I hope you make those too & don't spare a detail. This sounds like a really fun cookbook to own.

OMG!!! That photo on the cover, it really is so Epic!!! The dishes sound amazing and so incredibly decadent. I can't wait to see the shake! What a perfect birthday treat!

This sounds like a really fun cookbook! I like those kind of recipes for a fun day off spent in the kitchen!!