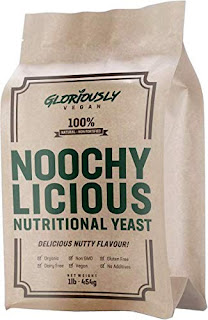 Do you ever hear someone talk about a meal and think, man, I want to make that too? That happened to me last weekend when I was visiting my best friend Sheridan. She and her partner Drew were talking about a quick and easy dinner they'd made — vegan cheeseburger mac hamburger helper!

Sheridan said she'd use my basic nooch sauce from Cookin' Crunk and added some vegan cheddar shreds, vegan beef crumbles, and broccoli for a noochy vegan hamburger helper. When I returned home to Memphis from that visit, that meal was still on my mind. So I grabbed all the stuff to make it on my next grocery trip!

I don't find a big taste variation in one nooch to the next, so I can't say this tastes different than other nooch I've tried. But one thing I did notice is a finer flake. It's almost a powder, which is nice when you're trying to incorporate the nooch into a sauce (and I did in the recipe for vegan hamburger helper).

Okay, now about that recipe. I don't know if my cheeseburger mac used the exact same recipe as Sheridan's, but I bet it's pretty close. For the beef crumbles, I used the new Alpha Foods Original Beefy Crumble, but any vegan beef crumble will work here!

By the way, just note that the picture below doesn't do this yummy recipe justice! It's super creamy and delicious but hard to photograph! 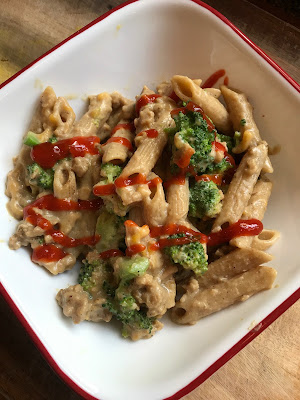 Boil the pasta according to package instructions.

For the nooch sauce, combine nooch, flour, salt, and garlic powder and stir to combine. Add the water and almond milk and whisk until most lumps are gone. Heat over medium heat, stirring often, until the sauce thickens to a gravy-like consistency (about 5-6 minutes). Remove from heat and stir in the margarine and dijon, stirring until margarine is melted.

In a large skillet, heat the coconut oil over medium-high heat until it coats the pan. Add the crumbles and saute for about 5-7 minutes or until thawed and lightly browned. Add the broccoli and saute until it turns bright green and becomes tender.

Add the nooch sauce and burger/broccoli mixture to the drained, cooked pasta and stir to combine. Serve (with sriracha if you want!).

I've never had hamburger helper, but this looks amazing. It's hard to make certain foods look as nice as they taste!!
I remember there was a place I used to buy nooch in bulk, and they had the bigger flakes and also a really fine flake like a powder and I agree, it was easier to work with in some recipes.

I've also never had hamburger helper or really even a desire to try it… until now! That looks so good! I definitely need to add this to my list of recipes to try, it looks delicious!