Farm Burger at Crosstown Concourse in Memphis has added a new handmade vegan burger to their menu! My office at Crosstown Arts is just upstairs from Farm Burger, and I stop in often for their Impossible Burger (the best one in town!). But sometimes a girl needs a veggie-based patty when she's feeling like getting her healthy eating game back on.

Today was one of those days. Paul and I made lunch plans for Farm Burger, but after a weekend of eating lots and lots of decadent, awesome food, I figured a good veggie patty (served atop a salad) would be a better choice than a burger on a bun with fries. 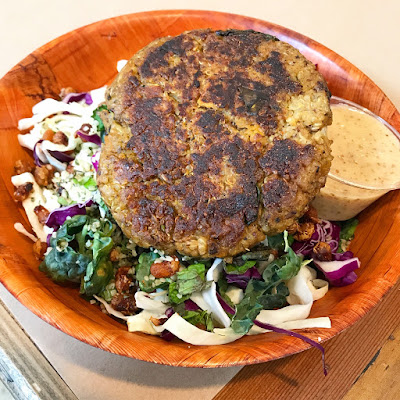 You can get any burger at Farm Burger served on a salad, rather than a bun. And today, I had the new Housemade Vegan Burger on the Superfood Salad (it has kale, cabbage, hemp seed, fried blackeyed peas, and grainy dijon vinaigrette). If you order the new burger on a bun, it comes topped with cucumber salad and lemon-garlic tahini dressing (YUM! I'll have to try it on a bun soon!).

The patty itself is made with quinoa, blackeyed peas, kale, roasted mushrooms, sweet potatoes, and spices, and it tastes amazing! It's firm enough that it holds it's shape (unlike some handmade veggie patties), and it has that char-grilled burger flavor.

The fact that Farm Burger now carries TWO vegan burger options is so cool! When they first opened a couple years ago, there were no vegan burger options there (they had a vegetarian patty that wasn't vegan). Of course I made the need for a vegan burger known every chance I got! And I'm sure other Memphis vegans did to. They heard the demand loud and clear and added Impossible pretty early on. And now they have this great veggie patty option!

By the way, I've been told that Farm Burger (like many smaller chains and locally owned restaurants) is experiencing an Impossible burger shortage thanks to increased demand worldwide. It's pretty cool that Impossible has grown so quickly and that they're expanding into chain fast-food restaurants. But I do hope Impossible works that out soon! Thankfully, Farm Burger has this new vegan burger option!
Posted by Bianca at 9:00 PM

Ooooh that burger on the salad looks like a really delicious meal, especially on a hot day! You get the fun of the burger without a lot of the heaviness. That's amazing that they have two options!

I love a burger on a salad meal! That looks like a great one!
It is really, really amazing that vegan burgers are becoming so popular!!