Typically, when I do a review, I test the product and write a post based on my own experience with whatever I'm trying out. But Kite Hill recently contacted me asking if I'd do a comparison taste test between their vegan almond milk yogurts and other vegan yogurts on the market. It sounded like a fun idea, but I've already professed my love for Kite Hill yogurts on this blog. I didn't think I could offer an unbiased opinion since I've pretty much stated that I think Kite Hill is the best thing to happen to vegan yogurt since Whole Soy.

But I wanted to do the taste test. I just needed some unbiased opinions. So I turned to my mostly omnivorous co-workers at the Memphis Flyer (the alt-newsweekly where I'm a reporter/editor). Kite Hill shipped me a box of their yogurts, and I went to Whole Foods and picked up other vegan brands in the same flavors as the Kite Hill yogurts.

Then I set them all out on a counter at work with little scoring sheets. Each person who tried the yogurts was instructed to write their names under their favorite of each flavor (with any notes they wished to add). 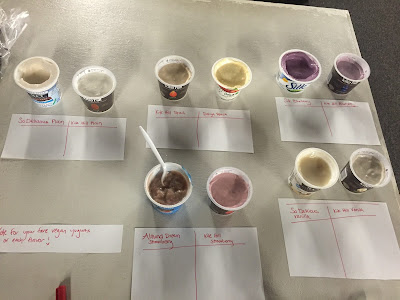 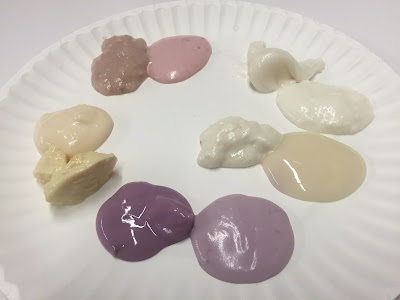 First up, we had So Delicious Cultured Coconut Milk Vanilla versus Kite Hill Almond Milk Yogurt Vanilla. Out of eight testers, six chose the Kite Hill over So Delicious. Comments in favor of Kite Hill included notes about its superior texture. One tester who voted for So Delicious said she preferred the coconut milk yogurt because it had less of a nutty flavor. 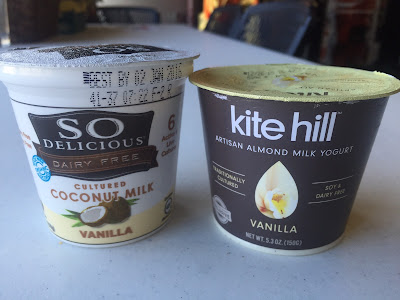 As for me, I love both of these! But I think Kite Hill has a more authentic yogurt texture. The So Delicious yogurt has more of a pudding-like feel. Here's an inside shot of both. 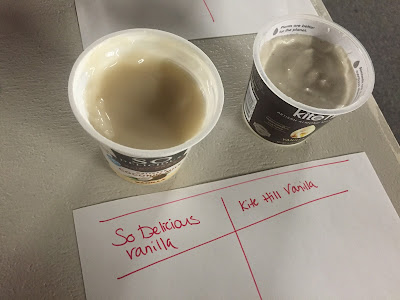 Next up was Kite Hill Almond Milk Yogurt Peach versus Daiya Peach Dairy & Soy Free Greek Yogurt. Six testers tried both of these, and ALL SIX voted for Kite Hill. The texture seemed to be the deciding factor here. The Daiya yogurt has a very thick texture, and even though it's supposed to be like Greek yogurt, our omnivore testers said it was too clumpy and thick for even a Greek style. 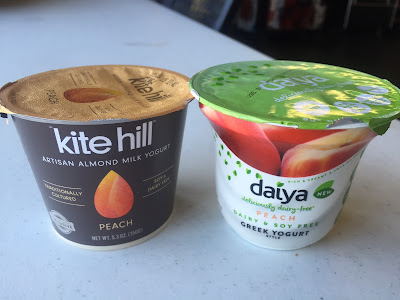 One tester voted the Kite Hill Peach as her favorite overall of all the yogurts. She said it had the best flavor and was most like dairy yogurt. She also appreciated the bits of real peach inside the yogurt. Here's an inside shot of both. 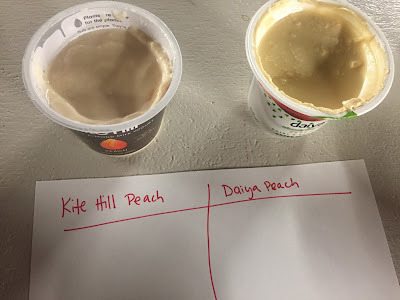 We pitted Almond Dream Strawberry Non-Dairy Yogurt against Kite Hill Almond Milk Yogurt Strawberry. There were seven testers for this one, and six chose the Kite Hill as the winner. The seventh tester actually said she didn't like either one, stating that the almond flavor in both was too prevalent (clearly, someone doesn't like almonds!). 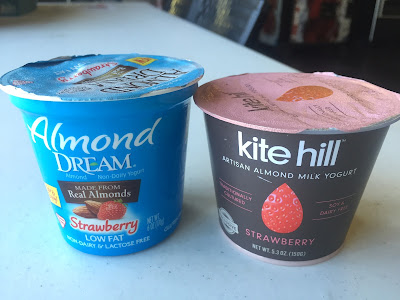 All those who chose the Kite Hill Strawberry said it won by a landslide. Many were turned off by Almond Dream's chunky texture, and one tester even said Almond Dream "tasted like chemicals." For the record, the ingredient list for Almond Dream shows only natural ingredients. Another tester said Kite Hill would have won on appearance alone even if he hadn't tasted them both. Here's an inside shot, and as you can see, the Almond Dream doesn't look all that appealing. 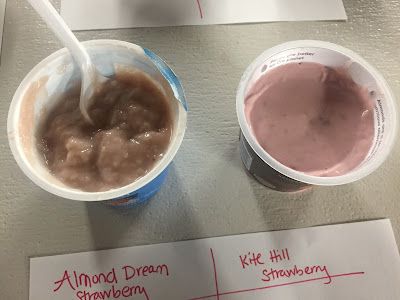 Silk Dairy-Free Yogurt Alternative Blueberry went up against Kite Hill Almond Milk Yogurt Blueberry. This was a tough call for some of our testers. One chose Silk over Kite Hill, citing a better color, flavor, and texture. Another tester called it a tie, and one said she preferred the consistency of Silk, which was more like dairy yogurt, but she said it was too sweet. Three of the eight testers on this one said Kite Hill was the definite winner. 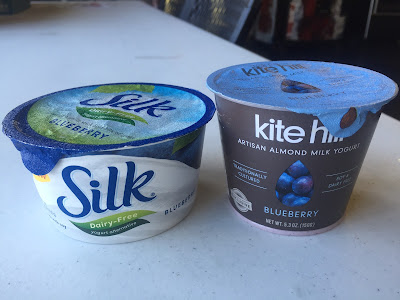 As for me, I felt like Kite Hill was better for two reasons — it wasn't as sweet and had slightly more yogurt-y tang. But both are great! Close call. Here's an inside shot. 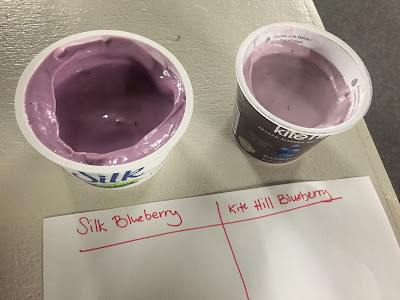 Finally, So Delicious Greek Style Plain Cultured Coconut Milk went up against Kite Hill Almond Milk Yogurt Plain. Kite Hill won across the board with four testers, and one other tester said she didn't like either one. 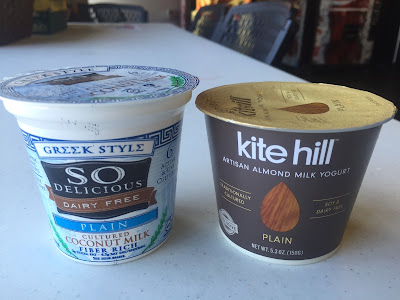 Some testers who tried other yogurts were too intimidated to try these plain yogurts at all because they weren't as sweet, and those who did said the Kite Hill was better because it had just a tad more sweetness than the So Delicious. But I'll tell you that if I were using these in a savory application, like a tzatziki sauce, I'd pick the So Delicious. The lack of sweetness would be appealing for that. But if I were to eat these with granola and agave for breakfast, I'd pick the Kite Hill. 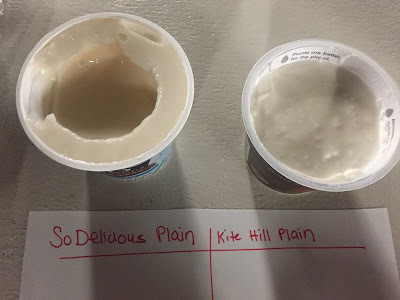 Kite Hill was the winner in every taste test, but I'd say So Delicious and Silk were close calls. Personally, I really do think Kite Hill is the best yogurt on the market right now, but several other vegan yogurts are delicious too. Almond Dream definitely needs to step up its game, especially since a far superior almond milk yogurt is available now with Kite Hill.
Posted by Bianca at 7:42 PM

Wow, I haven't seen kite hill yogurts around but I'd like to try em. I miss WholeSoy!! I enjoy the Silk yogurt and the SoDelicious coconut yogurt but the texture is a little runny with the coconut yogurt and yea, the Silk is a little sweet. mostly I don't eat vegan yogurts much anymore at all but I'd like to try the KH brand now.
And yea, the Almond milk one is blech. Too bad.

Dang. My Whole Foods doesn't have that much variety! I definitely need to keep an eye out for Kite Hill. I really love vegan yogurt I think probably because I went a good 5 or 6 years without any yogurt not realizing vegan yogurt existed. Loved this review!! Super helpful for my own future shopping!

I've never found an American non-dairy yoghurt that I've liked so I'll definitely be trying Kite Hill next time I'm over there. I think us Europeans are a little spoilt with all of the Alpo / Provamel / Sojade / Sojasun / Joya we have over here!!

I like Kite Hill yogurt, I still really prefer soy yogurt. Silk is indeed sweet, but I like the taste and texture (and protein!) of soy yogurt. Why won't anyone make soy yogurt. Why does everyone over in europe get to eat soy yogurt all day long? why?????

I agree Amy! When I was on holiday in the US, the complete lack of soya yoghurt baffled me! And I must admit the vegan yoghurts that I tried were seriously unimpressive. I wonder how kite hill would do pitted against the alpro cremoso range cos that stuff is the best vegan yoghurt I've ever tasted.

I agree, I fell in love with kite hill yogurt the first time i tried it. I also LOVE their cream cheese. This was a fun post, I always like to see what non vegans think of vegan food!

I recently went on my own yogurt kick since I had a bad stomach bug and was trying to as much fermented foods as possible. I think kite hill was the best and most yogurt-y. I really dug Nancy's Organic Yogurt, but it was very yogurt-y. It kind-of was it's own cool snack.

Amey and lakkalkka, if you are wondering why American doesn't have many soy yogurts, there is a fairly big fear of soy with some health conscious people in the USA. The problems are that in the US most soy beans are GMOs. The other reason why people are afraid soy beans is because of phytoestrogens, making people THINK that it messes with your hormones. I think it is silly since soy is just a bean, and some foods have more phytoestrogens in them. It isn't just a vegan fear, I think it effects more omnivores than vegans.

What a fun taste test! That is a great idea to bring it in to work and do it there for unbiased opinions! I finally got to try the Kite Hill Cream Cheese and I'm in love with it. I also tried the Kite Hill Strawberry yogurt and while the texture is amazing I found it to be so overwhelmingly sweet! I don't know if I'm the only one but I couldn't even eat the whole thing because it was so sweet. Is the vanilla flavor less sweet? I would love to be able to eat yogurt again but I couldn't get past how sweet it was!

Kitehill Almond yogurts taste had real unclean taste. Not sure how people it. it is too tart and gel like texture. It does have some off taste

You said in your closing paragraph that "Kite Hill was the winner in every taste test", but how can this be true when Kite Hill's Blueberry flavor was preferred by only 3 of 8 tasters?