The Vegan Egg Is Here!

Y'ALL!!!!!!! The most exciting vegan invention ever is here! I finally got my hands on the new Follow Your Heart Vegan Egg, and it totally rocked my little world.

Giving up eggs was the hardest part of going vegan 11 years ago, and I still miss them. Tofu scrambles are amazing, but they're not quite like scrambled eggs. And resourceful vegans have found ways to use tofu to make deviled eggs, omelets, and fried eggs or chickpea juice to make meringue. A number of vegan products have done a great job mimicking egg yolk for French toast or Hollandaise (The Vegg!) or mimicking eggs in baking (Ener-G egg replacer, Bob's Red Mill Egg Replacer). But until now, no vegan product has been able to come close to the taste and texture of scrambled eggs. But the Vegan Egg does just that. 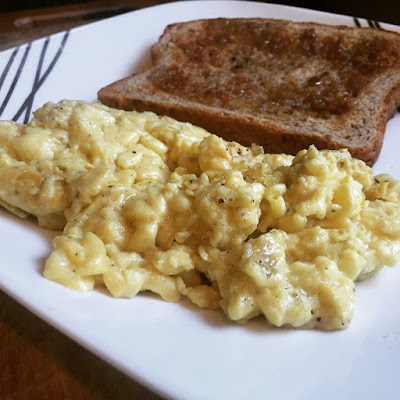 I ordered a carton of Vegan Egg from Rabbit Food Grocery a few weeks back, after it first came out. It was on back-order because vegans have basically broken the internet with all their Vegan Egg orders. And then Follow Your Heart said they'd send me some samples. My Rabbit Food order actually got here first over the weekend, and the samples arrived yesterday. So guess what I had for breakfast Monday morning? 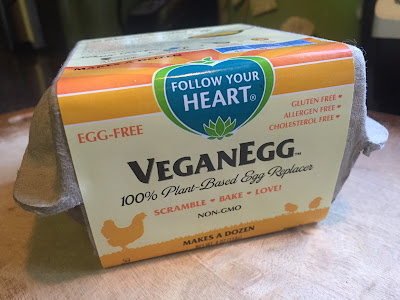 I can't even tell you how much the Vegan Egg resembles the mouthfeel of soft, slightly runny eggs. It's almost eerie. They use algal flour and algal protein to mimic the egg taste and texture. Whole algal is produced from a microalgae found in the Netherlands, and it's high in healthy lipids, carbs, and micronutrients. It does contain a little carrageenan, and I know some folks are weirded out about that. But I've never had an adverse reaction to it, and I'm not really super-worried about little things like that. So whatever.

As for the taste, the Vegan Egg is a little bland on it's own, but it's meant to be used for both scrambling and baking, so they went easy on the nooch and black salt. Probably wise. I added extra black salt to mine after cooking, plus a lot of black pepper because that's how I always made scrambled eggs. It really tasted like eggs!

So here's how it works. Inside the cute egg carton, there's a plastic bag filled with powder. Sorry, no vegan egg shells yet. 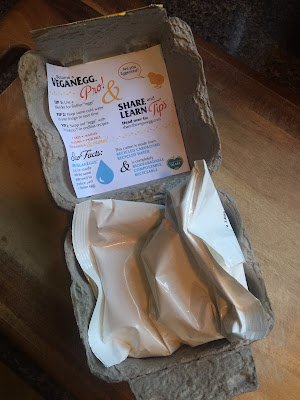 Two tablespoons of the powder mixed with 1/2 cup of water equals one egg. You can whisk the powder and water in a bowl, but a blender will make for much fluffier eggs. I whipped mine up in the Vitamix. Also, the amount for one egg cooks up to be a pretty small serving, just like if you were to scramble only one chicken egg. For a decent-sized serving, I recommend four tablespoons of powder and one cup of water.

Next, you heat a pan that's been sprayed with cooking spray. Once it's hot, pour in the Vegan Egg mixture, and it immediately starts to cook up. I had so much fun stirring and scrambling this. Just like old times. 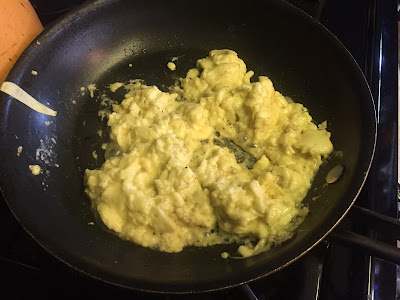 And that's it! It's great with toast since the eggs stay just a tad soft. You can also use these for baking, making onion rings, dipping French toast, and probably a bunch of other uses. But each box only has 12 eggs, and if I double them every time, that's six servings. So I'll probably hoard it all for scrambled eggs. At least until the newness wears off.

For now, you can order the Vegan Egg from Rabbit Food in Austin, Vegan Essentials, Amazon, and a handful of other stores. And a few vegan specialty markets carry it on their shelves, but there are none near where I live. I'll be ordering this as often as possible. For now though, most online shops are out of stock because the initial rush wiped out what was available. Vegans are really excited about cruelty-free eggs!
Posted by Bianca at 10:35 PM

Those look so much like real scrambled eggs! I can't wait to try these!!!!

I am looking forward to trying this and recommending to family that "can't" give up eggs! Thanks!

My husband (a reluctant vegan) is obsessed. He makes homemade biscuits, and piles on the fried vegan egg (fried in magic vegan bacon grease) with Sweet Earth's benevolent bacon. SO FREAKIN' GOOD

They look so real! I'm so curious to try this! I definitely have to hunt it down, it's so amazing what companies have come up with over the past few years!

Just stumbled upon your blog while trying to make sure my chocolate bare coconut chips were vegan. My name is Bianca also. I am a new vegan, 2 months egg and dairy free and 2 weeks meat free. These eggs look yummy!

I really really hope this comes to Philadelphia soon! And lol-- I totally understand doubling up the usage! This looks soooooo good! <3