No, these are not pot brownies, so don't get too excited. But they're close! Cannabidiol, more often abbreviated as CBD, is one of the many compounds found in the cannabis plant. But unlike the more commonly known THC, which has psychoactive effects, CBD is hemp-derived and non-psychoactive.

Auntie Dolores is a maker of medical marijuana edibles in San Francisco, where medical pot is totally legal. But they also bake CBD products that are legal to sell all over, even in states that don't allow medical marijuana (like Tennessee, where I live). While it won't get you high, CBD does have some great medical benefits — combats inflammation, anxiety, nausea, tumor cells, seizures, and psychosis.

Aunt Delores mailed me one of their vegan CBD Chocolate Brownie Bites to review. So I put it to the test. 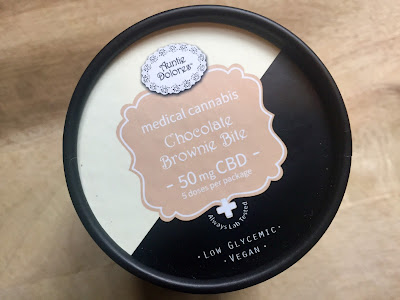 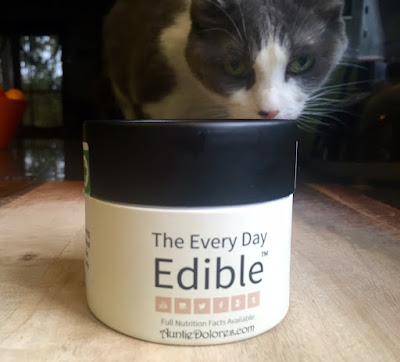 Inside, there was a tiny bite-sized brownie. The package said this brownie contained five 10 mg doses of CBD. These sell for $14 each on Auntie Dolores' website. 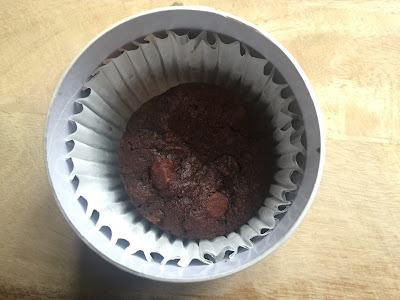 I do suffer from chronic inflammation with my never-ending case of runners knee, so I ate half the brownie before going to a Memphis Grizzlies game last week because I knew I'd be going up and down stairs to my seat a lot. And my knee tends to hurt the most when going upstairs. 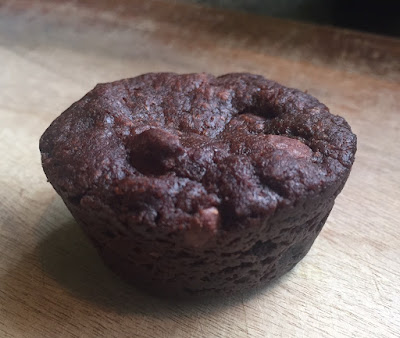 So did it work? A little! I could still feel pain when directly pressing onto my inflamed knee. But there wasn't much pain going up or down the stairs. I also felt a sort of peaceful calm wash over me. I don't suffer from anxiety, but I could see how these would be very helpful to someone who does. As for the taste, this was delicious — chockful of mini chocolate chips — but it was a tad dry. I'm not sure how long it stays fresh after being baked, but I'm sure it was at least a couple days old because of shipping.

I think it's super-cool that a medical marijuana dispensary is offering alternative products for people in states that don't have medical pot access. And it's even cooler than they're making these products vegan. They even sell vegan CBD dog treats with pumpkin and peanut butter! I wish I could try those on my super-anxious Maynard, who is prescribed Prozac. Several of their THC products are vegan, too, if you're a registered medical cannabis patient in California. ;-)
Posted by Bianca at 9:19 PM

Wow, looking yummy, will surely try it,thanks for sharing :) do visit my blog too for more yummy recipes

Hm, these look interesting! I wouldn't actually use the psychoactive cannabis products, but this had me curious since it's not! I have an autoimmune disorder that causes a lot of pain and inflammation and I'm also anxious a lot. Might be cool to try when I can afford them.