On Saturday, my cousins, aunts, and uncles all gathered at my Me-Maw's house for a little holiday social. We didn't do presents, just food and conversation. It's been a couple years since my Me-Maw has been able to hold a family Christmas party because last year at this time, she was recovering from hip surgery.

Okay, she's actually recovering from another hip surgery — the other side — now, but she's bounced back from this one much faster. Here's me and Me-Maw — my mama's mom. And please note that I'm wearing a tee-shirt in the middle of December because it's in the 70s here right now! 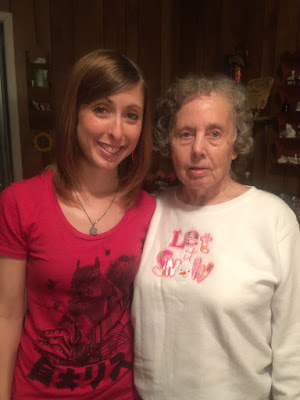 My mama planned all the food. Here's a selfie of my mama and me! Or is that an ussie? 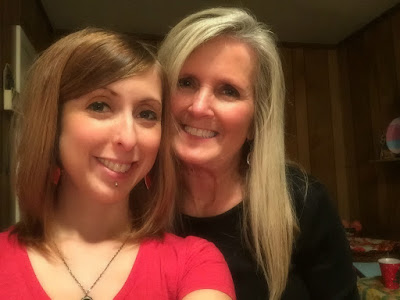 She wanted to do a build-your-own sandwich bar, so she picked up some meats and cheeses and made some dips for chips. She picked me up some Tofurky Hickory Smoked deli slices, and I brought some Field Roast Chao cheese from home. When she realized the croissants she was buying for everyone's sandwiches weren't vegan, she actually made me some homemade rosemary focaccia bread! 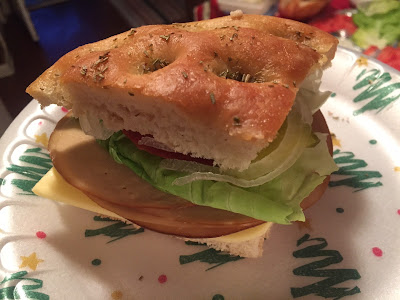 It was so good! All light and fluffy and herbed. Here's another shot of my sandwich with vegan deli slices, vegan cheese, tomato, lettuce, onion, pickle, and some sriracha-horseadish vegan mayo (that my mom also made). 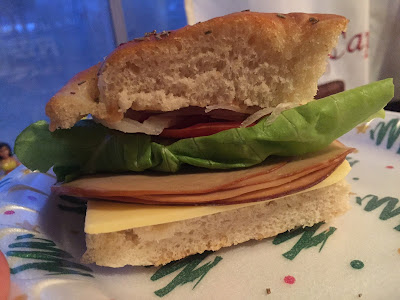 Mama made cheese dip for everyone else, so she whipped me up some Vegan Rotel with little bits of vegan burger crumble and Daiya. Perfect for Fritos Scoops, of which I had many. Too many. 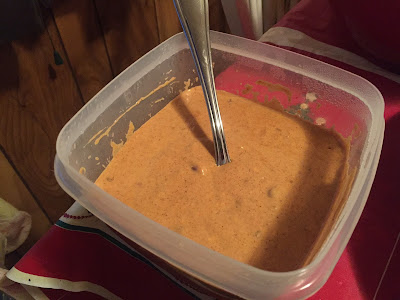 And if that wasn't enough homemade vegan awesomeness, mama also made me a Vegan Cheese Ball!!! She had made a dairy cheese ball for the rest of the family, and she didn't want me to feel left out. Yea, I totally have the best mama ever. This ball was made with vegan cream cheese and vegan cheddar, and it was just as good as any dairy cheese ball I've ever had. I've got to get her recipe! 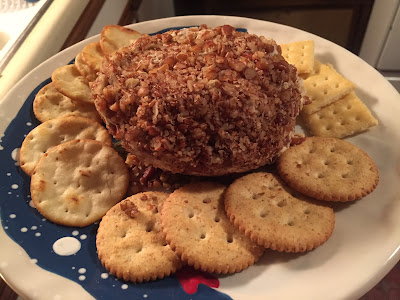 She made a couple kinds of cookies, one of which was vegan. These Mexican Wedding Cookies are one of my all-time favorite cookies. They're crumbly in all the right ways and rolled in powdered sugar. 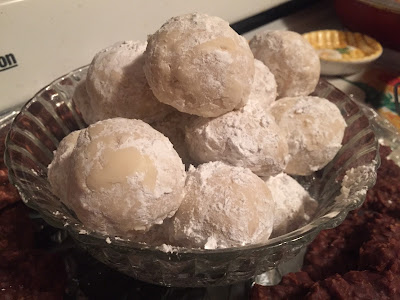 About a week before the get-together, my cousin Sarah requested that I bring some cupcakes to the party. So I threw together some simple Chocolate Candy Cane Cupcakes using the chocolate cake recipe from Vegan Cupcakes Take Over the World (that's a NEVER FAIL chocolate cake recipe, btw) and adding peppermint extract to the basic buttercream recipe from that book. I sprinkled some TruJoy organic candy canes over the top. 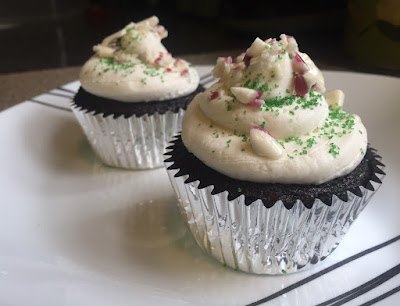 That's it! We had a good time. And my very non-vegan family members were impressed (and in some cases, totally fooled) by all the vegan things they tried. Some people were eating my vegan cheese ball instead of the non-vegan one without even realizing they were eating a vegan one! And my uncle Dale requested that I make a vegan lasagna for him to try sometime. Spreading the vegan message, one family member at a time.
Posted by Bianca at 10:49 PM

What a feast! Your mother is such a sweetheart! :)

What a great mom! That's so cool that family got into some great vegan food! I'm convinced taste buds are the way to make the world vegan, and vegan food just keeps getting tastier! Great post!

Your mum is so awesome to make sure there are lots of vegan options for you. :)