Nothing beats an easy-to-assemble, super-healthy, vegan comfort food dish. Am I right? That's, like, all the qualifications for an awesome cooking and eating experience. And that's what's on offer in Kathy Hester's new book, The Easy Vegan Cookbook. 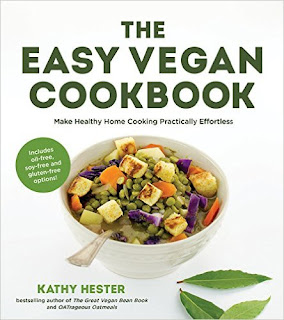 The full-color, paperback cookbook features a beautifully styled food photo for every dish. And Kathy's recipes are so creative! She takes a typical comfort food dish, say veggie pot pie, and then, she mixes it up and creates something you'd totally never have thought of (like veggie "potpie" pasta — all the filling of a pot pie mixed with whole-wheat pasta shells instead of packed into crust). To top it off, the recipes are simple. And most are low-oil or oil-free.

I'm a comfort food fanatic, and pretty much everything in the book sounded like something I needed to try right away. But I finally settled on the Drunken Sweet Potato BBQ because drunken and BBQ. 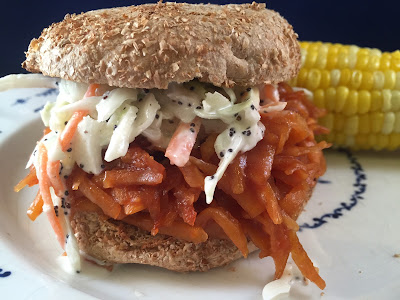 Kathy uses shredded sweet potato in place of pulled pork, and it looks almost just like meaty 'cue! The recipe is called "drunken" because the sauce is made with both hard cider and bourbon, both of which give it a sweet twang. It was a really unique spin on BBQ sauce that I'd definitely make again and again. I topped my sandwich with some quick poppyseed coleslaw (cabbage, poppyseeds, Just Mayo) and served it with corn on the cob.

I also tried Kathy's Pumpkin Hummus from the book. My office had a cookout last month, and I brought a double-batch of this hummus to share. 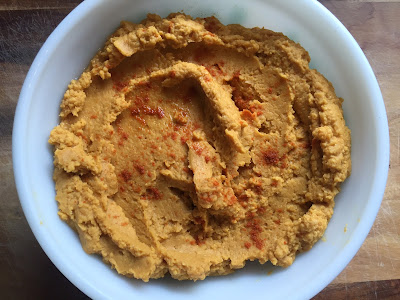 This is an oil-free hummus, y'all! And honestly, if I'd realized that before starting on making the recipe, I probably wouldn't have made it because there's a rule about sharing vegan food with omnis, and that's to not make it super-healthy. You're supposed to save you're no-oil/chia/flax/spirulina/noochy vegan power food for your own advanced vegan self and serve them the decadent stuff. We're trying to make converts here. But as I was adding the can of pumpkin to the food processor, I noticed that there's no oil and no tahini. Just chickpeas, pumpkin, and spices, like smoked paprika and coriander.

I figured I'd try it the way the recipe suggested, and I could always add oil at the end if it needed it. And you know what? It totally didn't even need the oil! The hummus was so moist (from the pumpkin) and well-spiced that it was perfect just like this. I brought it to work, along with some Pretzel Crisps and baby carrots, and everyone loved it!

That looks like a great cookbook! The sweet potato BBQ sandwich looks amazing! I agree with you about saving the healthy vegan stuff for the vegans. We gotta hit the non vegans with the super good stuff so they can't resist! I'm glad the hummus was a hit!

That hummus looks great. I don't like adding oil to my hummus and it ends up too thick. Shame on me right? But I should try the pumpkin. Sounds like a tasty mix- chickpeas and pumpkin.

This sounds like a good book. I am looking for some new ones to add to my Christmas list.