Remember Fruit Roll-Ups? Those were the best! They still make them, but I haven't seen (or tasted) one in years. I just googled the ingredients, and it looks like they're vegan. But they appear to have just as much (or more) corn syrup as they do real fruit. I probably wouldn't feel good about eating that as an adult, but when I was a kid, I'm pretty sure corn syrup was a big chunk of my diet. And I totally didn't even care.

I've seen recipes for homemade raw vegan fruit roll-ups, and while I do have a dehydrator, I've never tried making my own. But this small vegan company called Perky Fruit Bodies makes organic, raw, kosher fruit roll-ups with all-natural ingredients and superfoods, and they sent me some samples to review. 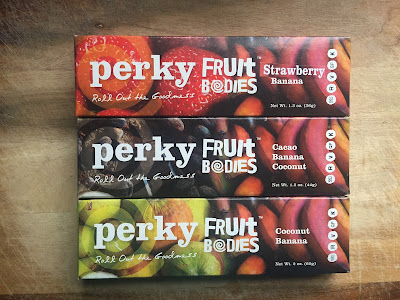 There's Strawberry Banana, Cacao Banana Coconut, and Coconut Banana. They look similar to the fruit roll-ups of my childhood but minus the artificial color. 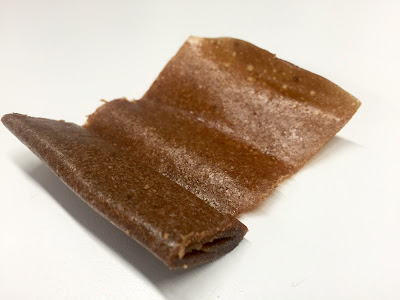 But they taste much better than those artificially flavored fruit roll-ups! The Strawberry Banana roll-up is my fave. It's made with fresh, organic strawberries, sun-dried red banana powder, sun-dried cane juice crystals, and alkaline water. The strawberry taste is very prevalent and isn't overpowered by the banana. It's chewy and only slightly sweet. It does tend to stick to your teeth a little though. I was picking out dried fruit for a few minutes after eating a roll.

My next fave was the Cacao Banana Coconut. It's made with the same sun-dried banana powder but also organic shredded coconut and organic raw cacao powder. The chocolate taste shines through and leaves a rich flavor in your mouth long after its gone.

The Coconut Banana was great too, but after trying the Cacao Banana Coconut, it just didn't live up. Because when you can add cacao to something, you should!

These Perky Fruit Bodies snacks have been excellent pre-run fuel over the past few weeks. They're 130 calories per roll, which is just about what I like to have before a morning run. And since they're made with pure fruit and all-natural sweetener, they break down easy in the body for workout energy.
Posted by Bianca at 8:41 PM

Those sound great! I haven't had a fruit roll up in like one million years!