Stuff I Ate in December!

I've been trying to wrap up my vegan product reviews over the last couple weeks, so I've neglected to do any random "stuff I ate" photo dumps. Beginning January 4th, I'll be embarking on the 28-day Abundance Diet from Somer McCowan's cookbook. So with my reviews caught up, it's time for a photo dump. Here's everything I've eaten in December that I haven't already shown you in another blog post.

Inspired by the so-not-vegan Turducken (I think that's a duck stuffed into a turkey or something), my friend Cassi of Pink Diva Cupcakery created vegan Piecaken to sell in her shop. This was a mini cherry pie stuffed inside a chocolate cupcake. YES! She used a vegan whipped topping since the pie-cake was a little on the heavy side. 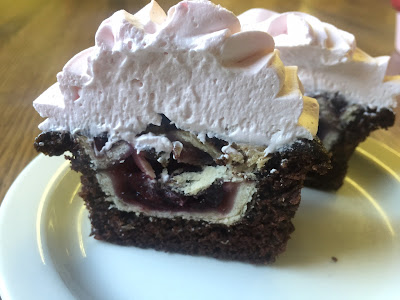 She's started a new women's-only event at Pink Diva called Cupcakes, Cocktails, & Cursing. It's basically a bitch sesh with cupcakes and wine. I went to the first event, and she had these Mini Champagne Cupcakes. 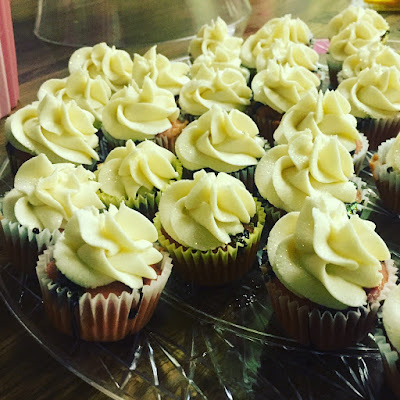 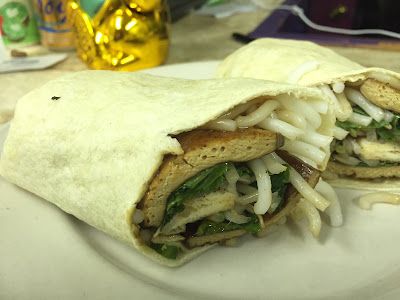 Other meals I've eaten at Pink Diva lately have included the Veggie Pasta, which is loaded with tempeh, kale, carrots, zucchini, and mushrooms. 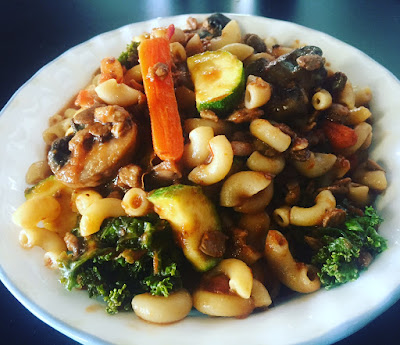 And BBQ Tofu plate with Vegan Mac & Cheese and Avocado-Kale Salad. She uses an awesome mustard-based BBQ sauce for the fried tofu, and it's just the bee's knees. 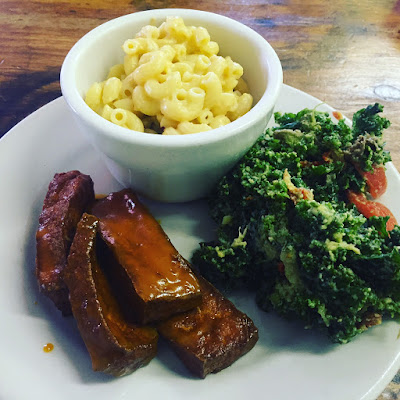 I also got this yummy brunch plate for lunch one day. She only serves brunch on Saturdays, but I made a special request and got it on a Thursday. Pancakes, Vegan Sausage, & Hash Browns. 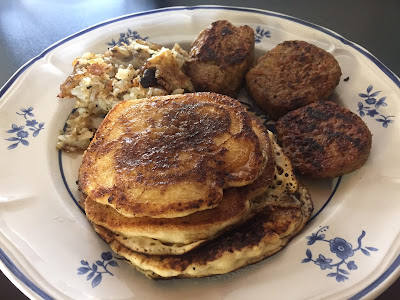 While we're on the topic of vegan restaurant meals, here are some I had at my home away from home Imagine Vegan Cafe. This Vegan Steak Quesadilla is one of my favorite meals on the menu! It's loaded with Gardein beefless tips, vegan cheese, and sauteed peppers and onions. 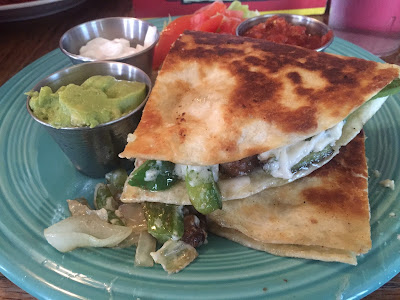 I'm trying to eat as much fried food as possible before my cleanse, and this Fried Eggplant Parm dish from Imagine hit the spot. Slices of fried eggplant are topped with marinara and a house-made vegan white cheese sauce. Served with the BEST GARLIC BREAD EVER (because they basically soak it in Earth Balance). 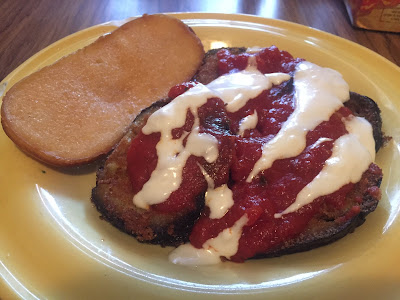 I wish you could see inside this Breakfast Burrito from Imagine cause it was stuffed with goodness — tofu scram, vegan sausage, vegan cheese, salsa, and guac for topping. I had two hash brown patties on the side because two hash browns are better than one. 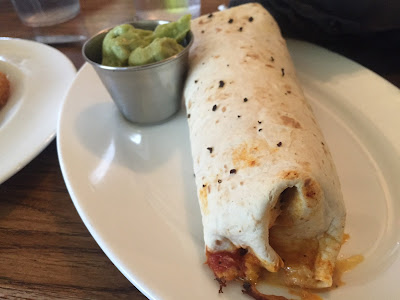 This is a crappy photo of the Reuben from Imagine, but trust me — it was delicious. Thinly sliced vegan salami with lots of kraut and homemade Thousand Island dressing. I had mac & cheese on the side. 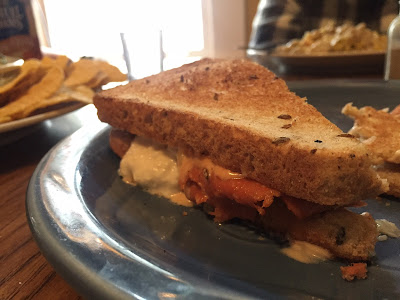 Speaking of mac & cheese, I recently spruced up some So Delicious boxed Pizza Mac by adding Match Meat Italian Sausage. Tasted like pizza and mac & cheese at the same time. MAGIC! 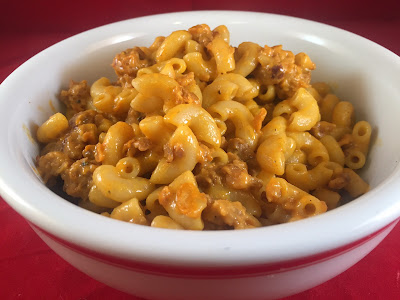 Mmmmm ... these So Delicious Peppermint Star ice cream bars are so creamy and pepperminty. Tastes like the holidays!! 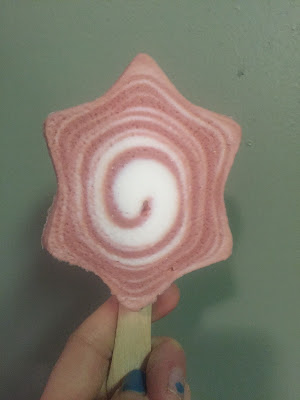 On Tuesday, we had our monthly Vegan Drinks meetup at Pyro's Fire Fresh Pizza, a build-your-own pizza place with vegan options. They use Follow Your Heart vegan cheese and place it on the pizza in cubes. It's different, but I like it! Reminds me of those margarita pizzas with the blobs of mozzarella. My pie had a base of BBQ sauce, and I added vegan cheese, roasted mushrooms, roasted broccoli, caramelized onions, black olives, banana peppers, roasted bell peppers, and roasted garlic. 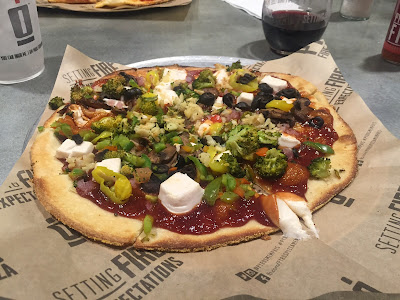 I've shown this sandwich on the blog a number of times, but I had one again, so here's another. It's the Bianca Banh Mi (yes, named after yours truly!) from Midtown Crossing Grill. It's a tofu banh mi with hummus, and it's DELICIOUS!!! Definitely proud to have my name on it. Had a salad with wasabi vinaigrette on the side. 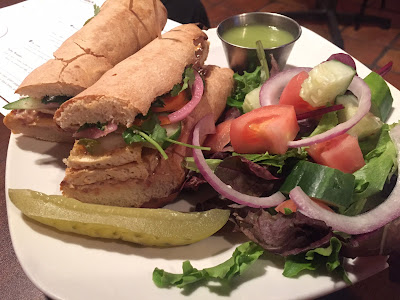 Looking at these pics, I'm thinking I definitely need a cleanse! Ha! But I swear December wasn't all pizza and sandwiches and cupcakes. I did have this super-healthy Mung Bean Pasta with Butternut Squash, Pom Seeds, Sage Pesto from the Raw Girls vegan food truck! 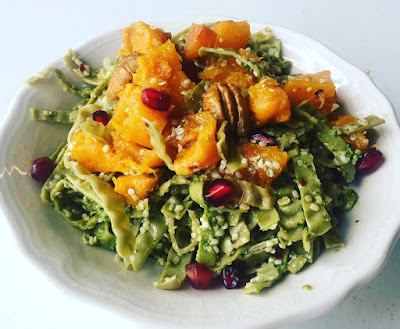 So much yummy food!

Yum! Everything looks so amazing! A pie in a cake?! Count me in!

I always love your "stuff I ate" posts -- so much deliciousness!!! The food from Imagine cafe all looks amazing. I hope I can eat there one day. We don't have anywhere in Santa Cruz that will make vegan pancakes, and it's a bit of a sore spot for me. What the heck!?

I can't wait to see your food from Somer's 28 Day Abundance Diet. Everything I've made from that book has been SO good - though, admittedly, I haven't tried any of the smoothies yet. I've thought about doing her structured plan, but haven't committed to it yet. So I'll be following your experience with interest!

Phorito?!?! I didn't know people are starting to burrito-ize all these non-burrito foods. I've been doing that with my leftovers for forever. Maybe I should open post my dalrito- dal, rice, and daiya burrito. That seems to be what I am always eating for lunch anymore. lol

There's a sandwich named after you?!?!! Whoah. And what a good looking one too!
Pink diva has some great creative dishes there, but i'm also eyeing those vegan pancakes.
Ttrockwood