Last year, my friend Leslie decided that we should start an annual pumpkin potluck tradition. No rules on when exactly the potluck had to be held, just sometime in the late fall. And everyone must bring a pumpkin dish —sweet or savory. Our first event last year was at Leslie's old place, but she's since moved off to the 'burbs, which is simply unsuitable for hosting a party for mostly Midtowners.

So I volunteered my house this year! We had a pumpkin-y good time. Of course, Leslie went with an Indian-themed dish (her specialty) of Pumpkin Samosas with Cranberry Chutney and Tamarind Sauce. These were stuffed with pumpkin puree, pepitas, and cranberries, but they were savory and delicious. 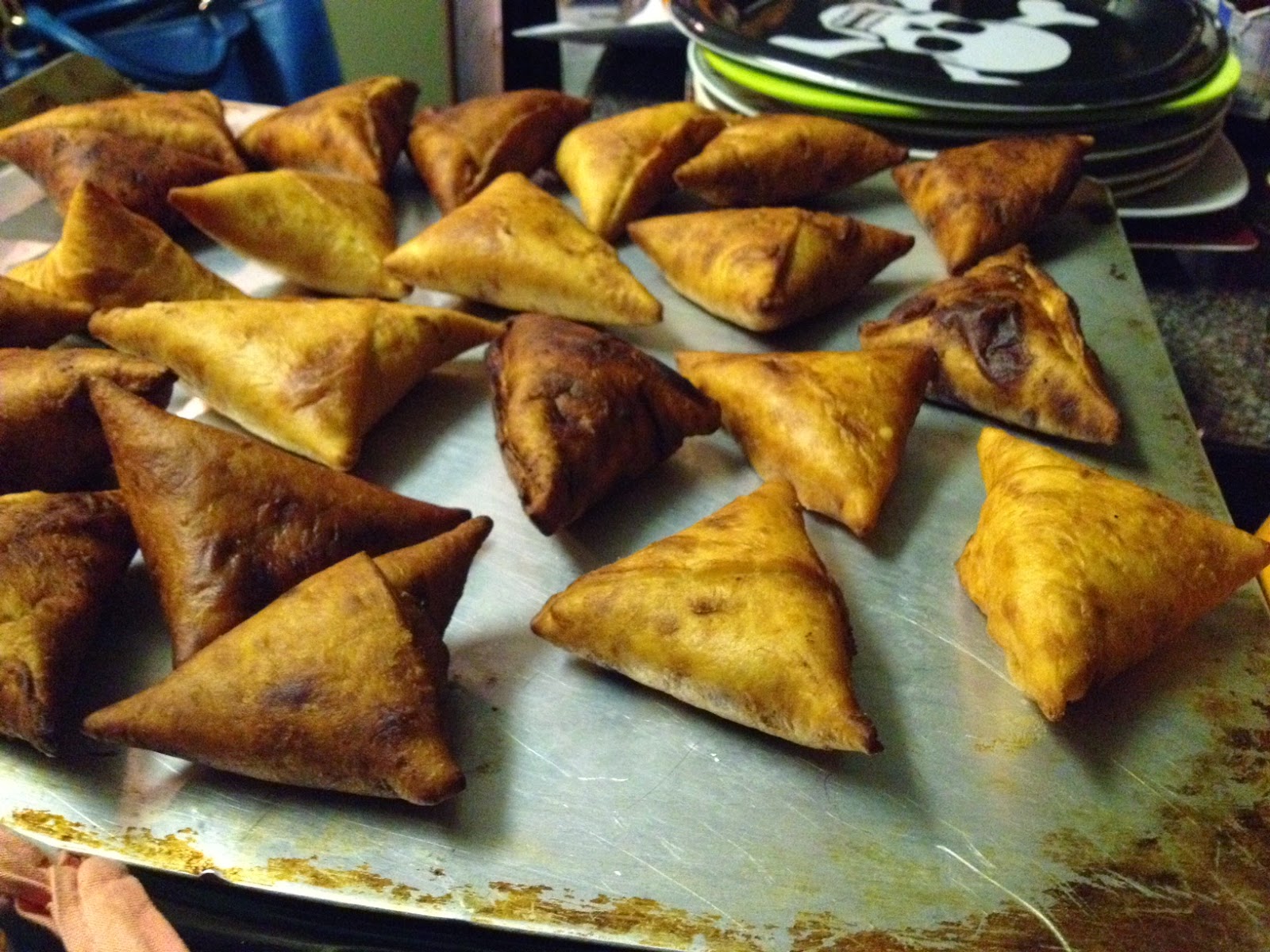 Here's Leslie (on the right) and her friend Megan (a.k.a. Mango). And a photo-bomb from Jordan & Andy! 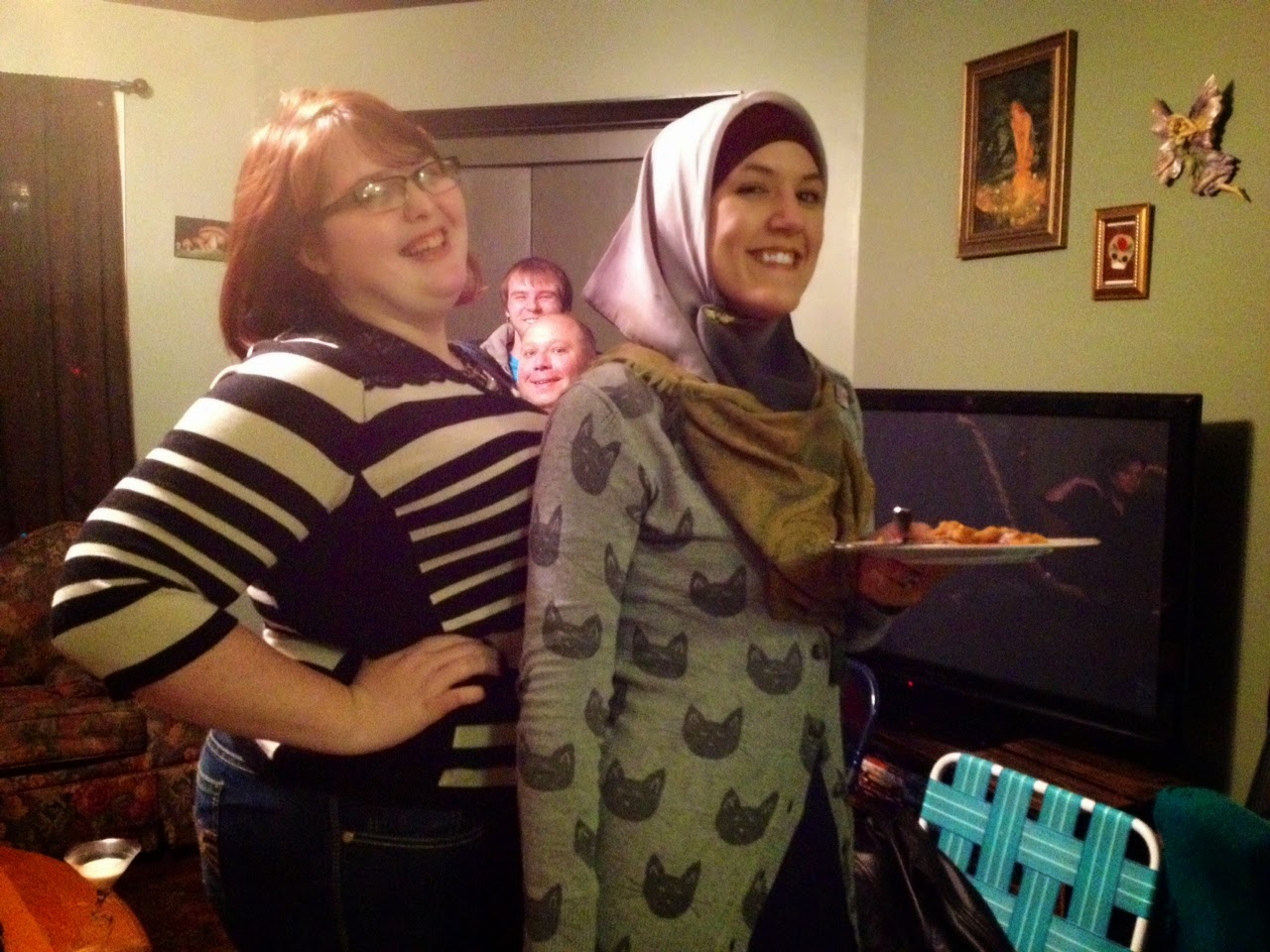 We had a nice turnout with lots of new vegan friends! Here's Steven, Greg, Susan & her boyfriend, and Karen. 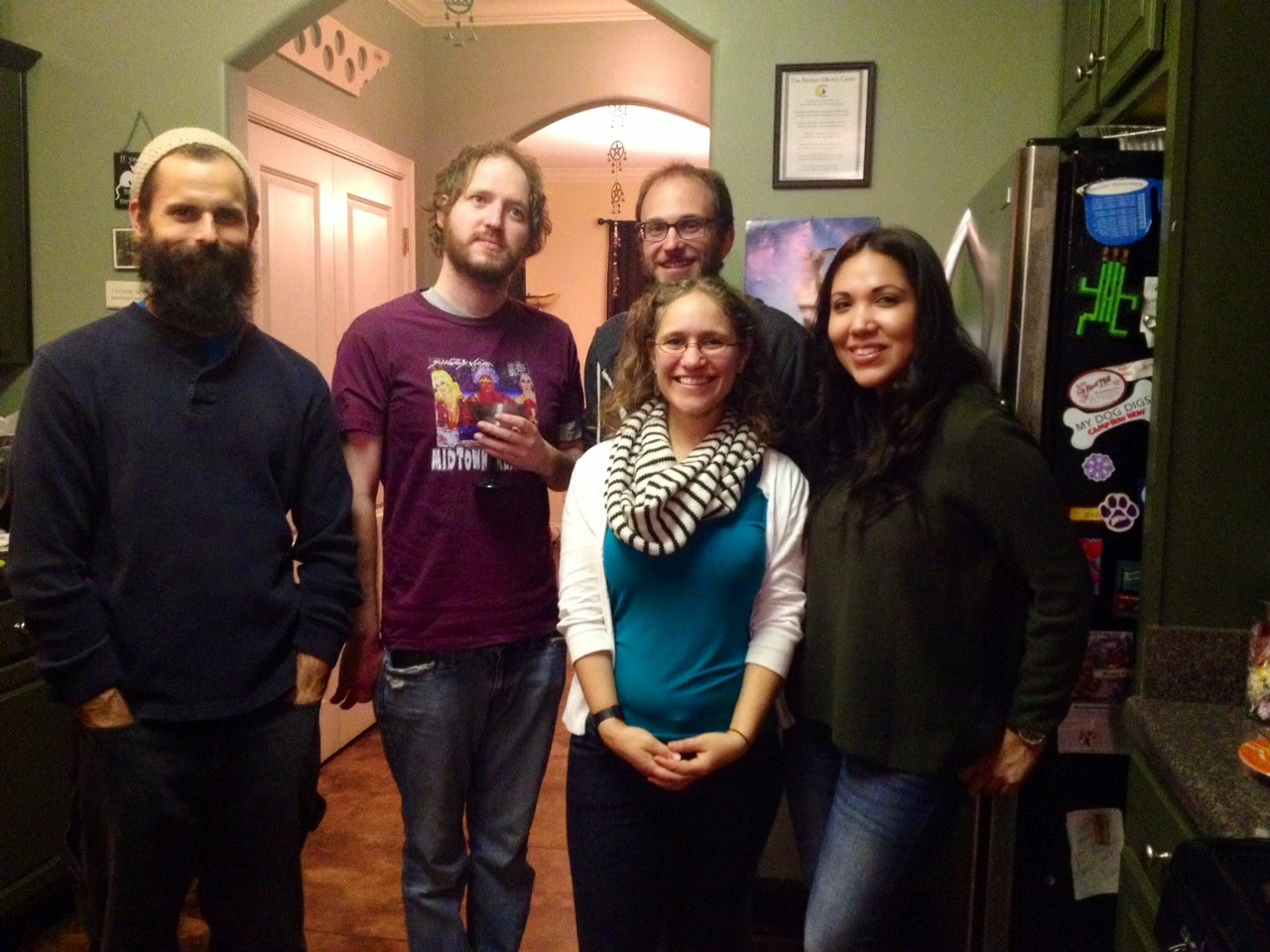 Karen made an insanely delicious Pumpkin Stuffing. Underneath the crumbly cornbread topping are white beans, cranberries, and savory spices. Lucky for me, she left the leftovers here! 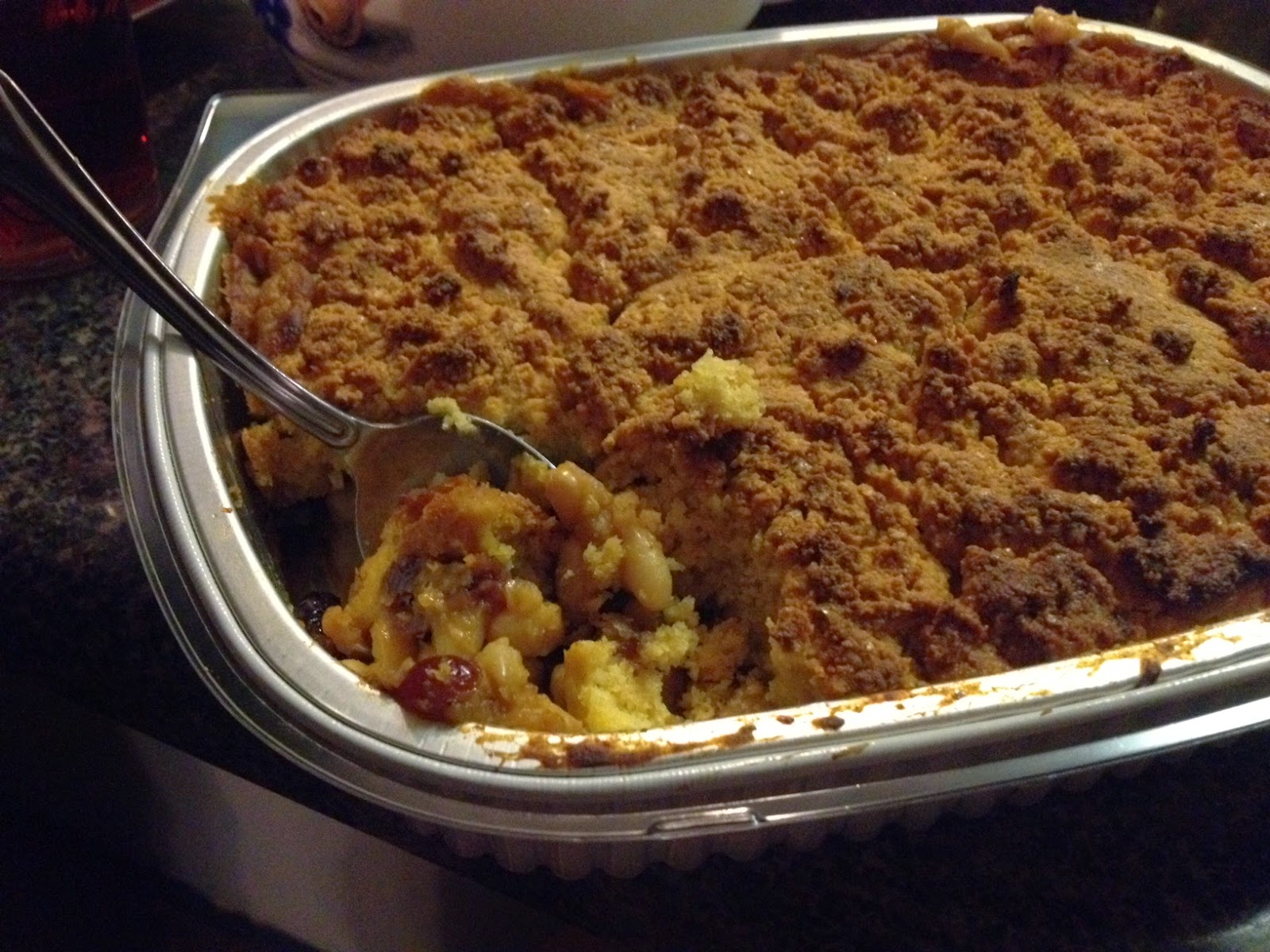 Susan made a Pumpkin Quinoa Risotto, and (not pictured), she brought pomegranate seeds to sprinkle over the top. Really creamy and yummy! 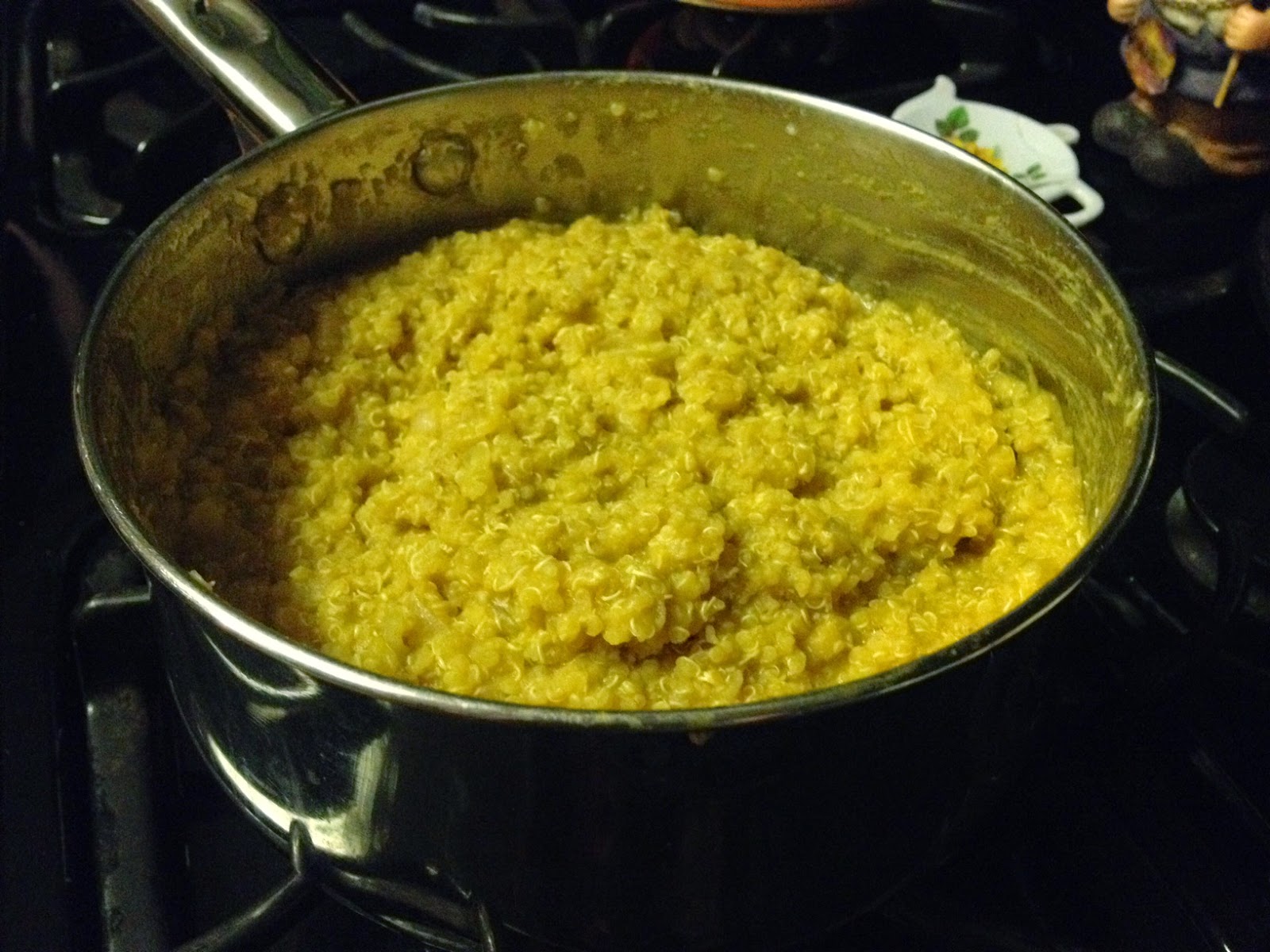 Nico made a fantastic Pumpkin, Butternut Squash, & Apple Roast. Sweet and savory at the same time! 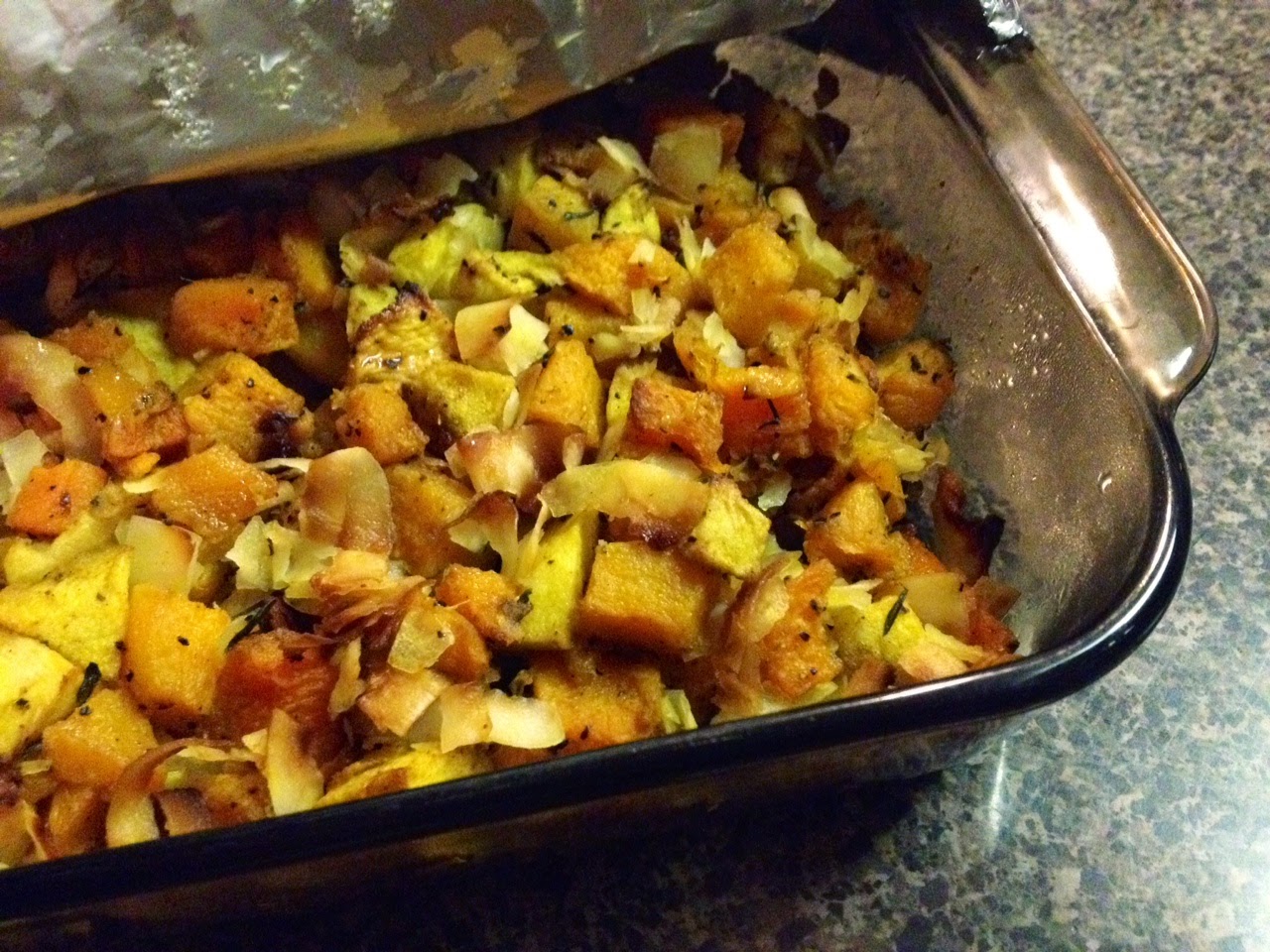 Nico also brought tubs of Lilly's Pumpkin Pie Hummus and (not pictured) Chocolate Hummus! I didn't even know these existed, but now I'm so glad I do! And I'm so glad she left me some too. The pumpkin pie hummus sounds like it'd be sweet, but it's not at all. It's savory and amazing. The chocolate hummus is slightly sweet but still more hummus-y than chocolately. It could go either way — dessert or dinner. 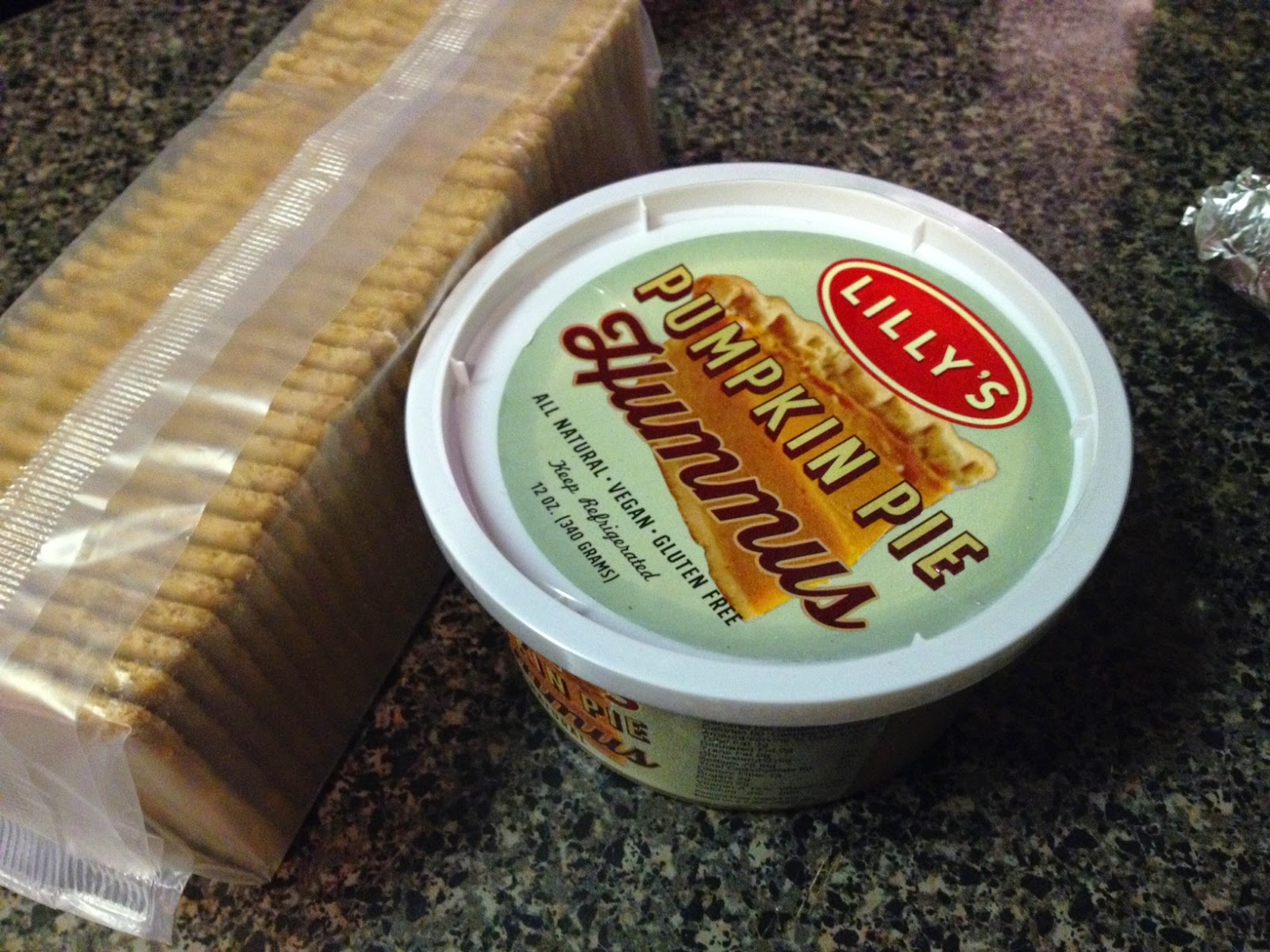 A adorable (new to me) couple that I just met at the potluck (and whose names I cannot remember!) brought over a creamy Pumpkin & Cauliflower Dip. IT WAS SO GOOD! I wish I'd gotten the recipe (and remembered their names!). 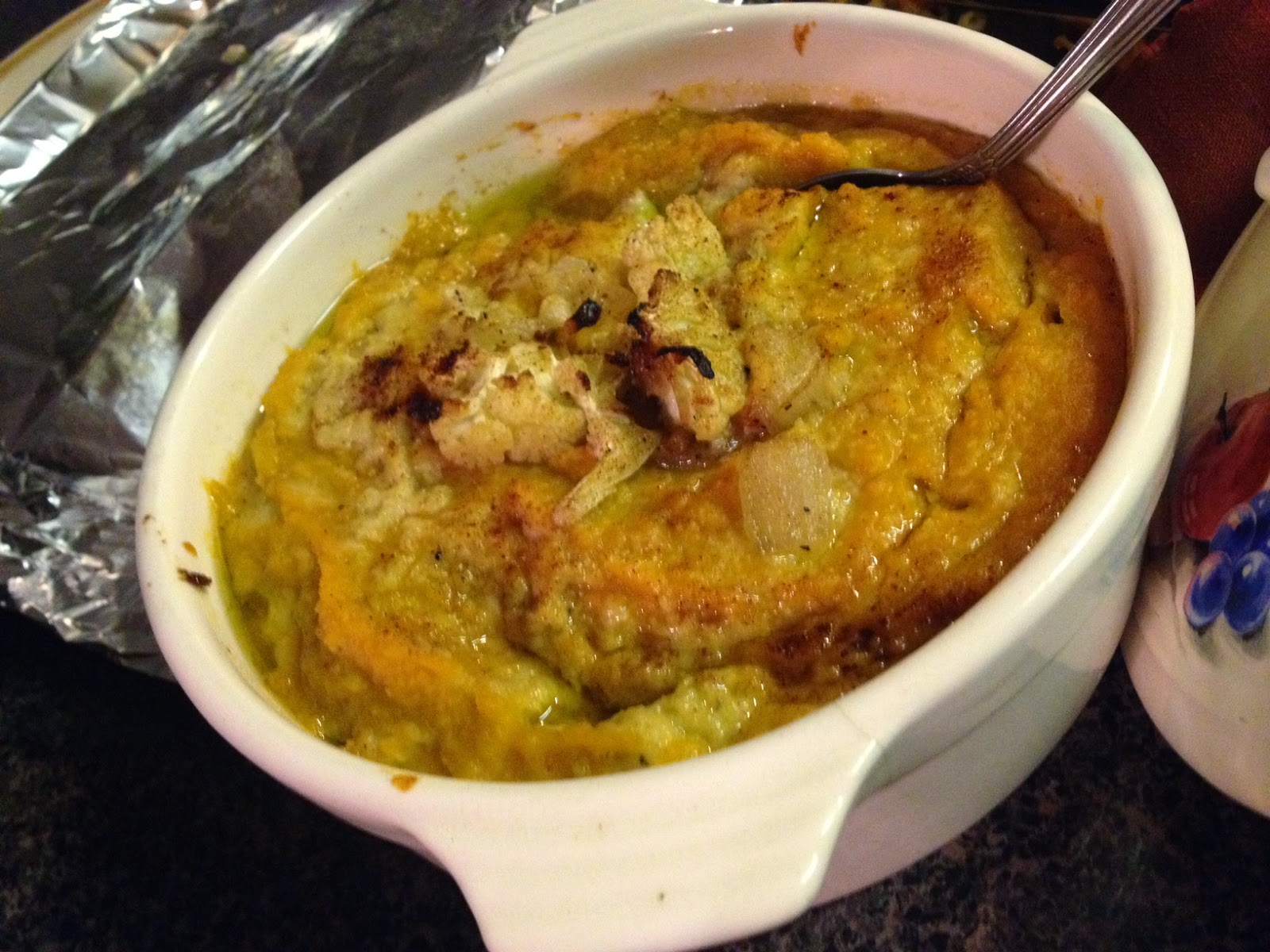 Now Greg doesn't know how to play by rules, of course. So he went all rogue and brought Cauliflower Fritters. They definitely look kinda weird, but trust me, they were ridiculously delicious. Like little fried cauliflower & carrot pancakes. 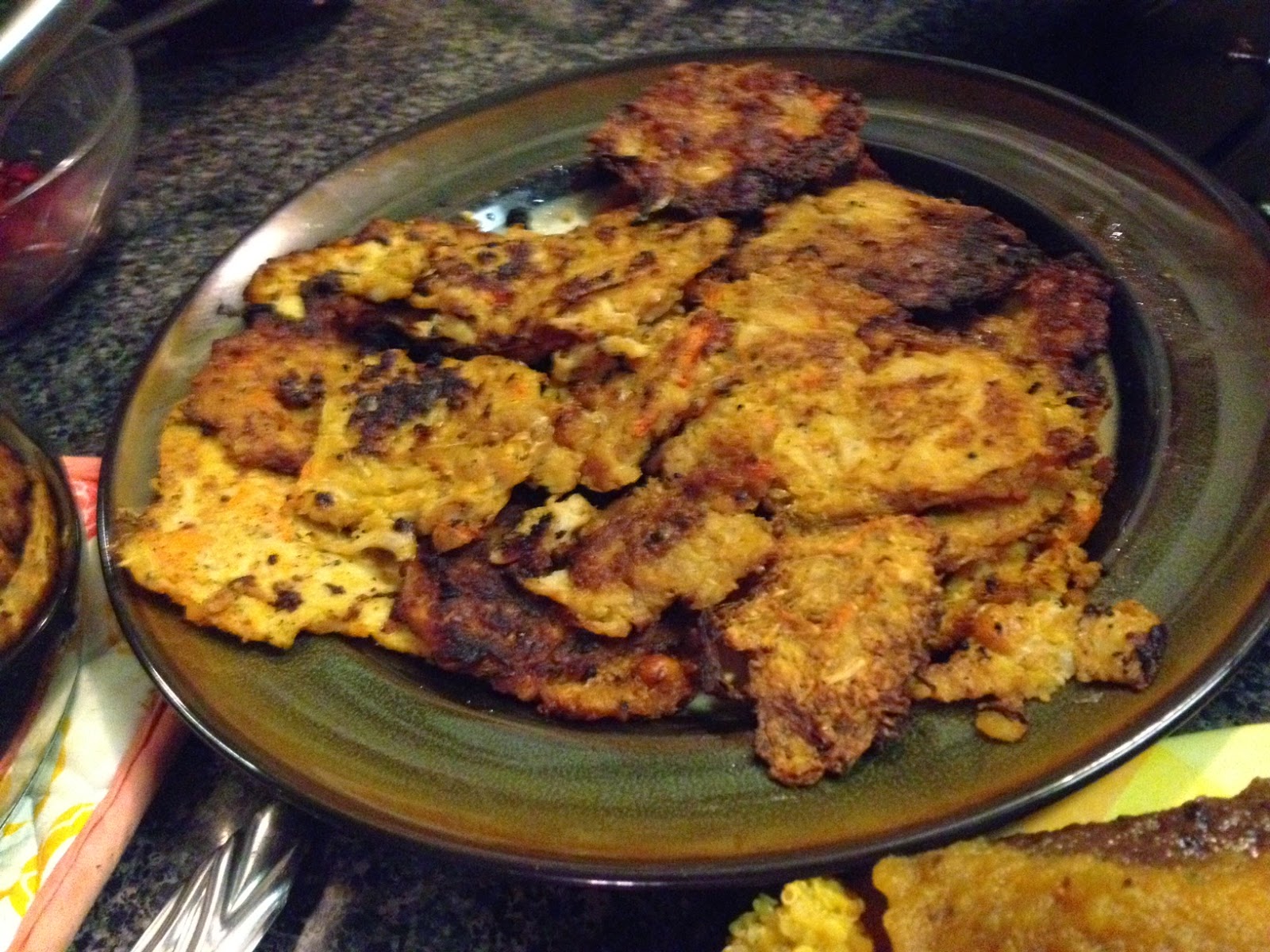 I made the Pumpkin Chili from Thug Kitchen! It's the first thing I've tried since I got the book, and man was it good. There's a whole can of pumpkin puree in the chili, and that makes it extra creamy. I didn't get a good shot of the chili in the Crock Pot, but here's a small bowl on my entree plate. It was loaded with veggies (carrots, peppers, onions) and beans (black, pinto, great northern). 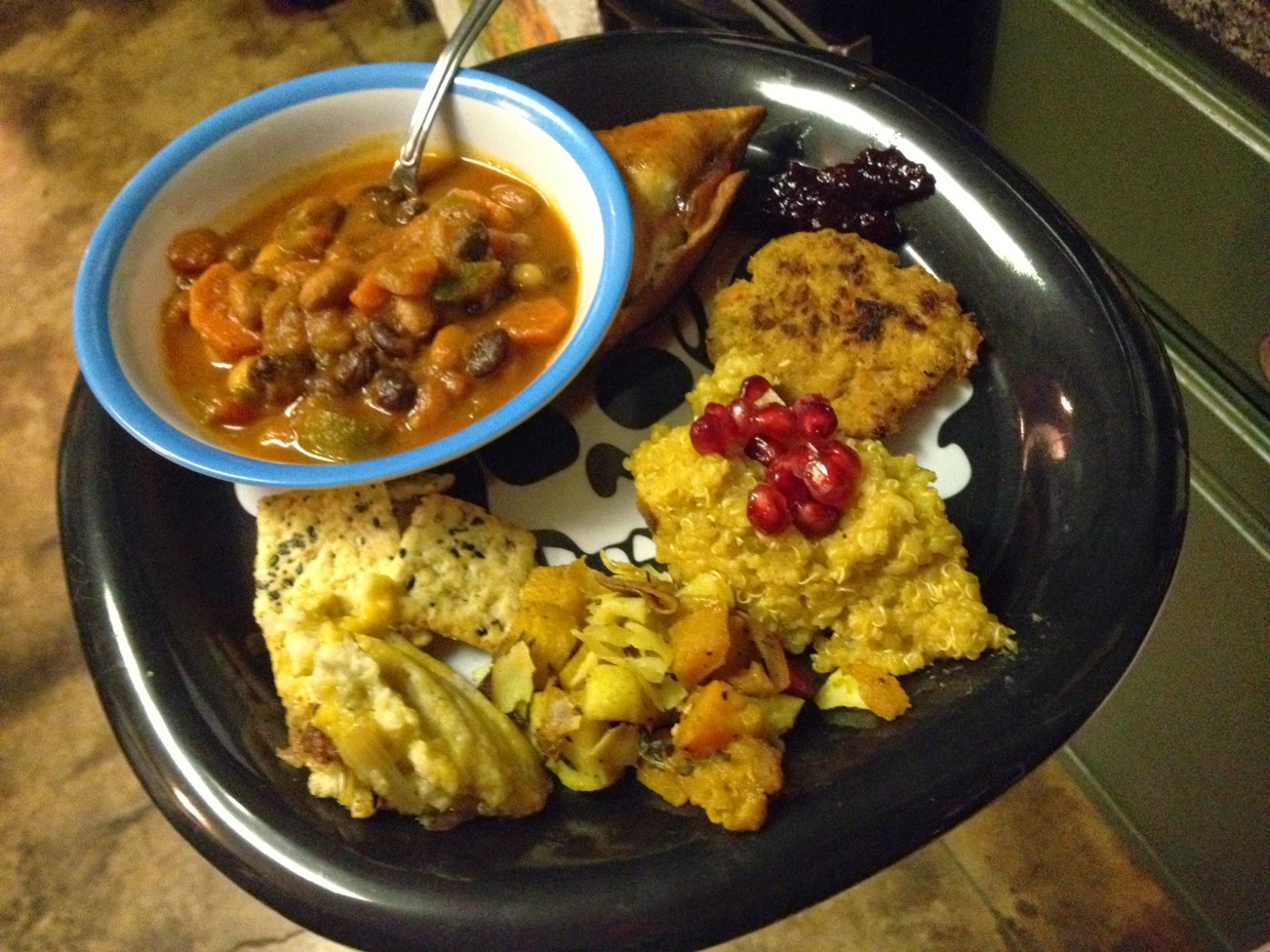 It's not a pumpkin potluck without pumpkin pie, right? Both Nic (making the cool guy face or whatever that is) and Erica (in the rainbow wig and tiara!) brought variations on pumpkin pie! 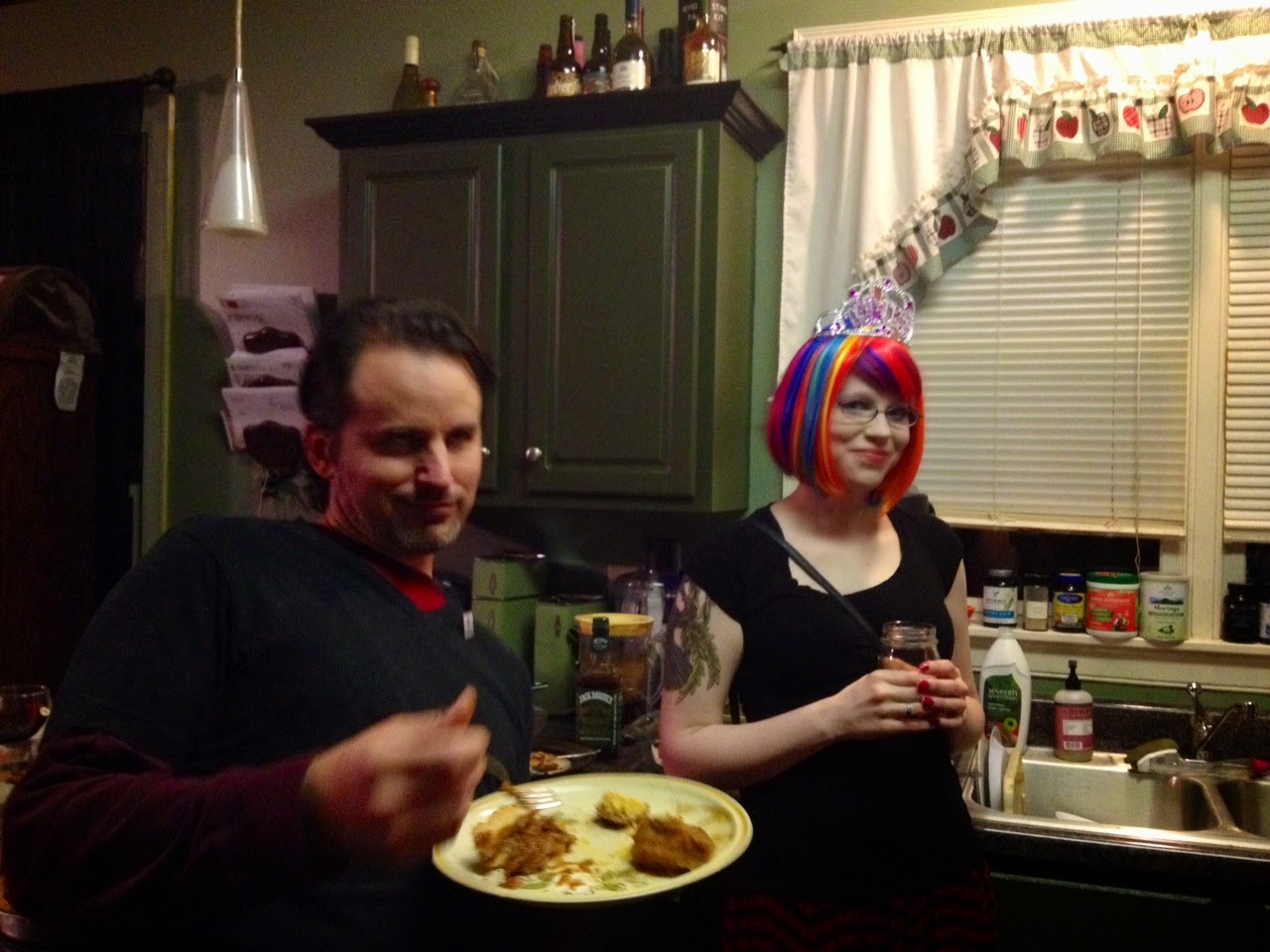 Erica made THREE traditional Vegan Pumpkin Pies!! She left me half of a pie, so I had the leftovers today topped with Rice Whip. I really enjoyed having some pumpkin pie because my family doesn't have it for Thanksgiving, so most years, I go through all of fall without pumpkin pie. I'm the only one in my family who likes pumpkin. Crazy! 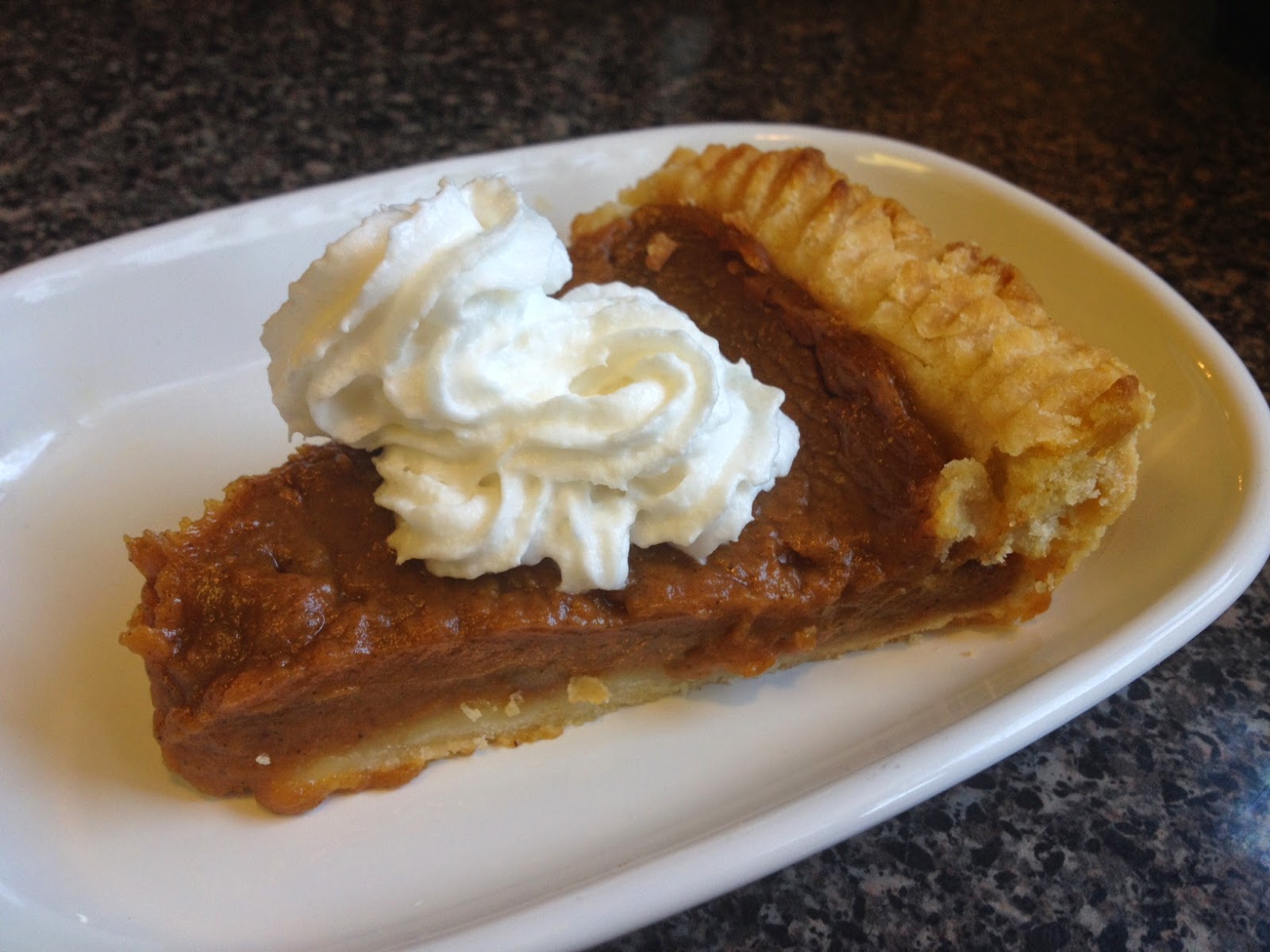 Nic made a Butternut Squash Ice Cream Pie with a Raw Nut Crust. This frozen pie was creamy on the inside with a chewy, nutty pecan crust. So good! 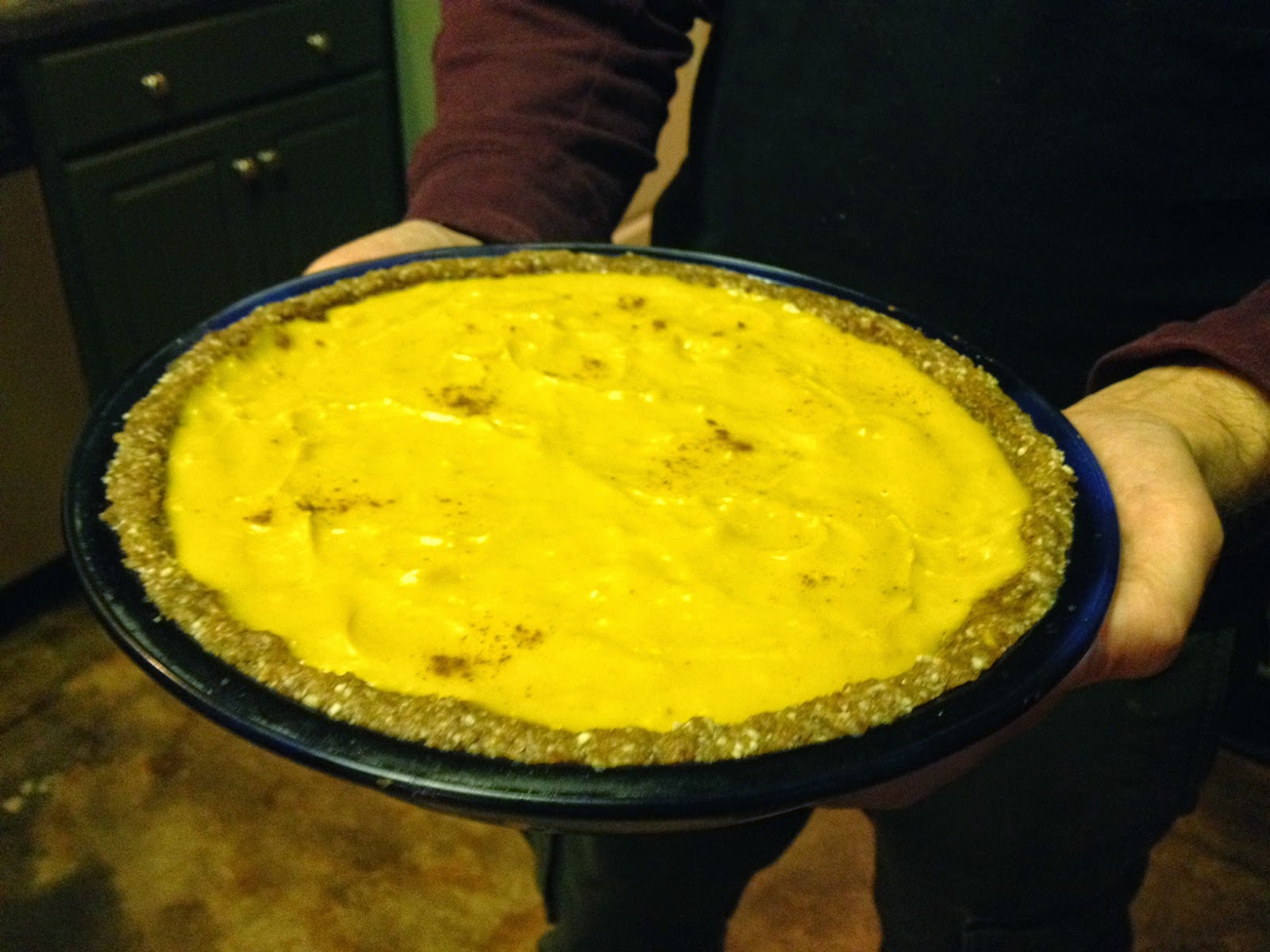 Speaking of raw, Steven made Raw Pumpkin Brownies. He used pureed pumpkin and a pecan crust. These were chewy and creamy and super-healthy! 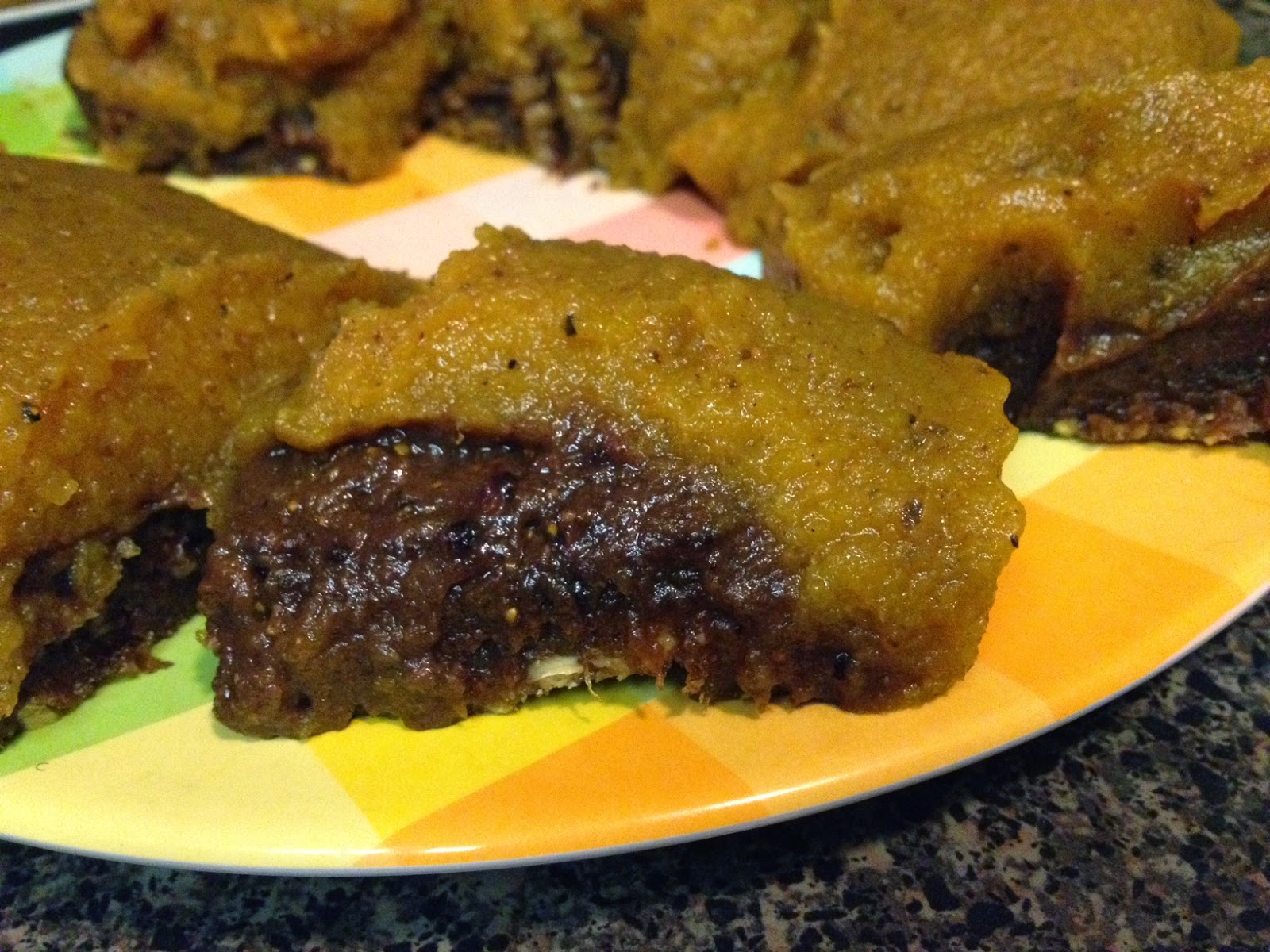 And finally, every potluck must end with cake, right? Cassi brought Chocolate Pumpkin Coffee Cupcakes with Pumpkin Buttercream. She just got a Kitchen-aid, and she's been going a little baking crazy. And that's good news for us. These were delicious. 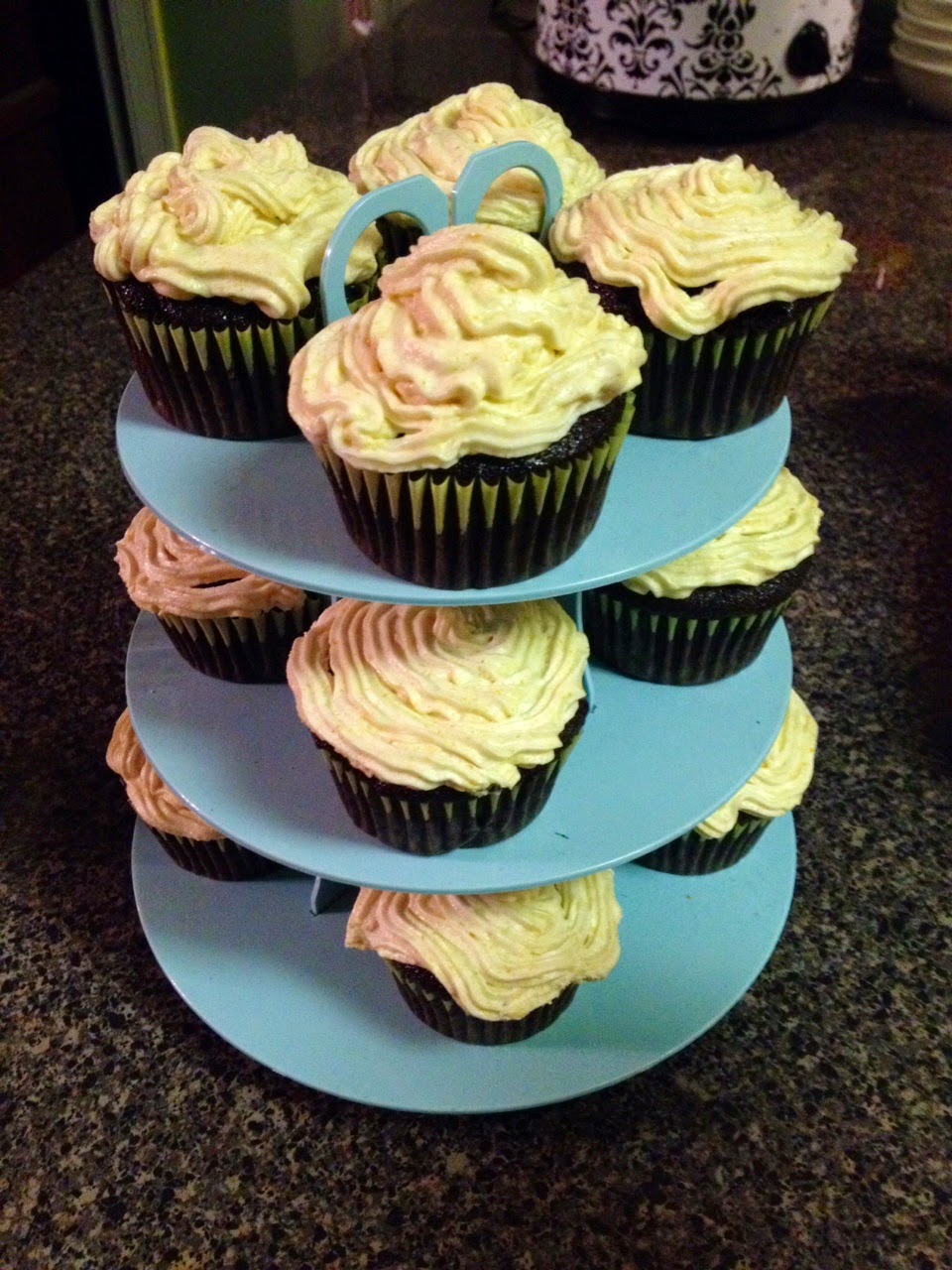 Those pumpkin Samosas and pumpkin stuffing sound especially amazing! What a fun theme.

This all sounds sooo good. I'll take two of each. I like the rogue fritters, ha!
my family likes pumpkin pie on Thanksgiving but it's never vegan, so it's been a long time since I've partaken...

Ummmm...Pumpkin Samosas are now going to be the main attraction on my Thanksgiving menu! Woohoo.

yay!! as you know, I love me a good potluck. This looks amazing - so much pumpkiny goodness. I like having potlucks with just a few close friends, but I also really like potlucks with lots of new friends to know and meet. This looks like so much fun.

A pumpkin themed potluck is genius! Where do you get that pumpkin hummus?! That sounds amazing! The cauliflower and pumpkin dip also sounds great... heck, everything sounds amazing! And yes please to all of the desserts!

looks so fun! (and delicious!)