Julie Hasson has gone and done it again! The woman who gave us steamed vegan sausages, the first-ever vegan pizza cookbook, and vegan pot roast has written the first (and best!) tome about the ultimate comfort food — casseroles!

Y'all know this is right up my little Southern cookin' alley. I roll my eyes at pretentious, overly garnished meals that are more about plating than pleasing the palette. Fancy just isn't my style. But casseroles?! Yea, that's my language. That's the kind of good eatin' I grew up on. Needless to say, I was thrilled when Julie's Vegan Casseroles arrived in my mail. 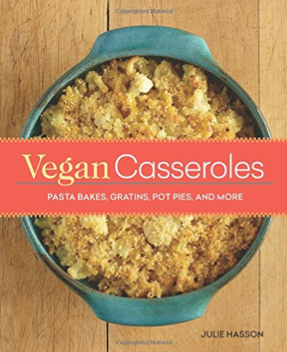 Now the casseroles I grew up eating were the sort of throw-it-together meals made from condensed globs of mushroom soup and processed cheese food. And those things make for delicious casseroles, don't get me wrong. But Velvetta ain't vegan.

Because so many vegan convenience foods like that just don't exist (and wouldn't be healthy if they did), Julie makes her bases and sauces from scratch. There are recipes in the book for homemade Cream of Vegan Chicken  Soup, several gravies, and a cashew-nooch cheese sauce. And those are stirred into casseroles and baked in the oven. I had my little heart set on trying some casserole that called for her Almost Alfredo Sauce made with white wine. So I picked this Creamy Rice & Dill Casserole. 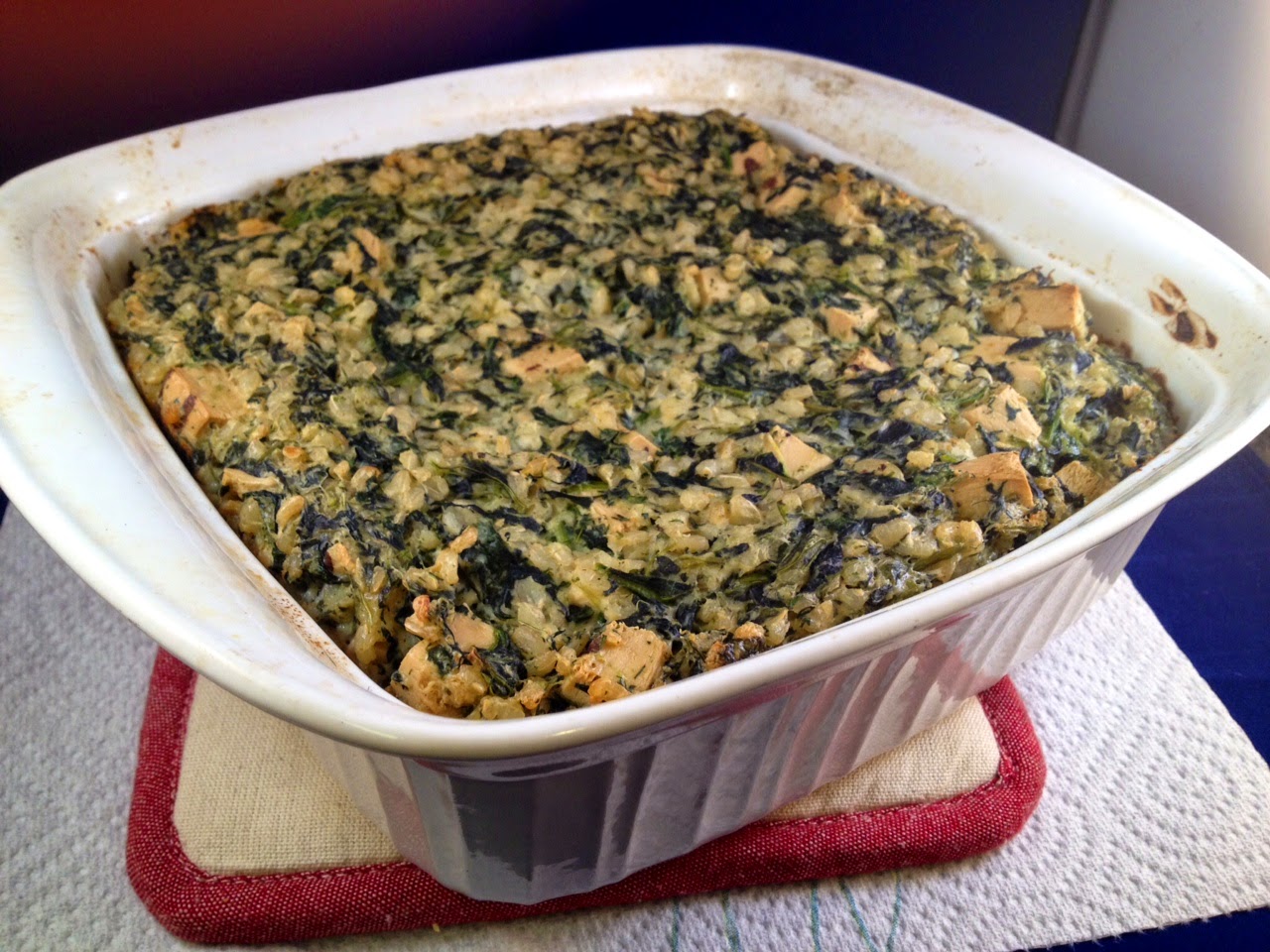 Sure, it's not so pretty. But are casseroles ever pretty? A pretty casserole probably doesn't taste very good. But this one tasted fantastic! A generous amount of cashew-white wine cheese sauce is mixed with brown rice, vegan chicken (I used Beyond Meat), fresh dill, and spinach. And then it's baked in the oven for a bit. The best part of any casserole are the crusty edges! 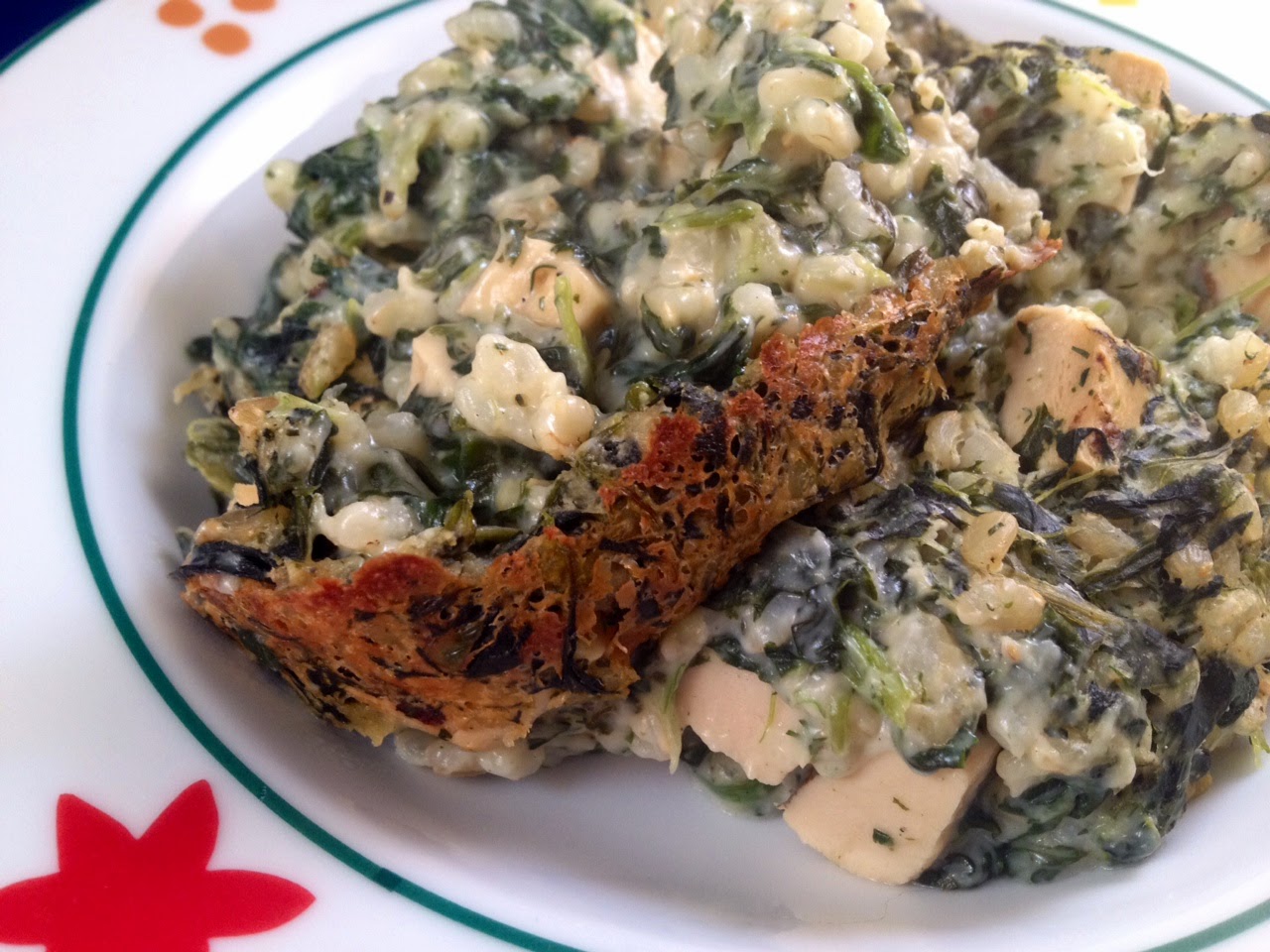 This casserole is so creamy, and I love that it's so full of healthy green goodness. I enjoyed this with a side of collard greens for extra alkaline fun.

And there are so many recipes that you'll want to try too! And you just might have a chance at winning one of five copies of Vegan Casseroles! The publisher is hosting a giveaway using Rafflecopter. The grand prize winner will receive a Breville Smart Oven, and five other winners will get Julie's book. The contest is being hosted by all the blogs on Julie's blog tour, rather than just on my blog alone. But your chances are still good! Give it a shot. The giveaway ends on November 12th.

a Rafflecopter giveaway
Posted by Bianca at 10:38 PM

Penne with Pumpkin Cream Sauce sounds perfect for this weather!

I think it's actually kind of pretty!

i love seeing the different recipes that everyone has made! I've made 4-5 dishes so far and loved them all. I have so many more marked that I still want to try. That creamy alfredo sauce is SO good!

i love casseroles! what a great idea for a cookbook!

Just in time for the Thanksgiving feast. My oven doesn't work so this would be the most fantastic win ever, recipes for food that I can actually cook!
Belinda

I'm all about them crusty edges! I even purposely overcook my brownies to the edges get burnt. I know. I'm a disgrace.

I really need this cookbook!! And I think your casserole look fantastic!

I would love to try the Creamy Rice & Dill Casserole.

[ Smiles ] Bianca, you seem to have all the fun where vegan food is concerned.

By the way, I love your blog!

Thanks for the giveaway!

I would love to try the Creamy Rice and Dill casserole.

The nacho casseroles sound good and the veggie and dumplings. Thank you for the give away!

I enjoy your blog. I would like the veggie and dumpling

Maybe the veggie and dumpling?

Mmmm, rice and dill casserole?! GET IN MY MOUTH NOW!

I love Julie's books. I have (and use frequently) her Vegan Pizzas book and the Vegan Diner. All of those casseroles sound amazing!

Love casseroles-one of my faves always was tuna noodle...I used to make it as a vegetarian without the tuna and added artichoke hearts instead, but as a vegan my attempts haven't been so great, so I'd love a replacement for cream of mushroom soup.

I've never actually had a casserole before. they were never a thing in my house. It would be a lot of fun to try.

I want to try the vegan almost Alfredo creamy casserole. All of these sounds good.

There is a spinach souffle that has water chestnuts in it that I am crazy about . That would be the very fist thing I would put in this super cool oven!

I would first try the Nacho Mac Casserole!