I should start this by saying that I'm by no means gluten-free. In fact, most days, I'm quite gluten-full. I'll eat ALL THE BREAD. But I have a deep love for gluten-free baked goods too! I like the slightly different texture, and I'm partial to the flavors of chickpea and brown rice flours. In fact, my very favorite ready-to-eat-with-a-spoon ready-to-bake cookie dough is made by the gluten-free magicians over at Eat Pastry.

I love their cookie dough so much that I proudly wear my Eat Pastry apron all the time! 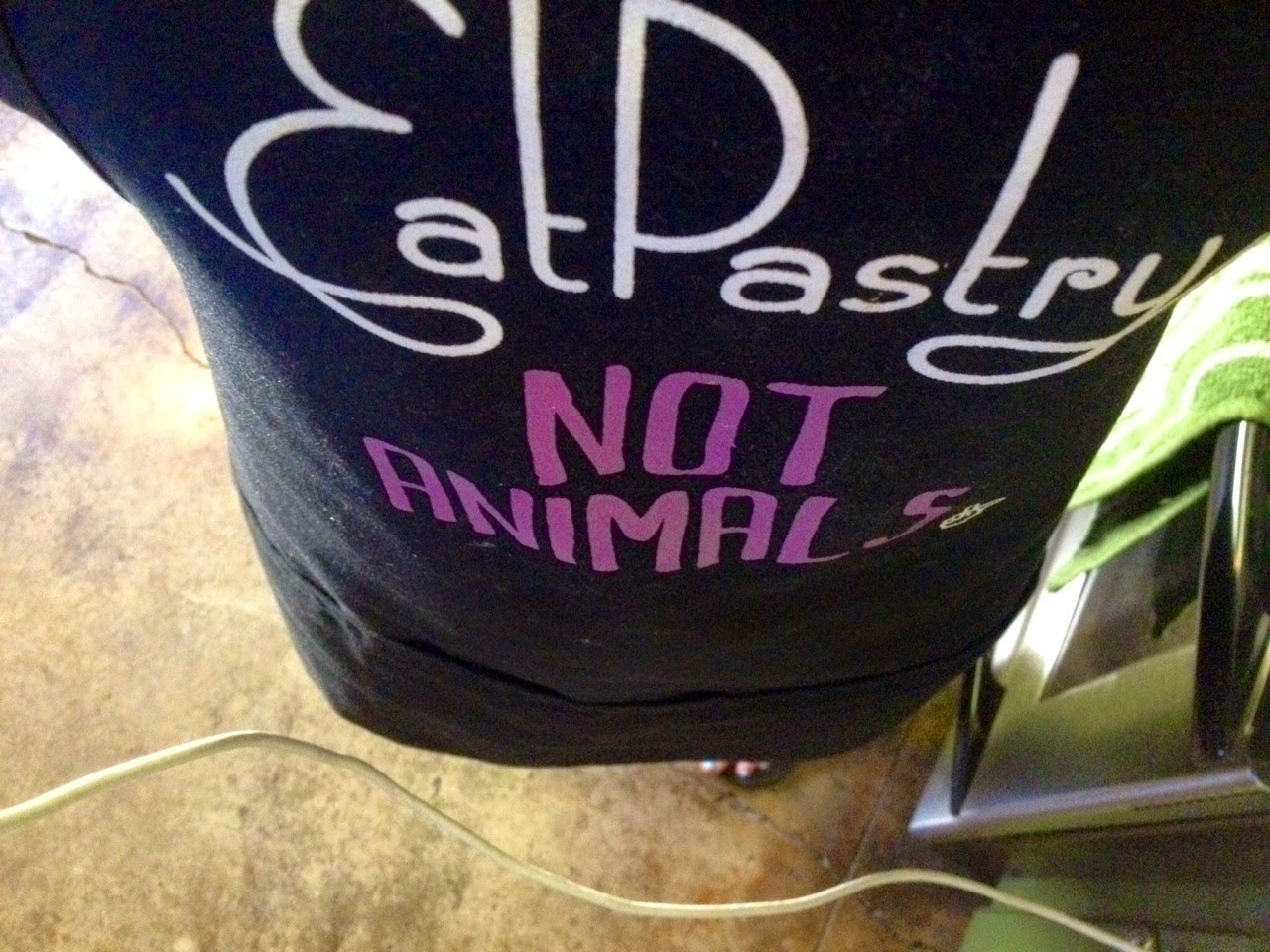 And I had to don that very apron recently to try out a couple of Eat Pastry's new gluten-free baking mixes! 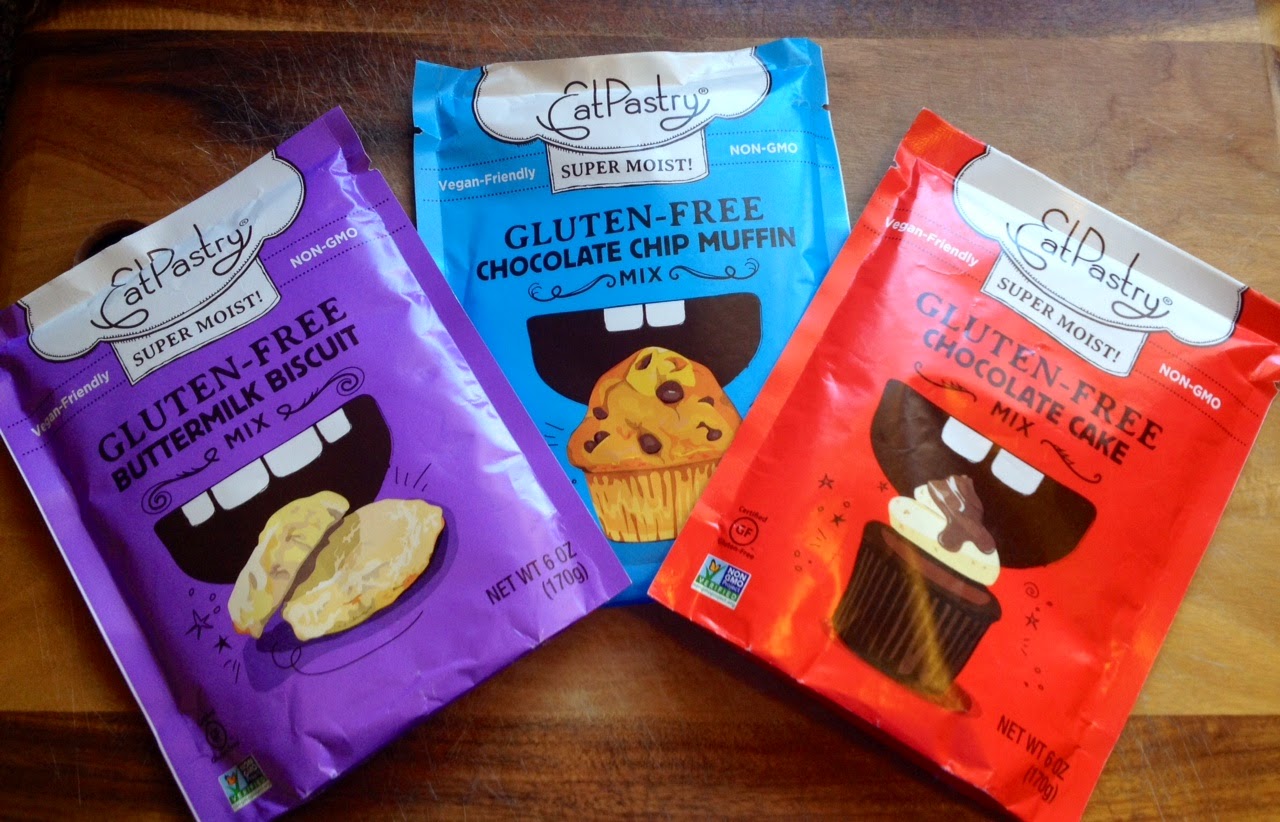 Let's start with that Gluten-Free Chocolate Cake Mix. As you probably know (because I've mentioned it here five million times), my birthday was last month. And even though I had a professional vegan birthday cake (by Stephanie!) at my official party on the day after my big day, I needed a smaller batch of dessert for my actual birthday. I went to my friend Shara's house that night, and I wanted to tote along some cupcakes. 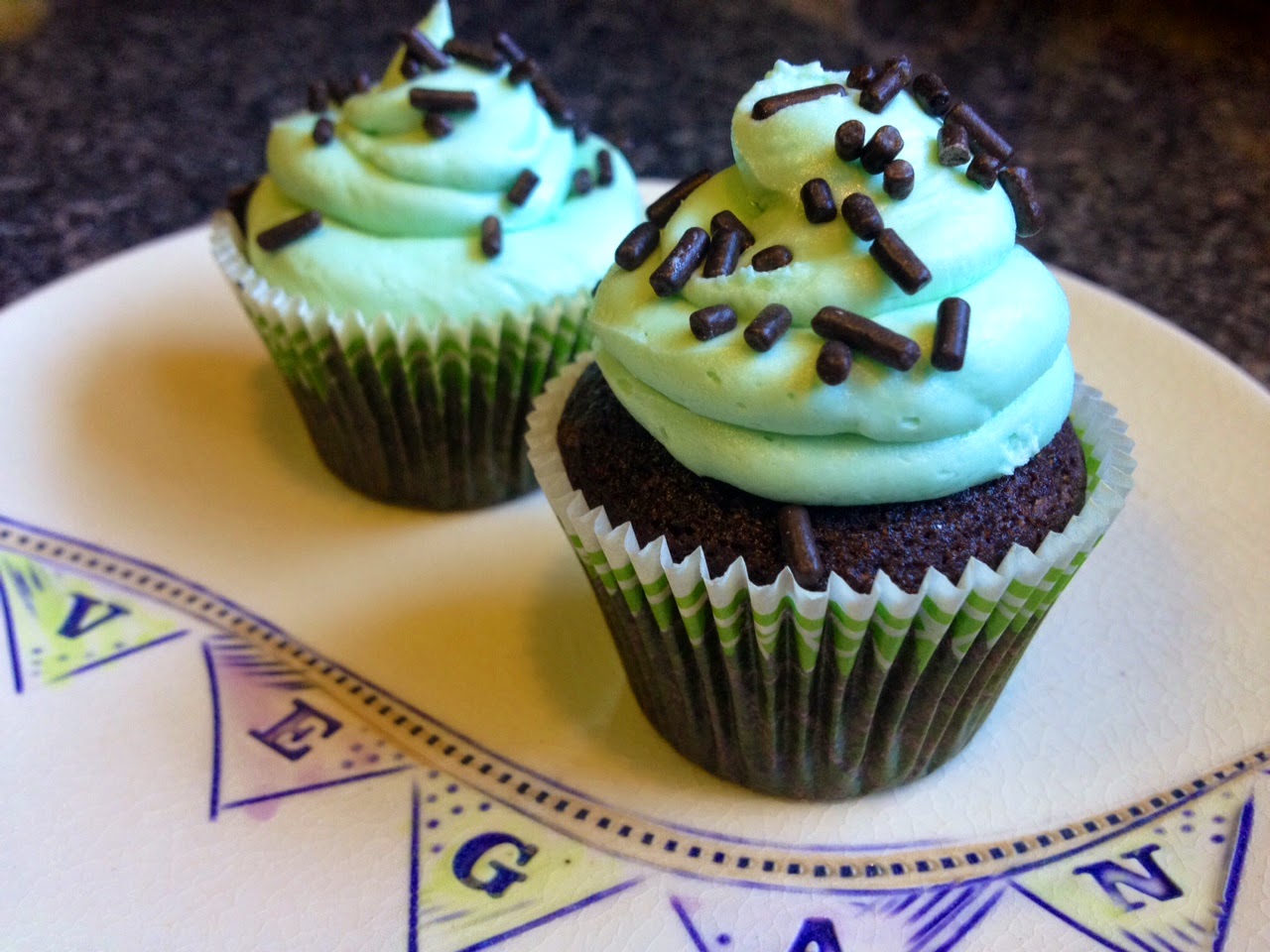 It seemed like the perfect time to try out this new mix! The mix is very versatile, and there are all kinds of suggestions on the back of the package for ways to use it — sheet cake, cupcakes, brownies! I opted for the Mint Cupcakes variation, which involved adding a 1/2 teaspoon of mint extract to the batter. Oh, and I added a bit of green food coloring to the frosting, made with my go-to buttercream recipe from Vegan Cupcakes Take Over the World.

These were so good!! The cake was light and airy, and honestly, if I didn't know it was gluten-free, I wouldn't have been able to tell. The folks at Shara's house — all non-vegans — enjoyed them!

Next, I tried the Gluten-Free Buttermilk Biscuit Mix. I've never tried gluten-free biscuits, so I had no idea what to expect. 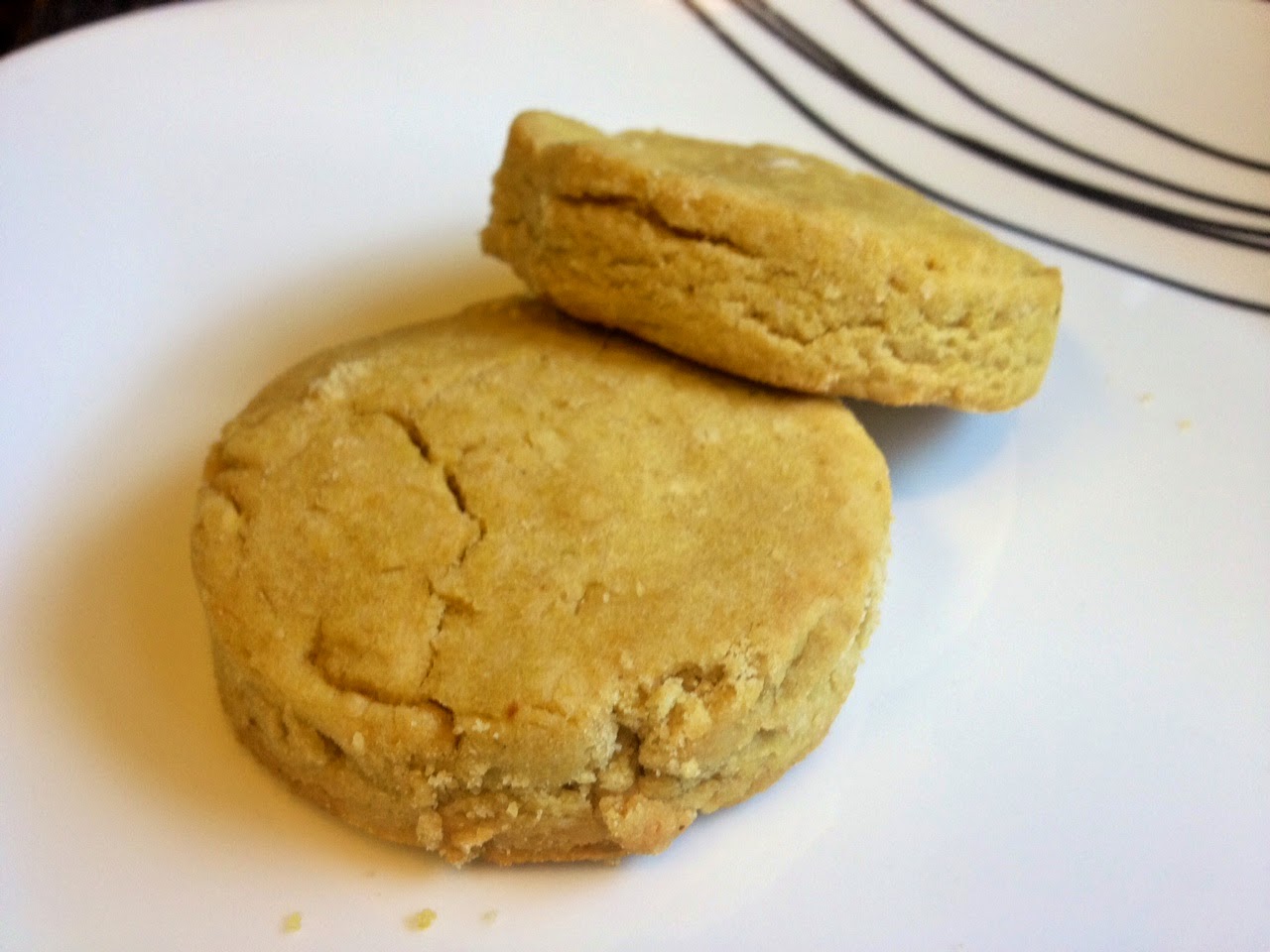 The dough rolled out nicely, and it was easy to cut the biscuits and transfer them to a baking sheet. They didn't get quite as fluffy as my homemade gluten-containing biscuits do, but that's okay. I loved the flavor — the chickpea flour really shines though. They were a tad more crumbly than I'm used to, and the one I tried to split and butter fell apart. I found it was easier to eat them without trying to cut in half.

The biscuits were excellent served with my homemade Tofu Ham (from Cookin' Crunk!) and Redeye Gravy (just black coffee, tofu ham marinade, and oil). I used the redeye gravy for dippin'. Yum! 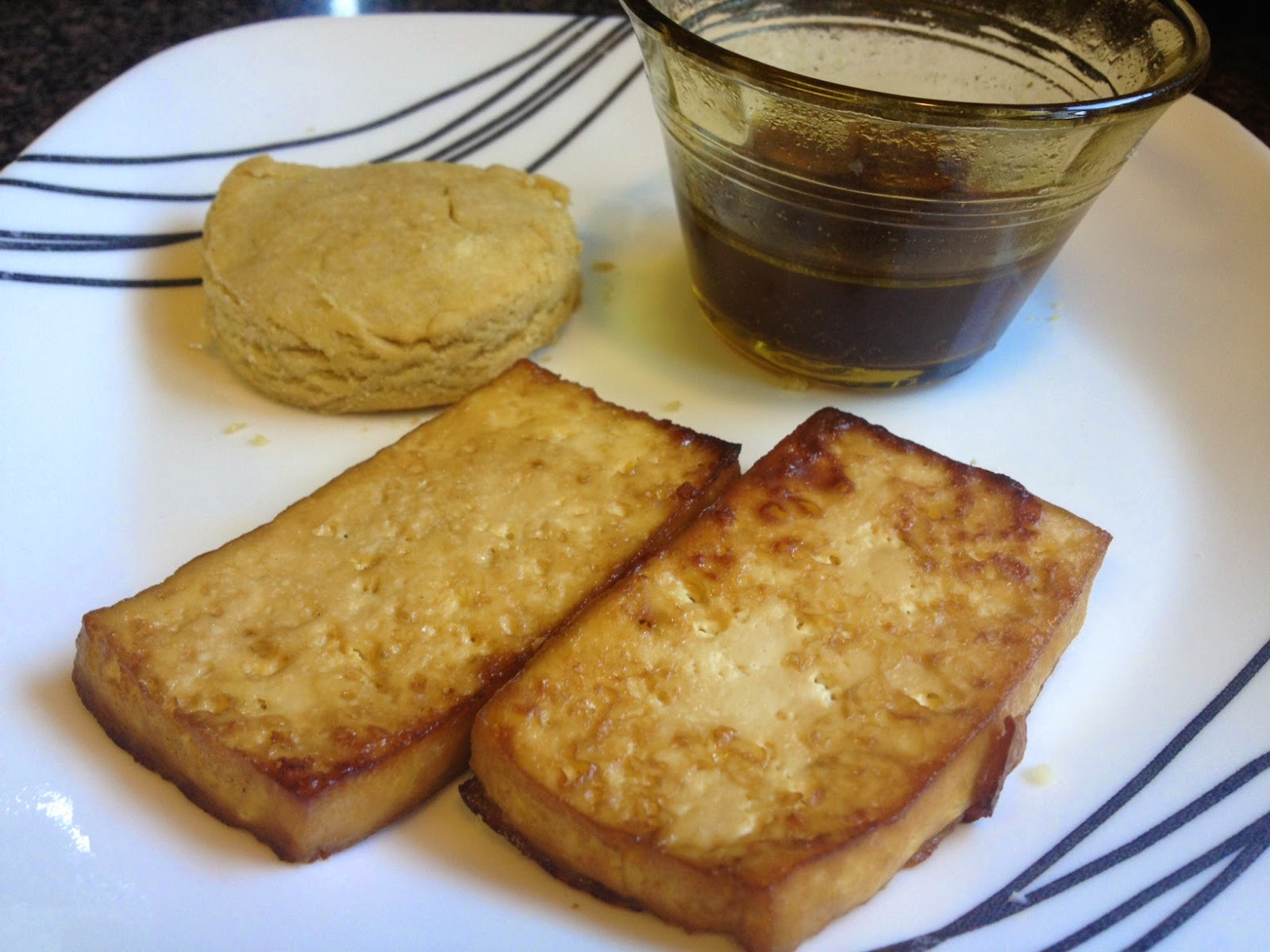 Unfortunately, the Gluten-Free Chocolate Chip Muffin Mix didn't work out so well. When my package of samples arrived in the mail, there was a letter from Eat Pastry letting me know that the samples I'd received were still being tweaked. The letter said the final muffin mix would not contain chocolate chips.

After I attempted to bake the chocolate chip muffins, I understood why the chips were removed from the final product. All of the chips sank to the bottom of the muffin tins while baking, causing the muffins to stick my well-oiled pans. Typically, when baking with chocolate chips, you can just toss the chips with flour before adding to a mix, but I'm guessing gluten-free flours don't coat the chips as well. Anyway, the muffins broke to pieces as I tried to remove them. But I did sneak a few bites, and the flavor was spot-on. If you see the muffin mix in stores, and it doesn't contain chocolate chips, I'm sure it will work out just fine!
Posted by Bianca at 9:39 PM

I'm not gluten free either, but I make the cakes in my office and we have a few gf co-workers - these look great when I'm short on time and have to feed the office cake! :)