I've had a late night at work and just now finished up a news story on some school board issues after a grueling three-hour meeting. And that means I worked 13 hours today! So quick post before I down a much-needed glass of wine and hit the hay.

I mean, all I really need to show you is this! 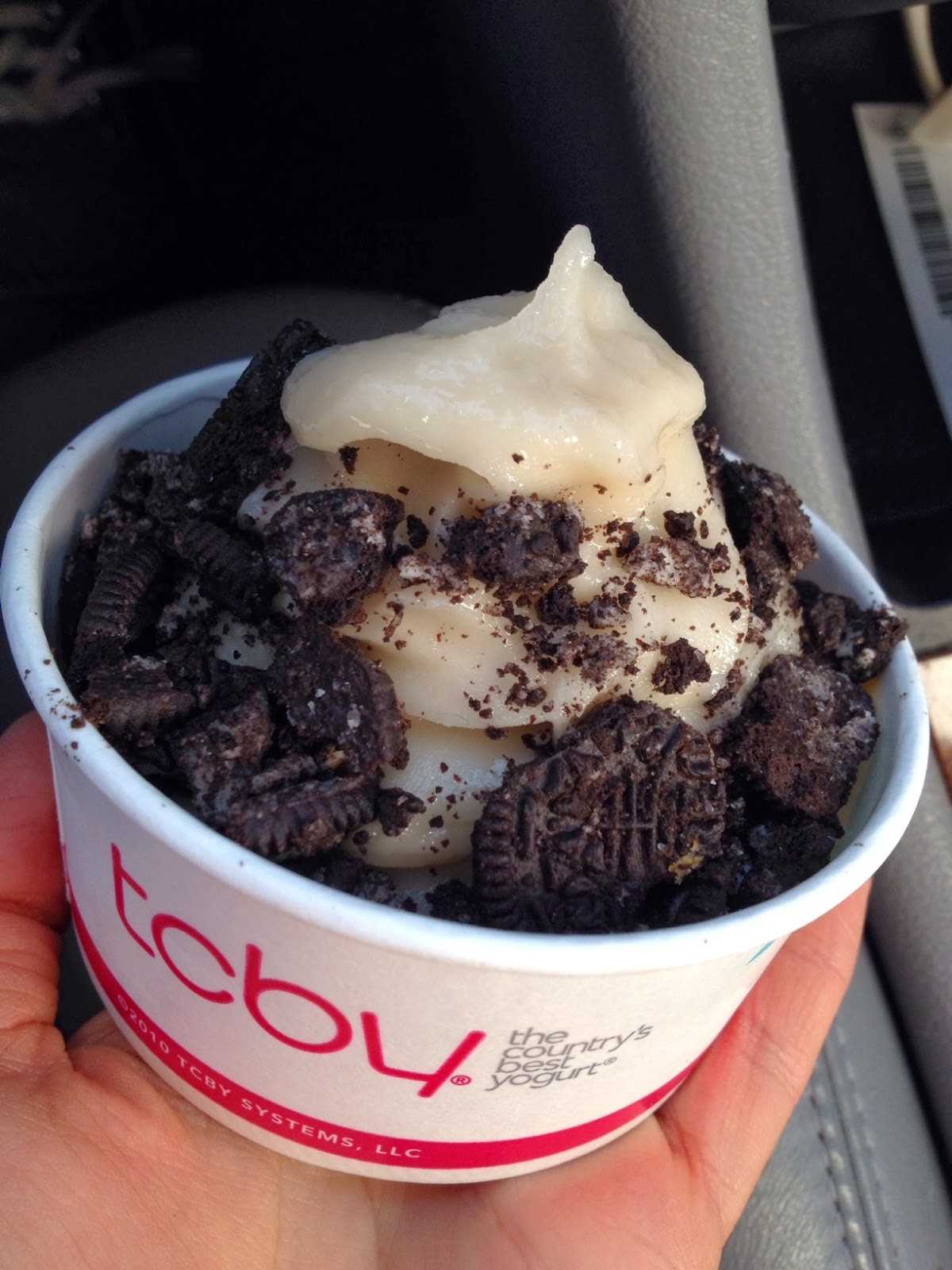 And I think it speaks for itself. If you haven't heard, TCBY has introduced a vanilla Silk almond milk yogurt. And you can put Oreos on it!!! Vegan soft-serve heaven. I enjoyed this little treat on Saturday afternoon.

Last fall, TCBY introduced its first vegan yogurt — a chocolate Silk almond milk yogurt. That flavor is on hiatus while vanilla makes its debut. But honestly, vanilla beats chocolate in my book any day. However, I am anxiously awaiting the day when they have both flavors on tap, and I can get a chocolate-vanilla swirl!

I was doing a little internet research on the new flavor, and I came across this article on the Dallas Culture Map website. They interviewed Dustin Finkel, VP at TCBY's parent company, Famous Brands. And he had this to say about the popularity of the Silk almond milk flavors:


"We underestimated the response we were going to get. One of the areas that I completely missed the mark on in terms of expectation was the vegan audience. I expected a response from health-based and lactose-intolerant consumers. But the greatest response has been from the vegan market, and it's been one of the key drivers in the launch of the vanilla flavor."

Let that be a lesson to you, corporate America. Never underestimate the power of the vegan market. We may only make up a small portion of the population, but we're loyal as hell. And we buy lots of food because we love food in a way that no omni can understand. Make vegan stuff, and we'll come. Thanks TCBY for takin' a chance on us.
Posted by Bianca at 10:06 PM

I can't wait til summer so I can have my chocolate back!!!

High Five TCBY! I hope I can find the chocolate on one of my trips to the US.

whoah, awesome! I don't live near a TCBY, but I'll make sure to remember this for next time I am out of town if I run across one!

YUM! also, school board meetings do take up a huge part of the night. i feel your pain. luckily, MOST of the time, they put the construction reports early, and I can leave after that. doesn't always make it better when they're at a school 3 hours away :/ ice cream would make it better

Which location had this? I went to the one on Poplar & Highland (by Buster's) a few weeks ago and they didn't have it yet. Can't wait to try it!

"And we buy lots of food because we love food in a way that no omni can understand. Make vegan stuff, and we'll come." - THIS. A million times, yesssss! haha! I love it and it's so true.

I actually haven't tried the almond milk yogurt yet, but I need to fix that! Next time Drew and I want a treat, we are heading to TCBY!

Melbam, I found it at the TCBY on Union in Midtown. :-)

The TCBY just a mile from my work has BOTH on tap for swirl :D It was the downfall of my weight loss for a while :P But I'm past that now.... mostly :D I usually add strawberries, blueberries, and pecans. YUM!!

This has been the most exciting thing to come near me! I haven't tried the vanilla yet..just the chocolate a few months ago - sooo exciting! now if only other major chains got on the vegan wagon...