This was supposed to be a standard review post for LouAna Coconut Oil. They sent me a jar to try, an offer this coconut oil fanatic couldn't refuse. 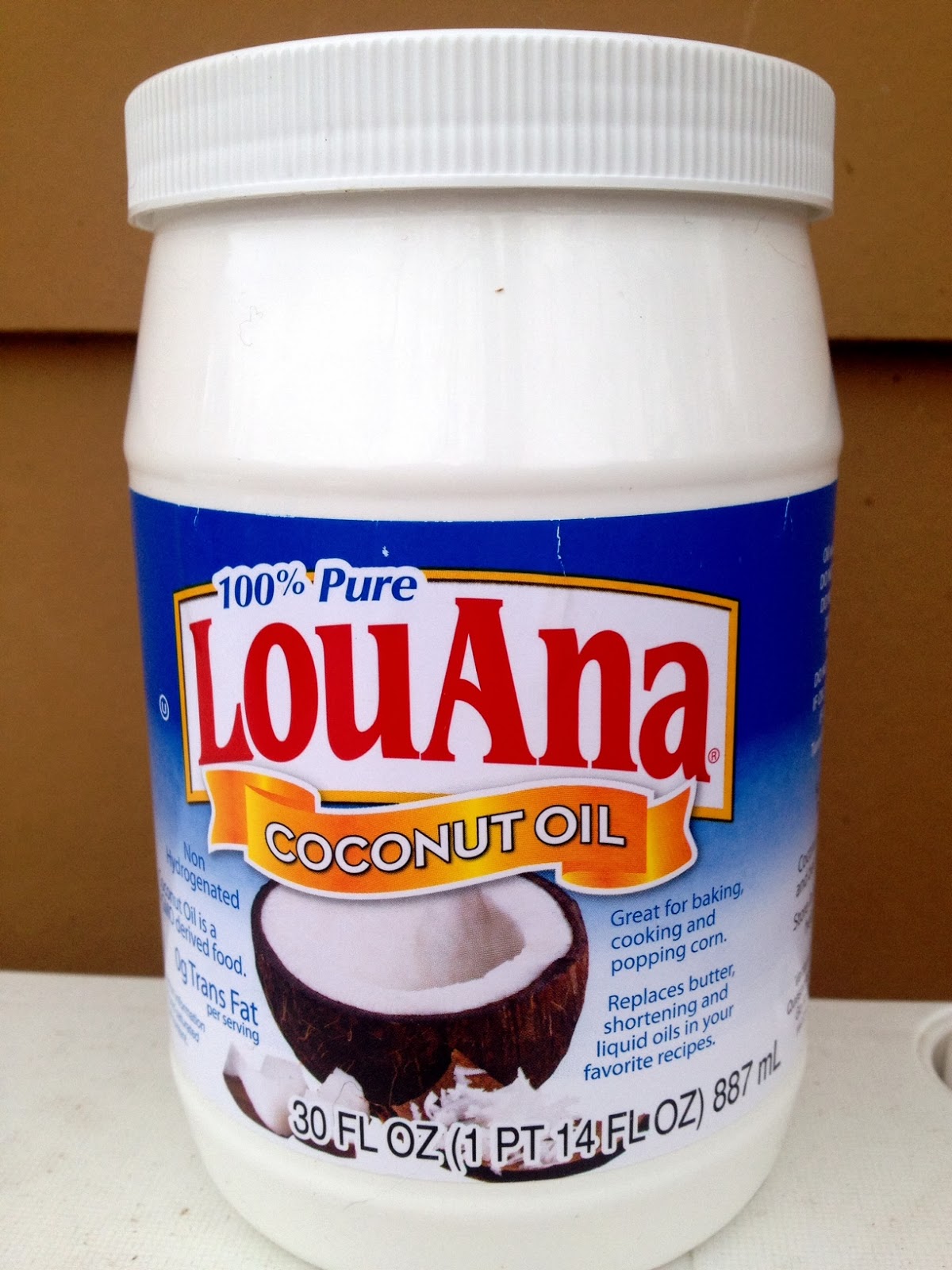 I typically use coconut oil for sauteeing veggies, so that's what I planned to use when I made a curry Friday night using this sauce. 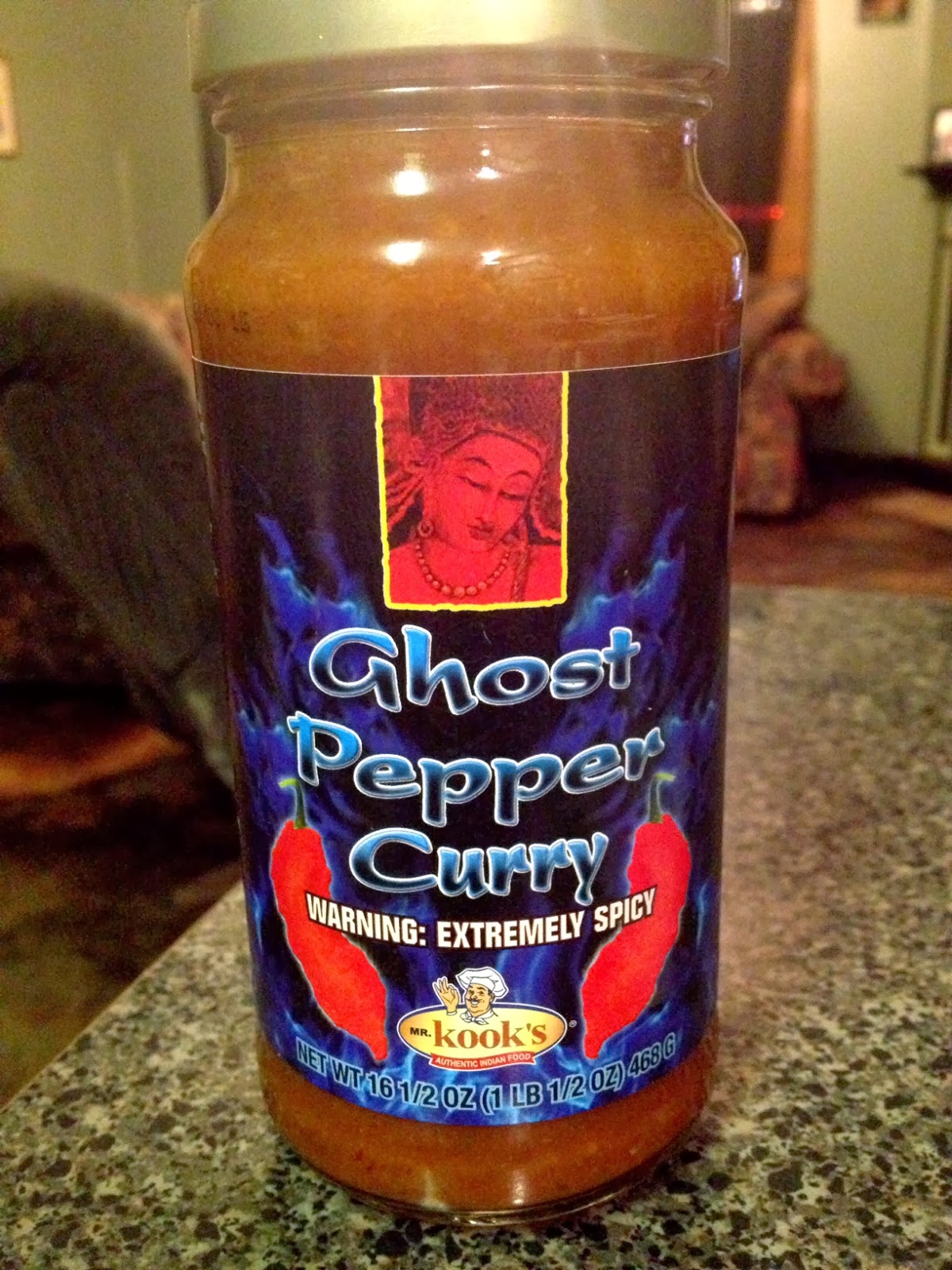 See that little warning label. They weren't kidding. I bought this awhile back because Paul LOVES hot peppers. We grow ghost peppers at the house, as well as habaneros and other hot varieties. Paul's always convincing people to take his "pepper challenges," in which some poor soul dares to eat an entire raw ghostie or an even hotter Naga Viper. And though I'm not dumb enough to take that challenge, I do love cooking with hot, hot peppers. And I used to think warning labels on spicy foods were for pansies. But this sauce changed that attitude.

Anyway, I sauteed some potatoes, carrots, onions, garlic, and peas in the LouAna oil, threw in some Beyond Meat chicken, and poured the entire jar of ghost pepper curry sauce into the skillet. Oops. Big mistake. Paul came home from work, and since this was a hot pepper dish, he agreed to have a real sit-down dinner with me (we rarely ever eat together at home). I presented this — Ghost Pepper "Chicken" Curry Over Red Rice. 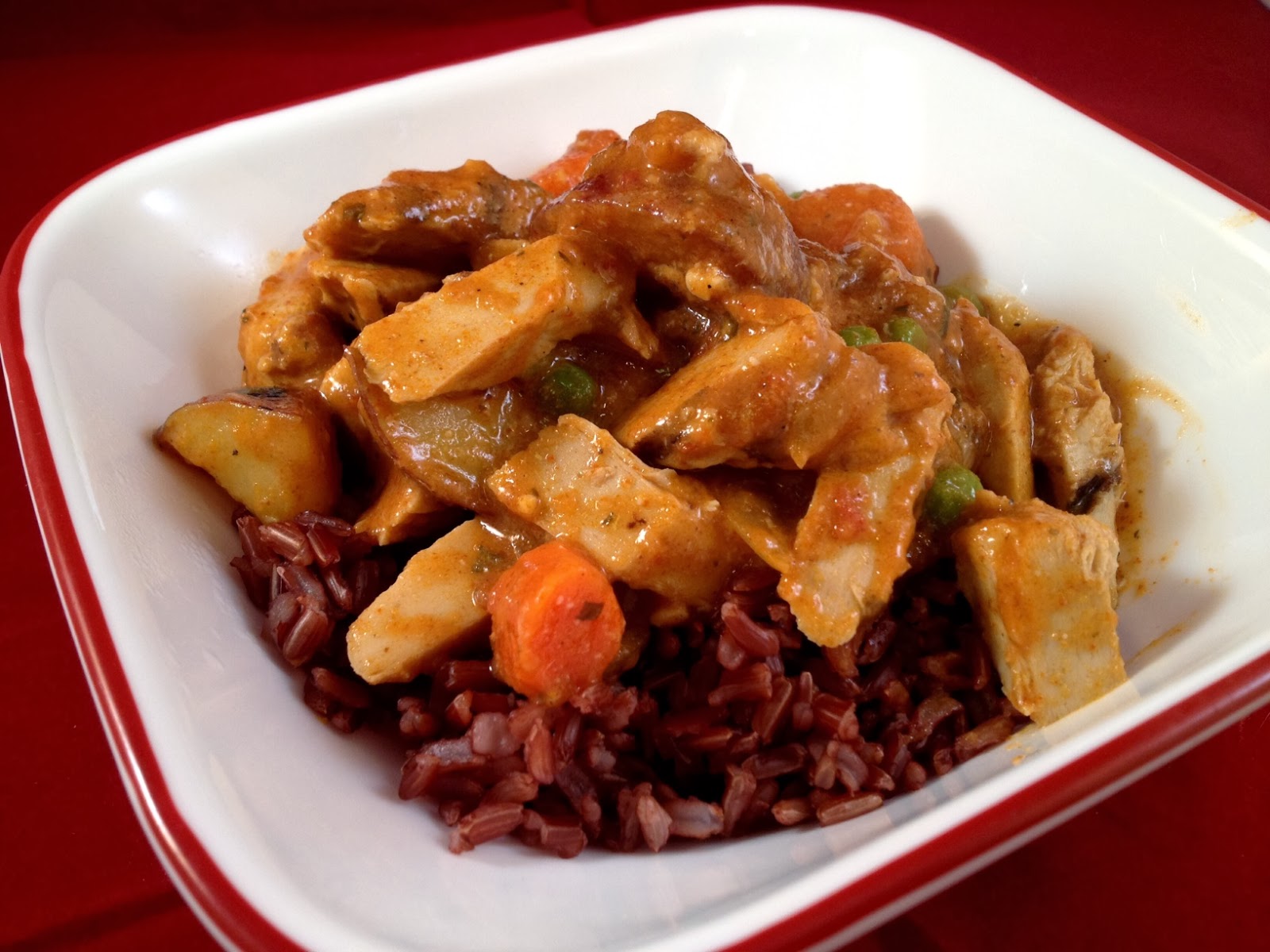 Paul took two bites and declared it too hot to eat. He was right. But dammit, I spent a lot of time chopping those veggies and cooking everything. And the Beyond Meat isn't cheap. I wasn't about to let my bowl go to waste. So I suffered through it. My mouth was on fire, but I ate every bite, only stopping to wipe my runny nose and chug water and coconut milk to ease the pain. Paul even made a video of my misery and posted it on his Facebook page. Ass.

Anyway, the curry had a great flavor, but it was too hot to enjoy. And the veggies sauteed in coconut oil were fantastic before I dumped the sauce in. I like using the refined coconut oil for stuff like this because it doesn't have a coconut taste at all. But you still get the great health benefits. Coconut oil can positively affect hormones for thyroid and blood-sugar control, and it can help increase digestion. It's also amazing on your skin! I sometimes use coconut oil instead of lotion or moisturizer. Oh, and it's the best oil for popping popcorn! That's what I always use.

As for that curry, well, you know me. I can't stand to waste food. So I poured the remaining chicken curry into a colander and rinsed away the ghost pepper sauce. Then I made a new sauce using the coconut oil and coconut milk thickened with flour and seasoned with curry powder, garlic powder, and shoyu. I poured the washed veggies into the new sauce and let it heat through. Saved! Coconut oil saves the day! The new curry still retains a tad bit of spice from the old sauce. I guess those ghost peppers marinated into the food. But I think the spice level is totally doable now. 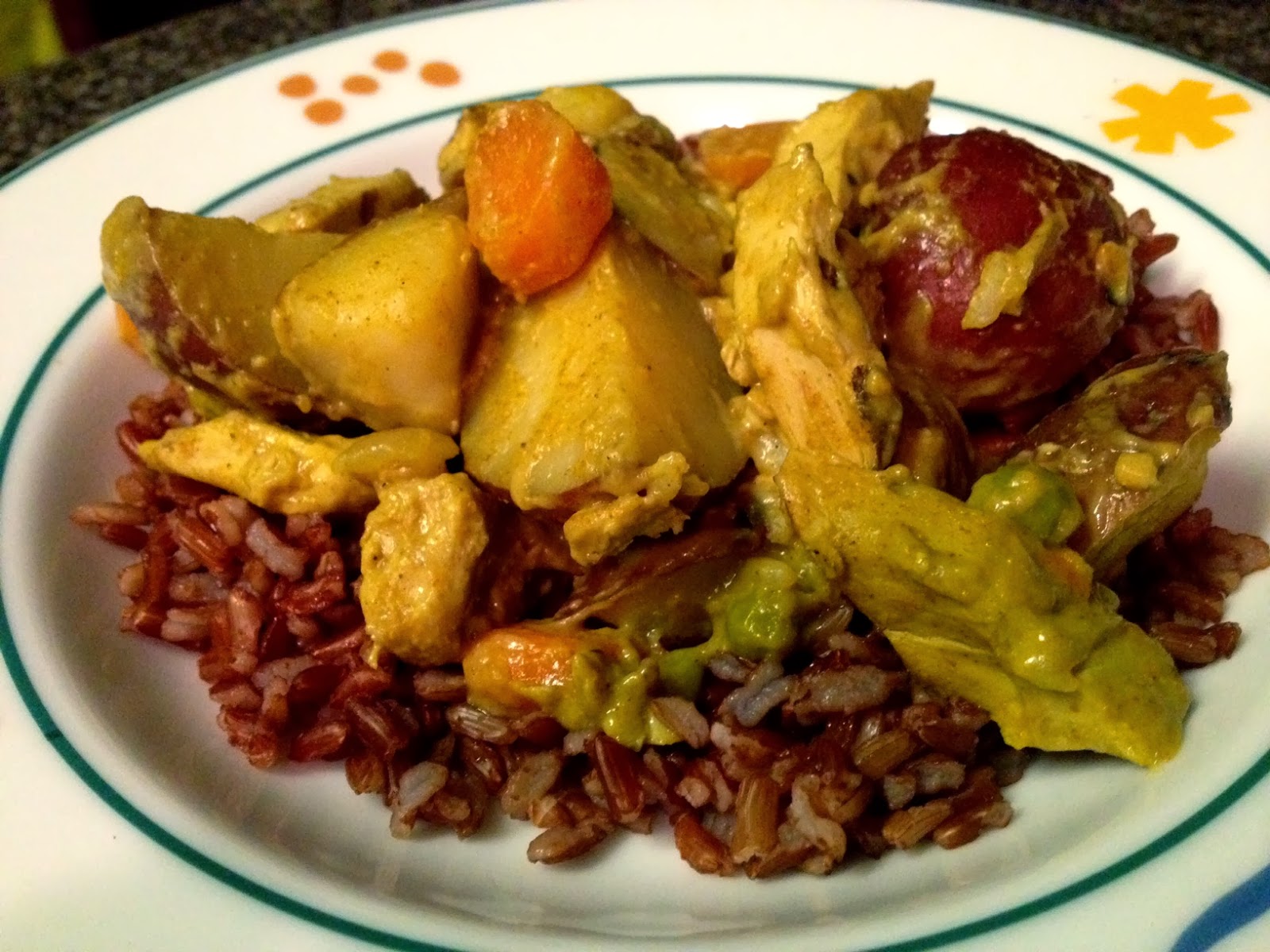 Red rice? Sounds good- I need to investigate further. Also, holla to not wasting food! If it can be drowned in ketchup, we eat it, yo.

I finished up my 21 day Crazy Sexy Cleanse last night! Thanks so much for inspiring me, I was in such a funk eating way too much vegan junk. It was actually not too painful of a challenge. I even decided to keep up the main tenets until Saturday when my husband and I are going to get Blackbird pizza in Philly and go to Baby's which has several kinds of vegan ice cream. I did have a cup of black tea this am which is way better than herbal tea.

Overall I feel way better and my whole family has a terrible cold and I am just a little bit sniffly. I think it was all that healthy food that somehow protected me!

I also plan to leave desserts to special occasions. This is how it was as a kid and I guess the freedom of being an adult led to me having dessert every night! This is dangerous because I do have a sweet tooth. I actually don't feel too attached to desserts anymore and now know I can indulge if we are out or it is a special occasion with no problem whatsoever. So excited. Thanks so much to you! Now I can make every recipe in your cookbook too:). Last time I had to suffer through making it but not being able to eat any! No fun. Not this time:).

I did that once too a few years ago making something so spicy it was inedible. I made sloppy janes and used this chipotle pepper powder that was new to me, a heapimg 2 tbsp! The food burned my tongue off! I ended up adding boca crumbles to mellow it out but it was still too damn hot. I also ate the whole thing since I can't waste food either. Good save!

I hate to waste food too, but I couldn't have eaten anything that hot. You're tough!

Kathleen, congrats!!!! So glad you made it through! Don't you feel great? I loved the way I felt after the cleanse, and other than a few super cheat weekend days (like this Saturday when I had nothing but ramen noodles all day, followed by beer at night), I've mostly kept up my healthy eating goals.

Also, you left a comment a few days ago about my blogroll needing an update. And you're right! But the reason I leave some of those old blogs there is for my own reference. Some belong old blog friends who stopped blogging, but I like to go back and look at their old posts from time to time. Memories. But if you stick the blogs at the top my roll, those are all up-to-date. They list in order of how recent something has been posted on them.

I'm glad you were able to save the curry in the end, but that video Paul posted was funny as shit. You looked like you were about to cry.

Yeeeahhh, I'm one of those guilty-bloggers-that's-no-longer-blogging, but still exists in your list. SORRY!! I keep thinking I'm going to pick it back up, but haven't yet. Not having a laptop these days makes it a lot harder.

So glad you were able to save your veggies from the scary heat! I don't know how you choked all of that down. I like spicy things, but not that spicy! But, that video was really funny...hehehe.

Hey Bianca! I just wanted to let you know you won my Giveaway for the Alter Eco prize pack!! Congrats! Please e-mail me (address is in today's blog post) with your mailing address so I can have them send your goodies :) Yay!

What does it say about me that I just bookmarked the web site to buy that curry? hahaha CHALLENGE ACCEPTED!

And fantastic idea about rinsing the Beyond Meat and reusing. Exactly what I would do.