Before I get into tonight's post, I have an announcement! I'll be competing with a vegan gumbo z'herbes in the annual Tennessee Equality Project Mardi Gras Party & Gumbo Contest again this year. It's Sunday, February 23rd at 4:30 p.m. at Bridges. And it's a fund-raiser for TEP, which lobbies against anti-LGBT legislation and promotes equality in Tennessee. I will likely be the only vegan gumbo competing with lots of meat, as was the case last year. So if you're local, come on down and support TEP. And most importantly, vote for my gumbo!

Last month, I blogged about how, due to scheduling conflicts, our January Vegan Drinks event had low attendance. About four of us gathered at Jamaican restaurant Evelyn & Olive last month, but their food and cocktails are so good that I just had to hold it there again in February. I wanted more people to have a chance to try this place.

So we met at Evelyn & Olive again last night for our monthly Vegan Drinks meetup. I started with an Island Lemonade (vodka, gin, rum, tequila, and Jamaican lemonade). I usually choose red wine or beer over fruity cocktails, but the sweet drinks at this restaurant are so good and some are very strong. This is one of the strongest, so you're sure to get a nice buzz off one drink. Plus, this tastes like a margarita made with lemonade! 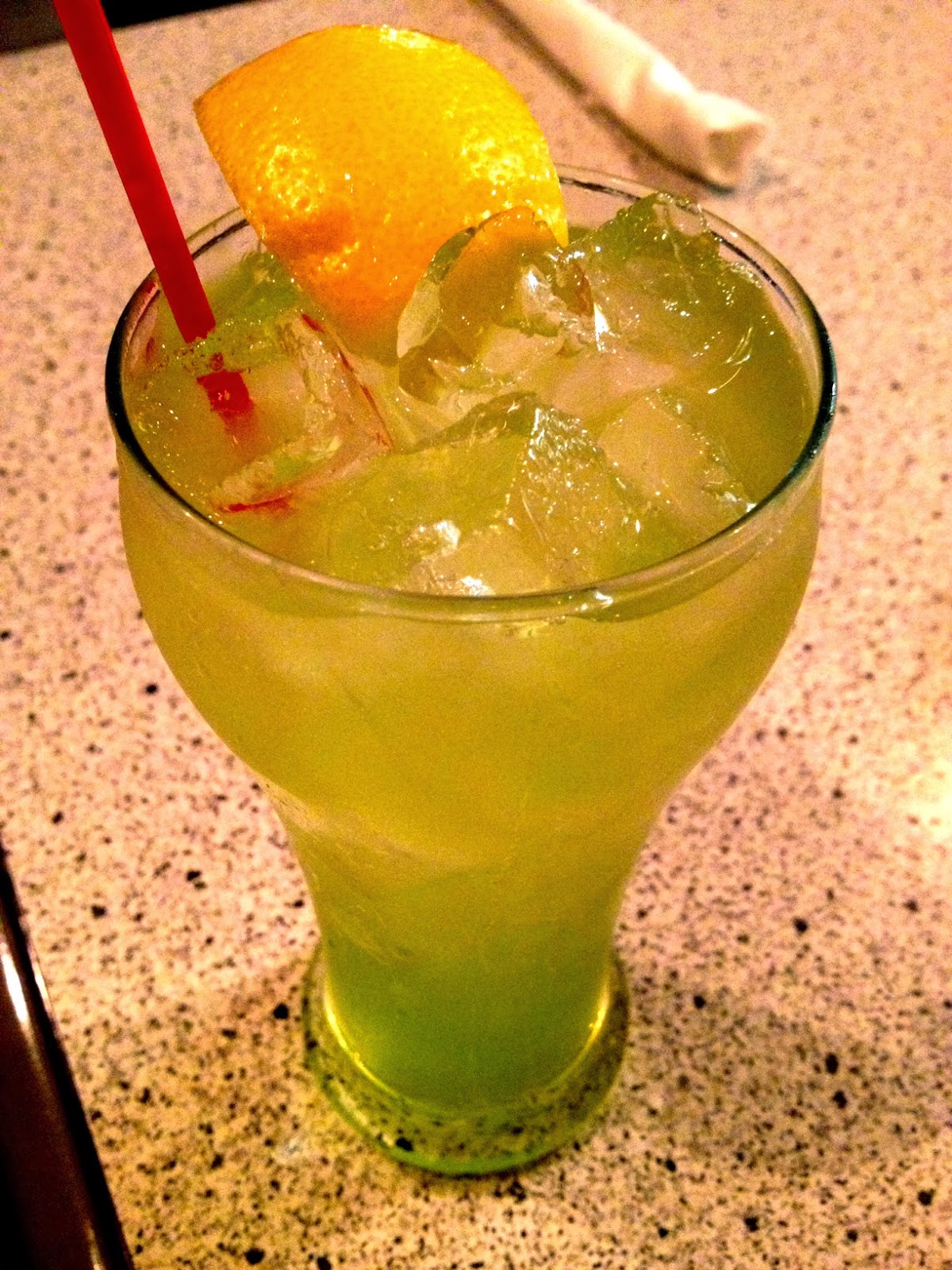 I ordered the Chipotle Black Bean Burger with Mango BBQ Sauce and chips for dinner. It was delicious, especially that sauce! But I'm afraid it may not have been vegan. Morningstar Farms makes a chipotle black bean patty that looks a lot like this one, and it contains eggs. I'd assumed it was homemade, and the server thought it was vegan. So I'm not sure. But just sayin', in case you go in there and order it, you might wanna double-check. 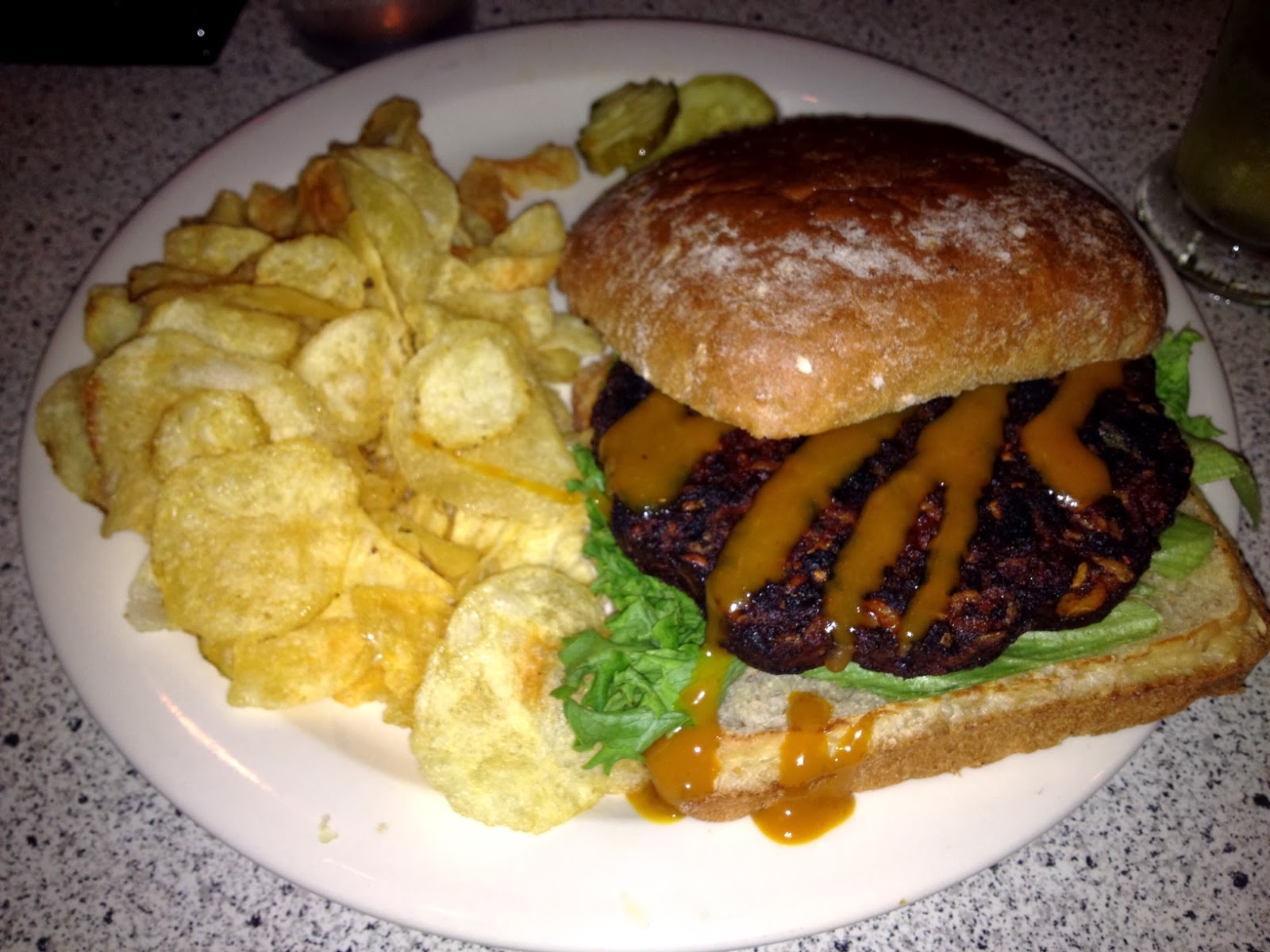 I don't worry too much when I make slip-ups in restaurants though. You live and you learn, right? And Evelyn & Olive has lots of other definitely vegan options! I always get the Black Bean Tacos, and those are most certainly vegan. 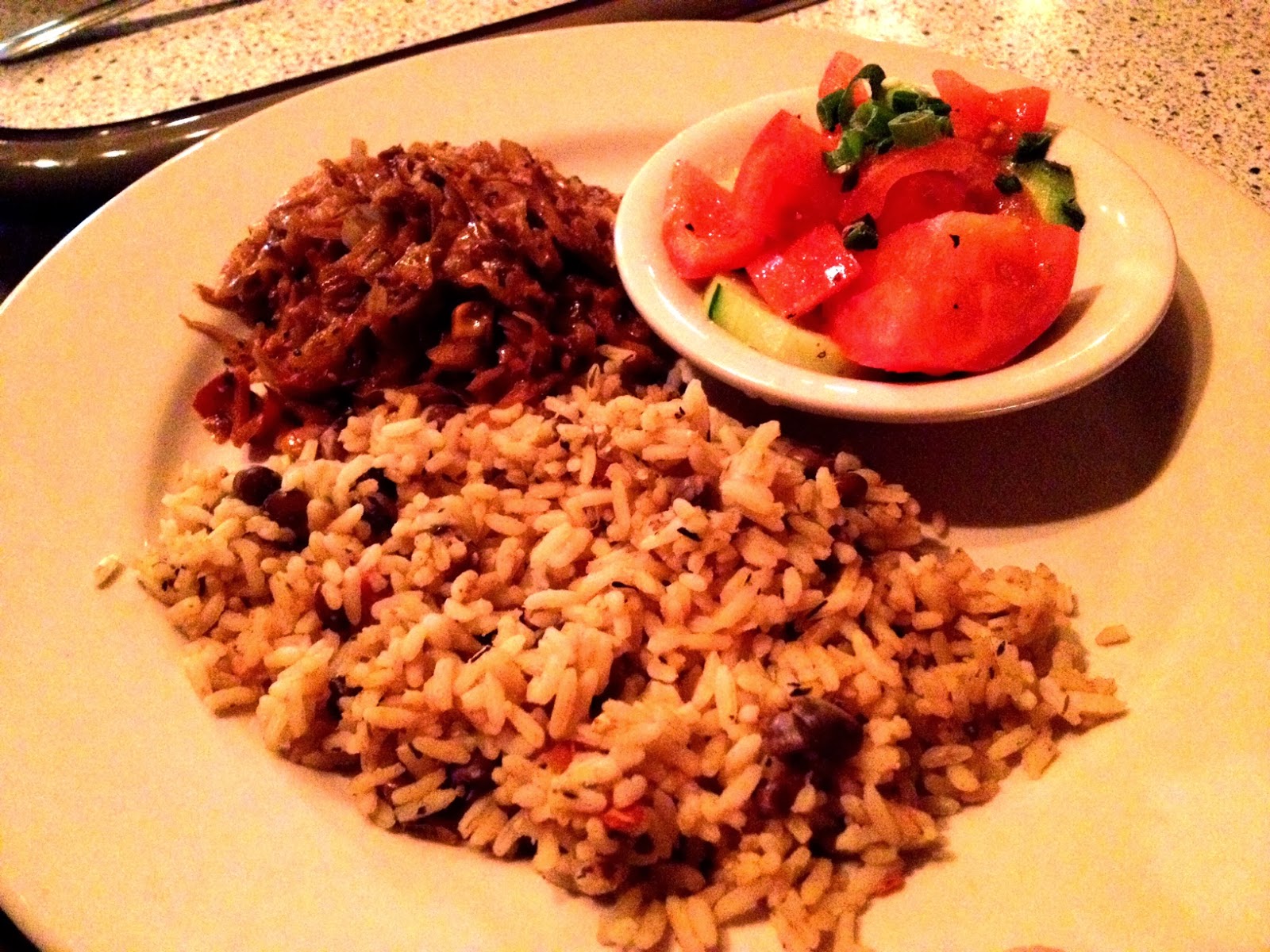 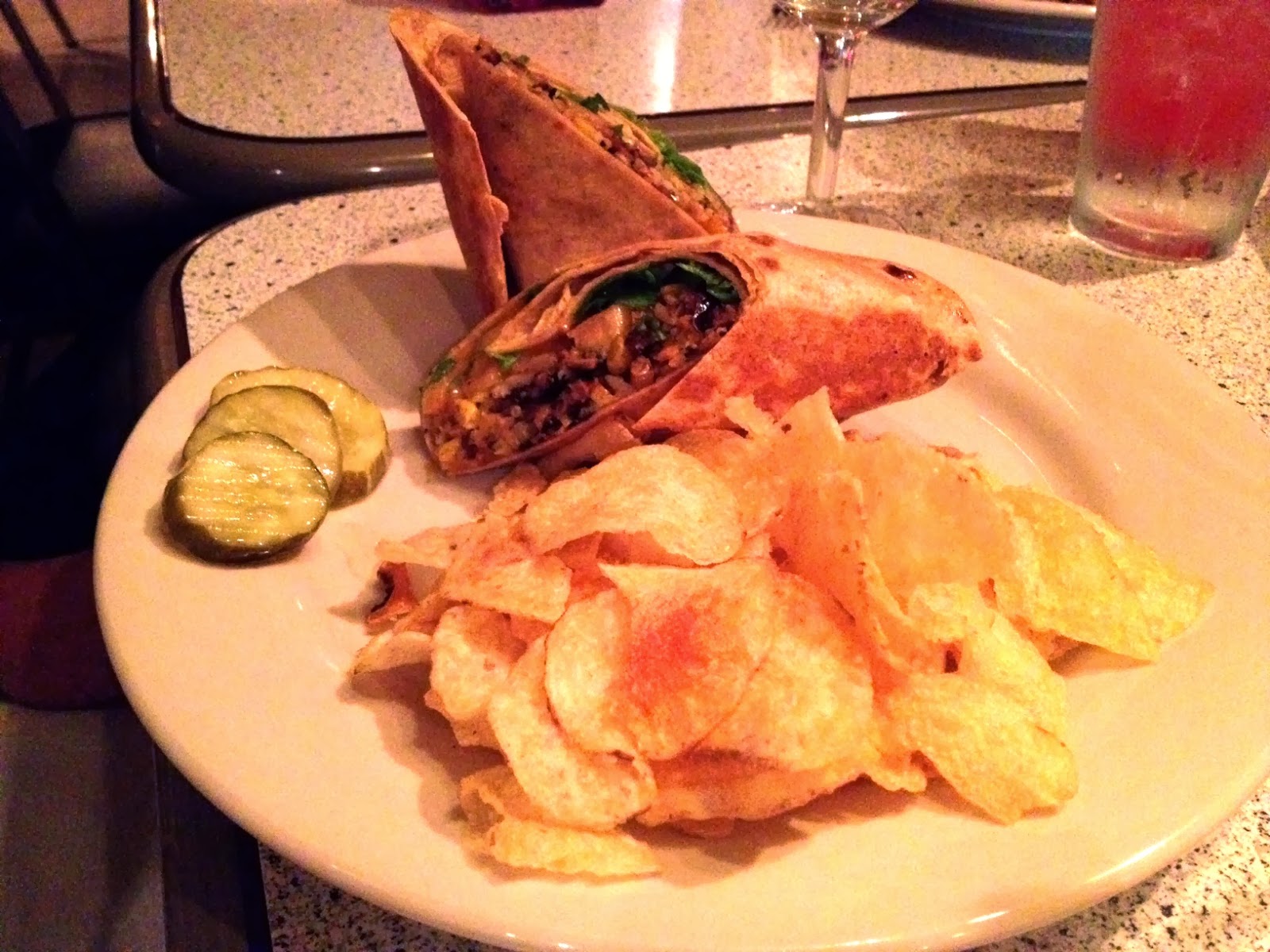 And those cocktails are vegan too! Cassi got the Rum Ting Tini and Nathan got the Jamaican Rum Punch. 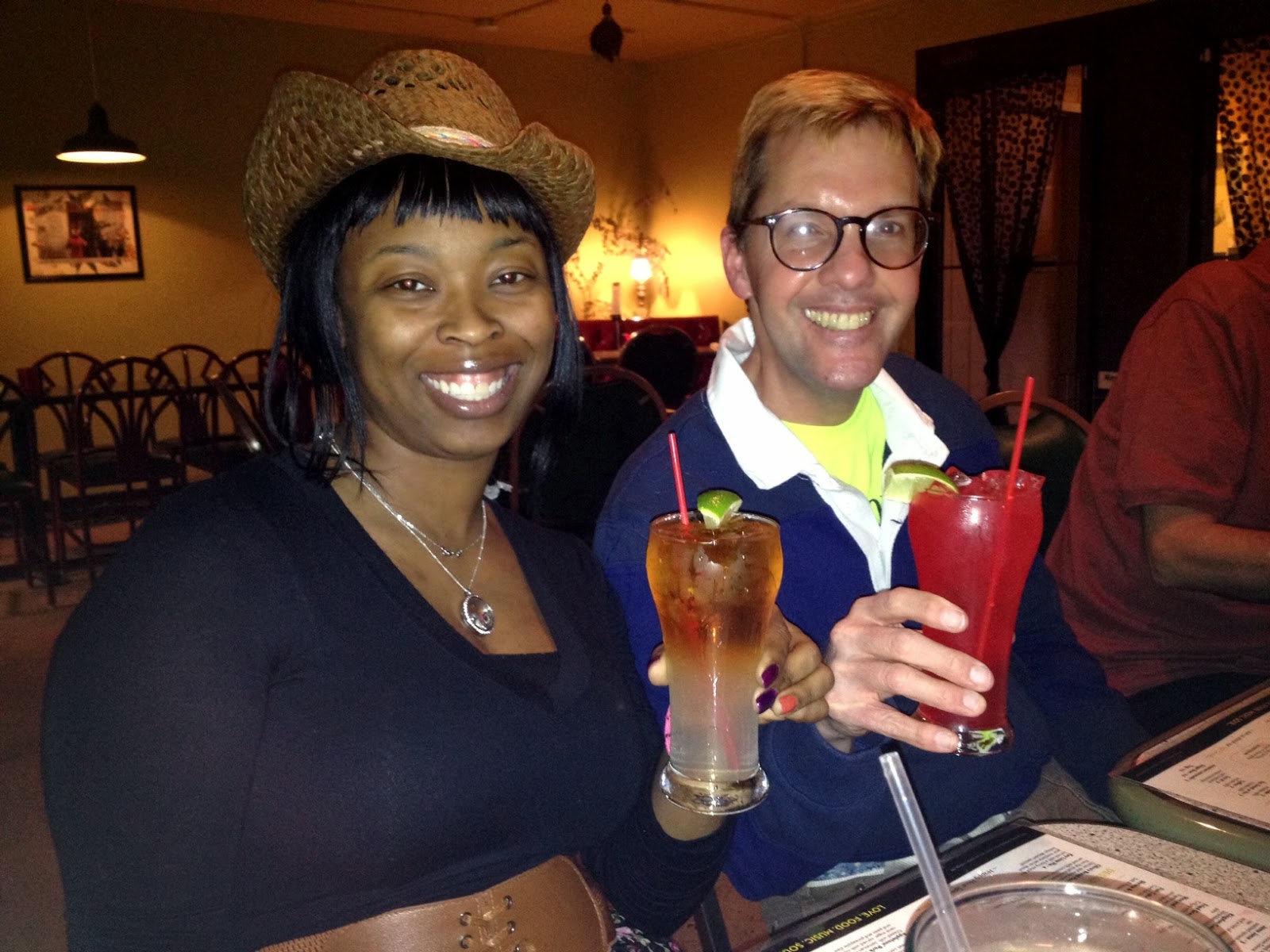 Pam, who had I the pleasure of meeting in person for the first time (we've been Facebook friends for awhile now), showed up a little late, and she had the Mango Rum Punch. 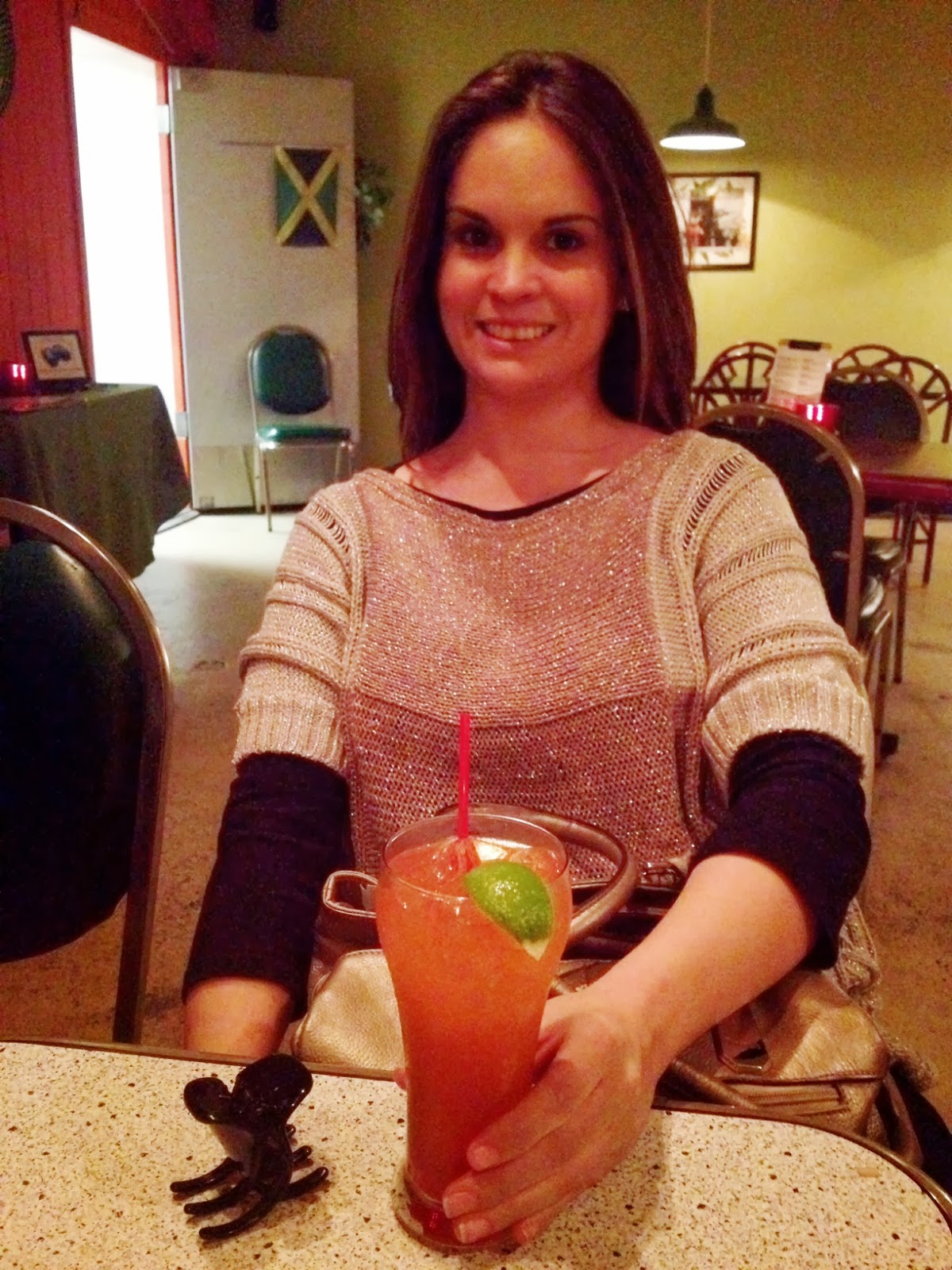 And since I wanted to stay and chat with Pam awhile (and I'd thought I was done drinking), she bought me a beer. I went with a Sam Adams Boston Lager because you really can't go wrong there. 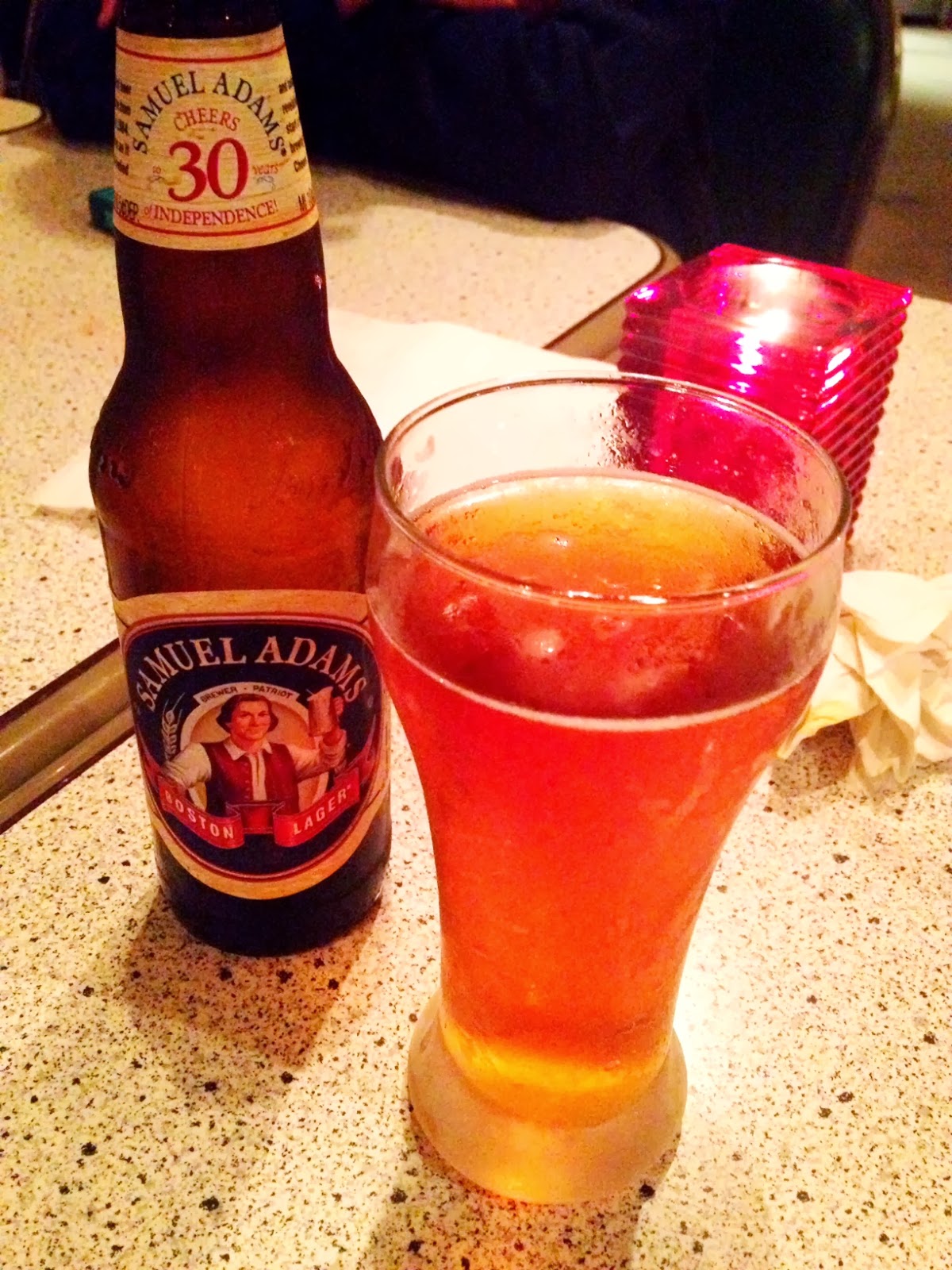 If you're local, please join us next time! We haven't picked a March location yet, but join our Memphis Vegan Drinks Facebook page and you'll be the first to know!
Posted by Bianca at 9:55 PM

I could go for an Island Lemonade right about now! That burger looks ace as well.

Oh man, I hate when I eat something and then I'm like "Wait, was that vegan?". But you're right, slip-ups happen (especially in restaurants, and extra-especially when the servers aren't sure what is or isn't vegan), and you can't be hard on yourself. We're doing the best we can! :)

Wow, that drink sounds suuuuper boozy! I'd probably fall down if I drank it!