Sweets for Your Sweet

If you'd asked me my favorite candy in my pregan days, I'd have no doubt said "gummy bears." I freakin' loved gummy bears. And gummy worms. And gummy peach rings. And giant gummy alligators. So imagine how very sad I was when little vegan me learned that most gummy candy is made with gelatin, and gelatin is made from collagen extracted from animal skin, bones, and connective tissues. Gross!

I soon learned that Sour Patch Kids were vegan though, and that gave me some relief. But Sour Patch Kids are loaded with artificial colors and corn syrup. It wasn't until I discovered Surf Sweets that I could snack on gummys guilt-free. Surf Sweets Fruity Bears are vegan, sweetened with organic fruit juice, fortified with vitamin C, and they're made with natural colors and flavors. I've been enjoying these for years.

But now, just in time for Valentine's Day, Surf Sweets has come out with Organic Fruity Hearts! They sent me a care package to sample. 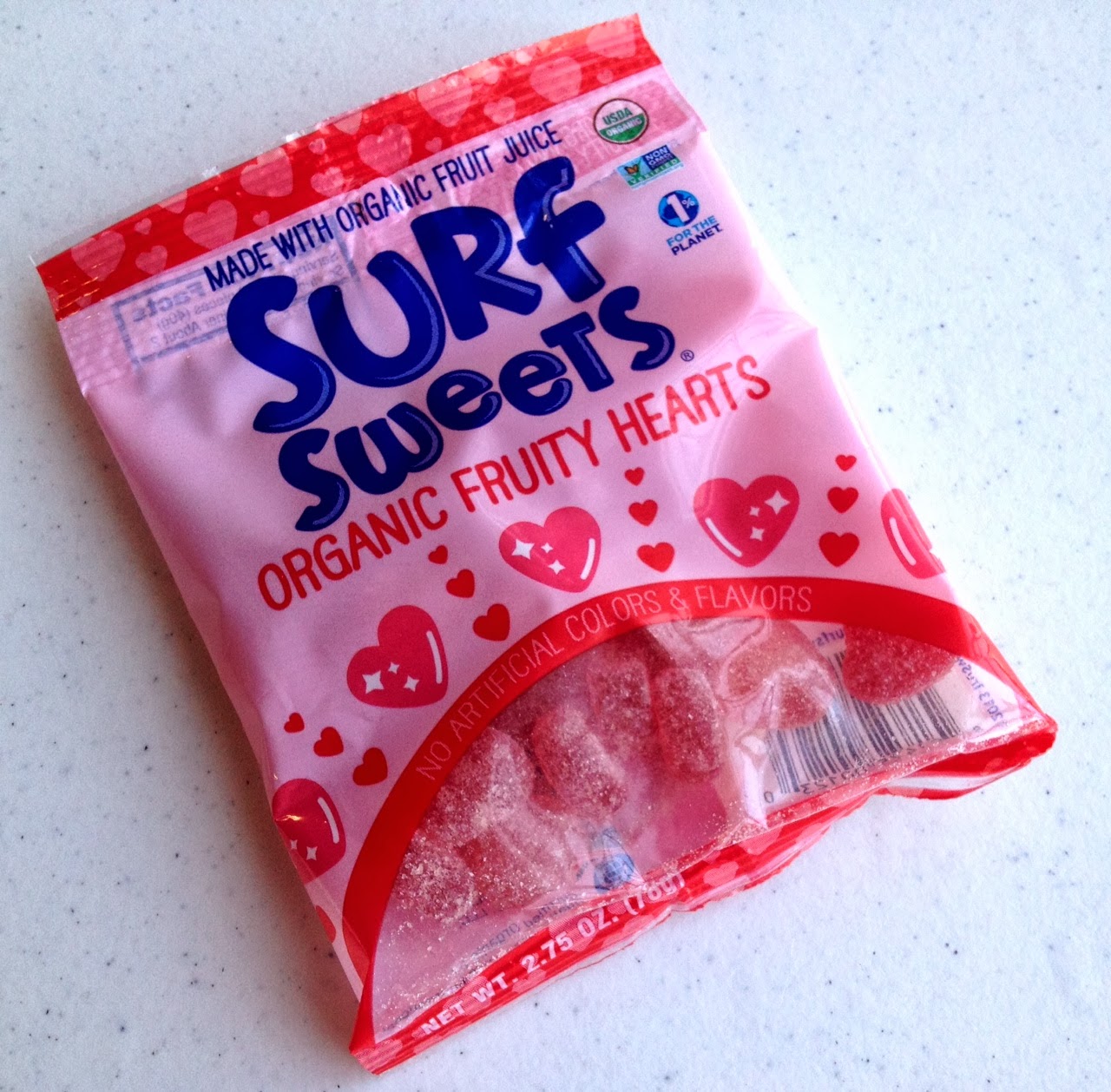 These organic cane sugar-coated gummy hearts are a mix of cherry and watermelon, which just happen to be my two favorite gummy flavors! Plus, they're kind of adorable. I opened these at work and shared some with my non-vegan desk neighbor Toby. And he declared, "Man, these are damn good." 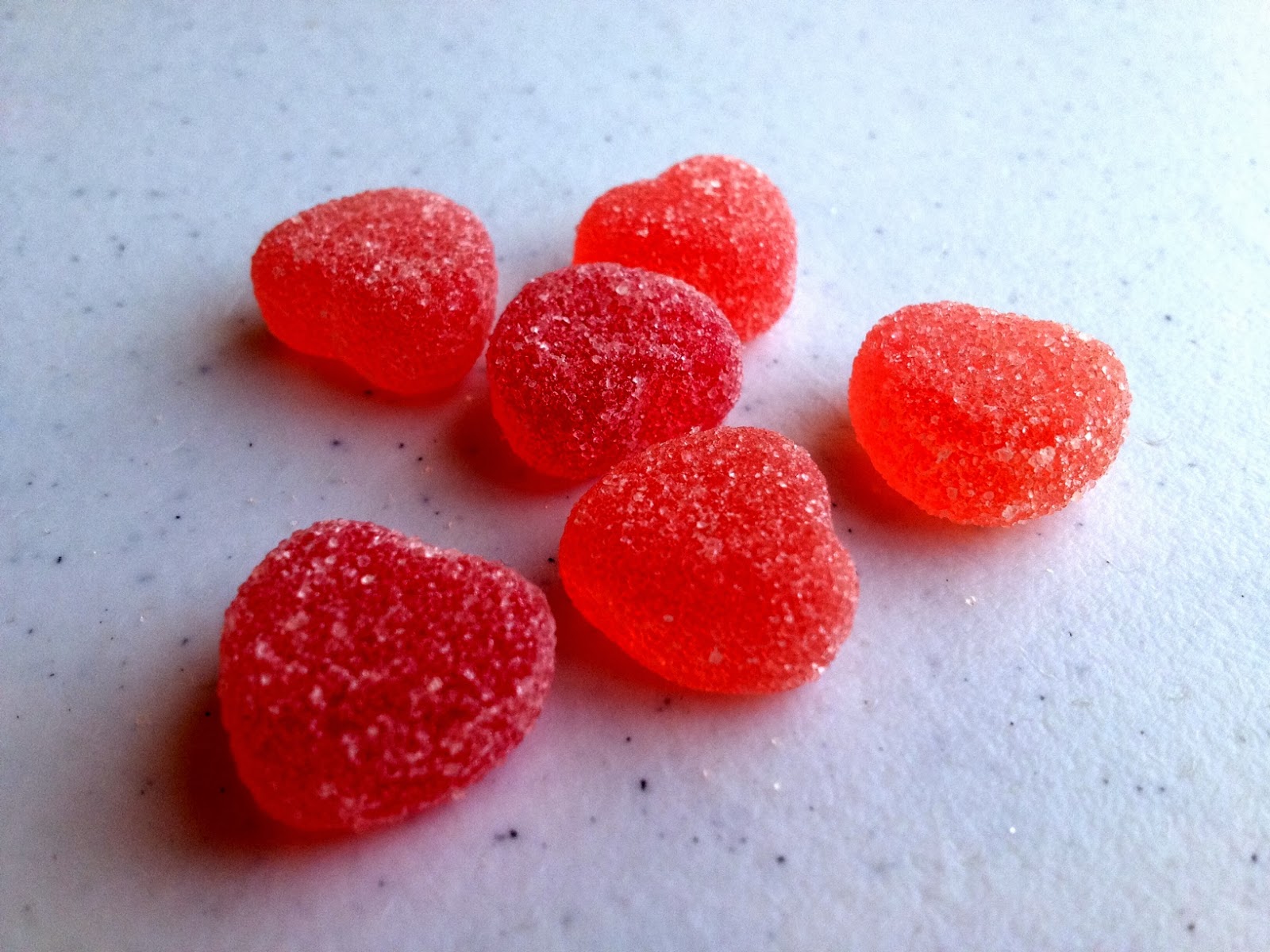 Although I discovered the Surf Sweets bears could ease my gummy cravings years ago, there is one vegan candy that I've never found a replacement for — Starburst! Those contain gelatin too. But TruJoy Sweets, the same company that makes Surf Sweets, also makes vegan Organic Original Fruit Chews. 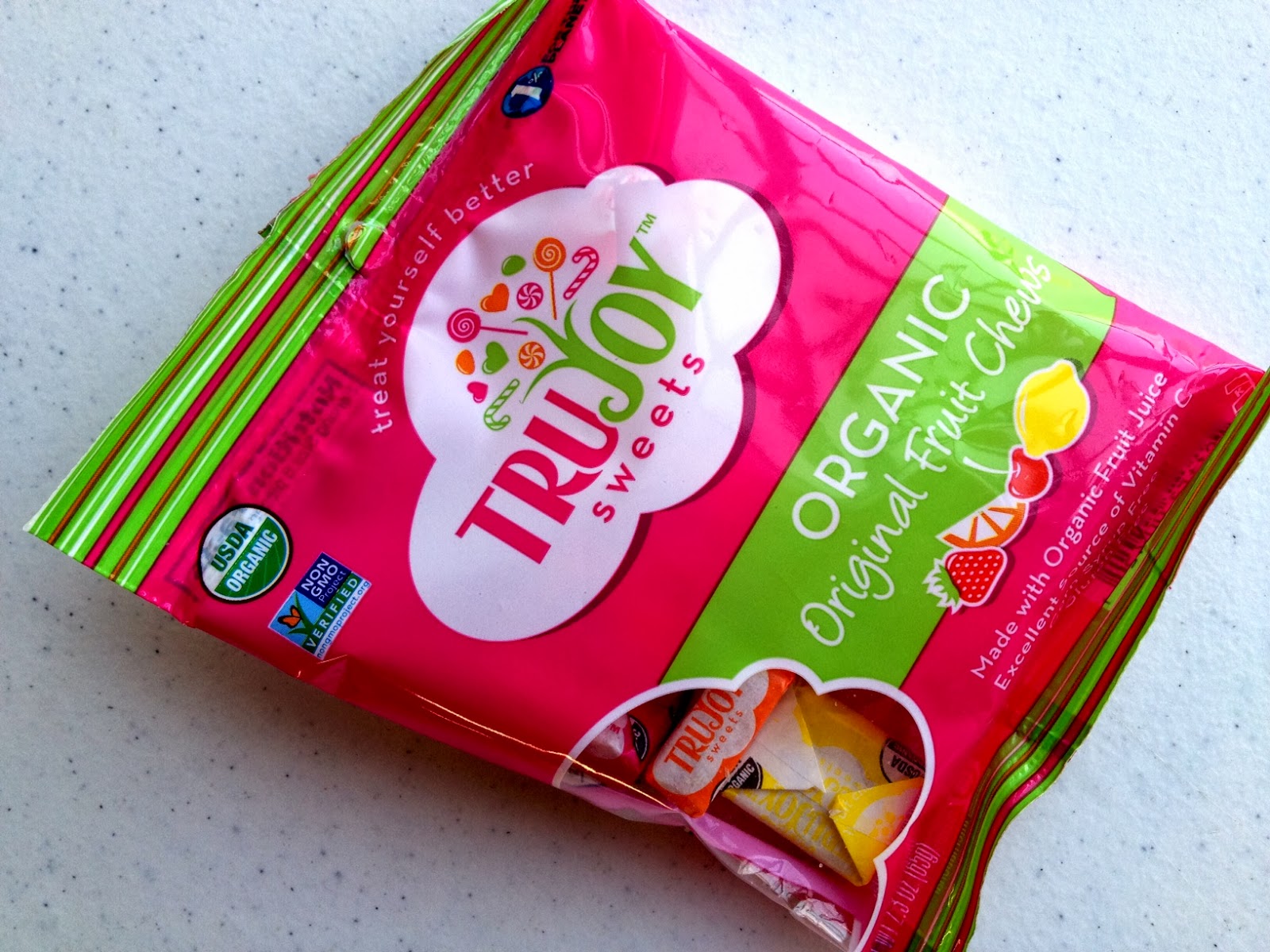 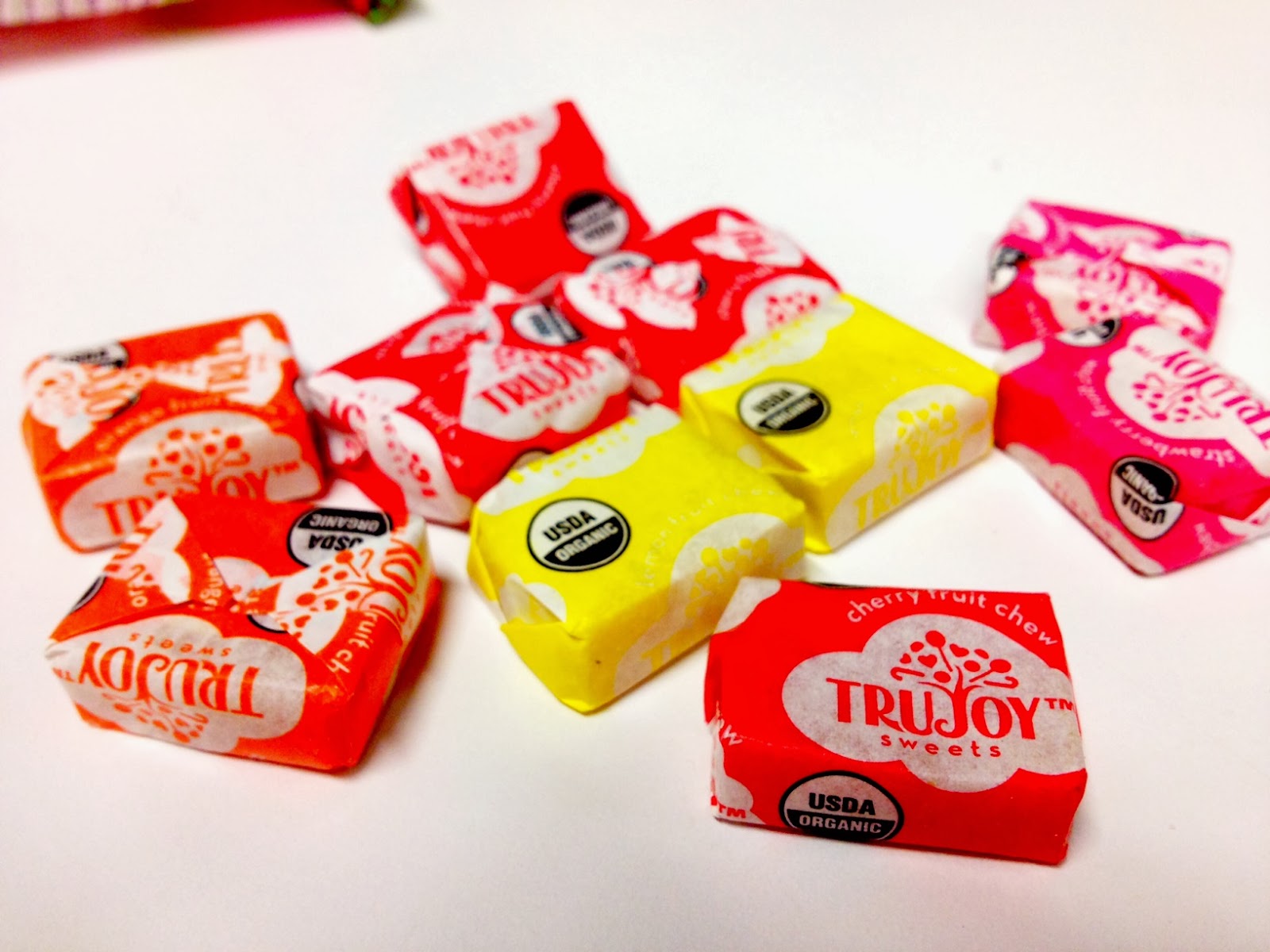 These are sweetened with fruit juice, contain vitamin C, and they're corn syrup-free. Score. These are delightfully chewy, and they come in strawberry, cherry, orange, and lemon flavors.

They also sent me some little single-serve bags of the original Surf Sweets Fruity Bears and the Surf Sweets Sour Berry Bears. 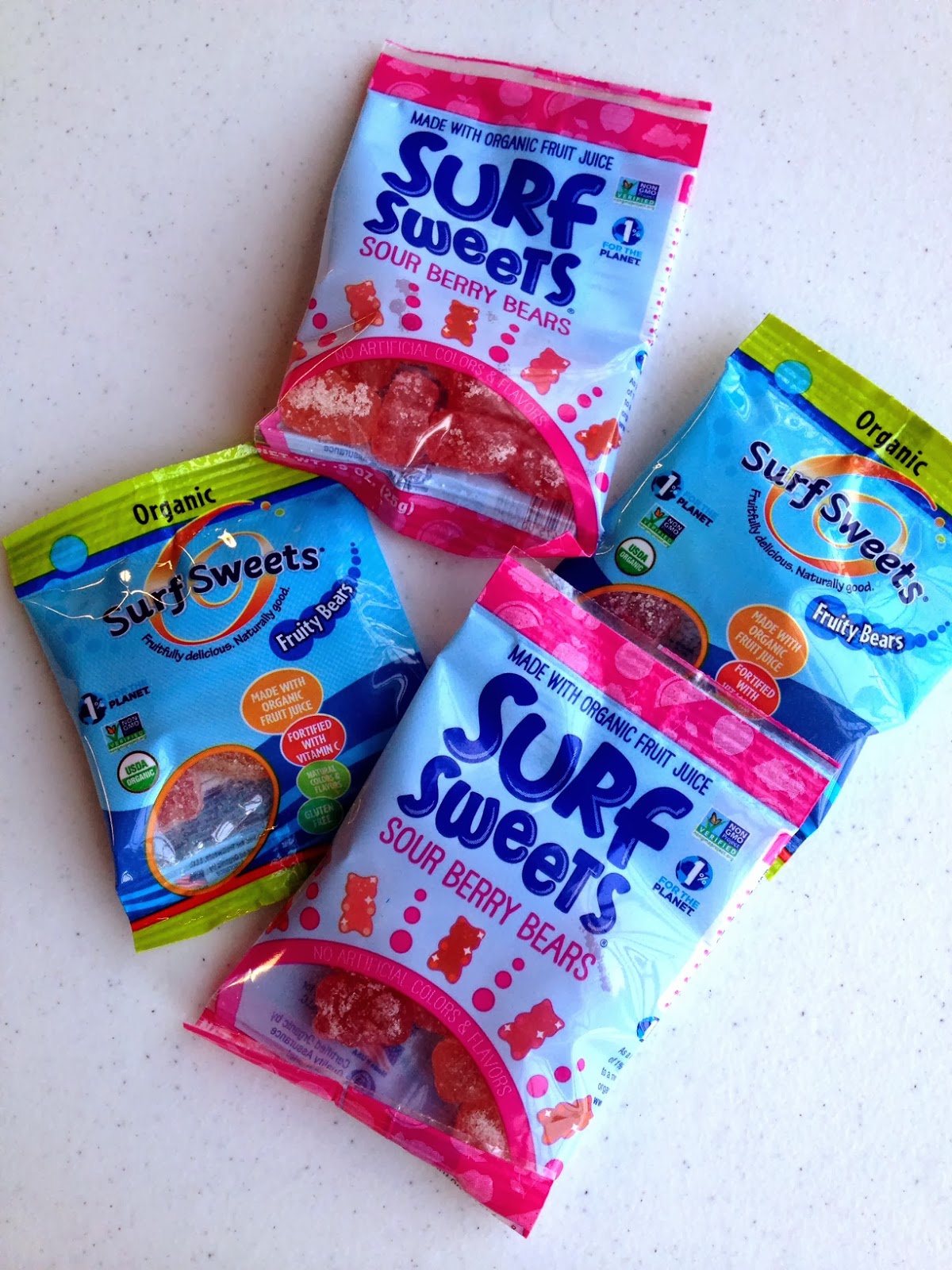 For those who love Sour Patch Kids but don't love all the artificial stuff and nasty ingredients, these Berry Bears really hit the spot. They're sweet and sour at the same time, and they come in black raspberry, sour cherry, and raspberry flavors.

One thing to watch out for: Surf Sweets also makes a few varieties of NON-VEGAN gummies. The above-mentioned flavors are all vegan, but be sure and check the label of any other Surf Sweets products.
Posted by Bianca at 10:24 PM

i tried the tru-joy, they are good!

recently i tried the peach rings from surf-sweet. omg! they were so sweet! really good but really sweet! i have to scope out the sour bears!

I've tried the gummies and they are really good! The Starburst replacement is REALLY exciting news! I've never heard of these but I'm going to have to watch out for them! Hopefully I'll see them in stores soon :)

Yay!! I need to get some of these!