I've been so busy lately. October is my crazy month. It's a fun kind of crazy — birthdays, Halloween parties, fall festivals, haunted houses, and other spooky social obligations. I'm not sure how it's possible, but this time of year is far busier for me than the hectic time around the winter holidays.

And that means that I've not had as much time to cook from other books or work on my own cookbook or even catch up on all my friends' vegan blogs. But a girl still has to eat, even if it's quick meals, takeout, or grabbing dinner at a friend's house (I'm lucky to have amazing vegan cooks for friends!!). Here's a little hodge-podge of stuff I've been eating lately.

A couple weeks back, I had dinner at Stephanie's house (Ms. Poopie Bitch, if you're nasty). She made a perfect Biscuit Pot Pie in the biggest cast iron skillet I've ever seen. 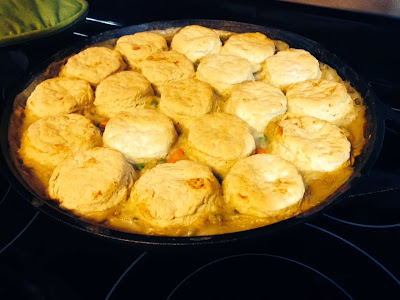 I'm not sure everything that was in this, but I remember potatoes, carrots, and peas. Wonderful fall weather meal. 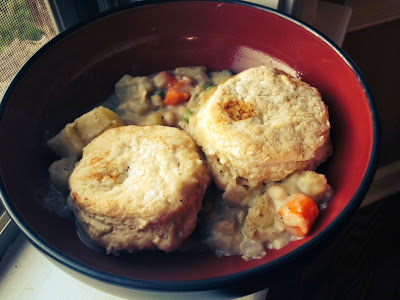 Speaking of Poopie Bitch, I also nabbed one of the Cinnamon Rolls she made for my friend Cassi's birthday slumber party a couple weekends back. Stephanie made the soft, sweet, sticky buns for us to eat when we awoke the next day. But I left Cassi's around 6 a.m. in favor of my own bed. I came back for a cinnamon roll later in the day and saved it for a weekday breakfast with fruit, almond milk, iced green tea, and my morning news on the laptop. 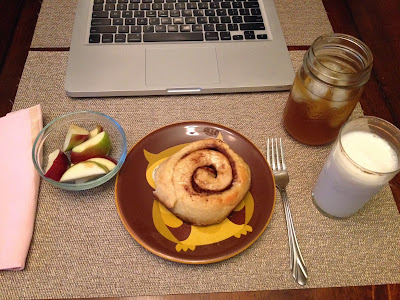 And while we're on the subject of desserts, check out this vegan Jelly-Filled Doughnut! Imagine Vegan Cafe has a rotating cast of desserts, so they don't have doughnuts all the time. But when they do, I'm on it! Nothing in the world beats a vegan doughnut. Nothing. 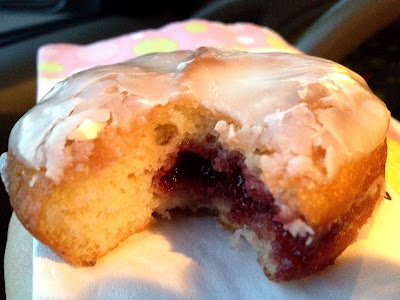 You know what goes great with doughnuts? Coffee! Specifically Turkish (or Arabic) Coffee!! 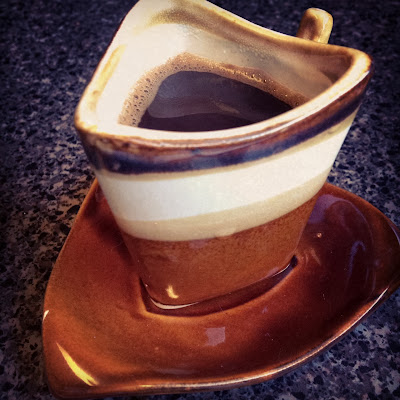 Leslie got me these adorable tiny coffee mugs specially designed for serving Turkish Coffee for my birthday. If you've never had Turkish coffee, you simply must try it. It's a strong, almost espresso-like coffee where the powder-fine grounds are actually boiled into water until they mostly dissolve. The result is a thicker, creamier coffee. If you order it in a Middle Eastern restaurant, they often season the coffee with cardamom, which gives it a fruity flavor. I bought the Arabic coffee grounds with cardamom already mixed in. And I bought the special pot to brew it in.

Finally, I've been eating a ton of Breakfast Miso lately. 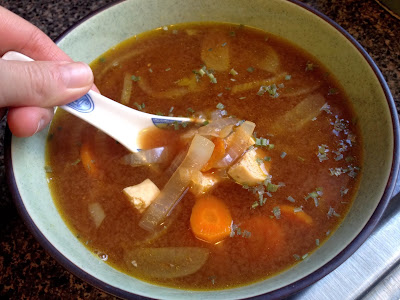 After I read a few years back that miso soup for breakfast was common in Japan, I had all the excuse I need to enjoy this savory broth in the a.m. I always add tofu, carrots, and onions. But no seaweed. Breakfast is just too early for seaweed. When I have miso in the morning, I usually have a small bowl of brown rice with shoyu on the side.
Posted by Bianca at 11:18 PM

YUM! I love these "look what I ate posts" although they do make me drool....

Holy biscuits! The picture of Stephanie's massive Biscuit Pot Pie popped up in my reader and broke my brain. My brain will think of nothing but biscuit pot pie now until I make one of my own.

Love the Turkish coffee cup. It's so different! (and cute!)

Biscuits and cinnamon rolls and doughnuts, OH MY!! YUMMM! I want all of these things. I have to be sure to pick up some sweet treats at Imagine next time we come to visit!

All my favorite foods : ) I think you and I are food soulmates--I live for vegan doughnuts, ramen, and savory breakfasts, too.

(BTW, I can't remember if you went to Revolution when you were in Atlanta for VegFest, but they have the BEST vegan doughnuts--way better than VooDoo in Portland. I miss them so much!)

I've been eating a lot of Miso for dinner lately - I really ought to try it for breakfast! Maybe hold the seaweed, yes.

Your Turkish coffee mug is beautiful! I've always wanted to try miso in the morning, its just hard for me to do savory things in the morning.

I know what you mean about vegan donuts... I didn't love non-vegan donuts much, but I am head over heels for a vegan jelly-filled.

Stephanie should share her recipe for the Biscuit Pot Pie with your readers! :)