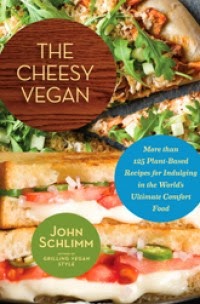 Before I went vegan, cheese was probably my second favorite food (after ramen, of course). I was never a fancy cheese girl. No, I don't think I've ever tried roquefort, cotija, or taleggio. Plain old cheddar, monterey jack, or mozzarella were more my speed.

And like with most vegans, giving up cheese was the hardest part for me. But once I learned that could make my own vegan cheese (these were the pre-Daiya days), I knew veganism was possible for me. The very idea of making my own cheese was so exciting. In fact, the first vegan cheese I tried wasn't Vegan Rella but a homemade block made with agar. It wasn't the best recipe, but it was good enough to convince me to give up dairy cheese once and for all.

Since those dark days, Daiya and some other tasty artisan vegan cheeses have hit the market. And there are a handful of amazing cookbooks devoted to teaching vegans to make their own cheese. One such book is John Schlimm's new volume, The Cheesy Vegan. This just might be my favorite cheese book yet!

The first chapter is filled with recipes to make your own cheeses — Swiss, feta, cheddar, mozzarella, wine cheese, American, blue cheese, etc. And the rest of the book contains recipes that use those cheeses in all sorts of ways. There's even an ENTIRE CHAPTER DEVOTED TO MAC & CHEESE!!! Yes, that alone makes this my favorite book. There's also a cheesecake chapter and a chapter on pairing the proper wine, beer, and other cocktails with the cheeses in the book.

I'm making a couple things from this book this week, so I'll show more tomorrow. But the first thing I tried was the seasonally appropriate Oktoberfest in a Bowl. 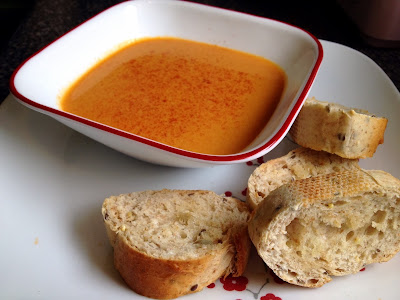 This is a beer cheese soup made with John's homemade vegan cheddar, beer (I used Heineken), and spices. It's served with toasted baguette slices for dipping. This was so comforting on a cold Friday night.

To make the soup, you can use storebought vegan cheddar or you can make your own using the recipe in the book. I made my own. The cashew-based cheddar gets its signature color from pimientos, and it's formed into a solid, sliceable block thanks to agar. Here's the Cheddar I made. 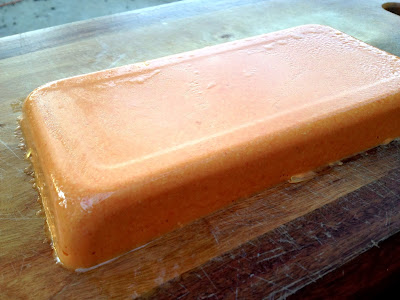 This was probably the most firm agar-based slicing cheese that I've ever made. It actually had the same texture as dairy cheddar. It melts beautifully, so I grated it before melting into the soup pot. 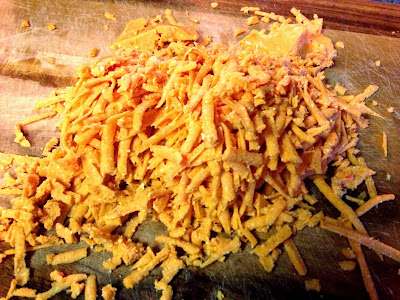 The only thing I would caution about this soup: Because the basis for the soup is an agar-based cheese, and agar firms up as it cools, you need to eat this soup quickly. My leftover soup completely firmed up into a sliceable block of beer cheese in the fridge overnight. But the cheese melts quickly when you re-heat. I actually grated the leftovers into a pot so they'd melt faster.

This is such an awesome book! If you miss cheese or you know someone going vegan who is having trouble giving up cheese, this book is the answer. Stop back tomorrow for a peek at another Cheesy Vegan dish (hint: it's from the mac & cheese chapter!).
Posted by Bianca at 10:00 PM

I look through this book every time it comes through work and I think that's a testament to its appeal: I'm not huge on fake cheeses but I'm still really intrigued and want to buy this... It looks a lot more approachable than mioko's cheese book.
The cheddar looks awesome shredded up.

I just ordered this off Amazon Friday, so I'll be excited to finally check it out and make some stuff.

That's actually pretty cool that it hardens back up like that... you could just shred the soup, and have beer cheese shreds!

Man, that looks good. Wile I love a cooking project, I've always been too intimidated to make vegan cheese. This might have inspired me to give it a try : ) I'll have to look for this book! Thanks!

I love mac n' cheese!! I have yet to try the vegan version though, but I'll definitely come back for the recipe. :)

There are a whole lot of vegan cheeses to choose from these days!

This is so legit. Thank you for sharing!

Aww, I fondly remember making recipes from the Uncheese Cookbook that took the shape of the Tupperware in which I molded them. The good ol' days. ;)