I am going so slow with this next cookbook project, I swear. I see other authors putting book after book after book out, and I don't understand how they do it. But anyway, I promise that I am working on it. Case in point: today's menu.

In case you haven't read, my next book will be a collection of veganized versions of foods that were popular throughout the decades of the 20th century. Today, I focused on the first decade — 1900-1910.

The Club Sandwich's history is kind of a mystery, but it supposedly originated on menus in men's clubs at the turn of the last century. The first mentions in print were in 1903 and 1906, according to the Food Timeline website. I made a vegan Club Sandwich using a homemade seitan ham, homemade tempeh bacon (both recipes will be in the book), vegan mayo, lettuce, and tomato. 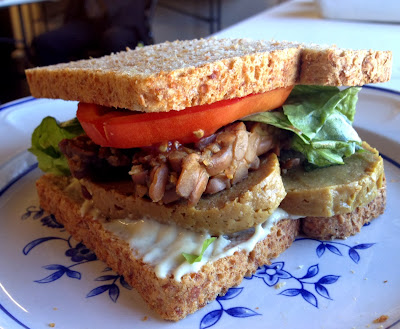 On the side, I made a Waldorf Salad. 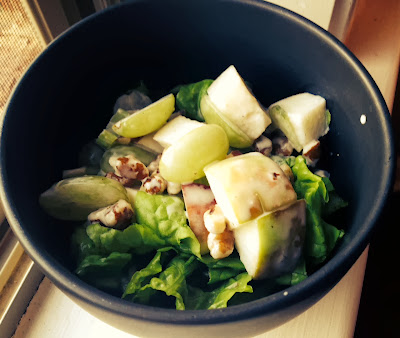 The waldorf salad was said to have been created in the late 1890s (which were awesomely referred to as the "Gay Nineties" back then!) at the Waldorf-Astoria Hotel in New York City. It's often made with raisins, but I used green grapes, apples, walnuts, celery, and vegan mayo. And it's served over a bed of red leaf lettuce.
Posted by Bianca at 10:43 PM

Don't rush the second book :-), I would rather have 1 great cookbook that took time to write, than 5 mediocre ones that have been rushed. I loved your first book by the way!

Hi Bianca! I must agree with VeganFire on that one.

I think the quality of a book is way more important than how long it took to write it. No matter how long it takes, it is meant to take that much time and maybe after all a good cookbook is like good wine: it takes time to get better. :-P

Anyways, I am sure everyone is eagerly waiting for this cookbook. I am really curious on what it will be like and your posts make me even more curious. Still, I am patient enough to just wait. ;-)

I love club sandwiches but never make them at home. I like learning about food history and I'm looking forward to your next book.

I don't think I've had a waldorf salad since going vegan, that looks and sounds delicious!

I love this new cookbook idea! So exciting. I'm fascinated by historical food accounts - have you read The Food of a Younger Land?

I am looking forward to getting my hands on your future book. This club looks yummy.

I love recipes like these! I haven't eaten breakfast yet and that sandwich and salad are really getting my appetite going. ;/ hahah

I better try making this some time. Thanks for sharing!

P.S: I know what you mean about authors constantly putting out new books. But I'm sure that yours will be amazing when ready. :)

Slow & steady wins the race! Don't fret about it; you're making it great!
That sandwich looks gooood.

I too love this new cookbook idea - so clever! And while its not an easy task, with a theme like that to cover you (and us - your readers!) are going to learn so much!

This sandwich looks so good...literally had my mouth watering. I'm so inspired.