Last night, I told y'all about my favorite new vegan cheese cookbook, The Cheesy Vegan by John Schlimm (of The Tipsy Vegan fame!). This full-color, picture-heavy book is filled with recipes for homemade vegan cheese (made with everything from cashews and agar to tofu and nooch) and dishes using those cheeses.

I made my own cheddar from John's book and used it in his beer cheese soup over the weekend (see yesterday's post). But for those lazy vegans who don't care to spend extra time in the kitchen making cheese, John's recipes say that storebought vegan cheese works just fine. I thought I'd put that theory to the test tonight when I made the Spicy Hot Mac Attack (okay, maybe I was just being lazy, but we'll pretend it was for the sake of review). 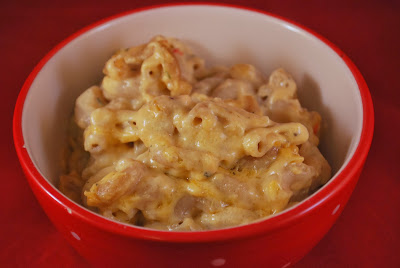 Do you see that creaminess staring out at you from your screen? I mean, can you even believe that? This is, hands-down, the creamiest mac I've ever had. Creamier than any dairy mac. Creamier than any vegan mac. The recipe calls for eight ounces (one tub) of vegan cream cheese and eight ounces (1 bag) shredded vegan cheddar. You can make your own, but I used Tofutti and Daiya.

When I first went vegan, the two cheesy foods I was most sad about giving up were pizza and macaroni and cheese. If I'd have known this recipe was in my future, I never would have worried about the latter.

The "spicy" in Spicy Hot Mac Attack refers to the habaneros in the recipe. I used two of our home-grown Peruvian habaneros plus two home-grown cayenne peppers. But believe it not, it wasn't too spicy at all. Just right.

As I mentioned last night, this book has an entire chapter devoted to mac 'n' cheese. In case you're wondering what all that chapter has to offer, here's a sampling: Creamy Seasoned Macaroni (made with cream cheese), Mac 'n' Cheese with Ground Cashews & Truffle Oil (speaks for itself, no?), Mac & Jack, Whole Grain Macaroni with Cottage Cheese and Cheddar, Two-Cheese Macaroni with Caramelized Onions (the two cheeses are vegan cheddar and feta), and of course, the Spicy Hot Mac Attack.

I enjoyed my creamy mac with a side of kale and a Creole Seitan Sausage from Cookin' Crunk. 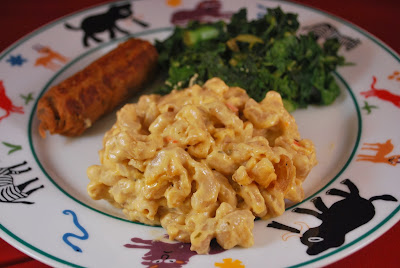 Oh damn, that looks so good. A full bag of Daiya! I usually use maybe a third to a half for a batch of mac and cheese. I might have to go for it anyway, thighs be damned.

I need to look into making my own cheese. There's a new vegan cheese purveyor here in Nashville, but it's $32/lb! However, I'm planning to sample some of it soon. If I'm hooked, I'll try to make my own. I'm just so lazy!

The creaminess is intense! I'll just pretend that this bowl of cereal is this vegan spicy mac n' cheese. ;_;

Ok seriously...it's 7:18 am and I may have to make that. The fact that there is even a cookbook called "The Cheesy Vegan" makes my heart go all a-flutter.

Oh, that just looks so amazing. And I love, love, love spicy food!!!