Tonight marked our fourth month of holding a Vegan Drinks event in Memphis! We met up at Seksui Midtown tonight for veggie sushi and cocktails.

Our group was a tad smaller than usual. We had a few no-shows and some people who wanted to come but just couldn't. But there were still 7 people, including a Vegan Drinks virgin! 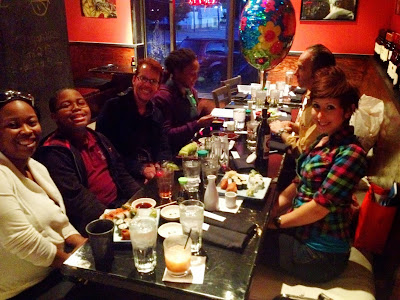 God, I love sushi. It's kinda pricey, but it's such a fun experience. I love the process of topping each roll with wasabi and ginger and dipping (okay, soaking!) in soy sauce. I love the burn as the wasabi moves through your nasal cavity. I love the warmth of hot sake and miso soup.

We arrived at 5:30, just in time for happy hour. That meant "buy one, get one free" hot sake. Like wine, some sake isn't vegan. But as I do with wine, unless I know better, I order and hope for the best. I really hope this sake was vegan because it was so comforting on a cold, crisp autumn day. 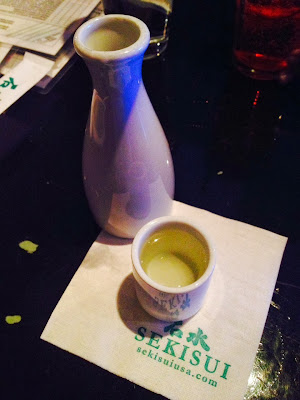 I started my meal with a hot bowl of Miso Soup, which along with the sake, helped ease the chill from my bones. It was in the 60s today, y'all. I'm so not ready for this frigid weather! 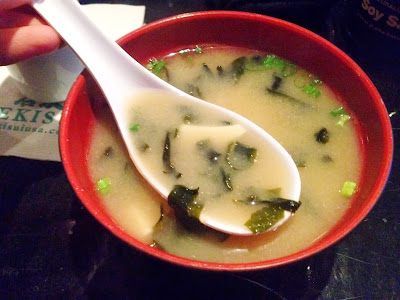 For my dinner, I went with the Vegetable Roll, the Pickled Daikon Roll, and Inari (the rice-stuffed tofu pockets). 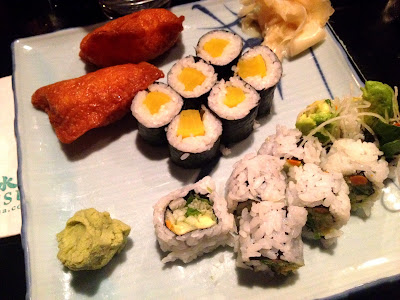 Cassi had Pickled Plum Rolls, Inari, and a Veggie Roll (but she had cayenne pepper sprinkled on hers!). 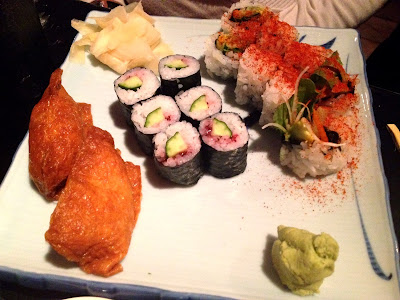 Nathan, our Vegan Drinks newbie, had the DJ Qualls (a tempura sweet potato and veggie roll named for actor DJ Qualls, who created the roll when he was in Memphis filming Hustle & Flow) and the Project Greek Fork (another veggie roll with green rice paper). The Project Green Fork is typically covered in eel sauce, so if you visit Sekisui, ask for them to leave it off. 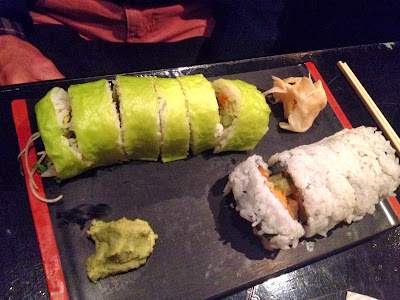 I got too busy stuffing my face and forgot to photograph everyone else's plates. But they looked similar to these.

Another great Vegan Drinks gone by!
Posted by Bianca at 9:28 PM

I'm jealous that you have a sushi place with vegan miso soup and tempura! I love tempura, but deep-frying is enough trouble that I don't usually make it for myself.

Awesome paragraph about how much you love sushi -- you just made me want to go out and pick up sushi for lunch today!!

My personal favorite is a tempura sweet potato roll. So good -- especially with lots of soy and wasabi! I also used to love the "magic sauce" or whatever creamy-based sushi sauce a lot of Japanese places offer. Since then, I've recreated the same with vegenaise, soy, and whatever else I feel like throwing in.

That sushi looks amazing! Wish we had something like that in my neck o' the woods.