I have a love affair with probiotics. Yep, that statement officially outs me as a vegan nerd. Have y'all read vegan marathoner Matt Frazier's "The 17 Weirdest Things I Do Now That I'm Vegan" on HuffPo yet? If not, you should give it a read. It's all about that weird stuff vegans like that has nothing to do with veganism (putting beans in desserts, dehydrating, drinking weird-ass smoothies etc.). Here's an excerpt:


14. Drink kombucha. It'd be really weird if we brewed kombucha and had our own SCOBY, like my buddy Jeff Sanders does, but we're not there yet. For now, I'm satisfied drinking it, something I didn't start doing until I got to Asheville, where it's made locally (like so much else). I've found the smaller and more local you get kombucha, the funkier it tastes, which I imagine is how it's really supposed to be.

Well, I guess that makes me really weird like Matt's buddy Jeff Sanders. I brew my own kombucha (here's my tutorial post). I know the science is still out on all of kombucha's health claims. But we do know one thing for sure — probiotics are good for you. And kombucha contains probiotics. But there's a new probiotic drink in town that might give good old 'booch a run for her money. 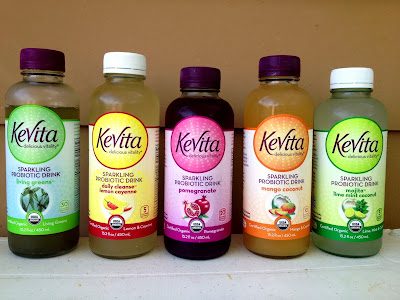 KeVita is a "sparkling probiotic drink" that's not kombucha. It's made with four strains of live probiotic cultures and apple cider vinegar, but that's about the only thing each flavor has in common. Each one has a different ingredient list depending on the flavor. Kevita sent me some vouchers so I could try their stuff out, and I picked those five flavors you see there. Each has a very uniquely different flavor profile, a fizzy mouthfeel, and because of the probiotics, there's a slight aftertaste of rejuvelac. Think champagne but with bonus health benefits!

My fave of the bunch was the Daily Cleanse Lemon Cayenne. It reminded me of a light and crisp lemon champagne with a tiny hot kick at the end. This one has cold-pressed lemon plant extract, cayenne extract, maple extract, and it's sweetened with stevia. So it's like a sparkling version of the master cleanse juice, right?

The Mango Coconut was like a fizzy version of coconut water. Plus, it has mango puree for a sweet and fruity taste. Pomegranate tasted just like a pom juice spritzer, like someone had spiked my pom juice with champagne. Both of these were sweetened with stevia.

My least favorite was the one I expected to love the most — Living Greens. I didn't dislike it, just my least fave of the five. When I saw "greens," I expected this was made with kale juice or something crazy. But it's actually green tea and a phytoalgae blend sweetened with organic cane syrup. Tasty. But it was almost too sweet. The sugar syrup means this bottle is 60 calories for the whole bottle (2 servings, but I had it all in one sitting), while the other stevia sweetened bottles range from 10 to 40 calories.

But don't let that push you away from Living Greens. It looks like there's some healthy stuff in that phytoalgae blend. Plus, there's caffeine! Bonus!

Will I give up my beloved kombucha for KeVita? No. But that's only because my home-brewing of 'booch is ultra economical (as in practically free). KeVita retails for about $3 a bottle, so it's similar in price to bottled kombucha. If I was buying my kombucha regularly, I'd definitely switch these out from time to time to keep things interesting.
Posted by Bianca at 10:03 PM

I had the mango one friday and it was delicious!

I only tried kombucha once and didn't really like it... now I'm wondering if maybe I just tried an icky brand or flavor and should give it another try!