It's not a restaurant, so all food is either delivered or picked up from their kitchen on Madison Avenue. And you have to order one day in advance, so can't be a spur-of-the-moment thing. But since I plan my meals by the week, that's no problem for me.

A couple weeks ago, I bought a Groupon for Two Vegan Sistas, so I ordered $20 worth of food to try. Bretta of Two Vegan Sistas used to work with Balewa at his cafe, and I tried a few of her dishes before. This Mock Chicken Salad was always my favorite thing to order at Balewa's, so I knew I had to get a large order of this. 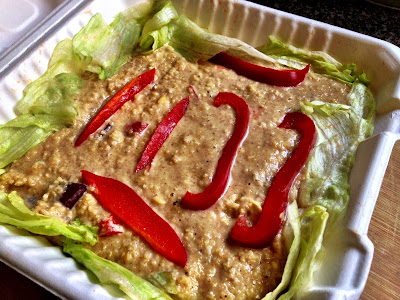 It's made with cashews, onions, and spices, and it really tastes like chicken salad. The large size order fills a whole takeout box, so it's enough for at least four meals if used as a spread. I spread mine on some slices of Ezekiel bread. 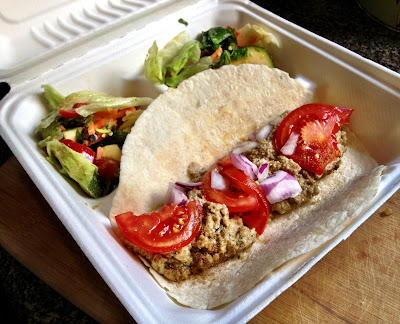 This is another nut-based dish. The falafel spread is made with sunflower seeds, herbs, and spices. And rather than serving it in falafel-shaped balls, the spread is served on a wrap. And it comes with a tasty side salad.

With all those nut-based dishes, I figured I'd better order a salad for balance. I tried to order the corn salad, but they were all out. So I ordered the Complete Meal Salad instead. 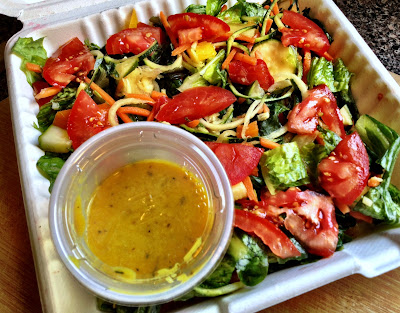 This has spiralized zucchini, carrots, tomatoes, lettuce, and nori. And it's served with a "honey" mustard style dressing. One thing to note: The salad comes all mixed together, so it's best to eat this right away. The tomato juice tends to soak into the lettuce, so it doesn't keep well. I'd planned to save this for the next day, but it was a bit soggy by day two.

I also REALLY wanted to try the Raw Oreo, but they were out of those too. So I "settled" for a delicious Live Fruit Pie. 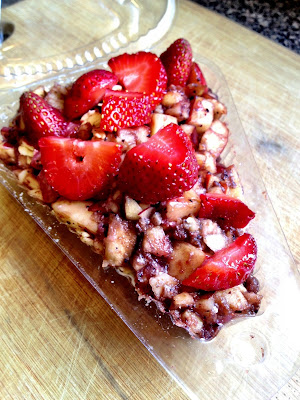 Wow! Just wow. These two vegan sistas know how to make an amazing raw dessert. There's a nut-based crust topped with fresh strawberries and apples. There may have been oats on there too. But it was really yummy. I didn't even miss the Oreo.

Wow! That food looks amazing! I wish I could try everything especially the Mock Chicken Salad. I'm intrigued by the ingredients.

Thank you!! I can't wait to try everything. I didn't know that there was a festival. I just bought my weekend pass. Will you be selling autographed books? Belinda

Hey Belinda! So glad you're coming to the fest! And thanks for making awesome food at Two Vegan Sistas. And yep, I will be signing and selling books. :-)