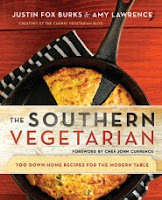 Justin and I actually work together in real life. He's a freelance photographer for the Memphis Flyer, the alt-weekly newspaper where I serve as associate editor. Long before either of us imagined we'd be food-bloggers-turned-cookbook-authors, we were going on assignments to crazy places, like the Tennessee elephant sanctuary, a haunted house in Bolivar, and the Farm in Summertown (where my publisher is ... but this was before I knew I'd ever need a publisher).

A couple years ago, Justin and his wife Amy started blogging at The Chubby Vegetarian. It started with a few pictures of the gourmet vegetarian meals Justin was whipping up for their dinners. And then they started publishing recipes on the blog, and before you know it, they had a book deal to produce a Southern cookbook.

Now, this is a vegetarian cookbook, not a vegan one. But that doesn't mean it's not loaded with naturally vegan dishes and easy-to-veganize lacto-ovo recipes. Some, like the Vegan Sloppy Joes (made with mushrooms and lentils), are already egg- and dairy-free. I tested these for their cookbook last year. 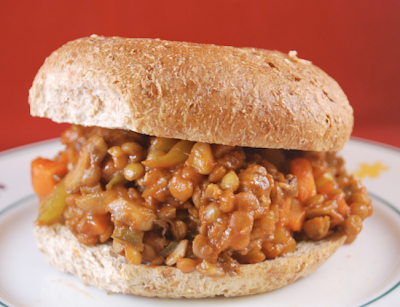 And others, like the ones I've made so far since the book came out, were super easy to make vegan versions of.

First, I tried the Sweet Potato Grits with Maple Mushrooms. 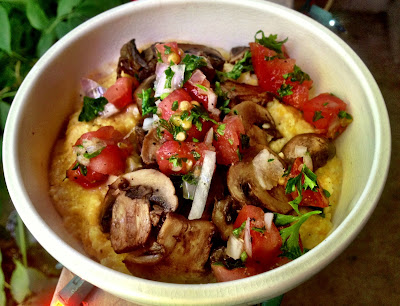 Best breakfast I've had in awhile. I've been in a cereal rut lately, and I'd forgotten how amazing a hot savory breakfast can be. These grits have mashed sweet potatoes mixed in. And then they're topped with roasted maple mushrooms and a sweet-and-tangy mix of tomatoes, shallots, and parsley.

The original recipe calls for a fried egg on top, but you can just leave that off and it's not lacking a thing.

Next up was my dinner tonight — Vegetarian "Chicken" with Parsley & Olive Oil Dumplings. 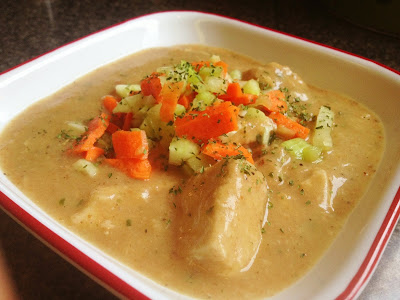 Y'all know I love me some chicken 'n' dumplins now. I've always been partial to my mama's recipe, but these are slightly different. And equally delicious (but don't tell my mama). The recipe calls for seitan for the "chicken," but I used some chopped up Beyond Meat strips in the Lightly Seasoned flavor. Beyond Meat is so realistic, it's almost creepy. Using that in this dish made it taste so much like the chicken 'n' dumplins I ate as a kid.

The dumplins, which are flecked with little bits of fresh parlsey, are dropped into the hot broth by the tablespoonful rather than rolled out and cut like my mama does. I have to admit that this method is much easier. Loved this dish. It might seem a little heavy for a summer evening, but I don't care. Just so good. Also I loved the fresh veggie garnish — chopped carrots and celery mixed with a touch of vinegar and sugar.

There are so many more recipes that I want to try from The Southern Vegetarian. For one, I must make the homemade Coconut Bacon when I run out of my stash of Phoney Baloney's brand. I tried some of Justin and Amy's coconut bacon on a vegan BLT bite at their booksigning, and it tasted EXACTLY like the Phoney Baloney's stuff that vegans (including me!) are obsessing over right now.

The Vegetarian Frogmore Stew is on my list. It's free of frogs, of course, but has their homemade Vegetarian Boudin Sausage in it! Also on the list are BBQ Tofu Pizza on a beer pizza crust, the Vegetarian Roasted Red Pepper and Olive Muffuletta, the Caprese Salad in a Jar (using vegan mozzarella, of course!), Zucchini Fries, and the Vegan Peanut Chili with Charred Corn and Avocado Salsa.

Oh, and let's not forget dessert and cocktails! Before summer is over, I must try the Spicy Cucumber-Lemonade Popsicles. And the as soon as I get a new juicer (mine broke), the Juicer Bloody Marys (made from fresh juiced tomatoes) are totally happening.
Posted by Bianca at 11:06 PM

This sounds like an awesome cookbook! I need to check it out. Great review!

We are happy to give your Mamma a run for her money! :)