Short post tonight. I have to get up at 4:30 a.m. to go running. It's the first day of my half-marathon training (I'm running the Shelby Farms Half-Marathon in October), and although I don't typically wake up that early to run, I have an early meeting at work to get to after my run.

So I'll share a couple pictures of Paul's and my ninth anniversary on Friday. Yep, nine long years. We celebrated with a casual dinner at Paul's favorite Thai place — Bhan Thai. I've done a whole post on Bhan Thai before (you can see that here), but it really is a great Thai place. Technically, it's my second favorite. I like Jasmine Thai & Vegetarian Restaurant in the Cooper-Young area the best. But Bhan Thai is a little fancier for a date night, and it has a great summer patio.

Anyway, here we are on the patio. 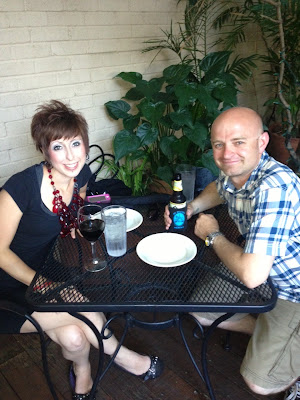 I typically order the Cashew Nut with Tofu, but Paul suggested I try the Pad Thai. He used to work at Bhan Thai, so he's had just about everything on the menu. I took his advice. I ordered Pad Thai with Tofu (hold the eggs and fish sauce). 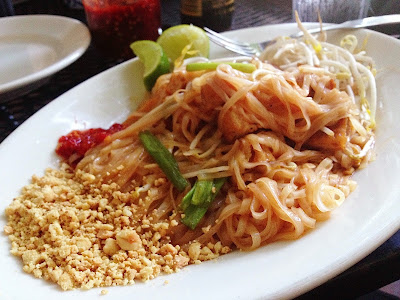 Best pad thai I've ever had! The tofu was perfectly fried. The sauce was light and flavorful. The rice noodles were just the right texture. And the peanuts and sprouts sealed the deal.

Like most Thai places, Bhan Thai uses fish sauce in many dishes, but they will happily veganize anything they can. Just avoid the curries because the fish sauce is already in the sauces they make for the curries, so they can't leave it out.
Posted by Bianca at 9:59 PM

That meal sounds so fulfilling! And happy 9 years for you two! I'm barely going on three years this coming October.
I love when places can make little alternatives for you, it's always a nice gesture and leaves me happy to know that I can eat there.

Happy anniversary! I love pad thai, but I love love even more. Here's to celebrating love!

Go girl! I'm also training-- running a half and a full marathon this fall. And I also have my very own Paul whom I'm mad about. We have so much in common :)

Happy Anniversary! 9 years is amazing! You are a beautiful couple!!

Sounds like a perfect place to celebrate the occasion! The pad thai looks delicious :)

Best of luck with the training!!

Congratulations on the anniversary and the half marathon training. That is my favorite race distance.

Happy Anniversary to you two! Looks like a really nice way to celebrate. I've always been a big fan of pad thai.

9 years - woo hoo! You guys are awesome. And pad thai is always a good choice! Hope you had a gooder!

Hi Bianca, I just found your blog as i'm searching for new vegan blogs to follow or subscribe to. I write for my own vegan blog but deffo need some outside inspiration and it's also lovely to meet other vegan's about the net :)
If you fancy seeing what I do in the world of veganism in the UK then take a look http://www.veggieeatsandothertreats.com/

Catching up on your blog and, holy cow, your hair is cute! I love the pixie cut, you rock it well. Happy 9 years!

Awww yay, happy anniversary! Me & Nick have been together for 9 years this year too!

I fell in love with tofu massaman there. You can't believe how disappointed I was to learn there was fish sauce in it. :( Glad to hear I can have the pad thai though.