Only Kale Can Save Us Now

I have a silly confession. When I was asked to participate in the blog tour for the new kale cookbook, Kale: The Complete Guide to the World's Most Powerful Superfood, I assumed Kale was a vegan cookbook. In the back of my mind somewhere, I kinda thought only vegans ate kale. Yes, writing that down makes it sound even sillier. 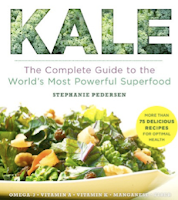 But I didn't know what kale was until going vegan. Growing up in the South, we had turnip greens and rape greens but never kale. Maybe some Southerners did. But not me. Now I proudly carry my Herbivore "Only Kale Can Save Us Now" hot pink tote, and I eat the green stuff at least once a week.

Imagine my surprise when the book came in the mail and there were meat recipes in it! In a way, I'm sort of pleased to know that everyone likes kale! It's not just for vegans! This new cookbook may not be all vegan or even all vegetarian, but there are a number of vegan kale recipes and plenty that can be easily veganized.

The book opens with a chapter on all the amazing nutrients in kale and what they do for the body. I had no idea kale had so much awesomeness — vitamins A, B2, B3, B6, B9, E, C, K and other cool stuff like fiber, protein, and omega-3s.

Like I said, the book has lots of veganizable options. I was able to veganize this Cannelini-Butternut-Kale Stew in one step — swapping the chicken broth for veggie broth. 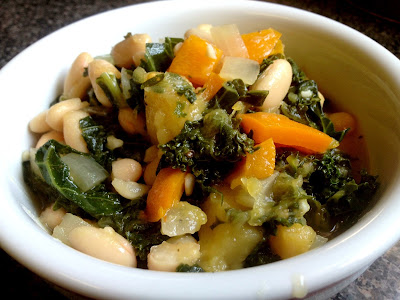 This hearty, healthy stew is clean food that I feel good about eating. You know I love my junk food, but whole foods like this make me feel good about myself and my eating choices.

Most of the stews and soups can be veganized by using veggie broth. Several of the dips are naturally vegan, like the Garlicky Kale & Spinach Dip (made with pine nuts and balsamic vinegar) or the Hearty Winter Salad (kale, potatoes, tahini, lemon juice). But watch out for meaty recipes, like the Kale Meat Pies (eeek!) or the Garbanzo Kale Soup (it has chorizo in it!). But you could always sub vegan chorizo.

The vegan recipes aren't clearly marked, so you'll have to do some hunting. But there are plenty in there. And a couple do have "vegan" in the title, like the Vegan Cocoa Kale Cupcakes (yes, kale in cupcakes ... I almost made these) and the Vegan Juicer Pulp Muffins.

If you're looking for a great gift for an omni who wants to eat a little healthier, Kale is it. And if you're an adventurous vegan who loves to veganize everything, you'll probably get a kick out of this book too.
Posted by Bianca at 10:42 PM

haha, I think I thought the same! I guess us vegans have got to share the kale love around...
I think I'd have headed straight for the cocoa kale cupcakes,though the bean stew does look tasty.

I'm always surprised these days when any recipe or cookbook isn't vegan. Using animal products is just a totally unfamiliar thing now. This is a really helpful and fair review, though.

That bean stew looks just like my last vegie soup concoction. I take whatever vegies are left and create a stew/soup in the slow cooker almost every weekend. Kale and butternut squash are perfect together.

I actually just had kale and spirulina muffins at Juice Generation in New YOrk that were the bomb diggity - honestly just tasted like sweet loveliness. So do iiiiiiiiit. ;)

I was really surprised when people started eating kale. My first job was at a Ponderosa steak house (yeah, I know, gross, obvi before I went veg!), and we used it to make the salad bar look pretty, not for eating. That was 20+ years ago though. Personally, I prefer collards, but maybe I should give kale another shot.