Coq Au Vin (and a Vacation!)

I'm off to the Bonnaroo Music & Arts Festival, so I'll be taking a blogging vacay until Monday night. I'm sure I'll have lots of vegan festival food to share since 'Roo is incredibly vegan-friendly.

Until then, I leave you with a serving of Seitan Coq Au Vin over whole wheat rotini pasta. And some English peas for good measure. 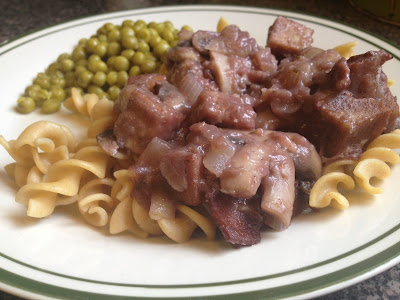 This is another recipe for my second cookbook project — veganizing trendy foods through the past century. Coq au vin (which means "rooster with wine" in French) has been around for ages, but it was popularized in America in the 1960s by Julia Child.

For my vegan version, I simmered homemade seitan with mushrooms, onions, and vegan bacon in a red wine sauce. Bon appetit!
Posted by Bianca at 9:30 PM

Have fun at the Bonnaroo festival! Can't wait to read about it. :) And thanks for sharing the yummy dish too; I better go make myself some dinner right now since this started to make me a little hungry!

The seitan looks meaty there!

Did I tell you I really like the concept of your second cookbook project? Well, I do!

Mmm, that looks delicious! Have fun at Bonnaroo...I have never gone but it seems like a lot of fun.

So jealous you'll be at bonnaroo, the lineup is so awesome this year. I have some omni friends that made the trek to work staff (about a 14 hr drive from where I'm from) that were telling me all about the sense of community that surrounds the fest, but I totally care more about the vegan finds!