This is my friend Cassi. 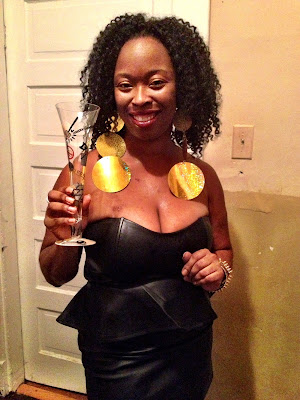 We met about a year and a half ago when we were fighting for the mayorship of Kroger on Foursquare. We started stalking one another because we're both pretty cutthroat about our Foursquare territory. This stranger stole my Kroger crown, and I was all, "Who does this bitch think she is? She. Is. Going. Down." And then we friended one another and started talking in the comments. Before we knew it, we were great friends in real life! And just a few months ago, Cassi went vegan!

Well, as long as I've known Cassi, she's been single. But she was actually married to some dude she'd been separated from for years. And she just finalized her divorce. So we had a party last Saturday night.

Cassi, Stephanie (a.k.a. Poopie Bitch), and Kristin prepared the food — all vegan, of course. Excuse my dimly lit pictures. Cassi had the mood lighting going. There were Vegan Duck Spring Rolls. 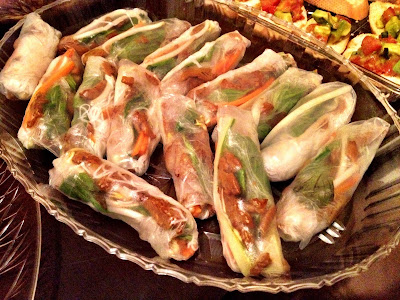 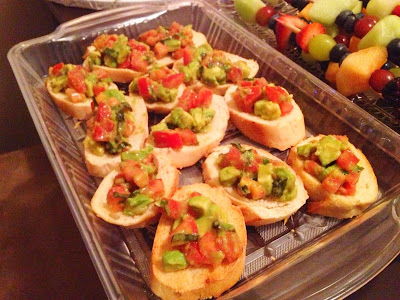 And the world's best Vegan Meatballs (I may have eaten at least 10 of these). 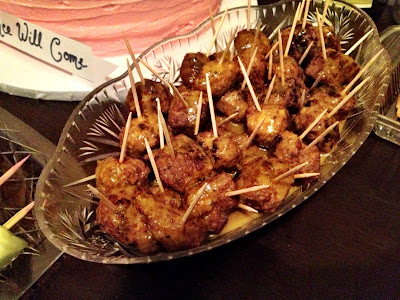 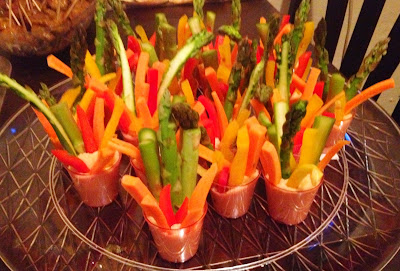 And we had Fruit Kabobs drizzled with blueberry balsamic vinegar. 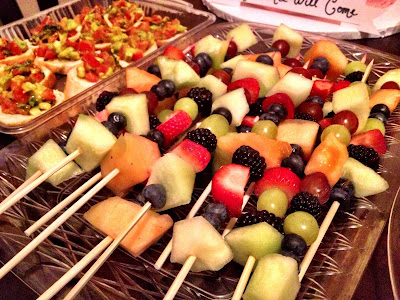 But the real star of the show was the Champagne & Chocolate Raspberry Cake that Stephanie (of Swell Baked Goods) created. Cassi requested two ethnically diverse grooms to represent the possibilities for men in her future. But I called it her gay cake. In the spirit of the Supreme Court's upcoming groundbreaking marriage equality decision this week (I'm on pins and needles, y'all), it seemed appropriate to have two grooms, right? 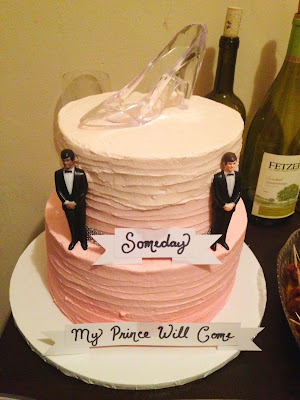 Anyway, same-sex grooms or not, it didn't really matter by the night's end. After a few glasses of wine and a ritual bonfire burning of stuff that reminded her of her ex, this is how Cassi and the cake ended up. 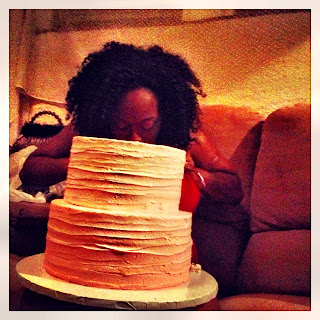 This is so fantastic! I'm totally having a divorce party - complete with cake - once mine goes through. Of course me and my ex are like besties so he'll probably be there too. =)

Oh man, this is awesome!!! I love the cake and the grooms--so great. I get super competitive with people on Yelp check-ins--mostly because many people seem to cheat--but there isn't really a comments section to chat about it. That's awesome y'all became friends!! Congrats Cassi!

Ha, this is such a great idea!!

Yay! Congrats on the divorce, Cassi! Sorry I couldn't be there to celebrate with you, but looks like an awesome party! LOVE the cake!

Guacamole bruschetta?!?!?! Are you kidding me?!!? Can't believe i've never had that! Bianca, I'm all over it!

Awesome food...and I am all about finding a good reason to throw a party

Divorce party, eh? Ha ha. Also, gay cake! So cute! And probably insanely delicious. Same goes for the rest of the appies. Hope you had a great night!

Too funny! This is a great idea!!

Oh man, I want a recipe for those meatballs!

I love everything about this party, especially the gay cake ;) Sounds like you ladies know how to party!

My divorce just got finalized yesterday, too! What a fun-looking party. And Cassi looks fab, ready to celebrate her new life! LOVE that cake.

Love the kroger competition. That is awesome. This would be my kind of divorce party. Happy for you Cassi. Good luck in the future.

This cake looks amaze!!! I love your blog! I'm new to this and would love to follow you here! But how do I do that? Thanks :)

This party looks so fun, your friends sound awesome. This is definitely the way to celebrate a divorce in style. :)

The cake sounds and looks amazing. Here's to a shiny, vegan, cake-filled future for Cassi and you all. :)

so this was by far my fav blog read of the day! Yay for Cassi and her future, and awesome reason to throw a bitchin party.

I was googling vegan and you came up. awesome fun story.