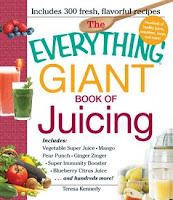 Yesterday, I wrapped up Amber Shea Crawley's whole foods-based Real Food Cleanse, my attempt at undoing the damage done by too many doughnuts in Portland. But for some crazy reason, I didn't want to stop there. I decided that it would be a good idea to forgo solid foods until dinner time today in favor of fresh juices.

For one thing, I've been meaning to review The Everything Giant Book of Juicing. And for another, I do love the way I feel the day after a juice cleanse. I picked out four juices from The Everything Giant Book of Juicing to make two times each. So I made eight large juices in all. Last night, I separated out the veggies for two juices and let them soak in the sink as a lazy way of washing. 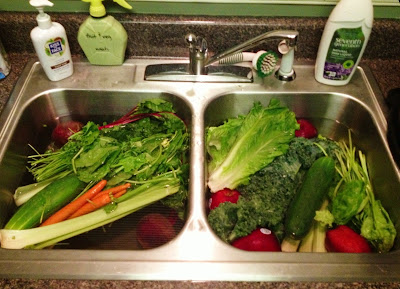 The morning started with a large hot water with lemon (something about getting the circulation going, I read that somewhere), followed by a large Energizer Juice from the book. This had apples, cucumber, celery, lemon, kale, spinach, and romaine. It was supposed to also have ginger but I forgot to buy any, and it was supposed to have fennel, but that's gross. Loved this juice! Apples make green juice tasty. 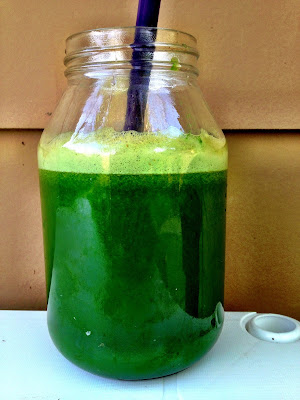 I brought two large juice jars to work as morning snacks — another Energizer Juice and this Powerhouse Juice. The Powerhouse was made with celery, parsley, spinach, cucumber, carrots, and beets. It also called for Swiss chard but only two leaves. I didn't see a point in buying chard for two leaves. I'm always a fan of beet juice, and this hit the spot. 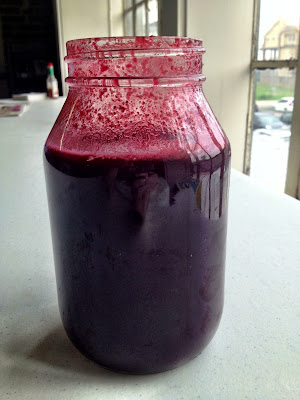 I should mention though that the Powerhouse Juice totally killed my Jack Lalanne juicer. Midway through juicing a beet, the motor just gave out. I considered giving up then and there and having a bowl of peanut butter oats instead. But then I remembered that I had a key to my friend Cassi's house and that she had a Breville. I broke in, stole her juicer, and brought it back to my house. This is what she gets for entrusting me with a key. Oh, and by the way, I learned today that the Breville trumps Jack Lalanne big-time. That Breville could juice a brick, as Cassi likes to say.

Anyway, I went home from work at lunch to make more juice. I'd prepared this sink full of veggies for my gazpacho juice. 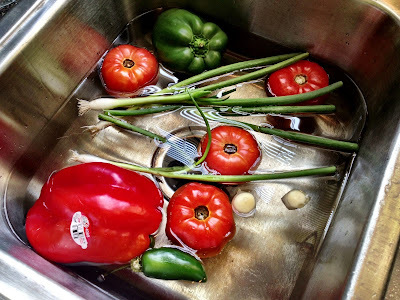 But before I made the tomato-based gazpacho juice, I had this Vampire Chaser — cucumbers, parsley, and garlic. I LOVE juices with garlic, but I'm sure the people around me don't. Oh well. This was light and refreshing with a spicy garlic kick. Sorry if I breathed on you. 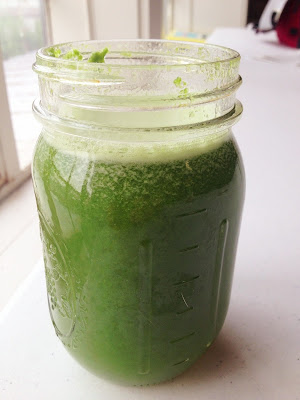 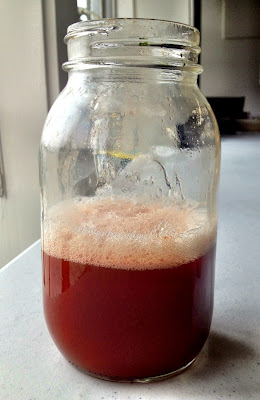 This was my very fave! I love tomato juices the best, and with the garlic and jalapenos, it was like a way fresher, less sodium-heavy Spicy V8.

By 5 p.m., I'd had seven servings of these combinations. I ended up not even needing my last jar of Vampire Chaser because I was actually full.

But before you go thinking this juice fast was easy for me, not so fast. It was hell. I drank lots of water in between juices and had a juice every time I started to feel even the slightest bit hungry. But I never felt satisfied (full, yes, but not satisfied), and around 2:30 p.m., I started to feel light-headed and weird. I decided that I must be high on vegetables.

I can't even begin to explain how happy I was when dinnertime arrived! My friends and I go to Imagine Vegan Cafe every Wednesday. I ordered their Hummus Plate, and omg, I have never been so excited about hummus. 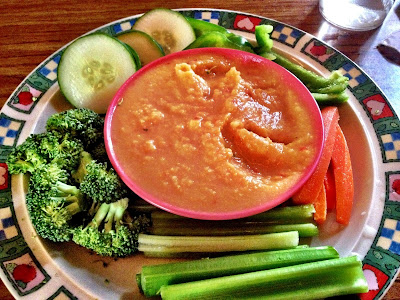 Imagine is a comfort food cafe, and they're known for pizza, chili dogs, and vegan country fried steak. Not hummus. This dish wasn't even on my radar before, but it seemed like the perfect thing to eat coming out of a juice fast.

I felt 100 times better after eating solids, but I was still hungry. So I ordered a Side Salad with Vegan Ranch. Now ranch probably isn't a good thing to have after a juice fast, but it tasted so good. And I felt like that little indulgence might be the perfect food to transition me into regular solid food tomorrow. God, I can't wait for tomorrow. I'm sure I'll feel great for having juice-cleansed, and I'll be so glad this is over. 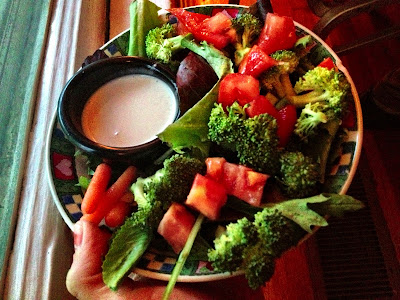 To be fair, the juices I drank were delicious. And the Everything Giant Book of Juicing is awesome. It's packed with all sorts of creative juice combos (they even juice sweet potatoes!), and juices are organized in chapters of veggie juices, fruit juices, detox and cleansing juices, anti-aging juices, cold soups, and smoothies. I'll continue to use the book but probably not for fasting. An occasional juice snack between solid meals is perfect for me.

I've successfully done two "until dinner" juice fasts before today, and I've had one total failure. Although this juice cleanse had its downs, I think it may have gone a little easier than cleanses in the past. The key for me this time was lots and lots of juice. I drank so much liquid, and I was peeing all day. But despite the lightheadedness at times, I wasn't starving like I have been on cleanses in the past. Though I'd rate this one as the most successful of my four juice fast attempts, damn, I'm glad it's over.
Posted by Bianca at 9:51 PM

I've never juiced garlic, but am intrigued for sure. I bet it makes the juice wonderful, since garlic makes just about everything wonderful.

Also, I really should try your approach of fast until dinner, because I'm not sure I could make it much longer than that.

Ooh, I am going to make my own Good Old Gazpacho. I had garlic in a juice for the first time last month in a similar concoction at a restaurant in Minneapolis, and I was crazy about it. I've only juiced garlic one time since then at home for the reasons you describe, but you know what? Sometimes you've got to just go for it. And now that summer tomatoes are here, the timing is right on.

If you end up needing a new juicer, my Hurom works great. Omega also makes one just like it. Thank goodness for a friend with a juicer!

Garlic laced juices sound awesome but I would be worried about the plastic parts of my juicer retaining that garlic smell. Did you have any issues?

Wooo Juice! I keep trying to get back on the health wagon, but then there's tacos! Next time you are in Little Rock, you should check out The Fold, it's a tapas/taco bar, and it's really fresh. Just make sure you have about 2 hours, because the service isn't great. I wrote it up on the blog.

That's awesome that you did an until dinner juice fast after completing Amber's cleanse! All of the juices sound really good. I never would have thought to add garlic to the juice but I bet it's delicious. And the dinner was a perfect way to ease out of the fast :) Thanks for the book review too, I'll have to check it out!

small town in the city said...

I have been 'borrowing' my aunt's Champion for the last three years or so. If she ever needs it back permanently, I'll definitely buy my own. It's pretty awesome.